Plants of two cultivars of african violet (Saintpaulia ionantha), ‘Michigan’ and ‘Gisela’, were brushed for 30 or 90 seconds three times per week for 5 weeks with a gloved or nongloved hand to which body lotion had been applied. ‘Michigan’ damage rating and size was more affected by brushing than was ‘Gisela’. Brushing generally increased the damage rating and decreased plant size compared with not brushing. Plants brushed with a gloved hand had lower damage ratings and were larger than those brushed with a nongloved, lotioned hand. Plants brushed for 30 seconds had lower damage ratings and were generally larger than those brushed for 90 seconds. Brushing leaves of african violets, particularly with a hand to which body lotion has been applied, is not recommended because repeated brushing can decrease plant quality and size.

Plants of two cultivars of african violet (Saintpaulia ionantha), ‘Michigan’ and ‘Gisela’, were brushed for 30 or 90 seconds three times per week for 5 weeks with a gloved or nongloved hand to which body lotion had been applied. ‘Michigan’ damage rating and size was more affected by brushing than was ‘Gisela’. Brushing generally increased the damage rating and decreased plant size compared with not brushing. Plants brushed with a gloved hand had lower damage ratings and were larger than those brushed with a nongloved, lotioned hand. Plants brushed for 30 seconds had lower damage ratings and were generally larger than those brushed for 90 seconds. Brushing leaves of african violets, particularly with a hand to which body lotion has been applied, is not recommended because repeated brushing can decrease plant quality and size.

Some consider african violets difficult to grow and maintain; however, if provided bright, indirect light, an evenly moist substrate, warm temperatures, high humidity, and regular applications of fertilizer, they will grow and flower (Kramer, 2004). Because of their brightly colored flowers and often-hairy leaves, people are attracted to african violets and often want to touch the leaves and flowers. Because growers work in conditions that can contribute to the development of dry, irritated skin, many growers use body lotions or other products to help soothe and moisturize dry skin. Likewise, many consumers use these products. Producers and consumers have questioned whether touching or brushing african violet leaves causes damage, thus reducing plant quality and growth, particularly when body lotion or other skin care products have been applied to hands before touching the plants.

Several studies have investigated the effect of various methods of mechanical conditioning, including brushing, on the growth and quality of vegetable and bedding plant transplants (Autio et al., 1994; Garner and Björkman, 1996, 1999; Garner and Langton, 1997; Latimer, 1991, 1998; Latimer and Severson, 1997; Latimer and Thomas, 1991). Mechanical conditioning was shown to be effective at temporarily reducing plant growth in most species and has been suggested as a possible substitute for chemical growth regulator application. Species and cultivar differences exist in growth response and the degree of damage caused by mechanical conditioning treatments (Latimer, 1991).

The objectives of this research were to determine the effect of brushing african violet leaves for different time periods on plant growth and quality, and whether any effect was due to the brushing process or due to lotion and other natural substances carried on hands that touch or brush the leaves of african violets.

Uniform plants of two commercially produced (Holtkamp Greenhouses, Nashville, TN) african violet cultivars were used in this study. Twenty ‘Michigan’ and 25 ‘Gisela’ plants in 4-inch-diameter pots were placed indoors under fluorescent grow lamps (40 W Gro-Lux; Sylvania, Danvers, MA) on a three-shelf light cart (Flora-Cart BA3P2; Growers Supply, Dexter, MI). Each shelf on the cart consisted of four 11-inch-wide by 22-inch-long plastic trays (Perma-Nest Plant Tray, Growers Supply Co.) placed side by side on a tubular aluminum frame. Plants were spaced to avoid any contact between adjacent plants and to allow brushing treatments to be accomplished without disturbing adjacent plants. The lights were located about 10 inches above the top of the plants. Lamps were controlled by a time clock (model TX126224; Timex, Middlebury, CT) that turned the lights on for 15 h per day. Maximum PPF was measured using an integrating quantum/radiometer/photometer (LI-188B; LI-COR, Lincoln, NE) and was 90.3 μmol·m−2·s−1 at the top of the foliage. The room was dark during the other 9 h each day. Average air temperature around the plants was 32 °C during the day and 25 °C at night. Plants were irrigated as needed (about every other day) using capillary mats placed in the bottom of the trays under the pots. Plants were fertilized about every 14 d using a soluble fertilizer that supplied about 185 mg·L−1 N from 7N–3P–5.8K [Miracle-Gro African Violet Plant Food (7–7–7); Scotts Miracle-Gro Products, Marysville, OH].

Plants of each cultivar received five brushing treatments: 1) no brushing (control), 2) brushed for 30 s with a latex-gloved (Microflex, Reno, NV) hand, 3) brushed for 90 s with a latex-gloved hand, 4) brushed for 30 s after applying lotion (Simply Basic Melon Delight Body Lotion; Wal-Mart, Bentonville, AR) to the nongloved hand, and 5) brushed for 90 s with lotion on the nongloved hand. Treatments with gloves were included to determine whether plant responses were due to brushing or due to lotion and other substances on hands that might be transferred to the leaves. Lotion was applied to hands in nongloved treatments because lotion is commonly used by growers and consumers to relieve dry, irritated skin. Fully expanded leaves of plants in brushing treatments were gently stroked by sliding the fingertips across the upper leaf surface in a circular motion (alternating clockwise and counter-clockwise) (Fig. 1). Plants were brushed for their allotted time 3 d per week (Monday, Wednesday, and Friday) starting at 1500 hr for 5 weeks. One person brushed all of the plants every time to insure consistency. The hands of the experimenter were thoroughly washed before each treatment. Lotion was reapplied after each plant within a lotion group was brushed, and gloves were changed between the 30-s and 90-s treatments in each block. Plants were not touched or moved except during brushing treatments throughout the study.

After 5 weeks, all plants were harvested. At harvest, plants were rated on a scale of 1 to 5 as follows: 1 = no damage; 2 = full plant with minimal chlorosis or necrosis, leaves not droopy; 3 = moderate chlorosis or necrosis, some droopiness of leaves; 4 = leaves necrotic and deformed, leaf abscission, poor overall appearance; and 5 = dead or near dead. Plant width was measured across the widest portion and perpendicular to the widest portion then the two measurements were averaged. The number of leaves per plant was counted then leaves with petioles were removed from the crown of the plant. Leaf area was measured using a leaf area meter (LI-3000A; LI-COR), and leaves were then dried in a drying oven at 70 °C for 7 d and weighed.

Plants were arranged in a randomized complete block design, with five blocks for ‘Gisela’ and four blocks for ‘Michigan’, and the five experimental treatments described above. Each block contained one plant per brushing treatment and species. Blocking was based on location on the light cart. Data were analyzed using PROC MIXED of SAS (version 9.1; SAS Institute, Cary, NC) with block as a random variable, and cultivar and brushing treatment as fixed variables. Contrast statements were used to determine differences among brushing treatments.

Effect of cultivar (pooled over brushing treatments) and brushing for 30 or 90 s using a gloved or nongloved hand to which lotion was applied (pooled over cultivars) on damage rating, leaf area, and leaf number of african violets. 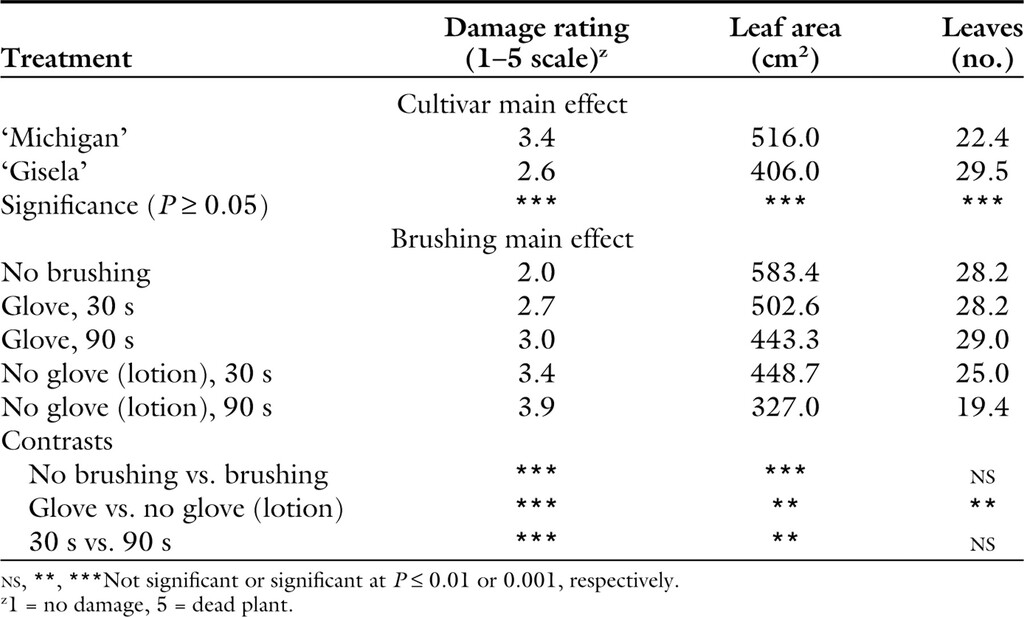 Interaction of cultivar and brushing for 30 or 90 s using a gloved or nongloved hand to which lotion was applied on leaf dry weight and plant width of african violets. 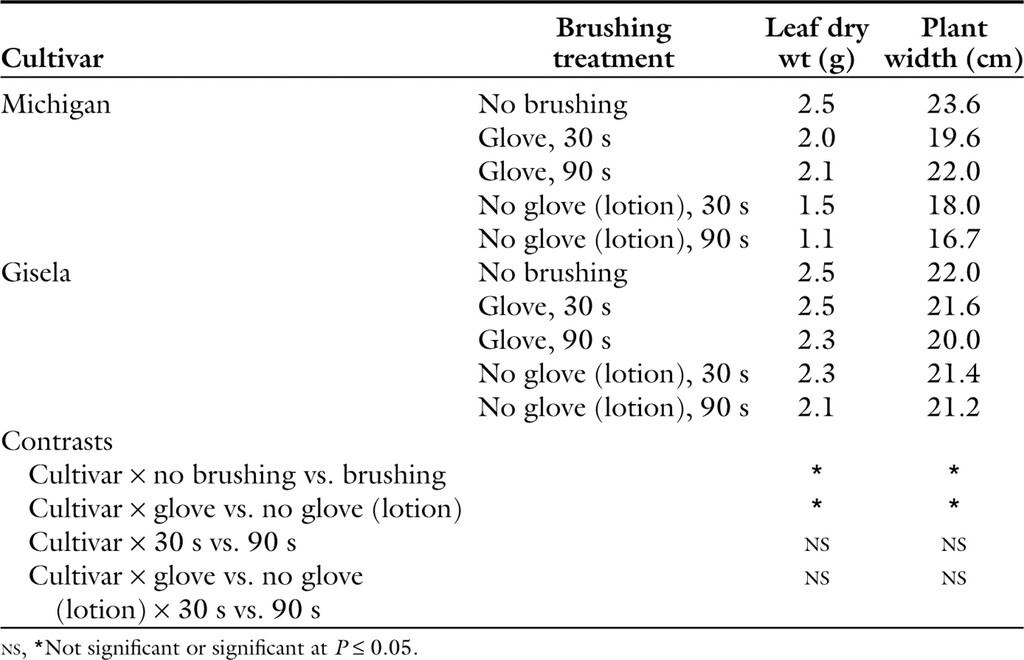 Plant response to tactile mechanical stress has been termed thigmomorphogenesis (Jaffe, 1973). Most previous research investigating the effect of brushing on plant growth and quality has been conducted on seedlings of vegetable and bedding plant species grown for transplant production. In contrast the present study investigated the effect of brushing on established, flowering african violet plants. No previous research on thigmomorphogenesis in african violets in any growth stage has been reported.

Results of this study were similar to those of previous studies in that plants that were brushed were smaller than plants that were not brushed. Autio et al. (1994) found that aster (Callistephus chinensis) had lower shoot fresh and dry weights with brushing than without after 20 d of treatment. In contrast, petunia (Petunia spp.) showed no significant responses after 19 d of brushing, but plant height, stem length, and pedicel length were reduced with 36 d of brushing. Garner and Langton (1997) noted reduced petiole elongation and shoot dry weight without causing plant damage or affecting subsequent flowering in pansy (Viola tricolor). Brushing cucumber (Cucumus sativus) transplants for 10 strokes per day for 4 d reduced final hypocotyl length by 25% (Björkman, 1999).

Previous research has not investigated the effect of brushing by hand with or without gloves to determine whether substances carried on the hands affect plant growth. Because of the cultural practices performed when producing plants, growers frequently experience wet conditions and temperature fluctuations that can lead to dry, irritated skin. Many people use body lotion or other moisturizers to reduce the discomfort of dry, irritated skin. The lotion used in this study contained many ingredients, including fragrances, substances that help relieve the discomfort of dry skin, and components that help improve the shelf life of the lotion (Table 3). These ingredients are formulated into a product that is desired by consumers. Plants that were brushed with bare hands to which lotion was applied had higher damage ratings than those brushed with a gloved hand, suggesting that the lotion or some other substance on the hand adversely affected plant quality. The substance affecting the plants may or may not have been the oils, fragrances, or other chemical compounds contained in the particular brand of lotion tested in this study or other naturally occurring substances on skin, including sweat containing inorganic cations (Hirokawa et al., 2007), amines (Hirokawa et al., 2007), and amino acids (Coltman, et al., 1966, Hirokawa et al., 2007). Hall and Jones (1961) suggested that when growth is interrupted by a stress experience, the leaf cuticular wax removed by stress or by normal weathering is not replaced fast enough to maintain normal wax levels. Some of the chemicals in the lotion or naturally occurring substances found on the skin may have affected leaf cuticular waxes in addition to the mechanical effect of brushing.

Ingredients listed on the label of Simply Basic Melon Delight Body Lotion (marketed by Wal-Mart, Bentonville, AR) and their function in skin care products as described by Cosmeticsinfo.org (2009). 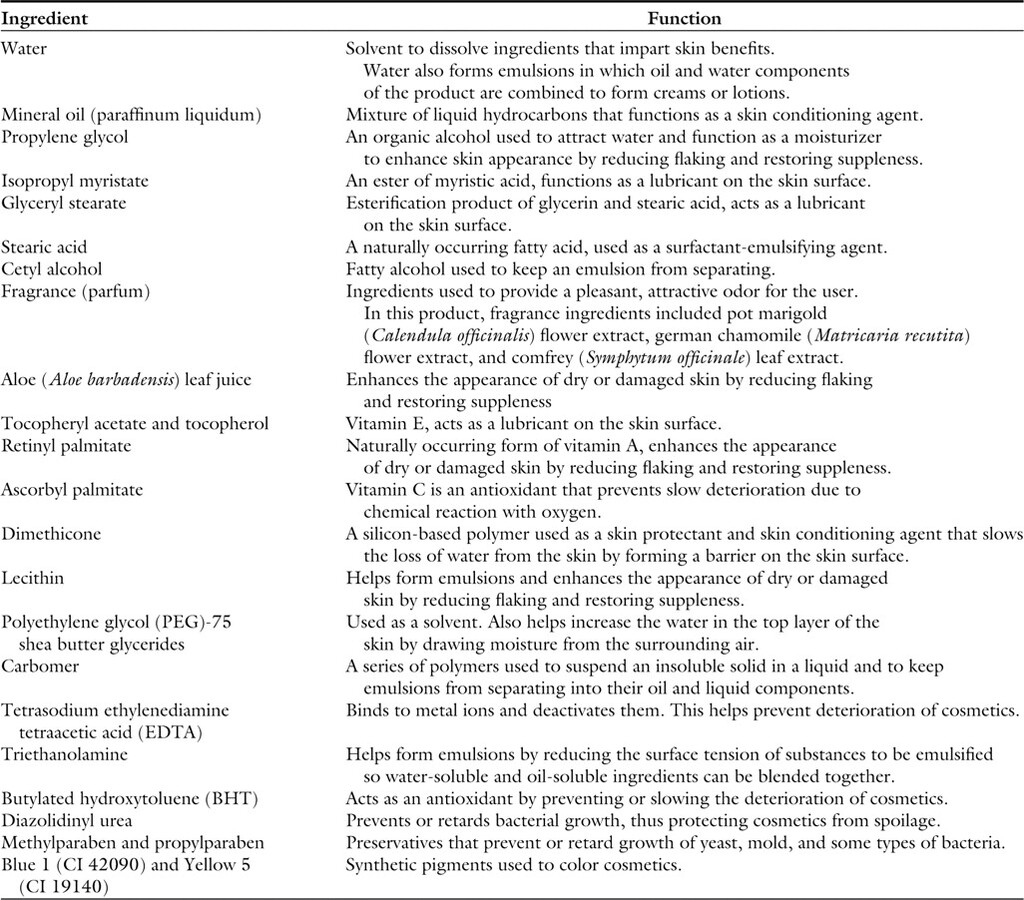 The results of this study suggest that repeated brushing reduces plant size and quality of african violets, particularly when done with a bare hand to which lotion has been applied. The cultivars varied in their response, with ‘Michigan’ exhibiting more damage from brushing than ‘Gisela’. The use of different lotions or other skin care products not tested in this study may result in different plant responses.

African violet plants were gently stroked by sliding the finger tips in a circular motion across the upper leaf surface of fully expanded leaves. 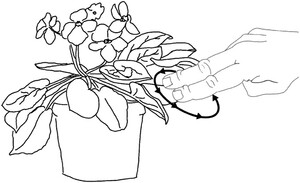