Pecan trees, like many fruit trees, have a tendency to bear fruit in cycles, consisting of a large crop in 1 or 2 years, followed by 1 or 2 years with little or no crop. This is termed alternate bearing, and is the most profit-limiting biological problem facing the profitability of pecan production (Amling and Amling, 1983; Wood et al., 2003). The inconsistent production pattern of pecan also generates supply and marketing difficulties that can have severe negative effects on the pecan industry as a whole.

Crane et al. (1934) suggested a positive correlation between kernel development and the number of leaves per fruit, with 8 to 10 leaves being required for optimum kernel quality. Fruit production has been shown to reduce return bloom (Malstrom and McMeans, 1982; Smith et al., 1986; Sparks and Brack, 1972), indicating that excessive crop production enhances alternate bearing. Some pecan cultivars have a stronger tendency to bear irregularly than do others (Conner and Worley, 2000).

Excessive fruiting is also associated with a variety of cultural problems that can reduce pecan profitability. Tree susceptibility to cold damage is reported to be increased following a heavy crop load (Reid et al., 1993; Smith and Cotten, 1985; Smith et al., 1993; Wood, 1986). Incidences of fruit disorders such as shuck decline, water-stage fruit split, and vivipary are also reported to be higher when crop load is heavy (Sparks et al., 1995; Wood and Reilly, 1999). Premature germination or vivipary can occur when green shucks fail to dehisce, and is often associated with high humidity between the shell and shuck and high air temperatures during ripening (Sparks et al., 1995).

Mechanical fruit thinning has been used as a tool to minimize the effects of alternate bearing on several cultivars, including Mohawk, Maramec, Giles, Wichita, Cape Fear, Cheyenne, Kiowa, Barton, Graking, Peruque, and Shoshoni (Goff et al., 1995; McCraw et al., 1996; Smith and Gallot, 1990; Smith et al., 1993; Sparks et al., 1995). While the optimum stage of fruit development at which to crop thin and the optimum crop load for high-quality fruit and adequate return bloom has been established for certain cultivars in Oklahoma and Kansas (Smith and Gallot, 1990; Smith et al., 1993), little work has been conducted regarding the economic value and potential profitability of fruit thinning of pecan cultivars grown in the southeastern United States. We report here the effects of mechanical fruit thinning on yield, quality, and profitability of ‘Sumner’ and ‘Cape Fear’ pecan, two major cultivars produced in the southeastern United States.

Ten 20-year-old trees of both pecan cultivars, Sumner and Cape Fear, growing in Tifton loamy sand (fine-loamy, siliceous, thermic, Plinthic Paleudult) soil in a commercial pecan orchard in Irwin County, GA, were used for the study. Trees were selected based on uniformity of size, vigor, and excessive crop load. Trees were spaced 40 × 40 ft and were drip irrigated. Trees were in good health and were managed according to University of Georgia Extension recommendations (Wells, 2007).

Treatments were replicated five times in a randomized-complete block design. Five trees of each cultivar were mechanically thinned for 8 s by trunk shaking to remove ≈30% to 40% of the fruit on each tree on 1 Aug. 2007, and five trees were nonthinned. Initial crop load for all trees was excessive in 2007 with ≥85% of terminals bearing fruit on each tree at the time of thinning. Fruit were in the late liquid endosperm stage and the ovule was fully expanded. Mechanical thinning used a tree shaker with a hydraulic shaker head (Orchard-Rite, Yakima, WA).

Crop load was estimated in July 2008 by counting 50 random terminal branches on each side of the tree at midcanopy level for each tree and dividing the number of fruiting terminals by the number of terminals counted. At harvest, yield was estimated by shaking trees and measuring the weight of nuts in a wedge-shaped grid consisting of 1/100 of the area beneath the tree (Conner and Worley, 2000). This measurement was replicated four times for each tree, the weight summed, and multiplied by 25 to obtain the total tree yield. Only nongerminated, marketable nuts were used to measure yield. A 50-nut sample was collected from each tree for analysis of the percentage of kernel. Nuts were shelled and the percentage of edible kernel was calculated by dividing the kernel weight for the 50-nut sample by the total nut weight. The average Georgia kernel price for each cultivar was used to calculate value of the crop (U.S. Department of Agriculture, 2009). Average kernel price in 2007 was $2.09 and $2.11 for ‘Cape Fear’ and ‘Sumner’, respectively. In 2008, average kernel price was $2.81 for ‘Cape Fear’ and $2.78 for ‘Sumner’. Average kernel price for each cultivar by year was multiplied by the percentage of kernel. This number was then multiplied by tree yield to obtain crop value per tree.

Vivipary was measured in ‘Cape Fear’ pecan following tree shaking by counting all fruit within a 17.25 × 24-inch grid, counting the number of prematurely germinating nuts, and dividing by the total number of nuts in the grid. Grids were placed randomly at three locations beneath each tree.

Differences between measured parameters for thinned and nonthinned trees were analyzed by Fisher's F-test at P ≤ 0.05. 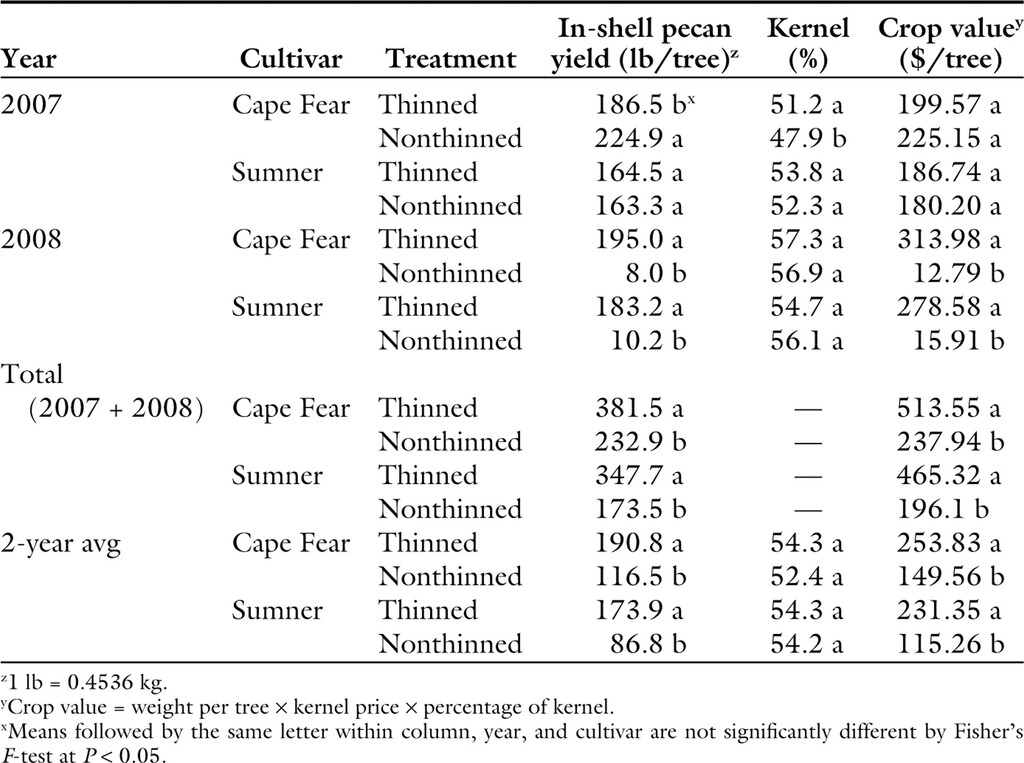 In-shell yield of ‘Sumner’ was unaffected by mechanical fruit thinning in 2007 (Table 1). This is likely the result of water-stage fruit split, which occurs when the ovary wall (shell), underlying testa (seedcoat), and sometimes the involucre (shuck) splits about the time of the initiation of kernel (cotyledon) filling and shell hardening, resulting in abortion and subsequent drop of damaged fruit about 7 d after splitting (Wood and Reilly, 1999). This likely occurred 7 to 10 d following rainfall events recorded for 7 and 8 Aug. 2007 at a University of Georgia weather station located about 19.0 miles from the study site. Fruit would likely be approaching the water-gel transition at this time. Water-stage fruit split may cause nut loss of over 30% (Worley and Taylor, 1972). Although water-stage fruit split was not measured in this study, the malady was observed on the ‘Sumner’ trees in 2007. Visual observations indicate that fruit split was more severe on nonthinned ‘Sumner’ trees than on mechanically thinned trees. Water-stage fruit split is often severe on thin-shelled cultivars, including Sumner, and can be decreased by reducing the crop load (Wood and Reilly, 1999). While fruit drop from water-stage fruit-split reduces the current year's crop, it likely occurred after flower induction; therefore, presence of the fruit may have been sufficient to suppress return bloom even though the endosperm and embryo were dead. Mechanical fruit-thinning had no effect on ‘Sumner’ percentage of kernel or crop value in 2007 (Table 1).

Mechanical fruit thinning in 2007 led to a higher percentage of fruiting shoots for both cultivars in 2008 (Fig. 1). Mechanical thinning increased in-shell yields for ‘Cape Fear’ and ‘Sumner’ in 2008, as well as for the 2-year combined and 2-year average yields (Table 1). In 2008, the percentage of kernel of ‘Cape Fear’ and ‘Sumner’ was unaffected by mechanical thinning. Similar results were observed for the 2-year average percent kernel (Table 1). The 2008 crop value, 2-year combined crop value, and 2-year average crop value of both cultivars was greatly enhanced by mechanical fruit thinning in 2007 (Table 1). Premature germination of ‘Cape Fear’ pecans were reduced from 34% to 4% with mechanical fruit thinning. Our study supports previous work suggesting that premature germination is accentuated by fruiting stress (Sparks et al., 1995).

In summary, the OFF year return crop and return crop value of ‘Cape Fear’ and ‘Sumner’ was increased by mechanical thinning in the ON year. This enhanced the total 2-year value and 2-year average value of both cultivars. Increased profitability of these cultivars with mechanical fruit thinning results primarily from higher yields and prices in the OFF year of production, which offset any loss in yield and/or crop value generated by fruit thinning in the ON year.

Proportion of fruiting shoots in July 2008 for ‘Cape Fear’ and ‘Sumner’ pecan trees following mechanical fruit thinning in 2007. Columns with different letters are significant by Fisher's F-test at P < 0.05. 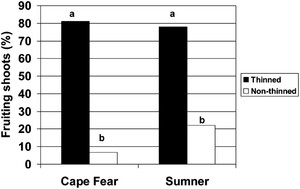