The state of Florida is the second largest producer of ornamental plants in the United States, with total industry sales in 2005 estimated at $15.2 billion (Hodges and Haydu, 2006). The use of ornamental grasses in median strips, parking lot borders, and for erosion control on slopes has become increasingly popular over the years. Modern grass cultivars offer a broad range of characteristics to choose from, such as flowering time, panicle size, leaf width and color, and plant form. Of the many ornamental Poaceae genera, Pennisetum is among the very popular (Darke, 1999; Gilman, 2007; Grounds, 1998). Desirable attributes of Pennisetum are its long flower cycle and adaptability to a range of landscape conditions; yet a consequence of this is its ability to self-seed and readily naturalize in areas far beyond its planting. Introduced to Hawaii in 1914, green fountain grass has since escaped cultivation in eight states (U.S. Department of Agriculture, 2008), including Florida (three counties) (Wunderlin and Hansen, 2008). It is listed as invasive in California and Arizona, and as a noxious weed in Hawaii (Poulin et al., 2007; Staples et al., 2000; USDA, 2008; Williams et al., 2002). As an extremely aggressive colonizer, it is also problematic in other parts of the world including, the Canary Islands, New Zealand, and Australia (Csurhes and Edwards, 1998; Pacific Island Ecosystems at Risk, 2007).

Florida's Exotic Pest Plant Council (FLEPPC) lists green fountain grass as a Category II invasive, indicating that it has increased in abundance or frequency, but has not yet altered Florida plant communities to the extent shown by Category I species (Florida Exotic Pest Plant Council, 2007). In 2003, The University of Florida (UF) Institute of Food and Agricultural Sciences (IFAS) Status Assessment of Non-native Plants (Fox et al., 2008) suggested that green fountain grass is not currently a problem species in Florida's natural areas, although it was documented in undisturbed natural areas in central Florida. These conclusions were footnoted to emphasize that there was insufficient evidence to fully validate the statement (Fox et al., 2008).

Nomenclature and plant description of 10 fountain grass species and cultivars. Plant hardiness zone is based on the U.S. Department of Agriculture zone map (USDA, 2003), as referenced by Loewer (2003) and Greenlee (1992). Plant form is based on categories described by Greenlee (1992). Foliage and inflorescence descriptions are based on observations in Florida. 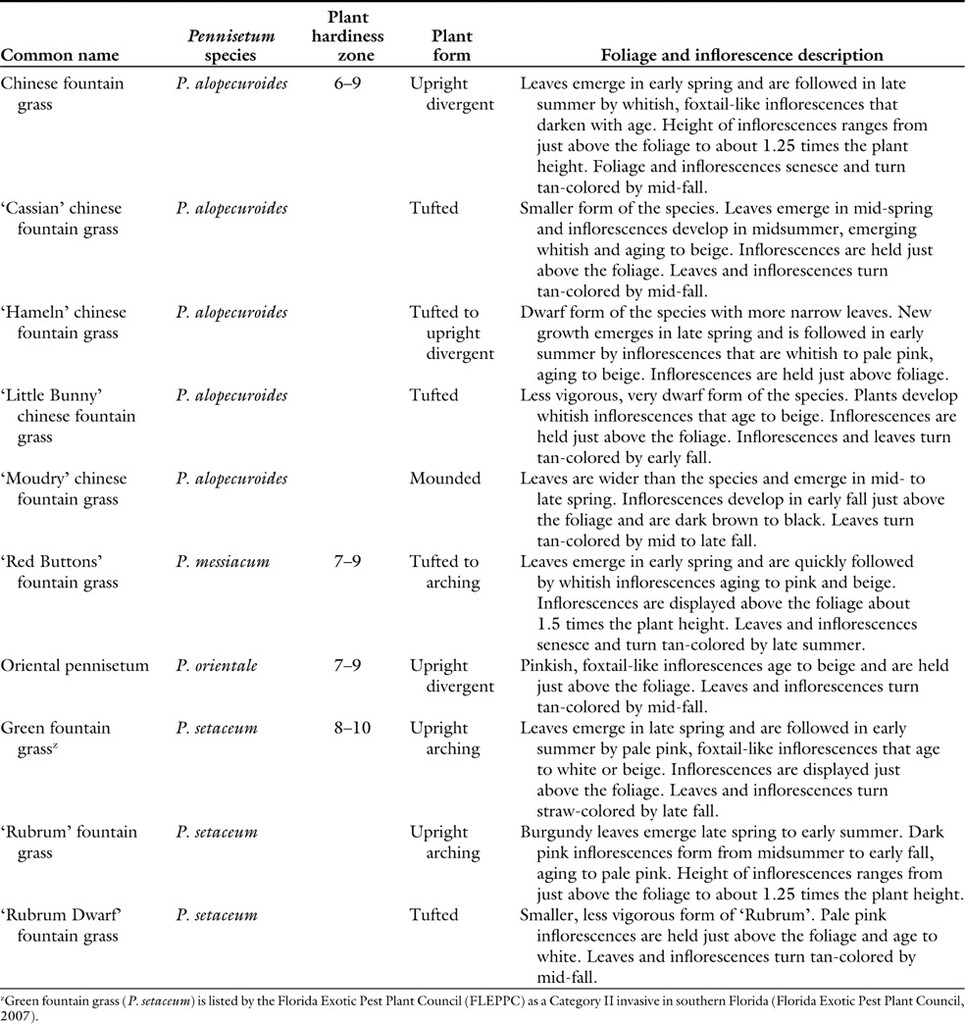 Visual quality (plant color and form) was assessed monthly by three individuals for each cultivar independently at each location. Assessments of foliage color and form were performed on a scale from 1 to 5 where 1 = poor quality, not acceptable, severe leaf necrosis or yellowing, 2 = fair quality, marginally acceptable, some areas of necrosis or yellowing, 3 = average quality, adequate and somewhat desirable form and color, 4 = good quality, very acceptable and desirable color and form, and 5 = excellent quality, very desirable landscape performance. On 15 Feb. 2004, plants at each location were cut back to 6 to 8 inches aboveground in accordance with industry standards. Values for the highest rating, peak month, and cumulative average rating were generated from data collected during monthly evaluations (not presented).

Monthly assessments of flower coverage (percentage of flower spikes in relation to foliage) were performed on a scale from 1 to 5 where 1 = 0% (no flowers present), 2 = 25%, 3 = 50%, 4 = 75%, and 5 = 100% (maximum canopy coverage). Following peak flower production (a time determined when greater than half of the inflorescences faded and were fully mature), the total inflorescence number per plant was recorded at each location. At the termination of the study (week 84, 13 Jan. 2005), growth indices were calculated for each plant as an average of the measured height (measured from crown to natural break in foliage) and two perpendicular widths. Crown circumference was measured 1 inch above the soil level.

The field experiments were conducted similarly in northern and southern Florida. A randomized complete block experimental design was used with 10 cultivars placed in three-plant plots replicated three times (blocks). Visual quality and flowering data were collected monthly for each replication. At 84 weeks, growth data were collected on each plant sample. Each experiment was subjected to analysis of variance, and significant means separated by least significant difference at P = 0.05.

Maximum visual quality rating, peak time (based on plant color and form), and overall average rating of 10 fountain grass species or cultivars grown in northern and southern Florida for 84 weeks. 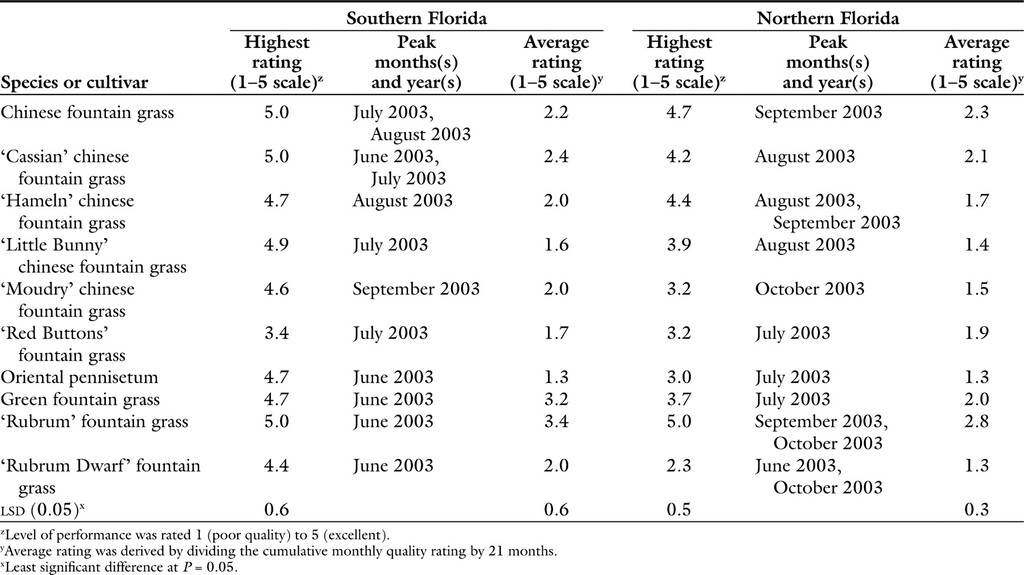 In northern Florida, frost killed aboveground portions of all plants during both winters. Peak visual quality values were recorded from June to October of the first growing season and were generally high (good to excellent) among cultivars, with the exception of ‘Moudry’ chinese fountain grass (P. alopecuroides), ‘Red Buttons’ fountain grass, oriental pennisetum, and ‘Rubrum Dwarf’ fountain grass, which had slightly lower peak ratings (3.5 or less). ‘Rubrum’ fountain grass had the highest average visual quality rating in northern Florida, indicating that it performed better for longer than the other cultivars (Table 2). 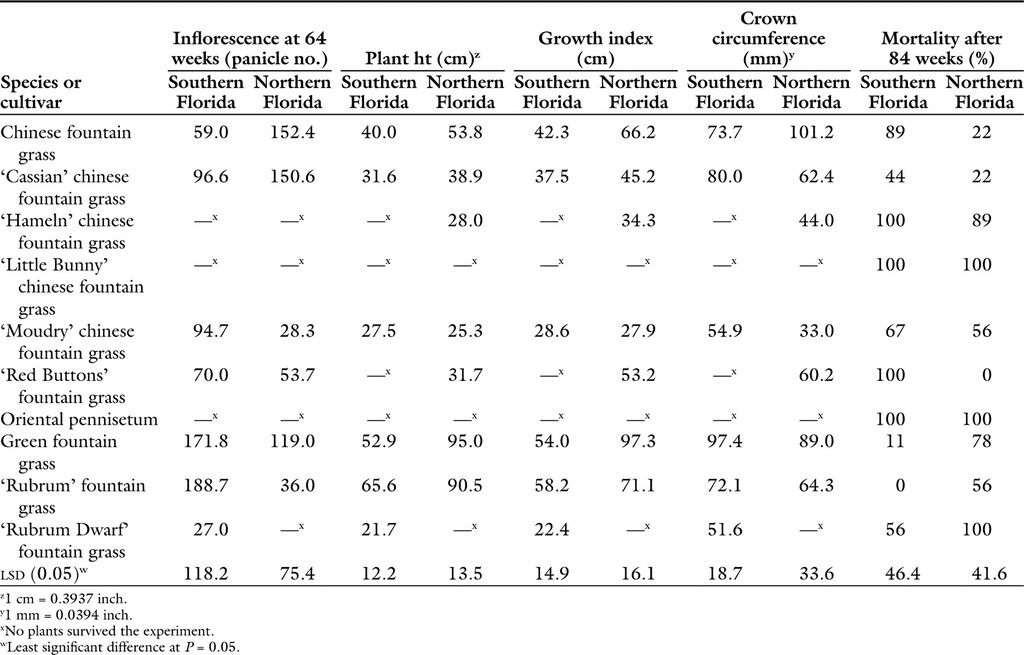 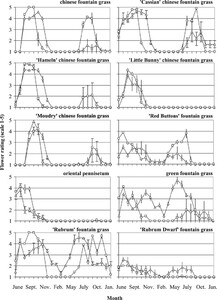