In a 1995 Regional Plan Association poll, two key factors of an acceptable quality of life were safe streets and access to greenery or open spaces (Trust for Public Land, 2008). Residents of urban environments with higher concentrations of green areas feel safer, have an increase in social contact with each other, an increase in communication among neighbors (Kuo and Sullivan, 2001a; Waliczek et al., 1996), and have reduced feelings of mental fatigue among citizens (Kuo and Sullivan, 2001b). The results of a research study performed by Kuo and Sullivan (2001a) indicated that apartment buildings surrounded by greenery in poor, urban areas were less prone to crime when compared with those that were barren of greenery.

Urban residents in cities across the United States have created usable green space in vacant lots in the form of community gardens when green spaces such as parks and greenbelts were limited. According to the American Community Gardening Association (ACGA), there were an estimated 150,000 community gardens in 2004 (ACGA, 2004). In areas surrounding community gardens, researchers have found signs of neighborhood stabilization such as an increase in owner-occupied dwellings, an increase in residents' incomes overall from attracting people with higher incomes, and rent increases in areas surrounding community gardens (Whitmire Study, 2008). Research has indicated that people can derive many quality-of-life benefits from being involved in a community garden such as social, self-esteem, and safe environment needs (Waliczek et al., 1996). For many, the act of building and maintaining a community garden can become a tool to empower neighborhood residents against urban blight and crime. Additionally, some people have reported that urban lots that were once trash-strewn eyesores and magnets for criminal activity have become havens of safety that provide valuable interaction among neighbors. This, in turn, can contribute to a perceived reduction in crime (Hynes, 1996). In support of this idea, the Trust for Public Land in New York City manages 64 active community gardens and has stated that “The gardens attract new residents, restore neighborhood vitality and stability, enhance civic pride and even reduce local crime.” (Trust for Public Land, 2008)

A panel of experts from around the United States was formed by the ACGA to create a research agenda designed to guide future community garden research (ACGA, 1992). Among the subjects identified as important research topics were issues associated with security and safety such as vandalism and a community garden's potential impact on crime and crime statistics (ACGA, 1992).

The city of Houston was selected because it is a large urban area with a suitable number of community gardens to sample and property crimes were present at measurable rates.

Each month contained a list of reported crimes, including violent crimes and property crimes. All violent crimes were deleted from the spreadsheet so that only property crimes (burglary, theft, and auto theft) remained. Property crimes were used for this study because, according to the Federal Bureau of Investigation (FBI), the majority of crimes that occurred nationally were property crimes (FBI, 2004). Anecdotal information on the benefits of green spaces indicated that these types of crimes would be most influenced by the presence of a community garden (Snelgrove et al., 2004).

The spreadsheets containing the edited crime data and the community garden addresses were sent to a San Antonio, TX, company called GeoSpatial Training Services where the data were geocoded to create a shapefile. Geocoding refers to the process in which an address is given an x/y (latitude/longitude) coordinate. A shapefile is “a set of files that contain a set of points, arcs, or polygons (or features) that hold tabular data and a spatial location used in ArcGIS 9.1© software” [Environmental Systems Research Institute (ESRI), Redlands, CA] (City of Fort Collins, 2007). Addresses were obtained using a nationwide street map database. The shapefile contained a single point for each address that was geocoded.

The gardens were geocoded and overlaid onto a Houston city map. A 1/8-mile radius was created around each community garden. Property crimes that fell within that area were mapped. One-eighth mile was chosen because it is walking distance from the garden and was likely to be visible to passers-by.

A 1-mile radius surrounding the garden was also determined and mapped. A 1-mile radius was used because the area was likely to be within the same neighborhood as the community garden and demographics were likely to be similar. Five points within this area were randomly placed (Fig. 1). A 1/8-mile radius was created surrounding each of those five random points. Property crimes within each of those random areas were tallied (Fig. 1).

Demographic data for each garden and each random point surrounding the community gardens were compared using descriptive statistics, as well as paired t tests to determine any statistically significant differences in demographics for all of the areas.

Further analysis was conducted between community garden areas and their respective randomly selected areas for which statistically significant differences were revealed after the initial analysis.

Six of 11 gardens responded to interview questions. Missing information pertaining to each garden was obtained through garden websites created by Urban Harvest, a Houston-based organization that provides support to community gardens (Urban Harvest, 2008), and researcher observation. Researchers visited each site to determine that the gardens were active and to observe notable garden surroundings such as neighborhood conditions and garden visibility.

The selected gardens appeared to represent many of the different demographic possibilities typical of an urban area in the United States, with some of the gardens being located in residential areas and others existing in commercial areas. Ten of the 11 community gardens appeared active and established. SEARCH Community Garden appeared inactive for at least one spring gardening season during the study. Alabama Community Garden and Julia C. Hester House Community Garden were the oldest gardens that were included in this research project, each having been established for over 20 years. 17th Street Garden, established in 2004, was the newest garden. Most of the gardens were founded by an individual, a civic club, or an organization. All gardens appeared to have established support within their communities regardless of the founding entity. Six of the 11 community gardens confirmed that they held special functions and/or workdays. Two garden representatives stated that they did not have special functions or workdays because an individual was responsible for most of the garden operations.

Community gardens in this study received funding for upkeep and maintenance from various sources. Funding sources included United Way, Urban Harvest, neighborhood associations and civic clubs, plot rental fees and donations, as well as some that were individually funded.

Eight of the 11 community gardens in this study prompted reactions from passers-by and/or seemed to be influential in their communities. Six of the 11 community garden respondents noted changes within their neighborhoods since the inception of the garden. Changes included cessation of illegal activity such as dumping and/or drug activity, increased property values, increased neighborhood redevelopment, and increased immunity from crime.

Interview responses and information gathered through the Urban Harvest website (Urban Harvest, 2008) indicated that the community gardens used in this study were established and visible enough to have had a possible effect on their communities. Most of the community gardens were placed in such a way as to be visible from the street and to passers-by. Exceptions included Levy Park/Upper Kirby Community Garden, which was obstructed by tall office buildings and fences, and El Shaddi Community Garden, which was located behind a small clubhouse. According to interview responses, Levy Park/Upper Kirby Community Garden was used by local businesses and likely gained notice due to the weekly farmer's market. El Shaddi Community Garden, although blocked by the clubhouse, displayed a large sign visible from the street.

Results of the initial linear regression analysis indicated that the presence of a community garden was not a predictor of property crimes in neighborhoods (P = 0.447) (Table 2). A second linear regression analysis was conducted after removing the randomly selected areas that were demographically different from their particular community garden areas. Results indicated no statistically significant differences. Therefore, in this particular study, the presence of a community garden did not appear to be able to be used as a predictor for the number of property crimes for an area (Table 3).

Results of a linear regression analysis using community garden presence as a predictor and number of crimes as a dependent variable in the study of the effect of community gardens on numbers of property crimes in urban Houston.

Results of a linear regression analysis after removing demographically less similar random neighborhood areas using community garden presence as a predictor and number of crimes as a dependent variable in the study of the effect of community gardens on numbers of property crimes in urban Houston.

While anecdotal evidence has pointed to a reduction in crime surrounding community gardens, this research did not support the premise that the presence of a community garden can lead to lower levels of property crime or that the presence of a community garden can be used as a predictor for the numbers of property crimes. However, through interviews with community garden coordinators, this research found that eight of the 11 community gardens in this study prompted positive reactions from passers-by and/or seemed to be influential in their communities. Six of the 11 community garden respondents noted neighborhood changes such as the cessation of illegal activity, including dumping and/or drug activity, increased property values, increased neighborhood redevelopment, and increased immunity from crime. Therefore, though the actual numbers of property crimes did not indicate a difference, residents and/or users of the community garden areas perceived a safer neighborhood. This information supported other studies that found that signs of neighborhood stabilization may often lead to a perceived reduction in crime (Skogan, 1990). Observation by community organizations and some research suggests that solutions to negative inner city conditions can be influenced by residents. Promotion of the development of community gardens could be one type of grassroots organizing that could help alleviate these problems (Trust for Public Land, 2008). In community gardens, residents may be cultivating feelings of well-being and safety by coming together and performing peaceful acts such as gardening. Community gardening, while not necessarily being a cure for crime, may foster further revitalization and community improvements (Whitmire Study, 2008).

Further research using larger sample sizes is recommended. The sample size in this pilot study was too small to generalize to the overall population. Results were also limited to 2005 because crime data were only collected from that year. Researchers recommend that future studies use crime data from several years. Researchers also recommend administering questions to people not directly involved in garden activities in regard to their perceptions of the community gardens influence on the neighborhood. Researchers also recommend the use of mapping technology in future studies. 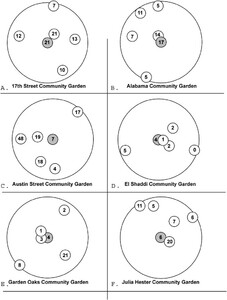 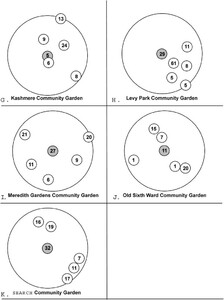