Onion is an important crop in Georgia, with a farm gate value over $125 million in 2005 (Boatright and McKissick, 2006). This important commodity is produced in southeastern Georgia in the Vidalia-growing region, which is protected by Federal Market Order 955 (Boyhan and Torrance, 2002). This high-value crop is produced from transplants on-farm in high-density plantings (Boyhan and Kelley, 2007). Onion seeds are sown in September at a rate of 800,000 to 2,000,000 seeds/acre. These plants are grown for 8 to 10 weeks at which time they are harvested and transplanted to their final spacing of 60,000 to 80,000 plants/acre.

Using transplants for onion production is labor intensive and is not practiced in all onion-producing regions. A number of different aspects of transplant production have been investigated concerning onions. Al-Abdulsalam and Hamaiel (2004) investigated planting date and fertilizer and found that 20 Oct. was the optimum planting date with moderate fertilizer application in comparison with 20 Sept. or 20 Nov. transplanting dates in Al-Hasa, Saudi Arabia. In another study from the Middle East, El-Rehim et al. (1997) found that at the Shandaweel Experiment Station, Egypt, the best yields were with transplants set on 15 Nov. compared with 5 Feb.

Sowing date was shown to have an effect on onion production in Louisiana, with the best yields for onions sown on 3 Oct. compared with 23 Sept. or 10 Oct., with the former planting date resulting in increased bolting (Mulkey and Talbot, 1991).

Fall-planted onion sets had greater losses compared with spring-planted sets, with temporary plastic covers having no effect on yield in Poland (Tendaj and Gruszecki, 2002).

There were several objectives for these experiments. One objective was to determine how long onions could be transplanted after transplants were judged ready, while still having good yields of quality onions. Onion transplants are ready in 8 to 10 weeks from sowing, but typically require 8 weeks or longer for the entire onion crop to be transplanted. In addition, onions with a propensity for double bulbs were evaluated for the effect of sowing and transplanting date on reducing this phenomenon.

All experiments were conducted at the Vidalia Onion and Vegetable Research Center in Lyons, GA (lat. 32°11′N, long. 82°17′W) on a Tifton soil (fine-loamy, siliceous, thermic Plinthic Paleudults). The experimental design in all experiments was a randomized complete block design with four replications.

All seeds were sown on high-density plant beds according to University of Georgia Cooperative Extension Service recommendations (Boyhan and Kelley, 2007). Beds were prepared on 6-ft centers with four twin rows planted per bed. There were 12 inches between the twin rows and there was 1 cm in-row for each of the twin rows, resulting in ≈60 seeds per linear foot of row (about 240 seeds per linear foot of bed). All harvested transplants had 50% of their tops removed before transplanting as bareroot plants.

All plants were transplanted to a final spacing of 5.5 inches in-row and 12 inches between-rows. Four rows were planted on beds prepared on 6-ft centers. Each experimental unit was 20 ft of planted bed.

All onions were harvested when judged mature for that variety except for the 2003–04 experiment. Criteria for judging a variety mature was based on bulb size, weakness in the neck, and/or plants broken over at the neck. The tops and roots of harvested bulbs were immediately removed and total yield was recorded for each experimental unit. Onions were then heat cured with forced air for 24 h at 95 °F and were then graded into jumbo- (≥3 inches diameter) and medium- (≥2 and <3 inches diameter) sized onions according to U.S. Department of Agriculture (1995) standards.

Data from all studies were analyzed with Excel (version 11.3.5; Microsoft, Redmond, WA) and Stata (version 10.0; StataCorp, College Station, TX). Count data (seedstems and doubles) were transformed with square root (x) before analyses and reported values were back-transformed to their original units.

Effect of transplant date with short-day onions on yield, graded yield, seedstems, and doubles for ‘Sweet Vidalia’ in the 2003–04 season at Lyons, GA.z 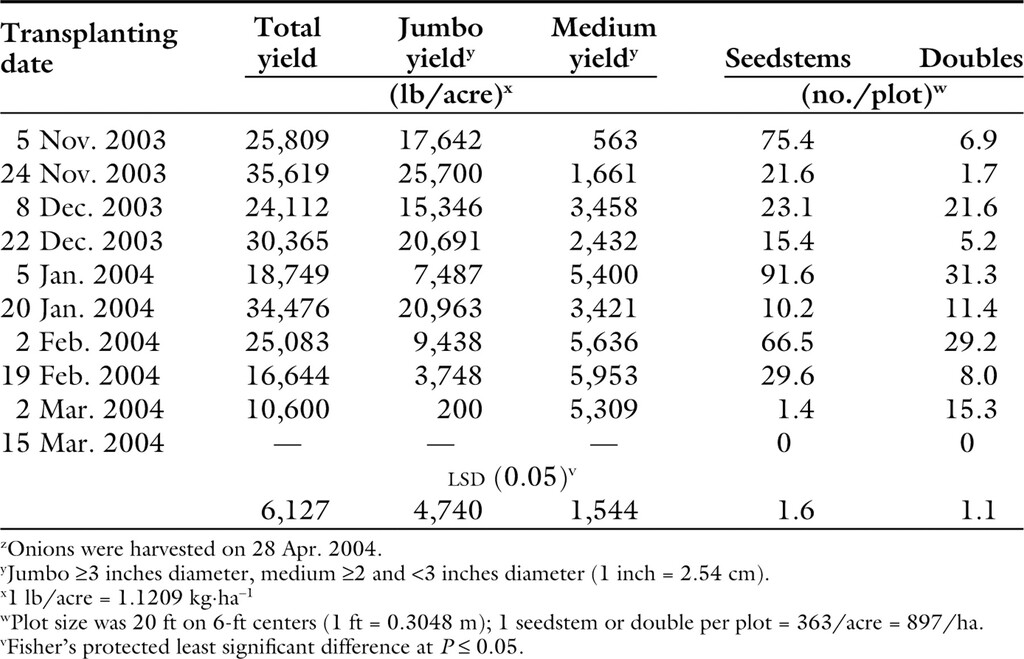 Onion seedstems (flowering) and doubled bulbs were counted on 5 Apr. 2004. All onions were harvested on 28 Apr. 2004 when onions transplanted on 2 Mar. 2004 were judged mature.

Effect of transplanting date, for short-day onions, on yield, graded yield, seedstems, and doubles with varieties Sugar Belle, Sweet Vidalia, and Pegasus in the 2004–05 season at Lyons, GA. 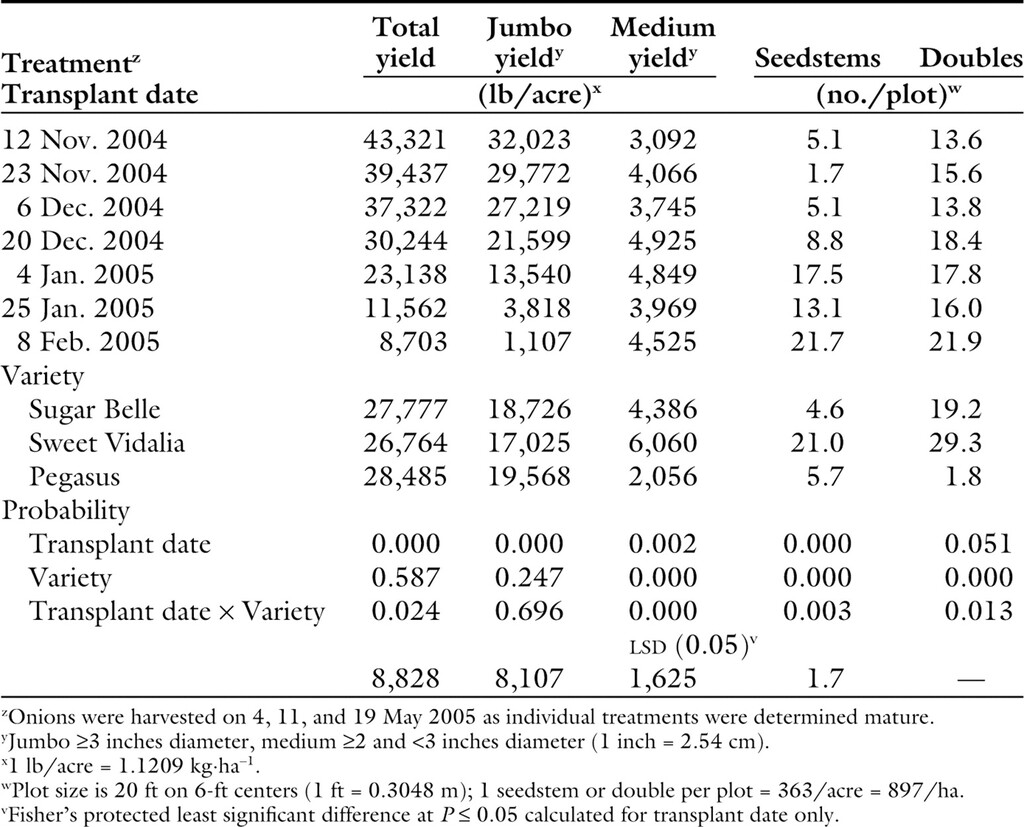 Seedstems and doubles were counted on 15 Apr. 2005 for each experimental unit. Individual treatment combinations (variety/transplant date) were harvested when judged mature (Table 2).

Tops and roots were immediately removed when harvested and bulbs were weighed. These onions were then heat cured and graded into jumbo- and medium-sized classes. 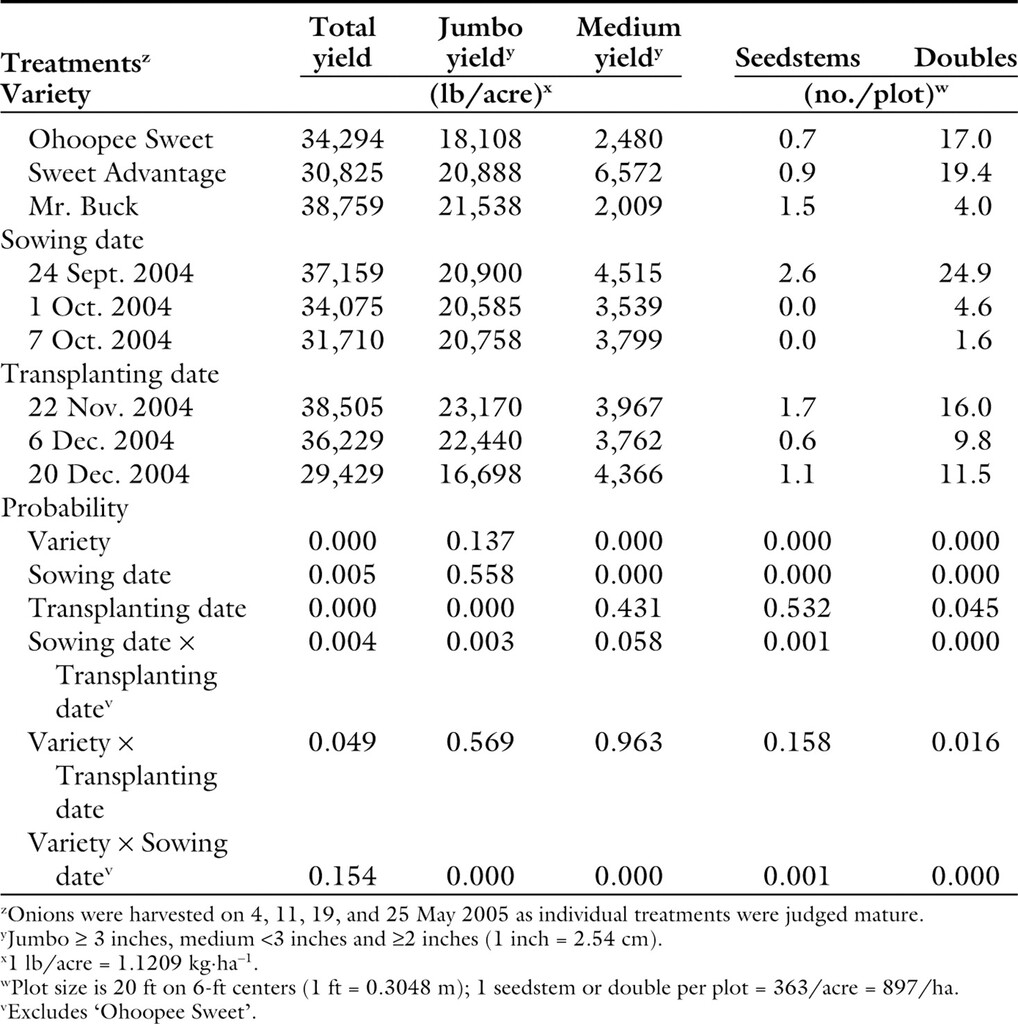 There were significant effects for seedstem numbers based on variety, sowing date, sowing by transplant dates, and variety by sowing date (Table 3). The interaction effects did not differ appreciably (data not shown) from the combined effects for seedstems. ‘Mr. Buck’ had slightly more seedstems than ‘Ohoopee Sweet’ or ‘Sweet Advantage’, and onions sown on 24 Sept. 2004 had significantly more seedstems than those sown on 1 or 7 Oct. 2004.

Total yield is a good indicator of the potential a particular cultural practice or variety can have on onion yield. Based on the 2003–04 season, acceptable yields through the end of January were possible, but with the 2004–05 data, the end of December would be the last date for production of acceptable yields. This coincides with grower practices generally. Growers try to have all of their onions transplanted by the end of December, but there are always some onions transplanted in January. It is rare to hear of onions being transplanted in February, but this is done occasionally due to some unusual environmental factor such as poor transplanting conditions earlier or favorable market forces.

Jumbo is the most important size, with the majority of the onions marketed in this size class. The results with this size class in 2003–04 and in 2004–05 mirrors the results for total yield. Onions are generally of good quality when they are harvested if the percentage of marketable onions (jumbo and medium) is 75% or more of total yield. Dramatic differences between total and jumbo yields reflect quality problems (usually diseases or seedstems) resulting in a high number of culls. As examples, the marketable yield with onions transplanted on 2 Feb. 2004 and 25 Jan. 2005 were 60% and 67%, respectively.

As jumbo yields decrease with later transplanting dates, medium yields often will increase. This is reflected in the 2003–04 data, but not in the 2004–05 data.

The 2003–04 season had particularly high numbers of seedstems and doubles (Boyhan et al., 2004). This reflects environmental conditions that year that favored these undesirable characteristics. Seedstems are usually greater when cool temperatures (<50 °F) occur late in the season (March and April) when plants have sufficient leaf numbers to respond to these conditions and enter a sexual phase, which did occur in the 2003–04 season (Brewster, 1994). Although not reliably tested, doubled bulbs seem to appear with more frequency during years with very cold weather (<20 °F). It is postulated that the meristem is damaged in such a fashion that two meristems result, which produce two bulbs. The 2003–04 season had several occasions when temperatures were below 20 °F. Seedstems and doubles were not nearly as bad overall in the 2004–05 season, therefore the numbers reported this year are more reflective of the treatment effects rather than the environmental effects. This can be seen by increasing numbers of seedstems with later transplanting dates. Doubles were unaffected at the 0.050, but the probability was marginally significant at 0.051.

With the D. Palmer Seed Co. varieties, sowing date had a dramatic effect on doubles. As the company owner had indicated, later sowing dates reduced the number of doubles. Later transplanting, however, was only effective with early-sown onions. Later sowing and later transplanting resulted in a slight increase in doubles, which suggests that sowing date is the more important consideration in reducing doubles. This is something of which growers of these varieties should be aware. Although these cultural practices (later sowing and transplanting dates) can alleviate this problem, it is still an undesirable characteristic in a variety. Varieties should be more forgiving and perform under a reasonably wide range of cultural practices such as sowing and transplanting dates.

This reduction in doubles was particularly pronounced with ‘Sweet Advantage’. ‘Sweet Advantage’ is an older variety than ‘Mr. Buck’ or ‘Ohoopee Sweet’ and, in general, the newer introductions perform better.

In conclusion, short-day onions in southeastern Georgia should be transplanted before the end of December; however, reasonable yields can still be expected with those transplanted in January. In addition, certain varieties such as those from D. Palmer Seed Co. can benefit from later sowing to reduce doubled bulbs. 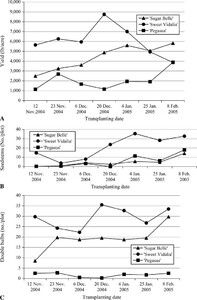 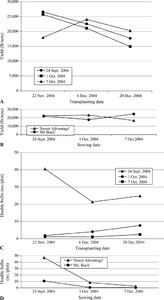