(A) Sweet cherry trees trained to a single leader during the third growing season in the high tunnels at Michigan State University's Southwest Michigan Research and Extension Center (SWMREC) near Benton Harbor. Spacing is 2.0 m (6.56 ft) between trees, 4.3 m (14.11 ft) between the two rows within the tunnel, and 1.5 m (4.92 ft) between the tree row and the side legs of the tunnel. (B) Note the location of the climatic monitoring station and the reflective ground floor fabric.

Sweet cherry tree leaf damage and defoliation in Aug. 2006 due to cherry leaf spot and japanese beetle predation (A) outside the high tunnels and (B) inside the high tunnels (even with open ends and sides) as a consequence of differential leaf wetness for fungal spore germination and filtering of light wavelengths, which is apparently important for beetle flight and/or feeding activity. 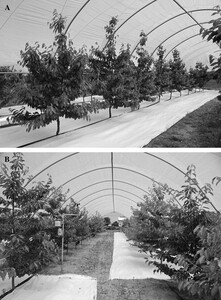