Roses are one of the three main flower crops produced and distributed worldwide, and the large majority of roses purchased in the United States are produced in South America (Armitage, 2000). In 2006, the United States imported cut flowers valued at $750 million, while U.S. production of cut flowers was estimated to be valued at $385 million (Jerardo, 2006). About one-half of imported flowers are roses (Jerardo, 2006). More cut roses are produced and consumed in the United States than any other flower (Bonarriva, 2003). The majority of cut flower roses are grown in climate-controlled greenhouses where temperature, moisture, and light can be adjusted to produce flowers at periods of peak demand (University of California, 1998). In general, rose cultivars grown in greenhouses are distinct from those grown in landscape plantings.

The value of cut flower production in Mississippi is very small and accounts for 0.2% of the value of all floriculture and nursery crops grown in the state (U.S. Department of Agriculture, 1999). However, a survey of Mississippi consumers reported that they would pay a premium to purchase fresh, cut flowers that were locally produced (Hudson and Griffin, 2004). The survey further indicated that the flowers that Mississippi consumers most often purchased were roses, followed by carnation (Dianthus caryophyllus), iris (Iris), lily (Lilium), and gladiolus (Gladiolus). They also reported that consumers would pay a premium price for flowers with fragrance.

A limited number of research publications evaluating outdoor cut rose cultivars exist. Limited research has been reported on cut flower rose cultivar evaluations in Mississippi. Spencer (1993) evaluated 185 modern rose cultivars in field beds, but these were evaluated for landscape, not cut flower performance. Rose cultivar evaluations for Mississippi do not include cut flower production recommendations (Tatum et al., 1998). The production of two rose cultivars evaluated in southern Alabama greenhouse production trials was reported to be equal to that from other areas of the United States (Cobb, 1983). Tabassum et al. (2002) reported the growth of 10 hybrid tea cultivars, two from W. Kordes Söhne (Klein Offenseth-Sparrieshoop, Germany) and three from Meilland Star (Hollister, CA) grown in field beds in Pakistan. ‘Daydream’ produced the most stems, whereas ‘Double Delight’ produced the fewest in this trial. Several specialty cut flower growers have published the results of their efforts to produce fragrant, cut roses for local consumption. W. Kordes Söhne cultivars planted in Idaho (USDA hardiness zone 4) produced numerous short stems in the first production season in field beds (Thurston, 2007). Benzakein (2006) reported that large numbers of stems of W. Kordes Söhne outdoor cut roses were produced in the first growing season in outdoor beds in Washington (USDA hardiness zone 7). This suggests that there are opportunities for locally produced, fragrant roses for local or regional consumption. The objective of this trial was to determine the field production potential of Meilland Star and W. Kordes Söhne cut flower rose cultivars in Mississippi for small-acreage, low-input farmers for local sales. This objective was accomplished by the evaluation of plant growth parameters such as the number of stems produced per plant, stem length, and harvest period of the cultivars. The two series were chosen for this trial because they were promoted as fragrant, cut flower roses for outdoor production.

This study was conducted at the North Mississippi Research and Extension Center (NMREC) in Verona (lat. 34.2°N, long. 88.8°W). Verona is in USDA hardiness zone 7b and American Horticulture Society heat zone 8. Nine Meilland Star rose cultivars (grade 1) budded onto ‘Dr. Huey’ (Rosa ×hybrida) rootstock were planted in field beds on a Savannah sandy clay loam soil in Apr. 2005, and 17 W. Kordes Söhne outdoor cut flower rose cultivars (grade 1) were planted in field beds in Dec. 2004. All W. Kordes Söhne rose cultivars were budded onto ‘Inermis’ (Rosa canina) rootstock. Field beds, ≈8 ft wide, were constructed by mounding soil into a raised bed ≈10 inches higher than the middle between the beds. Composted cattle manure was spread 2 inches deep on top of the beds and then incorporated 4 inches deep. The rose plants were planted 2 ft apart within the row, and the single rows on the top of the beds were spaced 15 ft apart. A single drip tape, placed in the center of the bed on top of the ground, supplied irrigation water. Based on soil test recommendations for rose gardens, beds were fertigated weekly with Peter's 20–20–20 (20N–8.8P–16.5K; Scotts, Marysville, OH) water-soluble fertilizer at a rate of 24 lb/acre during the growing season. Irrigation was supplied in the absence of rain through 12-inch spacing drip tape (T-Tape TSX; T-Systems International, San Diego) to provide 125 gal/100 ft (linear) of row once per week. Weekly fungicide applications were made to help control foliage diseases. The rose plants were pruned in the dormant season using conventional hybrid tea growing techniques. Pesticides were applied to control weeds, insects, and diseases. Ground pine bark mulch was applied in a 5-ft band 2 inches thick.

Experimental units consisted of one plant of each cultivar for the Meilland Star cultivars and two plants of each cultivar that were planted in pairs within the row for the W. Kordes Söhne cultivars. Cultivars of Meilland Star and W. Kordes Söhne were arranged in a randomized complete block design with six and five replications, respectively. Plant size was measured on 9 Feb. 2006 after the growing season. Plant size was measured in cubic centimeters and was calculated using π · r2 · h, where r2 = {[(width 1 + width 2)/2]/2}2. Width 1 was measured across the widest part of the plant and width 2 was measured at a right angle to the first width and h = plant height. Stem growth, foliage appearance, and overall vigor were components of the growth ratings conducted during the growing season. The ratings ranged from 1 to 5, where 1 = poor growth and 5 = excellent growth. Rose stems were not harvested until Aug. 2005 to grow the framework of the plants. Rose stems were harvested as the petals began to open. Stem length at harvest was determined by cutting to the second or third bud above the point where the stem arose from the parent cane. If stem length was less than 20 cm, the stem was not included in the data set in 2005; in 2006, the minimum stem length for inclusion in the data was 30 cm. The number of stems and stem length data were analyzed monthly to determine cultivar productivity over the length of the harvest season. Data collected during the trial were analyzed by SAS PROC MIXED or PROC GLM (SAS Institute, Cary, NC). Means separations were conducted with Fisher's protected least significant difference at the 0.05 significance level. Because cultivars from the two series were planted at different times in different locations, they were analyzed separately. 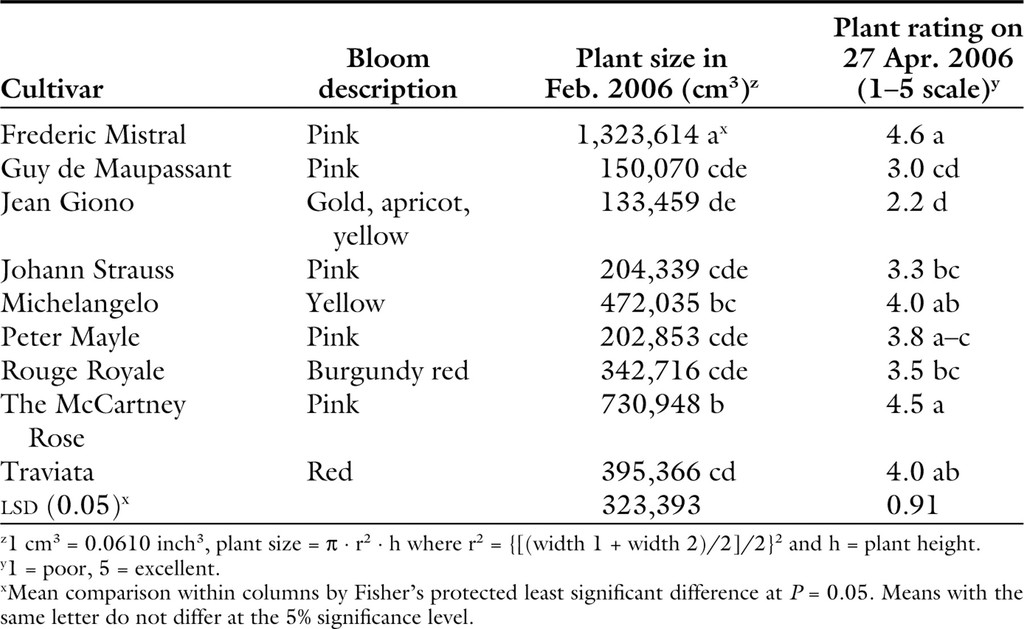 Rose stems were harvested during August, September, and Oct. 2005. There was an interaction between cultivar and harvest date with respect to the number of stems harvested per plant per month. ‘Michelangelo’ produced more stems per plant in August compared with the other cultivars in this trial except for ‘Guy de Maupassant’ and ‘Rouge Royale’ (Table 2). In September, the stem production of ‘Frederic Mistral’ was not significantly different from ‘Johann Strauss’, ‘Michelangelo’, ‘Rouge Royale’, and ‘Traviata’. In October, stem production for ‘Frederic Mistral’, ‘Guy de Maupassant’, ‘Johann Strauss’, ‘Michelangelo’, ‘The McCartney Rose’, and ‘Traviata’ did not differ, and ranged from 6.6 to 9.2 stems/plant. There was no interaction between cultivar and harvest date with regard to stem length. ‘Frederic Mistral’, ‘The McCartney Rose’, and ‘Traviata’ produced longer stems than the other cultivars in 2005.

Number of stems per plant and stem length of Meilland Star (Hollister, CA) rose cultivars grown in field beds in 2005 at Verona, MS.z 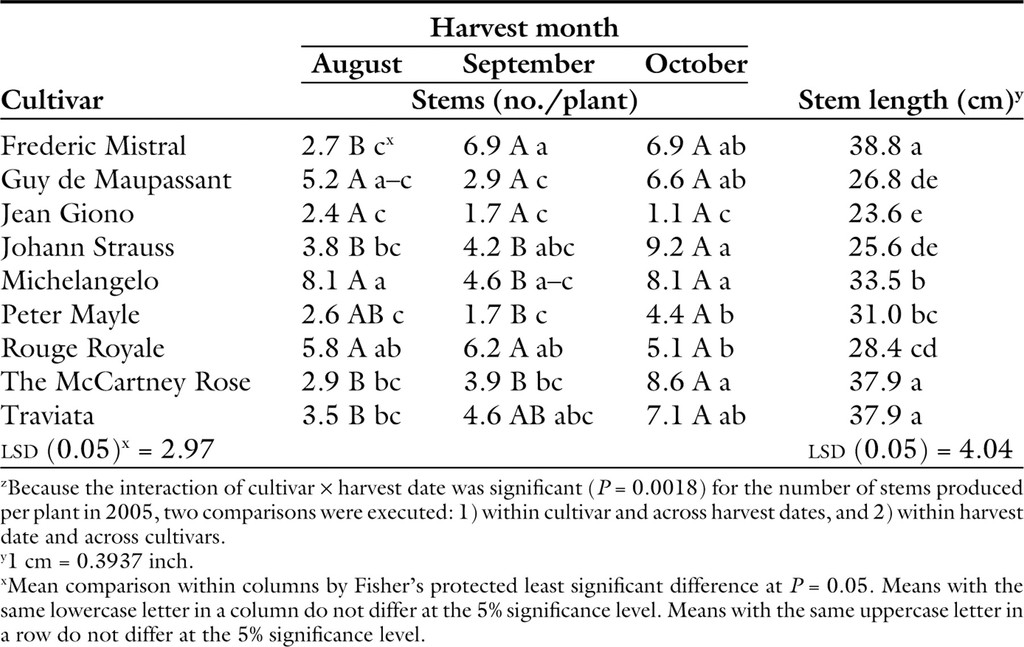 Number of stems per plant for Meilland Star (Hollister, CA) rose cultivars grown in field beds in 2006 at Verona, MS.z

The first stems of 2006 were harvested in April. Stems less than 30 cm long were not measured. ‘Fantasia Mondiale’ produced more stems per plant than the other cultivars in the trial except ‘Pinguin’ (Table 7). Statistically, ‘Eliza’ and ‘Masquerade’ yielded the same number of stems as ‘Pinguin’. ‘Pinguin’, ‘Fantasia Mondiale’, and ‘Masquerade’ produced the longest stems of the trial, at 40.1 to 36.5 cm. 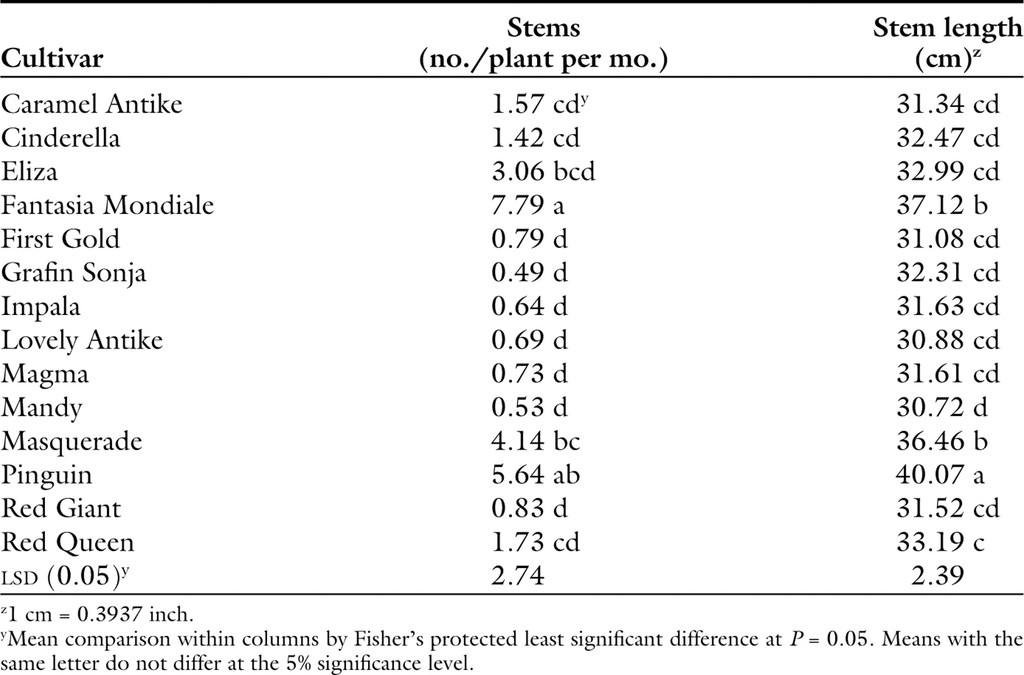 The objective of this research was to evaluate the field production potential of new cut flower rose cultivars in Mississippi where growers of flowers for local sales may not have climate-controlled greenhouses for rose production. There are no reports of previous evaluations of these cultivars in field beds. The W. Kordes Söhne cultivars were planted in this trial before they were released for sale in the United States. The optimum temperature for rose stem production is around 25 °C, and a 40% reduction in photosynthesis of cut flower rose plants was observed when the temperature increased from 25 °C to 40 °C (Jiao and Grodzinski, 1998). The average high–low (day–night) temperatures at NMREC in June–Sept. 2005 and 2006 were well above the optimum reported temperatures for cut rose production (Mississippi State University Extension Service, 2008). The shoot length of miniature roses grown in a growth chamber decreased 31% when the high–low temperatures were raised from 21/16 °C to 30/21 °C (day/night) (Grossi and Pemberton, 2004). Hybrid tea roses in Mississippi landscapes typically have a spring and autumn flush of bloom with a reduction in bloom during the heat of the summer. Several of the Meilland Star and W. Kordes Söhne cultivars in this evaluation consistently produced a greater number of longer stems from the spring, summer, and autumn growing conditions in this experiment. The number of stems and stem length data indicate that ‘Frederic Mistral’, ‘Michelangelo’, and ‘The McCartney Rose’ of the Meilland Star cultivars, and ‘Fantasia Mondiale’, ‘Masquerade’, and ‘Pinguin’ from the W. Kordes Söhne outdoor cut flower cultivars performed the best in the harsh summer environment of the NMREC in 2005 and 2006.

This study evaluated the performance of cut flower rose cultivars bred for outdoor production of florist flowers. During two summer growing seasons, ‘Frederic Mistral’, ‘Michelangelo’, and ‘The McCartney Rose’ of the Meilland Star cultivars, and ‘Fantasia Mondiale’, ‘Masquerade’, and ‘Pinguin’ from the W. Kordes Söhne outdoor cut flower cultivars produced the greatest number and the longest cut flower stems. These cultivars performed well through the heat of the Gulf of Mexico coastal summer.