Excessive vegetative growth in peach causes canopy shading that reduces fruit bud initiation in the canopy interior and increases pruning costs and time (Chalmers et al., 1981; Guilivo et al., 1984; Hayden and Emerson, 1973). Sod in the drive middles does not limit peach tree growth (Belding et al., 2004; Liverani et al., 1992), but weed interference of summer annuals in the tree row will reduce yield (Belding et al., 2004). Similarly, establishing sod or other plant species in the tree row to compete with the peach tree has reduced vegetative growth (Glenn et al., 1996; Glenn and Welker, 1996; Tworkoski, 2000; Tworkoski and Glenn 2001). The proximity of sod to peach tree root systems likely limited nitrogen (N) uptake and reduced fruit number and yield (Tworkoski et al., 1997) while increasing branch angle (Welker and Glenn, 1995). Long-term studies in rain-fed peach production demonstrated that sod competition, while reducing pruning weights and sucker weights in most years, reduced yield in 5 of 18 study years but only reduced yield of large fruit in 1 of 18 study years (Glenn and Welker, 1996). The objective of the present study was to determine the effect of increased sod competition on yield and quality of peach in an irrigated orchard. 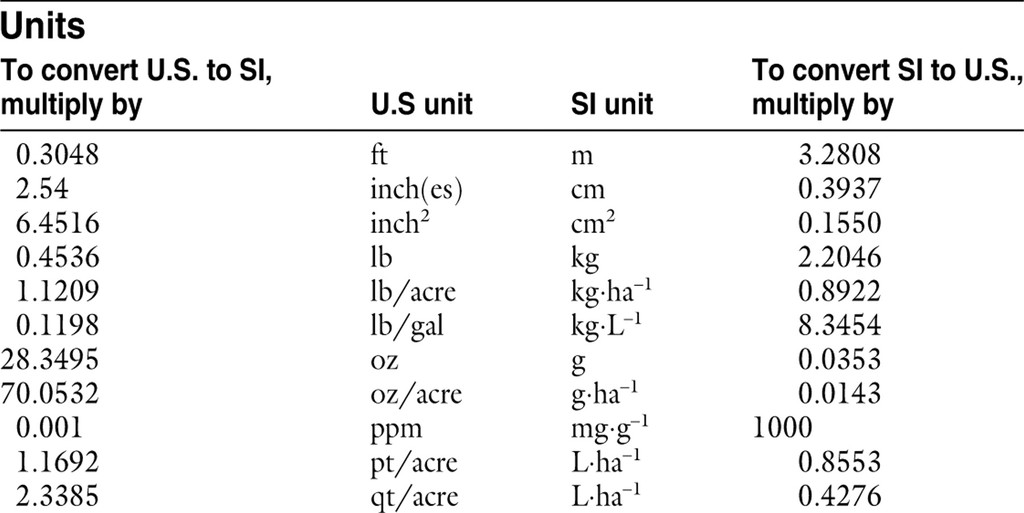 ‘Autumnglo’ on Lovell seedling rootstock were planted in augered holes in 1997. All trees were cut back to a 3-ft height after planting. Trees were planted in rows spaced 20 ft apart and oriented north to south with 8-ft spacing within rows. A randomized complete block design with six replications was used. Each plot was 10 ft wide and contained seven trees with a guard tree between plots in each row. Data were collected from the center five trees. The trees were dormant pruned in all years and were summer pruned in 5 of 7 years.

Trees were trained and dormant pruned to a modified central leader with four permanent lower scaffolds and the central leader. Central leader side limbs were dormant pruned to remove any limbs that were two-thirds the diameter or larger of the leaders diameter. Smaller diameter limbs were pruned to one or two buds to promote annual fruiting wood. One-year-old wood and the shoots growing from the leader were spaced and thinned along the leader for fruiting. The leader was dormant topped at an 8 ft height to a weak competing leader. When pruning the trees, no attempt was made to keep the two treatment canopies of similar dimensions—that is, the trees were allowed to grow outward until they filled the space allotted. Therefore, with 20 ft between rows, the 0.6 vegetation-free areas (VFA) took longer to fill the area and required less pruning. Summer pruning was generally done in late July. All shoots of current summer growth that were vigorously growing upright were removed. Flowers were thinned with 5 qt/acre Wilthin (sulfcarbamide 79% a.i.; Entek Corp. Brea, CA) and 1 pt/acre Regulaid (2-butoxyethanol + poloxalene + monopropylene 90.6% a.i.; Kalo, Inc., Overland Park, KS) each year at 80% to 90% bloom. Supplemental hand thinning commenced after June drop. Final fruit spacing was 6 to 8 inches along the shoot. There was no attempt to equalize the crop load between treatments other than the fruit spacing at 6 to 8 inches.

Sod of ‘Kentucky-31’ tall fescue (K-31; Festuca arundinacea) was established in the drive middle. After planting, the tree row strip was maintained with an 8- or 2-ft vegetation-free strip. Fruit were harvested two to three times in late August in all years, and there were no severe frosts that limited cropping. Fruit load was annually thinned by hand. Fertilization and weed control varied each year and were not constant across both treatments (Tables 1 and 2).

Fertilizer materials and amounts applied to ‘Autumnglo’ peach and the leaf nitrogen (N) content from 1997 to 2005. Trees were planted in 1997.

Herbicide materials and amounts applied to ‘Autumnglo’ peach from 1997 to 2005. Trees were planted in 1997. 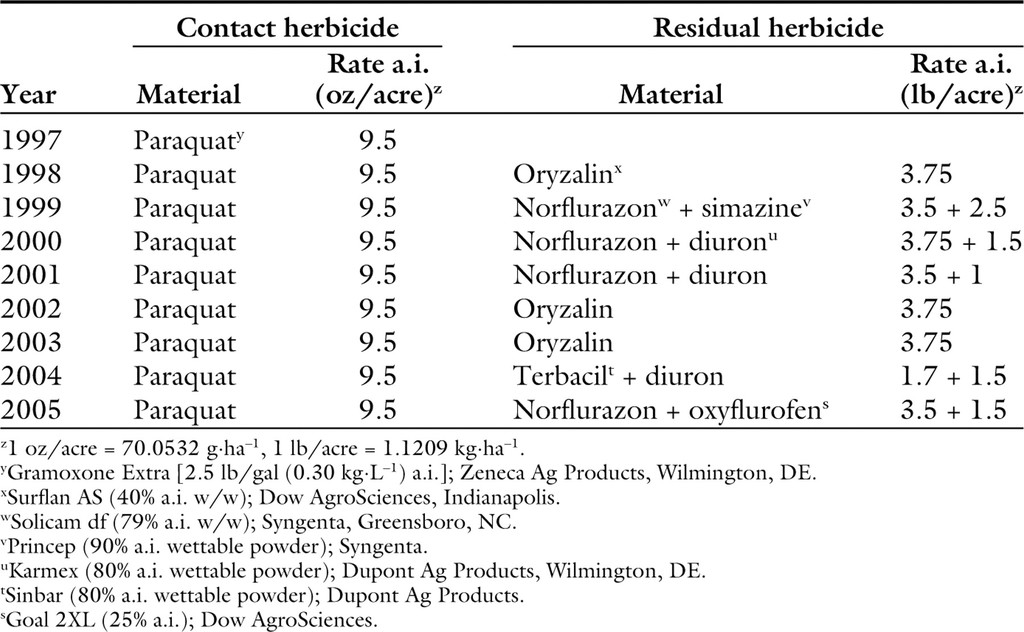 Canopy light interception was measured in July of 1999 through 2001 before summer pruning. Light transmission through the canopy was measured at 25-, 50-, 75-, and 100-cm distances from the tree at ground level on the north and south sides of the tree. Data were collected on clear days 1 h before to 1 h after solar noon. A 1-m line quantum sensor (model LQA; LI-COR, Lincoln, NE,) measured transmitted photosynthetically active radiation (PAR). Incoming PAR levels were measured after each eight data points beneath the canopy. Transmission was calculated as the percentage of PAR beneath the canopy at a specific distance, relative to the average incoming PAR before and after the eight readings.

Pruning fresh weights of each five-tree plot were collected in dormant seasons from 1999 to 2005 and for summer prunings in all years except 2003 and 2005. Data are expressed on a single-tree basis.

When fruit were harvested (five trees per plot), a subsample of 20 fruit per plot were randomly collected for color analysis for 1999 to 2001. Hue angle was calculated from measurements on four sides of each fruit with a color meter (Chromameter 400; Minolta, Osaka, Japan).

Effect of vegetation-free area (VFA) width on pruning weight and annual increase in trunk cross-sectional area (TCSA) from 1999 to 2005 in ‘Autumnglo’ peach planted in 1997 and the results of analysis of covariance relating total fruit yield to dormant season pruning weights.

Annual increase in trunk cross-sectional area (TCSA) was reduced by increased sod competition in the first year of cropping and was unaffected in subsequent years (Table 3). TCSA at the end of the study was not significantly affected by the VFA treatments.

Canopy development was reduced by increased sod competition in the first year of cropping, which increased PAR transmission through the canopy and decreased hue angle or increased fruit red color (Table 4). In the second year of cropping, PAR levels were still greater with the 2-ft treatment at 75 and 100 cm from the tree, indicating reduced canopy development, but fruit color was unaffected. In the third cropping year, canopy development was complete. The 2-ft treatment had increased PAR transmission at the 25-cm distance likely due to a reduction of suckers (Glenn and Welker, 1996) with no effect on fruit color.

Transmitted photosynthetically active radiation (PAR) levels beneath ‘Autumnglo’ peach canopy and hue angle of fruit harvested for 1999 to 2001. Trees were planted in 1997.

The relationship between total fruit number and total yield was not significantly different for the VFA treatments in any year (data not presented), however, the total number of fruit per tree was reduced in all years and total yield reduced in 6 of 7 years (Table 3). Cumulative yield was reduced by the 2-ft VFA treatment (Table 3). Yield of fruit >3½ inches diameter was reduced by sod competition in 2 of 8 years and increased in one year (Table 5) and similar to the results of Glenn and Welker (1996). Yield of fruit with diameters 3 to 3½ inches and 2½ to 3 inches was reduced by sod competition in 4 of 7 years, whereas yield of fruit <2½ inches was reduced by increased sod competition in 2 of 7 years. Analysis of covariance using number of fruit per tree as the covariate indicated that there was not a significant difference (P = 0.05) in total yield when adjusted for the number of fruit per tree in any year (data not presented). The lack of total yield difference when adjusted for fruit per tree suggests that the sod competition treatment was consistently reducing the fruit number per tree. Tworkoski et al. (1997) demonstrated that sod proximity reduced N uptake and fruit number. However, in this study, peach leaf N levels were neither deficient nor different between treatments (Table 1) in all years except for the first year of cropping. Since trees were hand thinned after the June drop, it is likely that reduced floral shoot number in the 2-ft VFA was the source of the reduced crop load. Analysis of covariance may provide an explanation of the fruit number per tree effect. When dormant pruning weight is used as the covariate in the analysis of variance for total yield, the adjusted treatment yield, adjusted for pruning weight, is not significantly different in the first 3 years of cropping (Table 3). However, the adjusted treatment yield, adjusted for pruning weight, is significantly different in the fourth to seventh year of cropping. This pattern of differences corresponds with the significant treatment effect on dormant pruning weights and suggests that in the first 3 cropping years, dormant season pruning was removing equivalent floral shoot tissue and crop-bearing wood. However, in the subsequent years, dormant season pruning was removing a higher percentage of the crop-bearing wood from the 2-ft VFA treatment, resulting in reduced yield per unit of dormant pruning. Canopy development of both treatments was equivalent in the third cropping year and the tree row space was filled (Table 4). This indicates that pruning practices must be modified to leave more bearing wood in mature trees to maintain yield potential when sod competition is used to control vegetative growth. In the 7 cropping years, cumulative yield and pruning weight were reduced by the 2-ft VFA treatment (Table 3). Establishing sod beneath peach trees, while an effective soil conservation practice that reduces herbicide usage, continues to increase risk of yield reduction unless traditional cultural practices are modified.

Effect of vegetation-free area (VFA) width on ‘Autumnglo’ peach fruit size distribution and yield from 1999 to 2005.