Soilless root substrates (substrates) are commonly used in the production of containerized greenhouse crops. These substrates may be composed of a single material such as rockwool or block-cut peat, but in most cases, they are composites formulated by the blending of two or more components such as peat, composted bark, perlite, whole rice hulls, or vermiculite (Hanan, 1998; Nelson, 2003). Substrates are designed to have appropriate physical properties for specific crops and growing conditions. The components used to formulate the substrate and the proportions of the components may be altered to change the physical properties of the substrate as desired (Bunt, 1988). Total pore space, air-filled pore space, waterholding capacity, available water content, easily available water, and bulk density are typically the physical properties of greatest interest for substrates to be used in greenhouse crop production.

Peat is one of the most common components used in the formulation of root substrates (Cattivello, 1991). Environmental concerns (Barkham, 1993; Buckland, 1993; Robertson, 1993) in the European Union and cost in markets such as Japan that are far from commercial peat sources have generated significant interest in the development of new substrate components that could serve as alternatives to peat in substrates.

Most research on the development of new substrate components that could serve the same purpose in the root substrate as peat has been focused on agricultural, industrial, and municipal waste products. Among these products were coconut (Cocos nucifera) coir (Evans and Stamps, 1996), cotton (Gossypium hirsutum) gin waste (Wang, 1991), waste paper products (Chong and Cline, 1993; Raymond et al., 1998), composted rice hulls (Laiche and Nash, 1990), kenaf (Hibiscus cannabinus) (Wang, 1994), feather fiber (Evans, 2004), municipal sewage sludge (Klock-Moore, 1999, 2001), composted yard waste (Beeson, 1996), and various composted animal manures (Tyler et al., 1993). Some of these materials were not produced in large enough quantities to impact the market, whereas others were too expensive for their intended use. Some of these materials have proven to be unsuitable because of their high degree of variability and their likelihood of containing contaminants such as metal fragments, glass, lead, and mercury, whereas others have been successfully used locally, regionally, or in niche markets.

Rice hulls are a byproduct of the rice milling industry. Rice is produced over large areas of Asia, and in the United States, it is produced primarily in Arkansas, Texas, Louisiana, Mississippi, and California. In Europe, most rice is produced in Italy's Po River Valley. The yield of rice hulls was reported to be ≈20% by weight. Because 350,000 mg of rice was produced in Italy in 2003 (Ente Nazionale Risi, 2006), the resulting rice hulls would be ≈87,500 mg. Rice production in the United States was estimated to be ≈7.5 million tons [U.S. Department of Agriculture (USDA), 2007], and worldwide production of rice was estimated to be 474 million tons per year. This would translate into 1.89 million and 118 million tons of rice hulls per year in the United States and worldwide, respectively. Therefore, rice hulls are an abundant and readily available material throughout much of the world.

The objective of this research was to evaluate the physical properties of different sizes of fresh rice hull particles produced by grinding and screening and to determine if the ground rice hulls had similar properties to peat and if they would be suitable as an alternative to peat in substrates to be used for greenhouse crop production.

The particle size distribution of the peat and ground rice hull products were determined by sieving dry 100-g samples of each material on a series of sieves with openings ranging from 5 mm to 0.5 mm for 2 min. The amount of material collected in each screen was weighed and the percentage of material collected on each screen was calculated as a percentage (w/w) of the whole sample.

Peat and rice hull products were dried in an oven at 65 °C for 48 h. The materials were then packed into brass cylinders that were 80 mm diameter and 51 mm tall, and the ends of the cylinder were sealed with cheesecloth. Samples were saturated with water and water retention curves of the samples were developed using a tensiometric box and pressure plates according to methods described by the International Substrates Manual (Frank-Paul and Berg, 2000). Samples were subjected to head pressures of 1, 1.5, 2, 3, 5, 7, and 10 kPa (De Boodt and Verdonck, 1972). The volume of water held from 0 to 1 kPa of pressure was considered to be the AFS at container capacity, and the water held at a pressure of 1 kPa was considered to be total water holding capacity (WHC). Water held from 1 to 10 kPa was considered to be available water content (AVW), whereas water held from 1 to 5 kPa was considered to be easily available water (EAW) (Bunt, 1988; De Boodt and Verdonck, 1972). Samples were dried in an oven at 105 °C until they reached a constant weight. The dry weight was subtracted from the weight at container capacity to determine total WHC. The AVW and EAW were divided by the total WHC to determine the percent of water available (PWA) and easily available (PEW), respectively. The dry weight of the substrate was divided by the total cylinder volume to determine bulk density (Frank-Paul and Berg, 2000).

For each test material, five cylinders were tested with a cylinder serving as a replication. Water retention curves were plotted with water content (% by volume) versus pressure. An analysis of variance was conducted to determine if bulk density (Bd), total pore space (TPS), WHC, AVW, and EAW differed significantly among the substrate materials. Where significant differences occurred, a least significant difference mean separation test was conducted to determine differences between specific means.

Peat had the highest WHC (1 kPa pressure). As pressure was increased from 1 to 5 kPa, peat released water more slowly than any of the ground rice hull products (Fig. 2). The RH1 and RH2 ground hull products released water at a significantly higher rate than peat, but RH4 and RH6 released the most water over these ranges of pressures. For all rice hull products, most water was released between 1 and 2 kPa pressure. Additional water was released more slowly over the range of pressures from 2 to 10 kPa. At 10 kPa pressure, peat held the most water of all the substrate components, whereas RH1, RH2, and RH4 had similar water content at this pressure. The RH6 had the lowest water content at 10 kPa pressure.

The physical properties of the ground rice hull products compared with one another can be explained as a function of average particle size. As particle size decreased, particles packed more closely together, and this resulted in a higher Bd and a lower TPS. Additionally, as the average particle size decreased, average pore size would have decreased and the number of micropores would have increased. These smaller pores would tend to remain water-filled at container capacity and this would result in an increase in WHC and a decrease in AFP, which is what was observed for the ground rice hull products.

Peat had a higher proportion of larger particles than any of the ground rice hull products and thus, as expected, it had the highest TPS. However, it had the lowest AFP and the highest WHC. This was likely because although the particles of peat were relatively large in comparison with the ground rice hull products, peat is a fibrous material. In addition to fibers, peat contains leaf remnants from its plant origin. Although the peat particle is large, its structure creates many small pores within the larger structure and these small pores ultimately retain water rather than draining and being air-filled at container capacity. Additionally, the numerous small pores created by the fibers and leaf remnants of the peat would have held water more tightly against pressure resulting in the difference in the water retention curves of the rice hull products and peat. 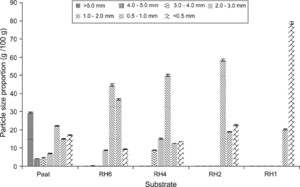 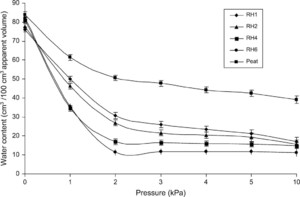