Search for other papers by Nancy L. Maxwell in
ASHS
Google Scholar
PubMedClose

In the United States, pumpkin crops are produced primarily for wholesale, fresh-market, and ornamental use. Pumpkin production increased 6.4% in the U.S. between 2004 and 2005, totaling 1.1 billion lb in 2005 (U.S. Department Agriculture, 2006). An increase in the demand for pumpkin crops over the past decade has been the result of the growing popularity of events such as fall festivals, grade school farm tours, and u-pick crops. Most farms in New Jersey are surrounded by, or are located near, urban and suburban areas; therefore, many farmers operate roadside markets that sponsor agritourism events featuring the fall harvest of pumpkin crops. In 2007, New Jersey harvested 2500 acres of pumpkin, accounting for 5% of U.S. production (Ingerson-Mahar et al., 2007).

A critical aspect of entertainment agriculture, where agritourism is a main focus of the operation, is maintaining attractive fields that are weed-free and in a condition suitable for consumers to enter. Small farm operators near urban areas could apply autumn leaves collected from municipal shade trees to help 1) maintain an attractive field, 2) maintain suitable soil conditions for customer entry, 3) improve cleanliness of u-pick pumpkin fruit, and 4) improve overall soil health with the addition of organic matter to the soil (Heckman and Kluchinski, 2000a, 2000b). Municipal leaves spread over the soil surface may also help to conserve soil moisture, prevent soil erosion, and build soil fertility (Heckman and Kluchinski, 1996, 2000a, 2000b). Another advantage of leaf mulch is that it may serve as an effective barrier to prevent or reduce annual weeds. Leaf mulch residue that persists season-long for crops such as pumpkin may also provide a natural, physical barrier by preventing fruit from coming into direct contact with the soil, thereby resulting in cleaner fruit for consumers to handle and purchase.

Leaf mulching on agricultural land may also benefit local municipalities by providing a cost-effective method to use collected leaves. In New Jersey, 5 million cubic yards of leaves are collected each year by local municipalities for composting or use on farms because state regulations prohibit the disposing of leaves into landfills or with local incineration (Derr and Kluchinski, 1995). In 1994 in New Jersey, a study of municipalities and local farm operators who applied municipal leaves to their land indicated that on-farm mulching had the potential to reduce the cost of municipal leaf management while providing organic matter to the soil and monetary incentives to the farmers through tipping fees paid by municipalities to farmers averaging $3.00/yard3 (Derr and Kluchinski, 1995). However, a potential concern with the use of municipal leaves as a soil-surface mulch in vegetable production is the high carbon to nitrogen ratio (C:N) of shade tree leaves. Shade tree leaves have a C:N ratio of ≈50:1, and heavy applications of such leaves are likely to cause immobilization of soil N (Heckman and Kluchinski, 1995, 1996). The high C:N ratio of leaves would suggest that higher than normal N fertilizer application rate may be necessary when growing vegetable crops such as pumpkin with municipal leaf mulch.

The objectives of this study were to determine the effects of leaf mulch and sidedress nitrogen rate on pumpkin yield and fruit quality.

On 13 June 2005, 250 lb/acre of 20N–1.7P–6.6K and on 12 June 2006, 166 lb/acre of 30N–0P–0K–7S was broadcast and incorporated to the entire field according to preplant soil tests. Each year after seeding, the herbicide containing ethalfluralin and clomazone (Strategy; Loveland Products, Greeley, CO) was applied at a rate of 1.2 lb/acre a.i. of elthalfluralin and 0.38 lb/acre a.i. of clomazone for weed control in bare soil production systems. In each year, no herbicide was applied to either leaf mulch production system. On 14 June 2005 and 13 June 2006, municipal leaves obtained from a local municipality the prior fall were applied to the soil surface to a depth of ≈6 inches using six passes of a New Holland 520 manure spreader (New Holland, Belleville, PA) per plot, with an annual rate equivalent to 20 tons/acre (dry weight). Municipal leaves were uniformly raked by hand in each plot before seeding. On 14 and 13 June 2005 and 2006, ‘Magic Lantern’ pumpkin (Harris Moran, Modesto, CA) was seeded by hand in two rows spaced 10 ft apart with 2 ft between hills (three seeds per hill) and then immediately hand-watered with 8 fl oz of water. At pumpkin seeding, leaf mulch from each planting row was moved manually by hand to expose the soil surface before seeding and to prevent leaf mulch from hindering germination. After seeding, carbofuran (Furadan; FMC, Philadelphia, PA) was banded over each row at a rate of 3.8 oz per 1000 linear ft for cucumber beetle (Diabrotica spp.) control. On 22 July 2005 and 6 July 2006, at about vine tip in each year, the first ammonium nitrate sidedress application was done to all plots at a rate of 25 lb/acre N. On 2 Aug. 2005 and 24 July 2006, an additional 50 lb/acre N of ammonium nitrate was sidedressed on treatment 3 and treatment 4. Each sidedress N fertilizer application was done by hand by placing a narrow band beside each planting row over the soil or leaf mulch surface. Overhead irrigation was applied at 1/2 inch immediately after each sidedressing.

On 6 July 2006, pre-sidedress soil nitrate test (Heckman, 2002) samples were taken by collecting four cores (2 cm diameter × 30 cm deep) between the planting rows of each pumpkin plot. After collection, soil cores were combined by plot and immediately dried and analyzed for nitrate concentration according to the method of Griffin et al. (1995). SPAD readings were done using a chlorophyll meter (model 502; Minolta, Osaka, Japan) to measure relative chlorophyll levels on the most recent mature leaf on 6, 17, and 24 July 2006. In each year, local extension recommendations for insect and disease control and overhead irrigation were followed during the production season.

On 21 Sept. 2005 and 4 Oct. 2006, all pumpkin fruit were harvested from each plot and weighed. Each harvested fruit was visually rated and scored for the presence of residual soil on the fruit surface to determine the percentage of clean (soil-free) fruit per plot. Pumpkin fruit with adhering soil were scored as zero and fruit with no adhering soil were scored as one (clean). Additionally, at each harvest, the total number and weight of orange and green fruit, average weight of orange fruit, percentage of harvested orange fruit, and percentage of clean fruit (free of soil) per plot were calculated. Data were statistically analyzed using SAS (v9.13; SAS Institute, Cary, NC) with Fisher's protected least significant difference (lsd) to determine any significant differences between treatments.

In both years, pumpkin seedlings in leaf mulch treatments exhibited the yellowing of leaves within 3 weeks after emergence. The N deficiency was quickly overcome in both years with the first application of sidedress N fertilizer. The first sidedress N was applied 16 d earlier in 2006 because the field plot was scouted sooner and N deficiency symptoms were visually observed at a much sooner date in 2006 (6 July) compared with 2005 (22 July). Relative chlorophyll level measurements in 2006 showed lower values in the leaf mulch production systems at 23 and 34 d after seeding (DAS; Table 1). By 41 DAS, pumpkin plant leaves exhibited no difference in level of greenness among treatments (Table 1). These results show that initial crop N deficiency was temporary and that it was quickly corrected by sidedress N application. A pre-sidedress soil nitrate test performed on 6 July 2006 confirmed higher N immobilization of soil nitrate (NO3) in leaf mulch production systems; soil NO3 concentration decreased (P = 0.001) from 14 mg·kg−1 on bare soil plots to 5 mg·kg−1 on mulch plots (data not shown). 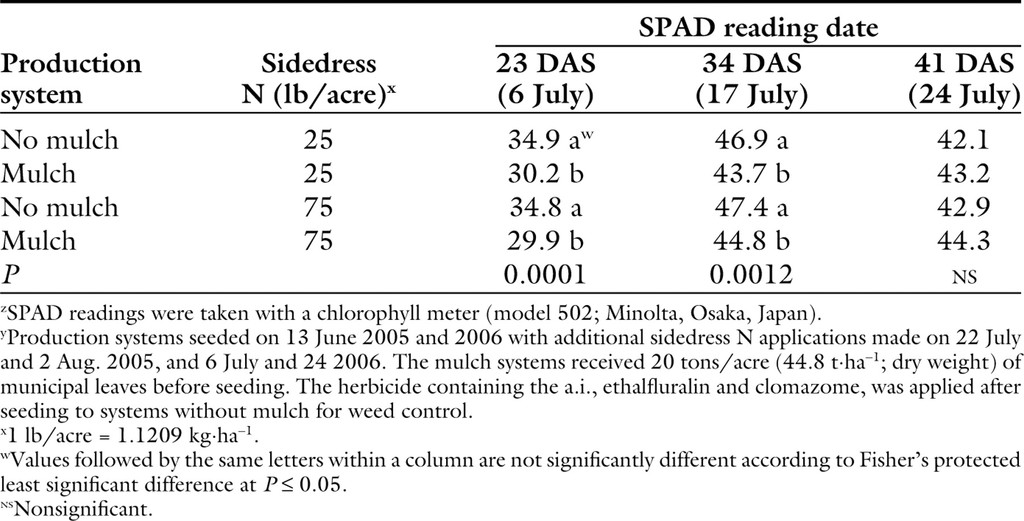 Effects of four different production systems on number and weight of total, orange and green fruit, marketable yield, percentage of orange and percentage of clean fruit of ‘Magic Lantern’ pumpkin in 2005 and 2006.

In both years, field observations suggested that leaf mulch was at least as effective at preventing the growth of annual weeds as the herbicide application to the bare soil plots. Using leaf mulch with herbicide applications may help to further reduce weed pressure in u-pick farm operations. Having clean, weed-free pumpkin fields is especially important in u-pick operations where fields must remain aesthetically inviting and accessible to consumers for extended periods during the fall. Using leaf mulch in addition to herbicide applications may be important in fields where early season herbicide efficacy is lost or reduced toward the end of long production season. In addition to potentially reducing the need to use herbicide for weed control, other benefits of using leaf mulch in pumpkin production include soil erosion reduction, long-term contributions to soil fertility, soil health, and soil moisture retention, especially in fields where supplemental irrigation cannot be done.

In this study, pumpkin yields using leaf mulch without herbicide was equivalent or better than conventional bare soil production systems using herbicide with the same equivalent N sidedress applications. In this study, sidedress N application rate had no effect on the total number of fruit produced in bare soil or leaf mulch production systems, however, the average weight of orange fruit increased when pumpkins were grown on municipal leaf mulch. Results suggest that fields with leaf mulch should be monitored closely and sidedress N should be applied accordingly to overcome an expected, but temporary, N deficiency from N immobilization because of the leaf mulch and its affect on soil conditions. Leaf mulch can help produce cleaner fruit and result in field conditions that may enhance public enjoyment of the agritourism experience. For u-pick operations, having fields accessible during wet conditions in the fall is critical. An advantage of leaf mulch is that it prevents soil from adhering to pumpkin fruit and customer shoes and clothing, resulting in a more enjoyable customer experience. Using leaf mulch may also help reduce costs associated with washing fruit if pumpkins have to be cleaned before sale.