Researchers have documented injury from airborne salts to plants growing near the coast (Edwards and Holmes, 1968; Karschon, 1964; Malloch, 1972). Exposure to water with high salt content reduces or inhibits plant growth (Belligno et al., 2002a, b; Marcum, 2001; Qian et al., 2001). Much of the research done in salinity tolerance concerns saline soil or saline irrigation (Alshammary et al., 2004; Belligno et al., 2002a, b; Gulzar et al., 2003; Hunter and Wu, 2005; Marcum, 1999; Marcum et al., 2005), but little research focuses on plant exposure to salt spray under nonsaline irrigation conditions. It is well documented that plants are often more sensitive to saline spray than to salt applied at the root zone (Benes et al., 1996; Bernstein and Francois, 1975; Grattan et al., 1981, 1994; Westcot and Ayers, 1984). In addition, much of the research done assesses survival rates of plants under saline conditions, but few studies consider the aesthetic value of the plants after foliage is exposed to water with high salt concentrations (Marcum et al., 2005). For landscape plantings to be successful, they must not only survive, but meet high aesthetic standards.

Height, inflorescence number, and visual rating data were collected bimonthly. Height measurements were recorded for both cultivars using only green foliage; chlorotic and necrotic foliage was not included. Visual ratings conducted by the same three observers at each data collection were based on foliage appearance, with 1 = no green foliage, 3 = 50% green foliage, and 5 = all green foliage. Although quality standards differ, researchers deemed ratings of 1 and 2 as unacceptable, a rating of 3 as marginally acceptable, and ratings of 4 and 5 as acceptable in most professionally maintained landscape situations. In addition, root gain, shoot gain, total biomass gain, and height gain (final – initial) were calculated. Mortality was also monitored throughout the experiment. After 90 d, plants were destructively harvested, partitioned into roots and shoots, dried at 70 °C for 72 h, and weighed.

The experiment was conducted as a completely randomized design with seven single-plant replicates. Regression equations were calculated for shoot dry weight gain, root dry weight gain, and biomass gain as a function of seawater salt spray concentration for each species. Comparisons were made between species to determine effects of both species and seawater salt spray concentration on dry weight gain. When all equations within a comparison were linear, slopes were compared using single-df contrast, and intercepts were analyzed as suggested by Snedecor and Cochran (1980). For these variables, when at least one of the regression lines was quadratic, data were analyzed as a 2 × 4 factorial with two species and four seawater salt spray concentrations. When significant differences were indicated, mean separation was by Fisher's protected lsd (Snedecor and Cochran, 1980)].

Regression equations were also calculated for height and inflorescence number over time at each seawater salt spray concentration for each species. Heights and inflorescence numbers were analyzed separately by species. Comparisons were only made within a species to determine effects of seawater salt spray concentration on height and inflorescence number. When all equations within a comparison were linear, slopes were compared using single-df contrast, and intercepts were analyzed as suggested by Snedecor and Cochran (1980). When at least one of the regression lines was quadratic, data were analyzed as repeated measures separately by species. Analysis was by split plot, with seawater salt spray concentration as the main plot and days after treatment initiation as the subplot. When significant differences were indicated, mean separation was by Fisher's protected lsd (Snedecor and Cochran, 1980). Overall plant quality was analyzed by NPAR1WAY Wilcoxon Kruskal-Wallis. When differences were indicated, means separation was by Wilcoxon two-sample test (Howell, 2004). All analyses were conducted using SAS (version 9.1.3; SAS Institute, Cary, NC).

Throughout the experiment, visual ratings of ‘Gracillimus’ maiden grass and ‘Hamelin’ fountain grass were inversely related to salt spray level. Lower visual ratings were the result of the presence of chlorotic and necrotic leaves. 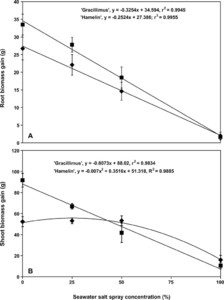 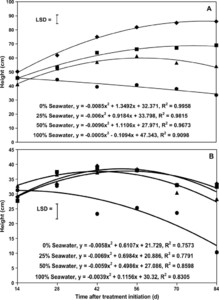 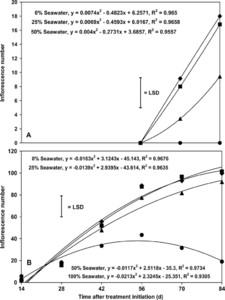