The U.S. Department of Agriculture (USDA) estimated that 185 million geraniums were produced in 2000 with a total wholesale value of $250 million (USDA, 2003). Geraniums are susceptible to pathogens [e.g., water molds (Pythium and Phytophthora) (Daughtrey, 2003a; Moorman, 1998)] that can cause major disease problems. Many species of Pythium cause damping-off of germinating seeds, infect young roots, cause root rot in older plants, and, by proliferating into the stem base and growing upward, cause black leg symptoms on geraniums (Daughtrey, 2003b). Aboveground symptoms of Pythium infection include yellowing and browning of lower leaves, wilting, and plant death (Daughtrey, 2003b). However, mild root rot, causing only plant stunting, might go undetected unless compared directly with healthy, uninoculated plants (Hausbeck et al., 1989). Growers may attribute poor growth in asymptomatic plants to inadequate nutrition or insufficient watering, often resulting in overfertilization and overwatering (Jones, 2001). Wet soil conditions can favor the production, survival, and dissemination of zoospores and sporangia.

The objective of this study was to determine if changes in geranium leaf temperature, measured by infrared (IR) transducers aimed at the plant canopy or individual leaves, correlate with root infection by pathogenic water molds. If successful, leaf temperature could be used to nondestructively indicate infection of greenhouse-grown plants, perhaps before visible symptom development.

Seeds of ‘Maverick Red’ geranium (Ball Horticultural Company, Batavia, IL) were sown singly in foam cubes (15 × 15 × 30 mm each, LC1-type; Smithers-Oasis North America, Kent, OH). Two-week-old seedlings were transplanted individually to 4-inch-diameter pots filled with soilless substrate containing 2:2:1 (by volume) vermiculite, sphagnum peat, and perlite (Blend 1, Sunshine Media Mix; Fisons Western Corp., Vancouver, BC). Six plant pathogens commonly introduced into greenhouses through contaminated growth media or tools were trialed: Pythium aphanidermatum, Pythium ultimum, Phytophthora cactorum, Phytophthora cinnamomi, Phytophthora citrophthora, and Verticillium dahliae. Pathogens were cultured on potato dextrose agar [PDA (DIFCO, Sparks, MD)] for 7 to 10 d at 25 °C. A cork borer (Fisher Scientific, Pittsburgh, PA) was used to transfer four or five 0.4-inch-diameter mycelial disks from the edge of the colonies to the stem–root interface of each plant. Sterile PDA disks were used as a control. The disks were then covered lightly with the soilless substrate to minimize desiccation. Pots containing plants treated with the same pathogen were placed in plastic trays with 1 inch of water in the bottom for 48 h to simulate flooded conditions favorable for the release of zoospores and sporangia (Benson and von Broembsen, 2001; Jones, 2001). After 48 h, the plants were removed from the trays and returned to the greenhouse bench. Plants were fertilized daily with fertilizer solution based on 100 ppm nitrogen (Peter's 20N–8.8P–16.6K water-soluble fertilizer; Scotts Company, Marysville, OH) and maintained at 23 °C temperature with a 16-h photoperiod. No insect problems were detected for the duration of the experiment, so no insecticide was applied. Plants were periodically inspected for symptom development and disease progress.

After inoculation, plants were moved, one at a time, to a measurement station located no more than 2 m from the growth area in the same greenhouse. The station (Fig. 1) was equipped with a quantum sensor (model QSO; Apogee Instruments, Logan, UT) to measure photosynthetically active radiation; a pyranometer (model PYR; Apogee Instruments) to measure shortwave radiation; and a humidity/temperature probe (model CS500; Campbell Scientific, Logan, UT) and two thermocouples (type K) to measure and record the environment. One thermocouple was used to measure air temperature (shielded and aspirated with a foil covered box and fan) and the other was used as a switch; when it was held or touched, the thermocouple heated, which switched the datalogger (CR10X; Campbell Scientific) from only monitoring to both monitoring and saving the environmental data. Having a single station rather than measuring each plant in its growing location within the greenhouse minimized environmental variability on a single day among plants.

An IR surface temperature probe (model IRT-P5; Apogee Instruments) measured leaf surface temperature (Fig. 1). The probe was positioned 4 inches from the top of the plant and at a 65° angle to prevent probe shading the target area. After the plant was placed in the measurement station, it was allowed to stabilize for 1 min before the surface temperature was recorded. The probe had a 5:1 field of view, which meant that in these measurement conditions, approximately two-thirds of the signal from the surface was detected in a 1-inch-diameter circle directly in front of the IRT-P5. It is likely that most of the recorded surface temperature data came from a single leaf, but some came from surrounding leaves. The target was a leaf or leaves that represented the top portion of the plant canopy. For the purposes of this article, we refer to the surface temperature as “leaf surface temperature.” Surface temperature can change as a function of leaf size (Nobel, 1991). Specifically, as leaves get larger, their boundary layer increases and loses energy slower through conduction and convection. We would expect, then, that any stunting of leaves would assist in cooling leaf. However, the magnitude of change is small because the impact of leaf size is determined by the square root of leaf width and the amount of change in a geranium plant is likely to be only a few millimeters.

Leaf surface temperature and environmental data were measured once a second for 20 to 30 s while the plant was at the measurement station. These data were then averaged for a single measurement for that plant on a given day. A shorter measurement period could have been used for similar results. Our thermocouple-based “switch” (described previously) was convenient, but occasionally took several additional seconds to cool, which increased the sample period for some samples.

Plants were arranged on greenhouse benches in a randomized complete-block design with four replications per treatment and two plants per replicate. The experiment was performed once in 2005 and again in 2006. In 2005, the average photosynthetic photon flux (PPF) was 61 ± 39 μmol·m−2·s−1 (range, 20 to 196 μmol·m−2·s−1) with an average shortwave radiation of 41 W·m−2 ± 26 (range, 11 to 164 W·m−2). This is in the range of commonly reported light compensation points for plant canopies of 50 to nearly 200 μmol·m−2·s−1 (Evans and Farquhar, 1991; Wheeler et al., 1993) and well below minimum growth guidelines for floriculture crops (Fisher and Both, 2004). This production environment was not considered to be representative of what is typical for geranium production and this data set was not considered. In 2006, an effort was made to increase PPF and shortwave radiation through placement of the measurement station within the greenhouse, use of uniform, electric light sources to supplement sunlight, and measuring plants in the middle of the day. Therefore, the results from the 2006 experiment are presented here. The effect of pathogens on leaf surface temperature and other parameters was determined by the analysis of variance using the Statistix 8 Analytical Software (Analytical Software, Tallahassee, FL).

Pythium ultimum was the only pathogen that consistently caused significant disease symptoms and a slow, steady rise in temperature compared with the control after day 14 (Fig. 3). After this point, temperature rose an average 0.35 °C per day. There were no differences in the other environmental parameters between control and P. ultimum-inoculated plants in a given day (Fig. 3B–D).

Twenty-eight days postinoculation, root systems of P. ultimum-infected geraniums were decomposing and showed extensive damage (Fig. 4). Plants infected with P. ultimum were the smallest and had significantly lower shoot weight than all other treatments suggesting that this treatment caused more root infection.

Visible disease symptoms in the form of chlorosis and stunted growth were not evident until 22 d after inoculation and only in plants challenged with P. ultimum. Six weeks after inoculation, growth in all the plants, except for the ones inoculated with P. ultimum, was comparable to control (Fig. 5A–D). Pythium aphanidermatum is often associated with greenhouse production and was reported to be pathogenic on geranium (Moorman et al., 2002). However, it produced no disease symptoms on geranium in this study. This could be the result of the host specificity of the isolate tested (Stephens and Powell, 1982) or to the somewhat cool temperatures in our greenhouse that were less favorable to P. aphanidermatum in comparison with P. ultimum (Ben-Yephet and Nelson, 1999).

When geranium is maintained under optimum growing conditions, it becomes difficult to visually diagnose symptoms resulting from exposure to pathogens such as P. ultimum. As a result, the observed effect of the pathogen on its host can be negligible or largely minimized, although it might be present. Many factors such as water stress, nutrient deficiency, insects, and diseases influence the leaf temperature (Jackson, 1986). In this study, all of these factors, except disease, were controlled or standardized on each day, yet leaf temperatures differed between the control and P. ultimum-inoculated plants.

We conclude that the increase in leaf surface temperature in response to stress was incited by the exposure of geranium to pathogens. This is the first report to our knowledge that addresses the use of environmental sensors to detect disease stress on a geranium–water mold pathosystem. We believe that the use of leaf surface temperature could be a reasonable nondestructive, noninvasive technique to predict plant stress resulting from infection by pathogens before symptom appearance. However, leaf temperature should only be used in conjunction with other tests and observations to rule out other factors contributing to a rise in leaf temperature.

The difference in (A) temperature between control and Pythium ultimum-inoculated plants, (B) photosynthetic photon flux, (C) relative humidity, and (D) shortwave radiation of the environment during the measurement period. Two weeks after inoculation, leaf temperature of P. ultimum-inoculated plants began to be warmer than the control plants and continued to rise for the duration of the trial. Disease symptoms were initially visible 22 d after inoculation. Error bars are ± 1 se of the mean (n = 4). The environment did not differ between control and P. ultimum-inoculated plant measurement periods except for a slight, but significant, difference on the final two measurements; (1.8 × °C) + 32 = °F, 1 W·m−2 = 0.0929 W/ft2. 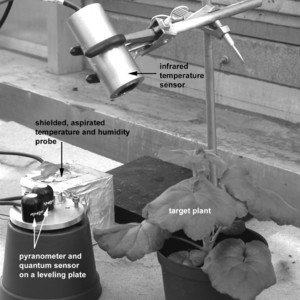 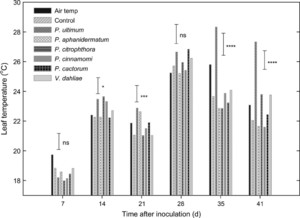 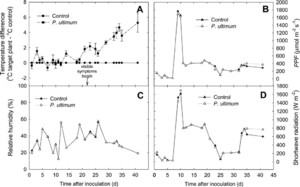 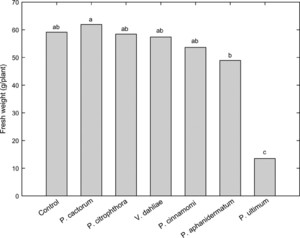 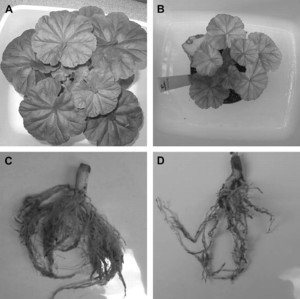