Bush tea is a popular beverage used as herbal and medicinal tea for cleansing or purifying blood and for treating boils, headaches, infested wounds, and cuts (Mabogo, 1990; Van Wyk and Gericke, 2000). The solution may also be used as a foam bath (Mabogo, 1990). The foam bath brew can also be used as a lotion dabbed on to boils, skin eruptions, or cuts (Roberts, 1990). 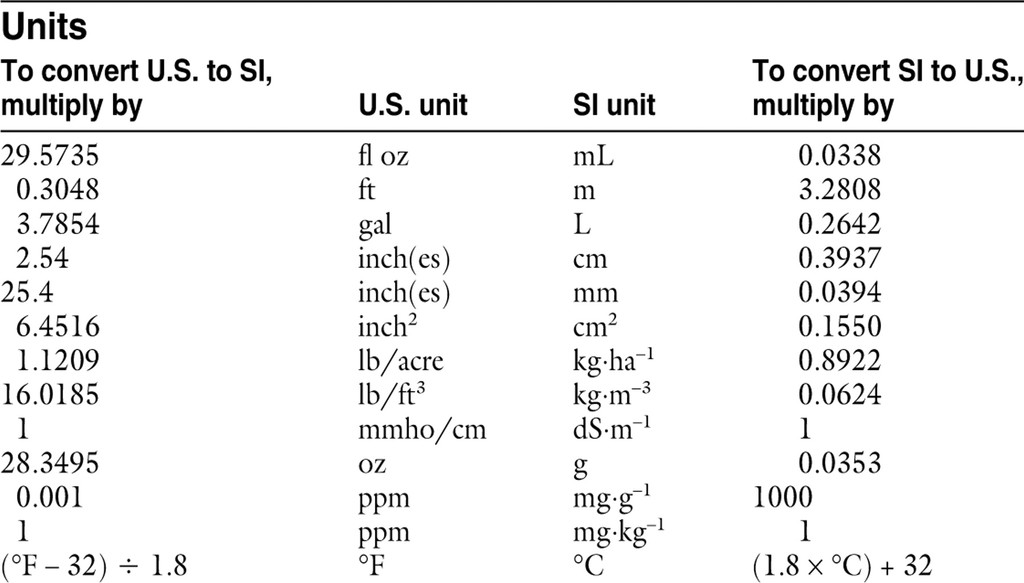 Single applications of N, P, and K have been determined by Mudau et al. (2005, 2006) for bush tea. Mudau et al. (2005, 2006) found that single applications of 300 kg·ha−1 N, 300 kg·ha−1 P, and 200 kg·ha−1 K maximized bush tea growth and leaf total polyphenols in all four seasons. According to Hirasawa et al. (2002), total polyphenols are the primary indicator of antioxidants. It is, however, unknown whether simultaneous application of N, P, and K would result in interactions of these nutrients that could further improve growth and increase total leaf polyphenol in bush tea in all four seasons. In other herbal teas, such as green tea (Camellia sinensis) (Chiu, 1989) and honeybush (Cyclopia intermedia) (Du Toit et al., 1998), it is known that quality is related to season.

The plant materials of bush tea are only harvested from the wild. Presently, there are no fertilizer guidelines on cultivated bush tea. The objective of this study was to determine the effects of treatment combinations of N, P, and K nutrition on growth characteristics and concentration of leaf total polyphenols in bush tea.

The study was carried out in Morgenzon (Louis Trichardt, Limpopo Province, South Africa), a commercial nursery [lat. 23°N50′E, long. 30°S17′E, altitude 610 m; subtropical-type climate (i.e., summer rainfall and cold, dry winter)]. The annual rainfall is 650 mm/year with temperatures ranging from 13 to 18 °C in winter and from 27 to 39 °C in summer. On 13 Nov. 2003, plant materials for autumn trial were collected from Venda (Limpopo Province, South Africa), and 1200 cuttings were dipped into a rooting hormone powder [0.3% 4-indole-3-butyric acid (IBA), Seradix No. 2; Bayer, Pretoria, South Africa] to encourage root formation. Cuttings were established in sand culture in seed trays. The mist bed was supplemented 24 h per day with misting and fogging systems, which work automatically depending on the humidity of the greenhouse. The mist bed was 5 × 1.5 m and 1 m high supplied with an automated misting system operating through misting nozzles. Greenhouse temperatures were recorded by a datalogger (3020T; Electronic Control Design, Mulino, Ore.). The measured mean minimum and maximum temperatures in the mist bed were 12.6 and 29.6 °C (autumn), 9 and 27.8 °C (winter), 13 and 34.2 °C (spring), and 17 and 34.7 °C (summer). The planting materials for other seasons [winter (13 Jan. 2004), spring (13 Mar. 2004), summer (13 May 2004)] were also propagated, and those healthy, vigorous, and uniform in stem girth were selected. For all seasons, rooted cuttings were transplanted into 1-L polyethylene plastic bags (Polytechnic, Johannesburg, South Africa) filled with sand (Hygrowmix; Kynoch, Pretoria, South Africa) and placed into a hardening chamber held at 20 °C for 3 months. The transplants were grown with natural photoperiod extended to 16 h by 100-W, high-pressure sodium lamps (250 μmol·m−2·s−1 PPF).

From each replicate at harvest [autumn (30 May 2004), winter (30 Aug. 2004), spring (30 Nov. 2004), and summer (28 Feb. 2005)], plant height, number of branches, number of leaves, number of flowers and flower buds (autumn and winter), stem girth, fresh and dry root weight, fresh and dry stem weight, leaf area [measured by an area meter (LI-3100; LI-COR, Lincoln, Nebr.)], and fresh and dry shoot weights were recorded. At the end of each season, all plants were harvested and leaves were washed with distilled water and freeze-dried for percent N, P, and K analysis and assay of total polyphenols.

Total N was determined on a rapid-flow analyzer (series 300; Alpchem, Wilsonville, Ore.). Phosphorus and potassium were analyzed using the method by Adrian (1973). Leaves from each replicates were freeze-dried and finely ground to pass a 20-mm mesh screen. From the sieved material, 0.5-g sample was mixed with 5-mL acetone for 2 h in a shaker, and centrifuged for 5 min at 4000 gn. The supernatant was carefully decanted, and the extraction procedure was repeated three times on precipitates. Three supernatants were combined, and a volume of 15 mL with 75% acetone was prepared. The precipitates were discarded. Concentrations of total polyphenol in leaves were determined using the Folin-Ciocalteu method (Waterman and Mole, 1994). In this method, 0.5 mL of the extracts was added to a 50-mL volumetric flask containing 2 mL of deionized water. The contents were swirled to mix, and 0.5 mL of the solution was pipetted and mixed into a test tube containing 2.5 mL of Folin-Ciocalteu phenol reagent (Sigma-Aldrich, Johannesburg, South Africa). Sodium carbonate solution (20 g per 100 mL of deionized water) was prepared, and 7.5 mL of the sodium carbonate solution was added to the mixture. The solution was mixed and allowed to stand for 2 h for completion of the reaction. Concentration of total polyphenols in the samples was measured as absorbance readings at 760 nm using a spectrophotometer (Cecil Instruments, Cambridge, U.K.) and expressed in milligrams tannic acid equivalent (TAE) per gram, dry basis. The assay was standardized with tannic acid in the range from 1 to 0.02 mg·g−1. Data for each season were analyzed separately using the GLM procedure of SAS (version 8.0; SAS Institute, Cary, N.C.). Mean comparisons were performed using Duncan's multiple range test procedure.

Similar results were obtained for autumn, summer, winter, and spring. Therefore, only the autumn results are reported throughout as a representative of the other pooled seasons. There were no interactions with seasons and treatments applied. Application of a combination of N300, P300, and K200 increased fresh and dry shoot weight, number of leaves, and leaf area (Table 1), probably due to nutrients partitioned toward the enhancement of vegetative growth. When single applications of N, P, and K at rates of N300, P300, and K200 were applied alone, Mudau et al. (2005, 2006) reported that growth and total polyphenols were maximized. No significant differences in plant height, number of branches, number of flower buds, stem girth, fresh and dry root weight, and fresh and dry stem weights due to treatment combinations were observed (data not presented).

Response of growth characteristics of bush tea to N, P, and K nutrition during autumn. 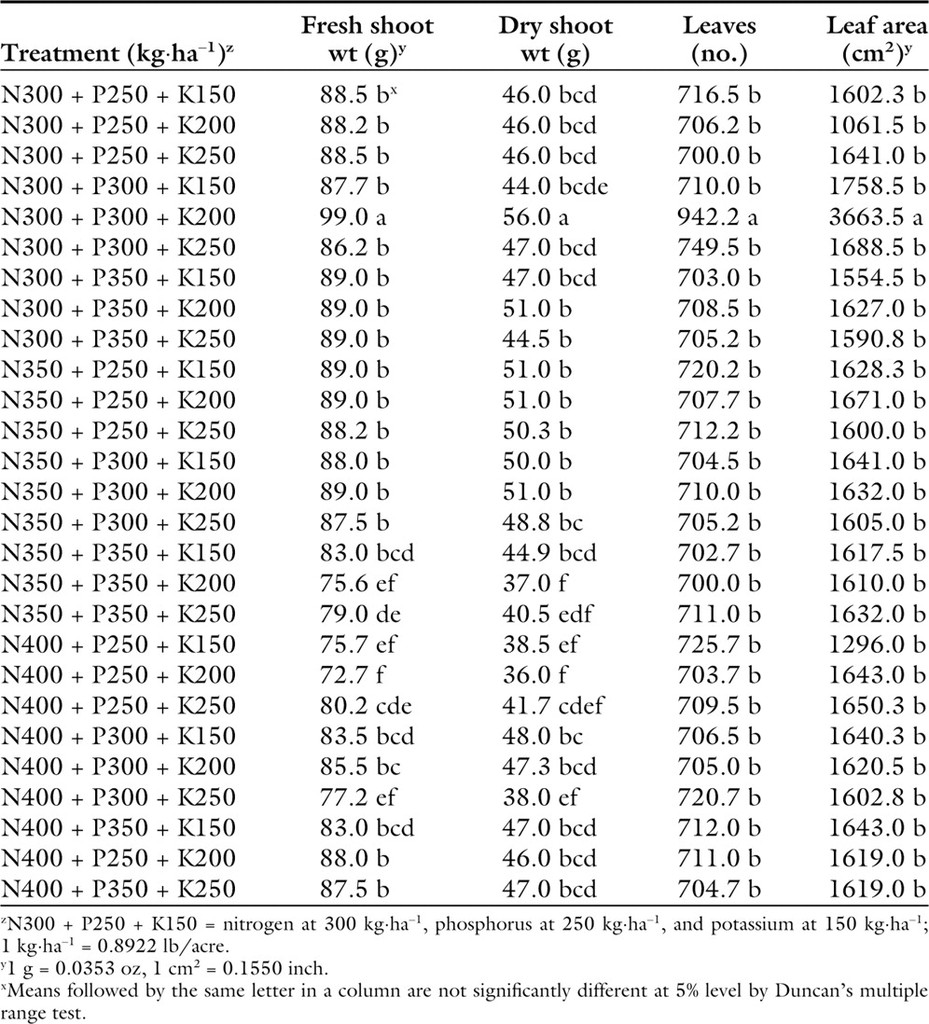 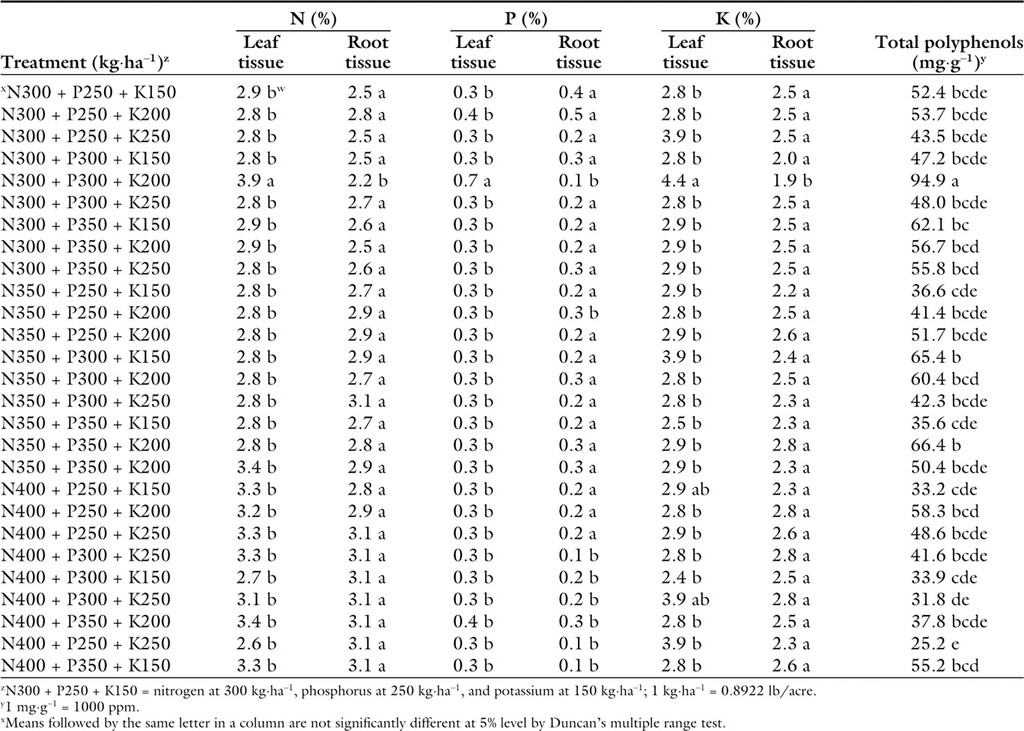 Treatment combinations of N300, P300, and K200 increased the concentrations of total polyphenols (Table 2) compared with other applied treatments, possibly due to the increase in percentage of leaf tissue N, P, and K (Table 2). However, the treatment-combination approach of fertilizer applications in Tables 1 and 2 doubled the growth and total polyphenol concentrations of bush tea in comparisons with single applications of N, P, and K reported by Mudau et al. (2005, 2006). This was largely attributed to the increased dosage of combinations of N300, P300, and K200 as compared with 1% application of monoammonium phosphate (MAP) (12% N, 27% P, except for P trial), urea (46% N, except for N trial), and potassium chloride (except for K trial) in single applications of N, P, and K (Mudau et al., 2005).

In other herbal teas, such as green tea, few published reports have studied multiple combinations of N, P, and K. Ruan et al. (1999) reported that caffeine and concentration of total polyphenols significantly increased in black tea with K applications alone, with the optimum level at 150 kg·ha−1 K during spring and autumn. Similar responses were also evident in green tea, where concentrations of total polyphenols and other aromatic compounds, such as (Z)-3-hexenyl hexanoate, farnesene, and nerolidol, were considerably improved with 300 kg·ha−1 K applied as potassium sulfate (Ruan et al., 1999).

In conclusion, treatment combinations of N300, P300, and K200 were superior to other combinations in increasing fresh and dry shoot weight, number of leaves, leaf area, and the concentration of total polyphenols in bush tea. It appears, therefore, that the effect of single applications of N, P, and K have effects similar to a combination of these nutrients for bush tea plant growth and production of total polyphenols, but the actual amount that the growers could apply will depend on cost and economic analysis of inputs versus returns on the crop. Treatment combinations applied did not consistently affect concentration of leaf N, P, and K during the study period, although the treatment that received a combination of N300, P300, and K200 always had the highest concentration of leaf tissue N, P, and K and the lowest concentration of root tissue N, P, and K. There were no differences in plant height, number of branches, number of flower buds (autumn and winter), stem girth, fresh and dry root weight, and fresh and dry stem weight due to treatment combinations. Therefore, further studies on economic analysis of the inputs on bush tea production need to be investigated.