The increased popularity of jujube (Ziziphus jujuba) combined with the difficulty of grafting have limited supplies of grafted trees in the United States. From 2011 to 2020, grafting was practiced for cultivar amplification after importation and cultivar trials in frost-prone northern New Mexico. Grafting success was related to not only grafting techniques but also climate factors. Bark grafting, whip/tongue grafting, and cleft grafting were commonly used in nurseries. Low temperatures had a critical role in jujube grafting success in marginal regions and were more important than the grafting technique. If frost occurs before or near the leafing time, then grafting should be delayed until the rootstocks are determined to be healthy and alive. If frost occurs after grafting, then grafting failure and/or thin and small plant percentages increased. If only branchlets appear after grafting, then pinching branchlets could stimulate new shoot growth.

The increased popularity of jujube (Ziziphus jujuba) combined with the difficulty of grafting have limited supplies of grafted trees in the United States. From 2011 to 2020, grafting was practiced for cultivar amplification after importation and cultivar trials in frost-prone northern New Mexico. Grafting success was related to not only grafting techniques but also climate factors. Bark grafting, whip/tongue grafting, and cleft grafting were commonly used in nurseries. Low temperatures had a critical role in jujube grafting success in marginal regions and were more important than the grafting technique. If frost occurs before or near the leafing time, then grafting should be delayed until the rootstocks are determined to be healthy and alive. If frost occurs after grafting, then grafting failure and/or thin and small plant percentages increased. If only branchlets appear after grafting, then pinching branchlets could stimulate new shoot growth.

Jujube (Ziziphus jujuba), a deciduous fruit tree grown in China for more than 4000 years, bears very nutritious fruit that have been consumed as food and widely used in traditional Chinese medicine (Yao, 2013). Jujube is gaining popularity with commercial growers and home gardeners in the United States because of its low maintenance requirements, nutritious and tasty fruit, and health benefits. However, as the demand for jujube trees steadily increases, the tree supply from nurseries is becoming a limiting factor. Jujube tissue culture propagation is progressing (Y. Chang, personal communication), but grafting is still the dominant propagation method.

Jujube grafting became popular in China in the 1980s. Before then, suckers (small plants from mother plants with root attached) collected from established jujube trees were commonly used for new plantings (Guo and Shan, 2010). Bark grafting, cleft grafting, side grafting, and whip/tongue grafting have been popularly used in nurseries in China (Guo et al., 1994; Shi et al., 2006; Wu et al., 2018). Bark grafting and cleft grafting were common in top-working to change cultivars (Li, 2009). People in rural areas also graft jujube cultivars to sour jujube (Ziziphus spinosa) in the wild to increase productivity (Wang, 2014). Compared with traditional jujube-producing provinces, grafting in place was more popular than planting grafted trees in the newly emerged jujube production areas such as Xinjiang in China (Chai et al., 2016; Ma et al., 2019). There are hundreds of publications about jujube grafting in China, with the majority being popular science reports or experience summaries. Published research of this topic is limited (Li, 2009; Shi et al., 2006; Wu et al., 2018). In the United States, an extension publication about jujube grafting was published in 2014, and it included a grafting video link (Yao, 2014). A similar extension publication was published in western Australia (Johnstone, 2020).

The jujube program at the New Mexico State University (NMSU) Sustainable Agriculture Science Center in Alcalde, NM, started in 2010. In Spring 2011, the imported scionwood from China was grafted onto sour jujube rootstocks. Then, different types of grafting techniques were used for imported cultivar amplification, cultivar propagation for cultivar trials, top-working, or other reasons. This report is a summary of the successes and problems during 10 years of grafting experience and a discussion of the effects of environmental factors on grafting in Alcalde, NM.

One-year-old primary shoots were the main source of scionwood for all cultivars (Yao, 2014). If there was a shortage of scionwood for some cultivars, then the basal one or two nodes of side branches or 2-year-old branches were used as scionwood. Shoot diameters of ≈0.3 inches or larger were preferred. Branches with a diameter of 0.5 inches or larger were difficult to cut and use for grafting, but occasionally they were used for whip/tongue grafting. Scionwood was collected during mid to late March, waxed, and stored at 40 °F.

After 1 or 2 years of growth in the field, sour jujube seedlings were ready for grafting. The soil was Fruitland sandy loam (coarse-loamy, mixed, calcareous, mesic Typic Torriorthents) (U.S. Department of Agriculture, 2008). The field was irrigated with drip irrigation (twice per week) or flood irrigation (once per week). Fertigation (24N–3.5P–13.3K) was applied through drip irrigation at 2 lb/200 ft of row, three to four times per year, from June to July. For flood-irrigated plots, urea and complete fertilizer (13N–5.7P–10.8K or others; applications varied from year to year) were applied at ≈4 to 5 lb/200 ft of row. Seedlings were also fed dissolved 24N–3.5P–13.3K fertilizer at a rate of 1 tablespoon/gal, 2 cups/plant, two to three times per season. Seeding beds were 6 ft apart, with double rows in the middle of the beds 1ft apart. Plants were 2 ft apart in rows and staggered between rows.

The grafting dates varied from mid to late May, when the rootstock’s new growth was typically ≈1 to 1.5 inches in length. In 2014, with severe late frost before grafting, the grafting was delayed to late May to early June. In 2020, there was a frost after grafting, and another round of grafting took place in mid-June.

Grafting take rates were counted 4 or 5 weeks after grafting and again in late July/August. A final count was performed in the fall. Large plants and small plants (3–4 and 1–3 ft in height, respectively) were counted separately.

After grafting, new growth on the rootstocks was removed two to three times at 14-d intervals. The new shoots from scionwood were supported by 4-ft bamboo stakes when they reached 6 to 8 inches. New shoots were tied to sticks with a plant tie stapler as they grew.

From 2011 to 2020, grafted plants were used for cultivar propagation, cultivar trials at NMSU (Yao et al., 2019, 2020), or other locations. In 2014 and 2016, more than 40 cultivars were propagated for cultivar trials at the NMSU Sustainable Agriculture Science Center, the NMSU Agricultural Science Center in Los Lunas, NM, and the NMSU Leyendecker Plant Science Center in Las Cruces, NM (Yao and Heyduck, 2018; Yao et al., 2019, 2020). Because each cultivar had limited plants, grafting take rates were counted for all cultivars together instead of per cultivar. The sample sizes ranged from 100 to 400 from 2011 to 2020.

Weather data were collected from mid-April to the mid-June from 2011 to 2020, at the NMSU Sustainable Agriculture Science Center.

Mid to late May comprised a favorable window for jujube grafting in northern New Mexico. If grafting happened early (first week of May), then partially active (slip) cambium layers occurred, which made bark grafting difficult but did not affect whip/tongue grafting. In 2020, late grafting in mid-June took well but did not grow well. Wu et al. (2018) reported that 17 Apr. was the best time among the three grafting dates of 6 Apr., 17 Apr., and 2 May in Shijiazhuang, Hebei, China. Suitable grafting times varied from location to location (Li, 2009; Wang, 2014). Areas with long growing seasons had a longer grafting window than areas with shorter growing seasons.

Grafting success depended on the grafting techniques and weather conditions. Normally, scionwood buds sprouted 7 to 10 d after grafting. It could take much longer if the temperature stayed cool after grafting, as in 2019. Daily minimum temperatures from mid-April to mid-June in Alcalde, NM, are presented in Fig. 2.

Low temperatures had a critical role in grafting success. Frost events before and after grafting consistently caused graft failure (Table 1, Fig. 2). In 2020, a temperature of 29.5 °F on 23 May killed the rootstock cambium layer and bark, greatly reducing the grafting take rate. With a damaged cambium layer for rootstock and scionwood, 50% of grafted plants did not take. Among those that did take, 20% of them did not heal properly and ended as smaller plants in 2020. The 50 plants grafted in mid-June took, but they ended as thin and small plants in 2020. In 2019, the minimum temperature was between 32 and 36 °F for 2 weeks from 20 May to early June (Fig. 2), which delayed scionwood sprouting and reduced the grafting take rate (Table 1).

In 2014, there were repeated, severe late frosts (late April to mid-May) (Fig. 2) before grafting that killed the rootstock cambium layer and bark (Fig. 3). Grafting was delayed 2 weeks to late May/early June. With some partially damaged rootstocks, the grafting success rate was reduced, resulting in some smaller plants (Table 1).

Based on those data, it is recommended to graft when the threat of frost has passed in areas with short growing seasons. Otherwise, grafting failure and a high percentage of smaller and weaker plants are likely.

Occasionally, grafts succeeded, but only branchlets emerged without new shoots. Without intervention, only a few strong woody branchlets resulted. Continued pinching of branchlets could stimulate new shoot emergence (Fig. 4). In other literature, this technique was also mentioned along with pinching of the main shoots and side branches to stimulate early fruit production (Chai et al., 2016; He et al., 2013; Ma et al., 2019).

Cultivar growing habits in the nursery

During the grafting year, the Li group cultivars, Li, Shanxi Li, and Redland, typically had taller and larger plants than others. The cultivars Honeyjar, Fucuimi, and Russian 2 were relatively shorter than others. Plants of ‘Lang’ were shorter but well-developed compared with ‘Li’. ‘Kongfucui’ also had strong nursery plants, and ‘Maya’ and ‘Sugarcane’ had relatively thinner plants. The cultivar Sihong had a lower grafting take rate than others, which could be because of its shoot/bud structure. ‘Sihong’ has strong and upright side branches, but its buds might not be as fully developed as other cultivars. Both scionwood and bud quality should be determined before grafting for ‘Sihong’.

Because long side branches are not desired in nursery plants, pinching secondary branches after three nodes can reduce nutrient loss and enhance the retained sections. Large nurseries often remove all side branches to ease operation and shipping in the fall. Retaining one or two nodes for those side branches 2 ft aboveground is recommended, especially for those nurseries targeting local markets.

In summary, frosts before and after grafting greatly impact grafting success and subsequent plant growth. Grafting time can be delayed to avoid frosts and ensure that the rootstocks are healthy. If frosts do occur after grafting, then graft failure or a high percentage of smaller plants may result. Pinching branchlet tips after grafting can stimulate new, desirable shoot development.

Damaged jujube rootstocks and scionwood after repeated frosts in 2014: (A) split bark; (B) damaged cambium layer and bark; (C) graft did not take and generated numerous suckers on rootstock; (D) graft partially took, with branchlets only, numerous suckers (removed), and detached bark on the rootstock.

After jujube grafting, pinching branchlets stimulated new shoot growth: (A) before and (B) after pinching (black arrows) and new shoot emerging (red arrow). 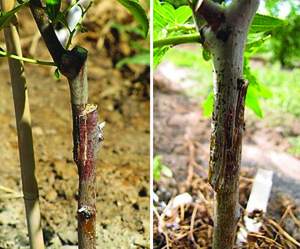 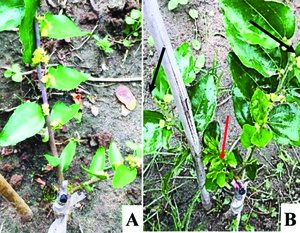