The high value and relatively short production schedules of bedding plants demand intensive production methods such as frequent fertigation (Roude et al., 1991). Historically, commercial greenhouse growers in the United States have applied relatively high nutrient concentrations (e.g., 250–350 ppm N) to maximize growth and reduce the production time of crops, such as petunia (Petunia ×hybrida), that are considered to be “heavy feeders” (Dole et al., 2002; Zhang et al., 2012). Additionally, fertilizer is relatively inexpensive; therefore, growers have tended to err by applying excess fertilizer to avoid nonoptimal growth and nutritional deficiencies. However, excessive fertilizer application results in nutrient runoff, which has become an increasingly important environmental concern because of the potential nitrate and phosphate contamination of groundwater (Klock-Moore and Broschat, 1999). Moreover, the amount of N applied to greenhouse crops is typically greater than those used for field crops on an area basis (Martín et al., 2007).

Growers have been motivated to reduce the amount of fertilizer applied to their crops because excess nutrients do not necessarily translate to higher profits for ornamental production (Cardarelli et al., 2010). Nutrient concentrations of 100 to 150 ppm N are now quite common in commercial bedding plant production. An additional benefit of reduced fertilization rates is the reduction in plant growth rates, which means that the amount of plant growth regulator applied to bedding plants can be reduced. Although these trends in greenhouse production are typically viewed as positive, one recent observation is that consumer performance has been negatively impacted (M. Kramer, personal communication). For example, plant growth after retail purchase is often limited because consumers frequently fail to fertilize their plants. Lower fertilization rates during production reduce consumer performance because of the lack of nutrients in the plant and the growing substrate at the point of sale.

In this study, we propose solutions that growers have the ability to control and implement because changing consumer practices and knowledge is a daunting task. Petunia was chosen as the subject of the experiment because it is one of the most popular bedding plants. Approximately 25 million pots of petunias were sold in 2015 in the United States; petunia ranks fourth among bedding/garden plants, followed by geranium, pansy, and impatiens (U.S. Department of Agriculture, 2016). Three fertilizer delivery strategies were assessed for their potential to maintain adequate growth of petunia during greenhouse production while improving plant growth during the postproduction environment. The fertilizer delivery strategies used included CLF, CRF, and PF treatments. Constant liquid fertilization is the standard industry practice for greenhouse production, whereas CRF and PF provide alternative approaches. Controlled-release fertilizer refers to a fertilizer designed to gradually release nutrients to the growing substrate over time and is most often used for production outdoors, where CLF is not practical because of the lack of control over water supplied during rainfall events (Medina et al., 2008; Tian and Saigusa, 2002). Pulse fertilization refers to a one-time fertigation application performed before placing the plants in a postproduction environment and at a higher rate than the CLF rates applied during production. Both the CRF and PF methods have the potential advantage of providing nutrients to the plant after the greenhouse production phase, thus improving postproduction performance compared with the conventional CLF method. The objective of this research was to evaluate the effects of CLF, CRF, and PF on petunia growth and flowering in the production and subsequent postproduction environments.

Plug seedlings [288 cells/flat, three and four flats for replication (Rep.) 1 and 2, respectively] of ‘Pretty Grand Red’ petunia were obtained from a commercial grower and transplanted to six-pack plastic containers (six cells/container, 175 g/cell, 108 and 144 six-packs for Rep. 1 and 2, respectively) filled with a standard growing substrate that was custom-formulated without a fertilizer starter charge (Fafard 3B; Sun Gro Horticulture, Anderson, SC). The plants were placed in a glass greenhouse, and the initial irrigation event was performed with tap water after transplanting the seedlings.

Plants were fertigated throughout the greenhouse production phase with a CLF solution of 17N–2.2P–14.1K–3Ca–1Mg [4.9% ammonium–N, 12.1% nitrate–N (Plantex Solutions; Master Plant-Prod, Brampton, ON, Canada)] to deliver solutions containing 0, 50, 100, or 200 ppm N. Micronutrient concentrations were adjusted using a micronutrient blend [7% iron (Fe), 3.5% manganese (Mn), 3.5% zinc (Zn), 1.75% boron (B), 1.75% copper (Cu), and 0.7% molybdenum (Mo); Greencare Water-Soluble Micronutrient Blend; Blackmore Co., Belleville, MI] so that all treatments received 1 ppm Fe with each fertigation application. The container capacity was 103 g/cell, which was determined by irrigating a container until the substrate was completely saturated and water stopped dripping from the container. Then, the substrate was placed in an oven at 70 °C for 1 week before re-weighing the substrate to calculate the weight of water held by the substrate at the container capacity. The six-pack containers were checked daily and manually fertigated when the substrate color started to turn a lighter brown (every ≈3–4 d) during the production phase. The fertigation volume was targeted to reach 80% of container capacity to minimize leaching of nutrients from the container. To accomplish this, the plant-container-substrate-water weight was measured at each fertigation event. The volume of solution to be added was calculated by subtracting the weight of the plastic, dry substrate, and plant from the total weight of the plant-container- substrate-water weight, assuming the substrate was at container capacity. The plant weight changed weekly; therefore, a representative plant was removed from the substrate each week and weighed to account for this change. The volume of fertilizer solution applied at each irrigation to bring the container up to 80% container capacity was recorded for each six-pack container at each irrigation event. The wholesale cost for the 17N–2.2P–14.1K–3Ca–1Mg fertilizer was $14.75/25 lb.

The chlorophyll content of the petunia leaves was estimated weekly (Chlorophyll Meter; Apogee Instruments, Logan, UT). The leaves sampled were the largest uppermost leaves that would fit in the meter (64 mm2). Substrate pH and electrical conductivity (EC) were measured weekly (Oakton PC 700 pH/conductivity meter; Cole-Parmer, Vernon Hills, IL) using the substrate occupied by two plants per treatment. The plants in the containers sampled for pH and EC were discarded. Substrate EC was obtained using the 1:2 (growth substrate:deionized water, v/v) method by adding 100 g of deionized water to a 50-g substrate sample. The date of the first open flower was recorded for each plant during the production phase. A destructive harvest was performed at the end of the production phase (20 or 31 DAT) and another was performed at the end of the postproduction phase (62 or 67 DAT) for each of the two experimental replications. Plant height and flower number per plant were measured on three plants per treatment at each harvest date at the end of the production phase and on four plants per treatment at the end of the postproduction phase. Plant height was determined as the distance from the surface of the substrate to the base of the calyx of the uppermost flower. The number of flowers per plant included senesced flowers and buds displaying flower color.

A tissue nutrient analysis was performed for the entire aboveground shoot, including the leaf, stem, and flowers, of plants harvested at the end of the production and postproduction phases. The dried and ground tissues were analyzed to determine the following nutrients: N, phosphorus (P), potassium (K), calcium (Ca), magnesium (Mg), sulfur (S), and Fe (USDA-Agricultural Research Service Laboratory, Toledo, OH). For Rep. 1, shoot fresh weight was measured at these two harvest dates. For Rep. 2, a substrate nutrient analysis was performed in addition to the tissue analysis; the leaf area (LI-3100 area meter; LI-COR, Lincoln, NE) and root fresh weight were also measured. Two plants were measured per treatment at each data collection date. Plant fullness was defined as shoot fresh weight divided by plant height. This parameter was considered a reasonable measure of plant quality because it reflects the density of the plant canopy and a compact, well-branched plant is usually perceived as having improved ornamental characteristics. 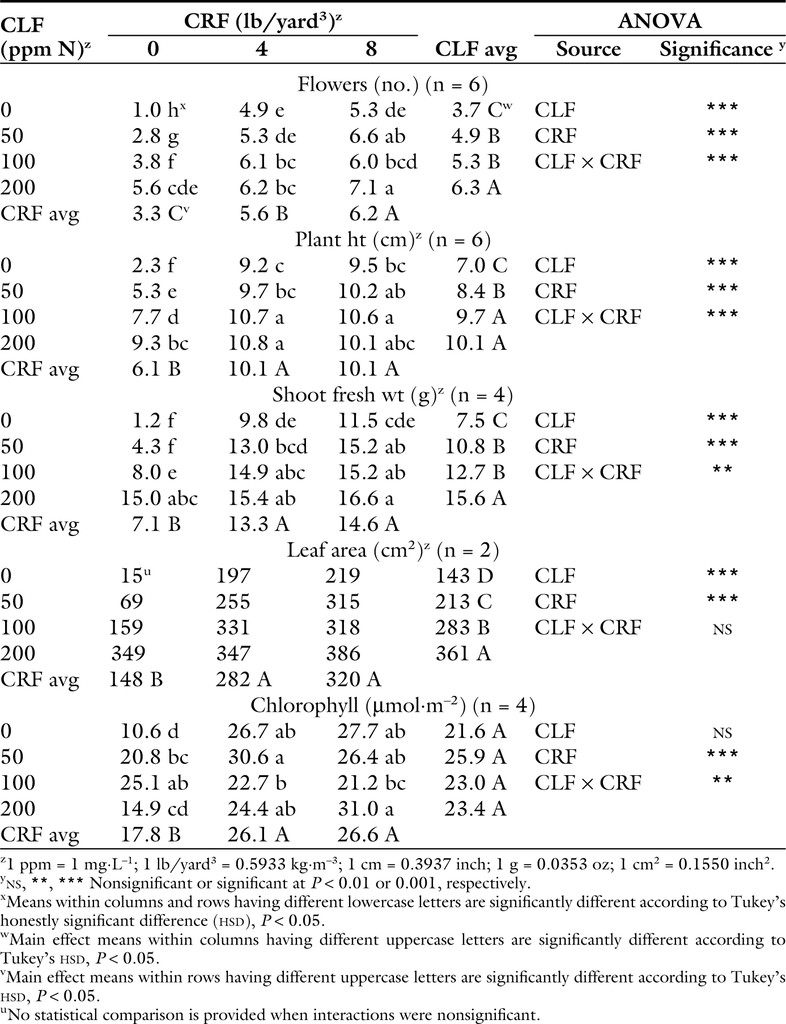 Substrate nutrient analysis performed at the end of the production phase (31 d after transplantation). Petunia was treated during the production phase with 0, 50, 100, or 200 ppm nitrogen (N) constant liquid fertilization (CLF) and 0, 4, or 8 lb/yard3 controlled-release fertilization (CRF). Plants were grown from 6 Oct. to 14 Dec. 2018. The amounts of N and water applied and the growing substrate electrical conductivity (EC) are noted for each of the 12 CLF × CRF treatments. A substrate nutrient analysis was performed for N, phosphorus (P), potassium (K), calcium (Ca), magnesium (Mg), sulfur (S), and iron (Fe).

A shoot tissue analysis showed that the CLF × CRF treatments that provided ≥6.2% N were not significantly different, suggesting that the plants had reached the maximum tissue concentration (Table 3). Only four treatments had significantly lower tissue N levels, namely the 0 ppm CLF × 0 or 4 lb/yard3 CRF and 50 or 100 ppm CLF × 0 lb/yard3 CRF. Tissue P levels followed a similar trend as N, with treatments yielding ≥0.6% P (not significantly different). The highest K tissue levels were only achieved with the 200 ppm CLF treatments. The Ca, Mg and Fe levels in the shoot tissue were unaffected by the fertilization treatments. Although Fe and Mg were well within the target tissue levels for petunia (reported as 0.36% to 1.37% Mg and 84 to 168 ppm Fe) (Mills and Jones, 1996), Ca was on the low end of the target range (1.2% to 2.8%) across all treatments.

Plant fullness, defined as shoot fresh weight divided by plant height, increased with increasing CLF, CRF, and PF (Fig. 1M–O). At the end of the postproduction phase, the maximum plant fullness was observed with the 100 ppm N CLF × 8 lb/yard3 CRF × 600 ppm N PF treatment, which was nearly double the value of the industry standard treatment of 100 ppm N CLF. 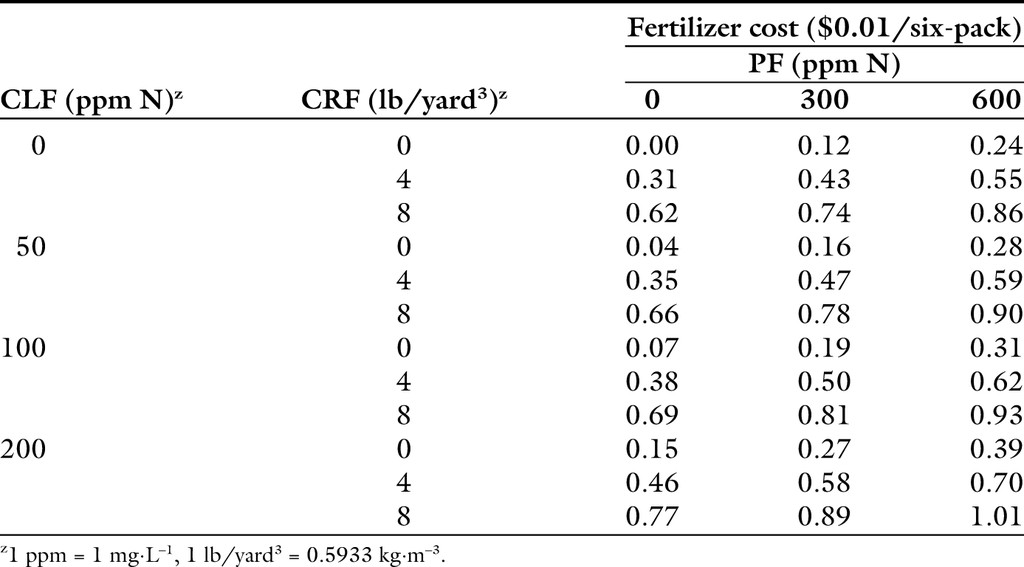 Lower CLF rates (<100 ppm N) produce unacceptably small or slow-growing plants. Higher CLF rates or the addition of CRF result in additional shoot growth that does not necessarily improve the ornamental appearance of the crop in the retail environment; however, it dictates the use of additional plant growth regulation methods. In other words, commercial growers have gradually reduced their CLF practices to the point of providing the minimal acceptable fertilizer levels. This approach is ideal from an environmental perspective because nutrient waste is minimized. Because lower rates of plant growth regulators are delivered, the consumer is more likely to purchase a plant that will not have significant plant growth regulator residual activity. However, from a postproduction performance perspective, delivering a plant with minimal nutrient levels can be problematic if the consumer fails to provide additional plant nutrition after the plant is purchased. The growth and development responses in the postproduction environment reported here underscore this dilemma.

This study provides insight into the potential use of two alternative methods of improving postproduction performance of petunia while maintaining the recent progress that bedding plant growers have achieved through the reduction of fertilizer and plant growth regulator application during production. The cost of the proposed alternative fertilization treatments would add <$0.01/six-pack; therefore, these options should be considered economically viable means of improving postproduction performance that will likely improve consumer satisfaction. 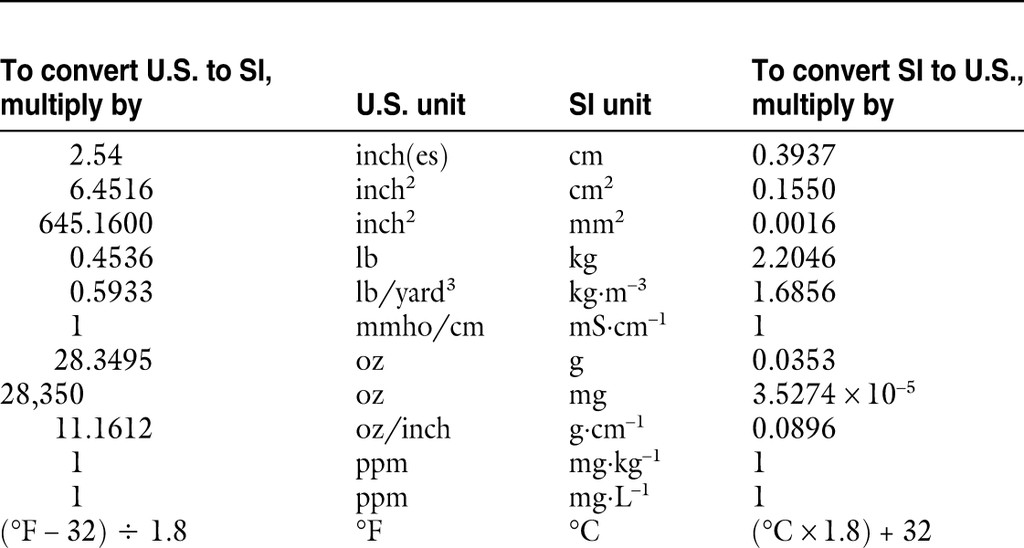 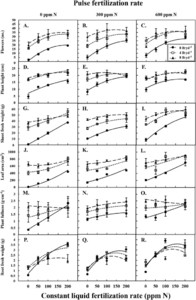