Volume/Issue:
Publish Ahead of Issue

‘lucía myrtea®’ and ‘victoria myrtea®’ are early-season cultivars of Japanese plum (Prunus salicina Lindl.) typology, both characterized by their low chilling requirements, so their adaptation is ideal for warm growing areas in the current context of climate change. High productivity, high-quality fruit and attractiveness are three characteristics common to both new cultivars. ‘lucía myrtea’ and ‘victoria myrtea’ stand out for their attractive dark purplish skin; their striking and intense red flesh; and their excellent taste qualities, with firm, juicy and aromatic fruit. Another remarkable characteristic is the floral self-compatibility in the case of ‘victoria myrtea’, uncommon in Japanese plum cultivars and especially interesting for farmers. These new cultivars will contribute to improve the availability of early, red-flesh plums for the fresh market.

‘lucía myrtea’ and ‘victoria myrtea’ resulted from the Japanese plum breeding program developed jointly by Centro de Edafología y Biología Aplicada del Segura-Consejo Superior de Investigaciones Científicas (CEBAS-CSIC) and Instituto Murciano de Investigación y Desarrollo Agrario y Alimentario (IMIDA) of Murcia, with which the ‘myrtea plums®’ series is initiated. The objectives of this breeding program are to obtain early-ripening cultivars, floral self-compatibility, high productivity, excellent taste, and resistance to sharka disease (Plum pox virus) as much as possible (Ruiz et al., 2016). Both cultivars resulted from open pollination of ‘Black Splendor’. Seeds obtained were germinated through in vitro embryo rescue according to the protocol described by Perez-Jimenez et al. (2021). This technique has allowed us to increase the percentage of viability of germination of seedlings. Seedlings were acclimatized in a greenhouse until they were planted in a high-density system in the experimental orchard located in Calasparra (Murcia, southeastern Spain; lat. 38°16'N, long. 1°35'W; elevation, 282 m). ‘lucía myrtea’ and ‘victoria myrtea’ were selected on their own roots and were then grafted onto ‘Mariana 2624®’ (P. cerasifera ×munsoniana) rootstock (three replicates each) in the same experimental orchard, in a plantation framework of 5 × 3 m, for agronomic evaluation.

Trees are vigorous with medium-upright habit for ‘lucía myrtea’ and moderately spreading habit for ‘victoria myrtea’. The leaves in both cultivars have a medium length and width of the blade, with an elliptical shape, and the upper surface is medium green. ‘lucía myrtea’ has a long petiole, whereas ‘victoria myrtea’ has a medium length. They both have nectaries positioned at the base of the blade and on the petiole, and the incisions on the edge of the leaf are bicrenate. Both cultivars are characterized by their high flower density. Their fruiting occurs on both spurs and long shoots. ‘lucía myrtea’ trees have a moderate need for thinning whereas ‘victoria myrtea’ needs intense thinning to obtain good fruit size (Table 1).

Description of tree and fruit traits of ‘lucía myrtea’ and ‘victoria myrtea’ and the traditional cultivars Red Beaut and Santa Rosa under experimental conditions in Calasparra (Murcia, southeastern Spain).

Chilling requirements have been assessed according to the methodology described by Ruiz et al. (2018). ‘lucía myrtea’ and ‘victoria myrtea’ need ≈30 and 25 chill portions respectively according to the Dynamic Model (Fishman et al., 1987a, 1987b) to break dormancy under our conditions in Murcia (southeastern Spain). Therefore, these new cultivars show very low chilling requirements—significantly less than any of the Japanese plum cultivars currently grown in Spain (Ruiz et al., 2018)—so its adaptation is ideal for warm growing areas, which is a key aspect in the current and future context of climate change. Full bloom for ‘lucía myrtea’ and ‘victoria myrtea’ occur in the second week of February, on average on 12 Feb. and 10 Feb., respectively—very early flowering dates. The blooming of the new cultivars is significantly earlier than traditionally cultivated varieties such as ‘Red Beaut’ and ‘Santa Rosa’ (Table 1). In addition, the intensity of flowering is very high in both ‘lucía myrtea’ and ‘victoria myrtea’.

‘victoria myrtea’ is self-compatible, as demonstrated in the field (by bagging branches) and in the laboratory (by observing pollen tube growth in 20–25 pistils), according to the methodology described by Guerra et al. (2009). ‘lucía myrtea’ is self-incompatible, with ‘victoria myrtea’ being the most suitable pollinator, given the coincidence in flowering dates. In addition, the identification of their S genotypes by polymerase chain reaction using the consensus primers PaConsIF-PaConsIR2 (Guerra et al., 2020) revealed for ‘lucía myrtea’ the band corresponding to the Se RNase allele and a band of 237 bp, whereas ‘victoria myrtea’ showed the Sc RNase allele and the same band of 237 bp. The noncoincidence of incompatible RNase alleles confirms the intercompatibility between both cultivars, which enables the pollination of ‘lucía myrtea’ with the pollen of ‘victoria myrtea’. Their intercompatibility was also verified in the field through controlled pollination between both cultivars.

The ripening date for ‘lucía myrtea’ in the experimental conditions of Murcia is between 1 June and 10 June, only a few days later than the early-ripening reference cultivar Red Beaut, and ≈20 d earlier than ‘Santa Rosa’ (Table 1), which makes it one of the first red-flesh plums of the season. The ripening date for ‘victoria myrtea’ is between 10 June and 20 June, coinciding with the end of harvesting of ‘lucía myrtea’, which is ≈10 d earlier than the traditional cultivar Santa Rosa (Table 1). Fruit of both cultivars ripen uniformly. In addition, fruit of both cultivars have shown optimal behavior at physiological maturity, with the fruit holding very well on the tree, which allows an extension of the harvesting period, as well as an optimal postharvest behavior.

At the commercial-maturity stage, the two new cultivars stand out for their excellent quality. Fruit of ‘lucía myrtea’ and ‘victoria myrtea’ are very sweet—≈16 °Brix on average, which is greater than the reference cultivars (Table 1). ‘lucía myrtea’ has a medium level of acidity (22.8 g malic acid/1000 mL juice), similar to ‘Santa Rosa’, and a little greater than ‘victoria myrtea’ (16.8 g malic acid/1000 mL juice), which is similar to ‘Red Beaut’ (Table 1). These characteristics, together with a high content of aromatic compounds, supply the fruit of both cultivars an excellent flavor and eating quality. In addition, the texture of the fruit of the two new cultivars is crunchy and juicy, both of which are features valued highly by consumers.

Publish Ahead of Issue

(Left) ‘lucía myrtea’ and (right) ‘victoria myrtea’ fruit in the tree and after harvesting. 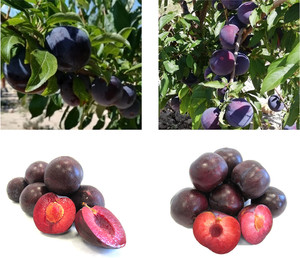