Iris is one of most famous ornamental plants in the world, and it is the largest genus in the family Iridaceae. The genus Iris comprises ∼280 species (Goldblatt and Manning 2008). There are ∼70,000 known cultivars, which can be mainly divided into bearded irises and beardless irises according to the appendants of the outer petals (Hu and Xiao 2012). As an outstanding group of beardless irises, Japanese irises are traditional plants with a history longer than 500 years in Japan, and they have been exported to the United States since the 1890s (Xiao and Hu 2018).

With graceful leaves and colorful flowers, Japanese irises are popular worldwide. They bloom in early summer (May to mid-June in Eastern China). These irises can be grown in US Department of Agriculture Zones 4 to 9. They grow best in full sunlight with sufficient irrigation, and they are usually grown in oriental gardens, theme gardens, water gardens, and containers.

Japanese irises have been artificially selectively bred from Iris ensata Thunb. in Japan since the late 1600s (Xiao and Hu 2018). There are ∼5000 cultivars of Japanese iris. I. ensata belong to the subgenus Limniris section Limniris Taush. (Wilson 2006; Zhao et al. 2000). This species is native to eastern China, northeast of China, eastern Russian, the Korean peninsula, and the islands of Japan (Xiao et al. 2015). Japanese irises have varied flower forms, including double, half-double, and single flowers. They also have the most diverse flower color patterns among all irises, including the self pattern, vein pattern, halo pattern, rimmed pattern, and brushed pattern (Xiao and Hu 2018). Consumers prefer a flower pattern in which the veins are lighter than the background color in the fall. The common flower colors of Japanese iris are purple, bluish violet, red-violet, and white, but there is a serious shortage of Japanese irises with true blue flowers. During the 1960s to 1980s, Shuichi Hirao generated a series of Japanese irises with flowers close to true blue, including I. ensata ‘Aizoshi’, I. ensata ‘Asa To Biraki’, I. ensata ‘Hekiho’, and I. ensata ‘Izu No Umi’ by using the old cultivar I. ensata ‘Asazumabune’ as parents. During the 1980s and 1990s, breeders at Kamo Garden in Shizuoka Prefecture, Japan, produced several Japanese iris cultivars with blue flowers, including I. ensata ‘Ogi No Mato’, whose flowers had white veins on blue petals. More recently, breeders in the United States generated some excellent blue Japanese irises, such as I. ensata ‘Lake Effect’, I. ensata ‘Banjo Blues’, and I. ensata ‘Koto Harp Strings’ (Mt. Pleasant Iris Farm 2015).

Here, we describe a new Japanese iris cultivar that produces attractive blue flowers with white veins. This cultivar was obtained by hybridization in 2018 at the Shanghai Botanical Garden. It flowers from early May to mid-May in Shanghai, China.

‘Daparo’ was selected from hybridization of I. ensata ‘Suizenji’ as the female parent and I. ensata ‘Asa To Biraki’ as the male parent at the Shanghai Botanical Garden. The parents were originally collected from Kamo Garden in Shizuoka Prefecture, Japan (https://kamoltd.co.jp). Japanese irises show high diversity in terms of flower color, size, and color pattern, as well as plant height. Evaluation of this new cultivar of Japanese iris confirmed its special ornamental characteristics and it was officially authorized for release as I. ensata ‘Daparo’ by the American Iris Society in 2021.

The selection process was conducted at the Nursery of Shanghai Botanical Garden in Shanghai, China. For each of the maternal plants, paternal plants, and new cultivar plants, 20 clones were planted in Sep 2020. The plants were grown in rows with 30 cm between plants in the experimental field. All plants were grown under full sunlight, and were fertilized similarly to other perennials. They were irrigated as required, with appropriately enhanced irrigation during vigorous growth and blooming periods. For each cultivar, the flowering period was recorded according to the dates of the first flower and the last within the population. Morphological characteristics, including plant height, leaf length and width, flower color, flower diameter, inner perianth length and width, outer perianth length and width, and the flowering period of the total population, were measured and recorded. Single flowers were evaluated for a randomized sample of five plants per cultivar. Leaf length and width were measured on the third leaf from the top of each plant. Flower colors were described according to the Royal Horticultural Society (RHS) Colour Charts (2015). The quantitative indexes of flowers were measured on the second day of full bloom. The data were analyzed using SPSS 17.0 (SPSS Inc., Chicago, IL, USA).

In Shanghai, the new I. ensata cultivar blooms from early May to mid-May. It is deciduous, and it begins to lose its leaves in late November. The height of I. ensata ‘Daparo’ ranged from 59.0 to 65.6 cm in our trial (Table 1). Like most Japanese irises, it produces one inflorescence branch with two flowers.

Morphological characteristics of Daparo, a new cultivar of Iris ensata.

Each flower of this new cultivar blooms for 2 to 3 d, and flowers open consecutively over the course of up to 2 weeks. ‘Daparo’ thrives in full sunlight. It has been sufficiently free of pests and disease ever since it has been grown at the Shanghai Botanical Garden in 2019. The cultivar has special ornamental characters with a unique flower color and pattern.

In summary, Daparo is a new cultivar of I. ensata that produces lovely large-sized (14.34 ± 0.48, n = 5) double blue flowers in early summer. It is an excellent choice as a garden plant, and it can be grown in containers. It can also be used to hybridize with different cultivars of I. ensata or other related species to obtain new colorful irises.

I. ensata Daparo is available for research or trials. Requests for samples of cloned plants may be addressed to Dr. Yue-E Xiao (e-mail: xiaoyuee@shbg.org), Research Center of Shanghai Botanical Garden, Shanghai, China. 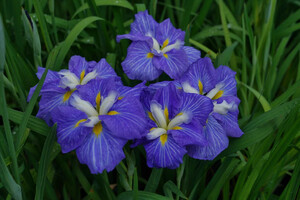