Gulf vervain (Verbena xutha) is a herbaceous perennial native to the southern United States. The species produces attractive spike inflorescences that provide a source of food for many pollinators. Besides botanical classifications, pollen morphology and cytological traits of this species have not been documented until now. Gulf vervain was found to have 2n = 42 chromosomes, with the first report of 2C nuclear DNA content of 2.95 pg. Convex-triangular pollen grains averaged 37.18 μm in diameter, with 84% stainability after cotton blue staining to estimate pollen viability. This information brings light to the genetic makeup of gulf vervain and may aid in future breeding programs.

Gulf vervain (Verbena xutha) is a herbaceous perennial native to the southern United States. The species produces attractive spike inflorescences that provide a source of food for many pollinators. Besides botanical classifications, pollen morphology and cytological traits of this species have not been documented until now. Gulf vervain was found to have 2n = 42 chromosomes, with the first report of 2C nuclear DNA content of 2.95 pg. Convex-triangular pollen grains averaged 37.18 μm in diameter, with 84% stainability after cotton blue staining to estimate pollen viability. This information brings light to the genetic makeup of gulf vervain and may aid in future breeding programs.

Gulf vervain is an ornamental plant native to the southern regions of the United States from Georgia to Texas (O’Leary et al. 2010). The species is usually found growing in sandy soils of dry stream banks and prairies (Sanders 2001). It produces upright spikes with small light-purple flowers that attract various pollinators. The species was first described in 1834 by Lehmann. To aid in its identification, Perry (1933) listed the coarse pubescent leaves, upright growth habit, and open spike as the plants’ differentiating features. O’Leary et al. (2010) found Verbena xutha to be recognizable by its “erect habit, large leaves, slightly trilobed or tripartite at the base, its abundant strigose pubescence and its long, lax inflorescences” (p 417). Lewis and Oliver (1961) further reported a chromosome number for the species of 2n = 42, similar to common vervain (Verbena officinalis), which has a polyploid series of 2n = 14, 28, 42, and 56 (Sanders 2001). The large chromosome number of gulf vervain suggests that it may contain more than one genome (Nesom 2010). Although botanical classifications have been published with reviews of the Verbenaceae family, no study has been conducted on gulf vervain to investigate its pollen and cytological traits. The objectives of this study are to characterize fully the chromosome and pollen morphology, pollen stainability, and nuclear DNA content of gulf vervain.

Gulf vervain plants were obtained from Grandiflora Nursery, Inc. (Gainesville, FL, USA) and originally came from the JC Raulston Arboretum (Raleigh, NC, USA). Five plants were placed in plastic containers (3.8 L) filled with Fafard 2P soil mix (Florida Potting Soil, Orlando, FL, USA). A controlled release fertilizer (Osmocote, 15N–3.9P–10K, 5- to 6-month release at 21 °C; The Scotts Company, Marysville, OH, USA) was applied to each container at a rate of 6.51 kg⋅m–3. The plants were grown in a temperature-controlled greenhouse (29.4 °C during the day and 21.1 °C at night) from Jul to Nov 2014.

The chromosome squashing protocol of Qian et al. (2021) was followed to produce countable chromosome spreads. Root tips were macerated in a 2.5% cellulase and 2.5% pectinase enzyme solution for 4 h in the dark and stained with 2.5% Giemsa solution for 10 min. A BX41 microscope with an Olympus Q-color 5 camera (Olympus America Inc., Melville, NY, USA) was used to photograph chromosomes at magnification ×1000. Chromosome measurements were taken from two metaphase cells using ImageJ 1.52s (Schneider et al. 2012).

Just before anthesis, flowers were opened and 12 anthers from three inflorescences were collected in microcentrifuge tubes. One hundred microliters of cotton-blue stain was added to the anthers and they were placed in a 65 °C water bath for 18 h. Anthers were then rinsed with water and squashed in 50 µL of 80% glycerol on a microscopic glass slide using a cover slip. A BX41 microscope with an Olympus Q-color 5 camera (Olympus America Inc.) was used to photograph pollen grains at magnification ×10 and ×40. Images at magnification ×10 were taken from six random fields of view over two prepared slides. All stainable and unstainable pollen grains were counted in each field of view to calculate pollen stainability. ImageJ 1.52s (Schneider et al. 2012) was used to measure the pollen diameter of 30 pollen grains at magnification ×40.

Gulf vervain plants exhibited an upright growth habit with a compact appearance (Fig. 1). The plants had an average height of 23.66 cm and a width of 38.65 cm. Leaves were lobed with a serrated edge and measured 9.32 cm in length and 6.90 cm in width. Shoot internodes had a mean length of 3.98 cm and a diameter of 5.79 mm. Inflorescences grew upward and measured 22.50 cm in length. Individual flowers had an average diameter of 9.1 mm. Flowers were light purple, with three to four open flowers per inflorescence at any given time from March to November.

Chromosome squashing of 35 metaphase cells confirmed a previous report of 42 chromosomes [Fig. 2 (Lewis and Oliver 1961)]. As a result of other verbena species having a polyploid series of chromosome numbers starting 2n = 14, as seen in V. officinalis (Sanders 2001), it is likely that gulf vervain is a hexaploid with a base chromosome number of 7 (2n = 6x = 42). Average chromosome lengths ranged from 2.96 μm to 1.25 μm. High SDs (up to 0.22 μm) in chromosome lengths per chromosome pairing indicate that this species may be an allohexaploid containing multiple subgenomes. In some mitotic cells, satellite DNA was identified on only two chromosomes, supporting an allohexaploid with three subgenomes. However, molecular analysis is needed to confirm this speculation. Nuclear DNA content analysis using both internal standards (‘Polanka’ soybean and ‘Naples Lilac’ porterweed) yielded the same nuclear DNA content for gulf vervain. The species recorded a nuclear DNA content of 2.95 pg/2C, similar to a close relative—Stachytarpheta cayennensis (2n = 4x = 112)—which has a nuclear DNA content of 2.81 pg/2C (Qian et al. 2021). This is the first report of nuclear DNA content for gulf vervain and may be of great value for characterization of wild accessions and preservation efforts.

Gulf vervain was a unique accession in several aspects. Being self-compatible, it produces seed without the aid of pollinators in a greenhouse, likely as a result of the placement of the style and anthers within the flower in addition to high pollen viability. Pollen stainability has been used in other Verbenaceae species, such as lantana and porterweed, as an indicator of pollen viability resulting from unsuccessful attempts to germinate pollen on agar media (Brewbaker and Kwack 1963; Czarnecki et al. 2014; Khaleel and Nalini 1972; Qian et al. 2021). Gulf vervain pollen grains are convex-triangular and abundant in production (Fig. 2). The grains were highly stainable, with 84% of grains becoming darkly stained. Pollen grain diameter was 37.18 ± 1.89 μm.

In summary, gulf vervain is an attractive native plant that provides important ecological services to gardens, landscapes, and natural areas of the southern United States. Our study on the species V. xutha has determined its pollen morphology with high stainability and uncovered its nuclear DNA composition. 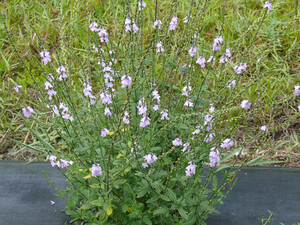