‘Pueblo’ Pecan: A Compact Cultivar for the Western and Central Growing Regions

Search for other papers by L.J. Grauke in
ASHS
Google Scholar
PubMedClose

‘Pueblo’ is a new pecan (Carya illinoinensis) cultivar released and patented by the U.S. Department of Agriculture, Agricultural Research Service (USDA ARS). This cultivar is the first to be released with a compact tree size, great precocity, early nut maturation, high yield potential, and scab resistance. ‘Pueblo’ should perform well in the West, central Texas, and as far north as southeastern Kansas. ‘Pueblo’ is the first of three patented pecan cultivars in the USDA ARS Pecan Breeding Program (U.S. Patent Application Serial No. 17/506,091). Parties interested in licensing ‘Pueblo’ should contact license@usda.gov with any questions. Graft wood will only be distributed to licensees.

The USDA ARS Pecan Breeding and Genetics Program conducts the only national pecan breeding program and releases control-crossed superior pecan cultivars to nurseries and growers (Grauke, 2019; Grauke et al., 2016; Thompson et al., 2008; Thompson and Grauke, 1991). Crosses are made in both Brownwood and Somerville in Texas. Seedlings are established on their own roots in a basic breeding program (BBP) orchard for the initial testing of growth, disease, flowering, nut yields, and nut quality. Promising seedlings are then advanced to the National Pecan Advanced Clone Testing System (NPACTS). In NPACTS, five to six grafted replicates of promising seedlings (≈25–30) are arranged in a randomized block with three to five commercial varieties serving as controls for comparisons across multiple years. The superior clones with unique traits are given Native American tribe names and released to nurseries and growers.

‘Pueblo’ is the first of three patented pecan cultivars by the USDA ARS (U.S. Patent Application Serial No. 17/506,091) (Grauke et al., 2021; Wang et al., 2022). The Pueblo are a group of Native American tribes in the Southwestern United States set apart from their indigenous neighbors by two main criteria: farming as their primary form of subsistence and residence in compact villages (Dozier, 1964). The compact tree shape of ‘Pueblo’ and recommendation for it to be grown in the West (among other areas) inspired the selection of its name.

The ‘Pueblo’ seedling was initially grown in Brownwood, TX, and showed greater precocity and early nut maturity than other varieties. ‘Apache’ rootstocks were planted in 1987 in the NPACTS orchard and grafted in 1992 and 1993 for further evaluation in Somerville, TX. A total of 35 scion trees (30 breeding lines and 5 standard cultivars as controls) were arranged using a randomized complete block design with six blocks in the NPACTS orchard. ‘Pueblo’ has performed well during our local tests and has also been evaluated in Hempstead, TX, Chetopa, KS, and Scottsburg, IN, under Material Transfer Agreements. Leaf morphology and tree configuration suggest adaptations to the West, but tests are needed before recommendations can be made for that area (Grauke, 2019).

‘Pueblo’ is a new pecan cultivar that is outstanding for its precocious, regular, and prolific production of good-quality nuts, allowing early harvest from a compact tree with a columnar canopy, similar to its female parent ‘Osage’ (Grauke, 2019). Its narrow canopy shape (Fig. 2A) may permit planting trees at an increased density without crowding. The time of spring budbreak for ‘Pueblo’ is generally late March in Somerville, TX, before the budbreak of any other standard cultivars used for our test and 1 week earlier than that of ‘Pawnee’ (Table 1). No damage has been observed from spring freezes, including a prolonged freeze in Texas in early Feb. 2021, with temperatures as low as 5 °F in College Station, TX. ‘Pueblo’ has been tested as far north as southeastern Kansas and performs well. ‘Pueblo’ has smaller, dark forest green leaves comparable to those of ‘Pawnee’ (Grauke, 2019). Leaflet orientation is similar to that of most pecan trees, wherein the opposite leaflet pairs are oriented ≈45 ° from the rachis (Fig. 2B). The mature tree begins leaf defoliation ≈1 week earlier than any other cultivars in the NPACTS orchard in Somerville, TX.

‘Pueblo’ is protandrous (type I), with early-season pollen shed and late-season pistillate receptivity (Table 1), slightly ahead of ‘Pawnee’. It usually bears one to four alternately positioned pistillate flowers per pedicel spike. ‘Pueblo’ has pistillate flowers with reflexed, red stigmas, similar to its pollen parent ‘Creek’ but in contrast to the green stigmas of its female parent ‘Osage’. Some flowers exhibited a more mottled coloration of patches of green and red. ‘Pueblo’ should be a good pollinizer for and should be well-pollinized by ‘Kanza’ and ‘Lakota’.

Within our fungicide-treated orchard (NPACTS) in Somerville, TX, ‘Pueblo’ exhibited similar leaf scab fungus susceptibility to the other cultivars in the test and displayed resistance to nut scab comparable to that of ‘Choctaw’, ‘Desirable’, and ‘Oconee’, but greater than that of ‘Pawnee’ (Table 2). In addition, its seed parent, ‘Osage’, and pollen parent, ‘Creek’, both have excellent scab resistance. However, ‘Pueblo’ is likely to require fungicide management in more humid environments.

‘Pueblo’ has been a consistent producer of good-quality nuts that mature early and are ready to harvest in mid-September in Central Texas at the same time as ‘Pawnee’ (Table 3). The seed parent ‘Osage’ bears many small nuts that ripen very early (≈1 week before ‘Pawnee’, whereas nuts from its pollen parent ‘Creek’ ripen in early to mid-September. ‘Pueblo’ bears nuts throughout the canopy but concentrates its crop in the core canopy of the tree (Fig. 2C), as opposed to most pecan varieties that only bear at the growing tips. ‘Pueblo’ has the highest percent of terminals with cluster (63.8%) compared with other standard cultivars in the test orchard based on the averages of the 7 years of observations (1995–2002) (Table 3).

‘Pueblo’ has a small to medium nut size (119 nuts per kg) compared with other cultivars in the test orchard (Table 4). The average nut weight is 8.3 g for ‘Pueblo’; however, it is 10.3 g for ‘Desirable’ and 9.4 for ‘Pawnee’. The average number of nuts per kilogram is 119 for ‘Pueblo’ compared with 98 for ‘Desirable’ and 108 for ‘Pawnee’. ‘Pueblo’ has a slightly longer nut than ‘Desirable’ and ‘Choctaw’, and it is slightly shorter than that of ‘Pawnee’ and ‘Oconee’. The nut percent kernel averages 55%, with a golden kernel color, which is slightly lower than that of ‘Pawnee’ and ‘Oconee’ but higher than that of ‘Choctaw’, ‘Desirable’, and ‘Houma’ (Fig. 2D, Table 4). Its seed parent, ‘Osage’, has 54% kernel (Thompson et al., 1991). Combined with its compact shape, the nut cluster and nut characteristics would allow greater yields with a hedged orchard management strategy like those commonly used in the western United States.

‘Pueblo’ averages 2.08 nuts per cluster at between 4 and 10 years of age, which is less than that of ‘Pawnee’, which has an average of 3.16 nuts per cluster (Table 3). Yield data indicate that ‘Pueblo’ has greater precocity than standard cultivars used as controls (‘Choctaw’, ‘Desirable’, ‘Houma’, and ‘Oconee’) and matured in the middle of September, similar to ‘Pawnee’ (Table 4). Both the seed parent ‘Osage’ and pollen parent ‘Creek’ are very precocious. The average yield of ‘Pueblo’ over the course of 9 years (1995–2005; no harvests in 2002 and 2004) is significantly higher than that of any control cultivars in the test (Table 5). ‘Pueblo’ has a mid to high alternate bearing character, similar to ‘Pawnee’ (Table 5). From the observations in the orchard, ‘Pueblo’ has a trend of increasing nuts per cluster and overbearing with age (older than 25 years). Considering its overbearing tendency, ‘Pueblo’ may be susceptible to overbearing with advanced age and require manual crop thinning.

The USDA Pecan Breeding and Genetics Program staff cannot discuss licensing terms with prospective licensees, but they can discuss the trees. The USDA does not have trees for distribution. Graftwood is currently being grown and will be distributed to licensees in January 2023. Parties interested in licensing ‘Pueblo’ can visit https://www.ars.usda.gov/ott/licenses-section-folder/licensing-process/ for more information about the licensing process or contact license@usda.gov with any questions. It is requested that appropriate recognition is given if this germplasm contributes to develo-ping a new variety. 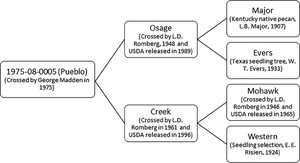 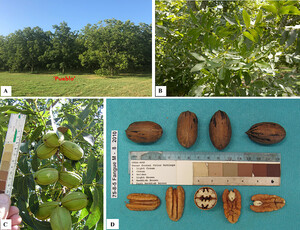