Search for other papers by Carol D. Robacker in
ASHS
Google Scholar
PubMedClose

Abelia R. Brown is an important genus of flowering landscape shrubs. Native to China, the genus is characterized by evergreen or semievergreen shrubs with a flowering period from spring to frost; white or pink flowers; and yellow-green, gold, red, or dark-green foliage, depending on the season (Dirr, 2011). Abelia is disease, pest, and deer resistant; heat and drought tolerant (Scheiber and Robacker, 2003); nontoxic to humans; attractive to a variety of pollinators (Mach, 2018); and a noninvasive species that rarely sets seeds naturally, make Abelia an important genus for the landscape and nursery industry (Dirr, 2011). In 2015, Abelia was reclassified into the Linnaeoideae subfamily (Caprifoliaceae s.l.) by Wang et al. (2015). Among the other members of the Linnaeoideae subfamily (Diabelia, Dipelta, Kolkwitzia, Linnaea, and Vesalea), only the monotypic genus Kolkwitzia Graebner has been used in the landscape with moderate success (Dirr, 2011). Kolkwitzia flowers on old wood. Flowers are pink with a yellow throat. The majority of Abelia cultivars are sports of Abelia ×grandiflora (Rovelli ex André) Rehder or have Abelia chinensis as a parent, with only a few cultivars derived from seedlings (Landrein et al., 2017). In an attempt to increase the diversity of abelia hybrids, we used Kolkwitzia amabilis as a parent.

A novel hybrid was developed at the University of Georgia Griffin campus between Kolkwitzia amabilis ‘Rosea’ (accession # 88-68*A, The Arnold Arboretum of Harvard University, Boston, MA) as a female parent and Abelia chinensis (two accessions, one from unknown origin and accession #2009-0626 from the Missouri Botanical Garden, St. Louis, MO) as a male parent. Both parents are diploid with 32 chromososmes (2x = 32). Crosses were performed in Apr. 2017 in a controlled greenhouse environment free of pollinating insects. Embryos were rescued 4 weeks after pollination following the protocol described by Scheiber and Robacker (2003). A total of 80 crosses were made, 69 fruits were formed, 49 embryos were rescued in vitro, and nine embryos germinated in vitro. Nine seedlings were transplanted into a six-cell pack insert tray (volume per pack 350 cm3; T.O. Plastics, Clearwater, MN) filled with Pro-Mix BK25 (55% sphagnum peatmoss, 25% pine bark, 20% perlite) (Premier Tech Horticulture, Quebec, Canada) and placed on a mist bench (4 s every 8 min) with 50% shade in a greenhouse at 24/18 °C (day/night) to harden off; only three plants survived the hardening off process. Of these three plants, two flowered, and one of the flowering plants demonstrated superior ornamental characteristics (Fig. 1) with leaves similar in shape to A. chinensis and flower color similar to K. amabilis but flowering on new wood as does A. chinensis. This plant has been trialed in a field plot with Lloyd clay loam soils in Griffin, GA, since 2018. This new intergeneric hybrid was named as × Kobelia amabilis L. Leyton Naranjo & C.D. Robacker.

Botanical characteristics were evaluated in a greenhouse at 24/18 °C (day/night) and with a 16-h photoperiod at the end of summer, and height of the hybrid was evaluated after 2 years of field trial. Twenty leaves, 15 internodes, and five flowers were randomly sampled in the hybrid and parent plants. Lamina length and width, internode length, corolla diameter and length, and sepal length were recorded, and data were analyzed by analysis of variance. Differences among genotypes were calculated by the Tukey-Kramer test (α = 0.05) in SAS 9.4 for windows (SAS Institute Inc., Cary, NC). Leaf, stem, and flower color were evaluated using the R.H.S Color Chart fifth edition (The Royal Horticultural Society, 2007). Also, pollen samples were collected from freshly dehiscent anthers of the hybrid and the parent plants. Pollen viability was assessed in 100 randomly selected pollen grains stained with acetocarmine and observed at 100x under an optical Leitz Fluovert Inverted Microscope (Leica, Germany). Pollen diameter was measured with the software AmScopeX/AmScope version 3.7.5849 (United Scope LLC, Irvine, CA).

The new hybrid, × Kobelia amabilis, has a height of 108 cm and width of 133 cm after 2 years growth in field conditions. Morphological characteristics are intermediate to those of the parents. Kolkwitzia amabilis ‘Rosea’ has opposite distichous broad-ovate leaves, and Abelia chinensis has opposite decussate ovate leaves. The hybrid presents opposite decussate phyllotaxy—similar to A. chinensis—but with slightly cordate leaves and very short internodes compared with the parents (Fig. 2, Table 1). Kolkwitzia amabilis ‘Rosea’ has the longest internodes (34.5 mm), followed by A. chinensis with 25.6 mm, in contrast to the 8.9 mm internodes in the hybrid. The hybrid also has narrower leaves (15.1 mm) than A. chinensis and K. amabilis ‘Rosea’ (21.9 and 35.4 mm, respectively) (Fig. 3).

Comparison of lamina length and width, internode length, sepal length and corolla diameter and length among the parents Abelia chinensis (♂), Kolkwitzia amabilis ‘Rosea’ (♀), and their hybrid × Kobelia amabilis. Measurements were made on greenhouse-grown plants at the end of summer.

Corolla length is similar among the parents and the hybrid (Table 1, Fig. 4). Kolkwitzia amabilis ‘Rosea’ exhibits the largest corolla diameter among the three species (19.2 mm) with a blush (Purple 76C, RHS) bilabiate trumpet-shaped corolla with inserted style and stamens. In contrast, the hybrid presents a somewhat infundibuliform purple (Purple 76B, RHS) reflexed corolla with exerted style and stamens (Table 2). Abelia chinensis also has an infundibuliform shape with exerted style and stamens, but flowers are white (White N155D, RHS). The flowering habit of the hybrid is also similar to A. chinensis, both flowering on new wood. Table 3 provides a detailed description of corolla, flower bud, leaf, and stem colors. The hybrid is sterile (Fig. 5, Table 4) with a pollen diameter of 46.5 µm, an intermediate size compared with the parents. This is the first report of a cross between the genera Kolkiwtiza and Abelia.

Flower morphology of the parents Abelia chinensis (♂), Kolkwitzia amabilis ‘Rosea’ (♀), and their hybrid × Kobelia amabilis. Measurements were made on greenhouse-grown plants at the end of summer.

Propagation studies are underway. Request for plant material can be addressed to Dr. Carol Robacker (croback@uga.edu).

Flower comparison among Kolkwitzia amabilis ‘Rosea’ (♀), Abelia chinensis (♂), and their hybrid × Kobelia amabilis in greenhouse-grown plants at the end of summer. Abelia chinensis (♂) and the hybrid × Kobelia amabilis display an infundibuliform corolla with exerted styles and stamens. In contrast, K. amabilis ‘Rosea’ (♀) displays a bilabiate corolla with a yellow throat and inserted style and stamens. Top pictures enlarged to show differences/similarities among species. Scale bars = 3 mm. 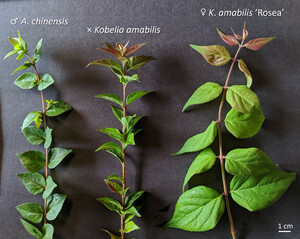 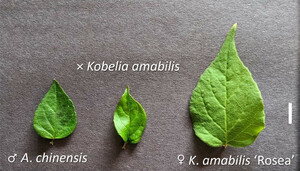 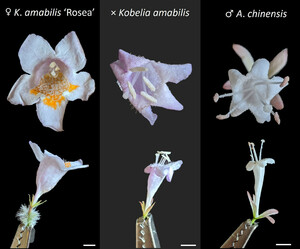