Acer (maple) species and their horticultural varieties are world-famous ornamental trees with colored leaves that are widely used in natural and potted landscaping, as well as gardening (Lin et al., 2015). Japan and the United States breed the most maple varieties, which are hybridized or selected from A. palmatum, A. saccharum, A. rubrum, A. japonicum, A. shirasawanum, A. buergerianum, and A. morifolium (Gao et al., 2015). In recent years, China has become more involved in the cultivation of maple varieties (Zhu et al., 2018). According to the National Forestry and Grassland Administration, nearly 50 new Acer cultivars have been certified in recent years. After more than 10 years of continuous work, more than 30 horticultural cultivars with specific fruit shapes, leaf colors, and branches from A. elegantulum, A. palmatum, and A. pubipalmatum have been bred at Ningbo City College of Vocational Technology, and 10 have been registered as new cultivars by the National Forestry and Grassland Administration. In particular, ‘Fendai’, ‘Simmeiwu’, and ‘Caizhe’ stand out with a bright, unique leaf color and have greater ornamental potential than the origin species of A. elegantulum.

Acer elegantulum is a deciduous tree distributed in East Asia (Xu et al., 2008). Trees are up to 15 m tall. Foliage is thick and papery, with short hairs on the middle vein. Mature leaves are 5 to 13 cm long and 7 to 16 cm wide, with a base that is truncate or broadly cordate. The leaf apex is acuminate and serrated. Leaves have 5 or 7 lobes located deep to one-half to three-fourths the leaf length, and the petiole is 2.8 to 6 cm long. Inflorescences are paniculate and terminal on a two-leaf branchlet (Lin et al., 2017). The formula is K5/C5A8 (Xu, 1998): five sepals that are ovate to oblong and ≈2 mm, five petals that are obovate and ≈2 mm, and eight stamen that are Samara glabrous and ≈6 × 5 mm with obtusely spreading wings. The ornamental value of A. elegantulum is not as high as A. palmatum, so this species is often used as the grafting stock of A. palmatum varieties, such as A. palmatum ‘Dissectum’, A. palmatum ‘Atropurpureum’, and A. palmatum ‘Aureum’. This is an effective way to improve the ornamental value and economic benefits of A. elegantulum.

In July 2015, in the nursery of Wangmingtang Village, Shengzhou City, Zhejiang Province, China, ≈50,000 A. elegantulum seedlings were planted. A branch on a young seedling (referred to as the mother tree) was found to have leaves with rose-red margins and green middles, and the wrinkled leaf shape was also inconsistent with other leaves. Only the variation branch was retained to promote its growth and for further observation. From July 2015 to Oct. 2016, it exhibited stable traits. The branches were selected from the mother tree and grafted onto A. elegantulum rootstocks. Six plants survived (referred to as first-generation plants), and the variation characteristics were observed from Apr. to Oct. 2017. The variation traits of the first-generation plants were consistent with those of the mother tree. In Oct. 2017, 22 grafted branches were selected from the first-generation plants and grafted onto rootstocks (referred to as second-generation plants). In May 2018, the leaf-color characteristics were observed to be consistent and stable with the mother tree. In Oct. 2018, branches from the mother tree, and first-generation and second-generation plants were grafted onto rootstocks; 35 small, grafted plants survived. After more than 4 years of observation, the cultivar has a high survival ratio, with strong resistance and special ornamental traits, which are consistent and stable with the mother tree. In July 2020, ‘Caizhe’ was registered as a new cultivar by the National Forestry and Grassland Administration.

Acer elegantulum ‘Simmeiwu’ is a densely branched, slow-growing, small tree. Buds sprout from early March under full-sun conditions in Ningbo. The leaf blades are papery and heart-shaped at the base, with five or seven palmate lobes. The central and lateral lobes are broad and irregular, and the apex is long and acuminate, with coarsely serrated edges (Fig. 2A). In spring, new leaves are rose-red (RHS 673C), whereas mature leaves are pink (RHS 275C), but both have green (RHS 5477C) patches or spots along the veins (Fig. 2A). Leaves begin to turn light pink (RHS 685C) with dark-green (RHS 5605C) patches or spots in late July or early August (Fig. 2C), and then gradually turn rose-purple (RHS 7595C), with pale-pink (RHS 670C) patches on the edge, by the end of October. Leaves of ‘Simmeiwu’ are smaller than wild species: 5.4 to 9.8 cm long and 6 to 11.4 cm wide. Flowers of this cultivar are similar to those of wild species.

Acer elegantulum ‘Caizhe’ is an evacuation-stratified, upright-growing, small tree that reaches a height of 3.6 m after 5 years of field growth under full-sun conditions in Ningbo. Buds sprout from early March. The foliage is thin and papery, usually three-lobed or rarely five-lobed, and the base nearly heart-shaped. Leaves are veined, usually irregular at the central and lateral lobes, with slightly wavy folds at the leaf margins. The leaf apex is long, acuminate, and slightly serrated. In spring, leaves are brownish green (RHS 7589C) with rose-red (RHS 183C) streaks on the edge (Fig. 3A). Summer leaves turn green (RHS 7494C) with ring-shaped pale-pink (RHS 7436C) margins. In late August, leaves begin to turn orange (RHS 1235C), and then fall in November. Leaves of ‘Caizhe’ are smaller than wild species: 6 to 9.5 cm in length and 6 to 10.5 cm in width. Flowers and fruit are similar to wild species.

Acer elegantulum ‘Fendai’, ‘Simmeiwu’, and ‘Caizhe’ are all suitable for growing in subtropical climatic regions. Seedlings should be grown in semishaded areas because they are adapted to warm, cool, and humid conditions. They can grow on neutral, acidic, and calcareous soil, but they grow best in deep, fertile, humid soil. They grow rapidly, have deep roots, withstand strong winds, and are highly resistant to pests and diseases.

Acer elegantulum ‘Fendai’, ‘Simmeiwu’, and ‘Caizhe’ are suitable for graft propagation, and their propagation methods are similar. Grafting should be conducted in autumn (from September to October) or spring (from March to April). One-year-old branches or plump buds are selected for grafting, and 1- or 2-year-old wild A. elegantulum seedlings are used as rootstocks. Using cleft grafting, the survival ratios of ‘Fendai’, ‘Simmeiwu’, and ‘Caizhe’ were 91%, 94%, and 92%, respectively.

Acer elegantulum ‘Fendai’, ‘Simmeiwu’, and ‘Caizhe’ were evaluated and registered as new cultivars by National Forestry Administration of China, and plant patents were approved in 2016, 2018, and 2020 (patent nos. 20160080, 20180351, and 20200162), respectively, in China. The propagation and production rights have not been assigned to any commercial company yet.

(A) A 6-year-old tree, (B) new leaves, and (C) fruit of Acer elegantulum ‘Fendai’ in full sun in the afternoon.

(A) Mature leaf, (B) new leaves, and (C) summer leaves of Acer elegantulum ‘Simmeiwu’ in full sun in the afternoon.

(A) Spring leaves, (B) summer leaves, and (C) autumn leaves of Acer elegantulum ‘Caizhe’ in full sun in the afternoon. 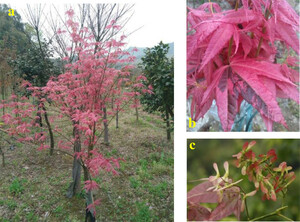 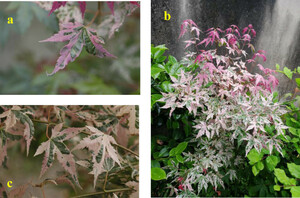