‘EmerDak’ is a new cultivar of Betula tianschanica Rupr. (Tianshan birch) that is a hardy, distinctive birch selection with a narrow pyramidal form and ornamental exfoliating white bark with gray and slight orange undertones. The original parent plant of ‘EmerDak’, growing at the North Dakota State University Dale E. Herman (NDSU DEH) Research Arboretum, is ≈10 m tall with a width of 2.5 m after 25 years. Based on species adaption, ‘EmerDak’ will be well adapted to U.S. Department of Agriculture (USDA) cold hardiness zones 3a to 7 and a wide range of soil types. This narrow pyramidal selection is suitable as a medium tree specimen in the landscape, with multiseason interest, as a result of high-quality summer foliage with reliable golden fall color, and ornamental exfoliating white bark.

Betula tianschanica is a deciduous woody tree in the birch family (Betulaceae) within the subgenus Betula (typical birches). Betula tianschanica was first described in 1869 by F. von den Osten-Saken and F.J. Reprecht in Sert., and is officially accepted by the International Plant Names Index (2020). There are 37 different heterotypic synonyms of B. tianschanica with the common name of Tianshan birch (Ashburner and McAllister, 2013). Other members of the subgenus Betula include B. pendula (European white birch), B. platyphylla (Asian white birch), B. populifolia (gray birch), and B. papyrifera (paper birch). Eaker et al. (2004) reported that Betula tianschanica is estimated to be a tetraploid (2n = 4x = 56) and has an approximate genome size of 2.2 pg. There was no mention of whether B. tianschanica is an autoploid or allopolyploid tetraploid. Ploidy levels were estimated using flow cytometry and not chromosome counting with comparing species, including B. tianschanica, to reported diploid birch species that had genomes sizes ranging from 1.1 to 1.2 pg (Eaker et al., 2004). Other close relatives to B. tianschanica in the subgenus Betula that are tetraploid include B. celtiberica (Iberian white birch) and B. pubescens (white birch). Betula papyrifera is typically hexaploid (2n = 6x = 84), but some populations can be tetraploid, pentaploid, or hexaploid (Eaker et al., 2004). Tianshan birch is native to Kazakhstan, Kirgizstan, Mongolia, Tadzhikistan, Uzbekistan, and Xinjiang, China (Roy et al., 2018). There are no reported cultivars of Tianshan birch other than ‘EmerDak’, and the conservation status of the species is considered to be data deficient, with a population trend that is decreasing as noted by the International Union for Conservation of Nature (Roy et al., 2018). Tianshan birch is not a common birch species found in the nursery trade and is not included in woody plant manuals (Dirr, 2009; Dirr and Warren, 2019).

The outer bark slightly exfoliates on the main trunk and structural branches, and peels in yellow-gray horizonal strips to reveal the white undersides, giving this selection more ornamental appeal, as well as multiseasonal interest during the active growing and dormant seasons. Leaves are alternately arranged, simple, and pubescent petiolate with doubly serrated margins. Summer foliage is a high-quality medium green with a golden yellow fall color. ‘EmerDak’ is monoecious, with flowers consisting of catkins with small nutlets as fruiting structures, with wind-dispersed seed. Flowers are not considered to be of ornamental value. Male catkins are typically found in single pendulous pairs terminally, up to 20 mm long and 4 mm wide, with pendulous female catkins ≈15 to 20 mm long and 5 to 8 mm wide. ‘EmerDak’ fruit ripen in late summer to early fall. There is no published information on seed fertility and germination with respect to the potential invasiveness tendencies. To date, the only Betula species that is listed as invasive is B. pendula (U.S. Department of Agriculture, Natural Resources Conservation Service, 2022). ‘EmerDak’ is a pyramidal selection with an estimated size of ≈10 m tall and a width of 3.5 m after 25 years.

‘EmerDak’ (Emerald Flare® Tianshan birch) was selected from a population of seedlings grown at the NDSU DEH Research Arboretum, Absaraka, ND (lat. 46.9859°N, long. 97.3549°W). The seedlings were obtained by Harrold Pellet (deceased) from the University of Minnesota Landscape Arboretum (Chanhassen, MN). Origins of the germplasm seed source are unknown. Betula tianschanica is a rare birch species in the United States and is not found in other U.S. arboreta or botanic gardens, including the University of Minnesota Landscape Arboretum, the Arnold Arboretum, the Morton Arboretum, or Longwood Gardens. This source of B. tianschanica has been evaluated since 1995 as NDSU trial selection TS95115-2. ‘EmerDak’ was selected in soils that are classified as an Antler-Wyard loam with a pH of 7.8. The color of various plant parts was determined under natural light using the Royal Horticulture Society (RHS) color chart (Royal Horticultural Society, 2015).

‘EmerDak’ is a unique seedling selection of Tianshan birch (Betula tianschanica) with a narrow pyramidal form and ornamental exfoliating white bark with gray and slight orange undertones (Fig. 1.). Selection TS95115-2 has darker green foliage during the summer months and a more narrow pyramidal form than the other sibling trees from the original seed source. This selection has been fully hardy in USDA hardiness zone 3a and survived recorded temperatures of –38 °C. ‘EmerDak’ has reached a height of ≈10 m with a 3.5-m canopy spread growing as a double leader. If trained in the nursery as a single leader, its size would be ≈10 m tall with a 2.5-m canopy spread, making it ideal for limited space or group planting within the landscape. Mature height may exceed this in other areas of the country; but, overall, it is a more pyramidal, formal birch selection. Leaves are alternate, simple, ovate to narrow ovate with an acuminate tip and an acute to truncate base, with a doubly serrated margin. Average mature leaf size is 6 cm wide and 7.5 cm long, with an average petiole length of 1.5 cm. Foliage is an excellent medium emerald green (adaxial, RHS 137A; abaxial, RHS 147B) throughout the summer, with no signs of chlorosis in a soil with pH exceeding 7.5 (Fig. 1). During summer drought conditions, ‘EmerDak’ exhibits no foliar stress symptoms such as leaf scorch or early leaf drop, which is seen on many other drought-susceptible birch species. Autumn coloration is an outstanding golden yellow (adaxial, RHS 163B; abaxial, RHS 161A) in late September to early October (USDA cold hardiness zone 3b) (Fig. 1). Flowers consist of male catkins and female strobiles that do not have significant ornamental value and are not considered messy within the landscape. The bark is slightly exfoliating, with darker gray (RHS 200D) peeling to white (RHS 156C), with faint pinkish white (RHS N155C) undertones (Fig. 2). Young branches are a reddish brown (RHS 200D) before exfoliating to the white bark and have an ornamental contrast with the dynamic exfoliating white bark of the main supporting trunk.

Resistance to Pests and Stress

Outstanding Characteristics and Use

‘EmerDak’ is an outstanding small to medium-size ornamental tree with pyramidal form. The attractive white exfoliating bark with gray and slight orange undertones adds significant multiseasonal interest to the landscape. ‘EmerDak’ has medium emerald-green foliage throughout the growing season. Recommended use is for limited-space landscapes for vertical accent elements or as a specimen tree. It is recommended that trees be mulched, and supplemental water supplied at stressful sites. Mulch will assist with winter protection in exposed locations or colder zones.

Propagation is by side-grafting or chip-budding onto B. tianschanica seedlings, softwood, or semihardwood cuttings or tissue culture (Hagemeyer and West, 2021). ‘EmerDak’ has performed well in an Antler-Wyard loam soil with a pH of 7.8. The upright pyramidal growth habit of ‘EmerDak’ resulted in no structural pruning being necessary for proper crown development. ‘EmerDak’ is a fast-growing tree, with an average annual growth of 20 cm after 25 years, which is not atypical for birch. ‘EmerDak’ was selected from a population growing at the NDSU DEH Research Arboretum and, to date, no seedlings have been identified growing outside of cultivated areas, although seed fertility has been shown to be relatively high (NDSU DEH Research Arboretum observations, data not reported). 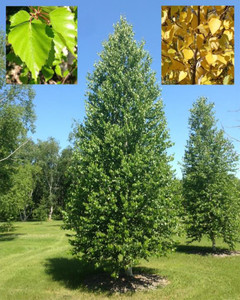 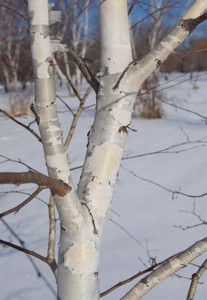