‘Utopia’ [Zantedeschia aethiopica (L.) K. Spreng] is a perennial calla developed by Chapingo Autonomous University, Mexico. The calla belongs to the Araceae family and is an ornamental native of Africa (Kuehny, 2000). In Mexico it is popular and is used for weddings and other celebrations. Most of the calla produced in Mexico are a perennial type with white spathes. In Latin America, this calla also grows in Argentina, Bolivia, Brazil, Colombia, Ecuador, and Guatemala. In some markets of Mexico, the perennial cultivar Green Goddess is found. It is characterized by green spots mixed with white in the spathe (Cruz-Castillo et al., 2008). Before the release of ‘Utopia’, another perennial calla named ‘Deja Vu’ was registered in Mexico. Its spathe is green, pink, and white (Cruz-Castillo and Torres-Lima, 2017). Most calla breeding has been carried out in the Netherlands, New Zealand, and the United States, and focuses on deciduous callas (Kuehny, 2000).

Once ‘Utopia’ had been identified, its characterization was carried out using the guidelines for the execution of the examination of the distinction, homogeneity, and stability of Zantedeschia sp. (International Union for the Protection of New Varieties of Plants, 2011).

A clone was originated by crossing ‘Deja Vu’ (father) with seedlings of ‘Pink Mist’ (mother). It is an F1 plant. ‘Deja Vu’ has breeder title no. 1478, granted by the National Seed Inspection and Certification System of Mexico.

In 2012, seeds from the crosses were sown. ‘Utopia’ was selected in 2018 and was propagated by rhizomes.

The spathe has different colors on the external faces: a pinkish purple on one face (Fig. 1) and white on the other (Fig. 2). The inner face is white with a throat that is slightly pink (Fig. 1). The ‘Utopia’ calla is a viable horticultural option for producers in the mountainous areas of Veracruz at altitudes between 900 and 2500 m. In the tropical highlands, it is recommended that one grows this calla under trees or artificial shade of 35% to 50%. The general optimum temperature for the development of ‘Utopia’ ranges between 16 and 24 °C. Temperatures that stress ‘Utopia’ are less than 10 °C and more than 28 °C. ‘Utopia’ was produced with rainwater; there are no studies on the effect of artificial irrigation. ‘Utopia’ grows in soils with adequate drainage, and the pH must be kept between 5.5 and 6.5. In the field, the rhizomes are planted at 70 × 70 cm or 60 × 50 cm (Cruz-Castillo et al., 2008). Larger rhizomes go into production faster. A small rhizome produces floral scapes after 1 year of being planted (Cruz Castillo et al., 2008). Harvest is carried out when the floral scapes are fully showing their final color, just before the total opening of the spathe in the shape of a trumpet. This is 1 or 2 d before the pollen sheds. There are no studies on the vase life of ‘Utopia’, but it has managed to last up to 17 d in good condition after being harvested. A potted ‘Utopia’ plant can produce three to six floral scapes per year.

‘Utopia’ can be used as a garden plant, cut flower, and potted plant. The floral scape length of ‘Utopia’ is about 90 cm, which is similar to the ‘Creole’ (white) calla perennial produced in Mexico and other countries in Latin America.

‘Utopia’ is registered in Mexico with the breeder’s title no. 2720 with the National Seed Inspection and Certification System. Plants of this cultivar can be requested through the General Direction of Research and Postgraduate Studies in the Chapingo Autonomous University, Mexico (dgip.cai@chapingo.mx).

Individual plant appearance. One external side of the ‘Utopia’ spathe is pinkish purple color (left). The inner face is white, with the throat slightly pink (right).

Floral scapes of ‘Utopia’. The external spathe has two different colors; one side is white and the other is pinkish purple. 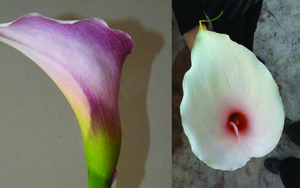 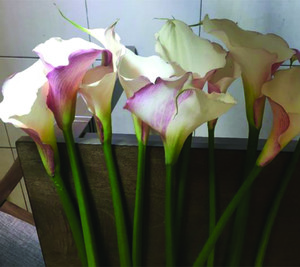