Rhododendron dauricum is an extremely cold hardy, semievergreen, multibranched shrub that is distributed widely throughout northeastern China, Mongolia, Japan, the Korean Peninsula, and Russia (Yang et al., 2020). It grows in a wide range of environmental conditions, from forests to rocky landscapes; produces flower buds during severe winters; and blooms in early spring even if it is covered in snow (Polezhaeva et al., 2018). It is a valuable ornamental landscape species in the Great Khingan Mountains of northeastern China, where the annual average temperature is –22.27 to 9.67 °C (Zhang et al., 2018). It is currently included in the List of National Secondary Key Protected Wild Plants in 2021. The flower color of R. dauricum is limited to pink or purplish red. There is a high demand, however, for new flower colors and improved cold hardiness, especially in northern locations (Wang et al., 2020). In 1839, R. dauricum var. album De Canfolle Prodr was reported for the first time for its white flowers (Wilson, 1923). Rhododendron dauricum var. album (Fig. 1B) communities have the same distribution along forest margins as its progenitor species Betula and Larix (Wilson, 1928). It is not widely used, perhaps because the number of the wild population is extremely rare. Only one to four plants with few branches and leaves, and poor growth have been found so far in a limited geographic area in northeast China. Recently, a new cultivar was bred selectively from this wild population and was named ‘Ao Xue’ (222879/SC038262). This new cultivar combines cold hardiness and ease of cultivation with white flowers and abundant, persistent leaves (Fig. 1A) that are superior to its wild female parent.

Many new Rhododendron varieties, including ‘Jinzhizhu’, ‘Ziyan’ (Zhang and Luo, 2002), ‘Erhaixiu’, and ‘Xihongzhu’ (Bai and Yang, 2017), and ‘Taihang Fuxing’ (Jiang et al., 2019), were derived from open-pollinated seeds or bud mutations. In 2015, open-pollinated seeds were collected from a wild, white-flowered R. dauricum var. album De Canfolle Prodr in the Hongxing Forestry Bureau in Yichun City, China. In October of the same year, these seeds were sown in the greenhouse at the Heilongjiang Forestry Institute in Harbin, China. In 2018, an excellent single plant was identified among the ≈40 seedlings that were raised, because of its unique leaf phenotype and corolla structure. It has many persistent leaves that stay green all year long. It has significantly larger corollas than its wild parent (Table 1). It was propagated asexually via cuttings in the courtyard of the Heilongjiang Forestry Institute. After 3 years of cultivation (2018–21), all the clones had stable and consistent morphological traits. In 2021, Rhododendron ‘Ao Xue’ (Chinese for “cold resistant”) was officially registered with the Royal Horticultural Society (RHS), which is the International Cultivar Registration Authority for Rhododendron. Its Reg charity no. is 222879/SC038262.

Comparison of the plant characteristics of ‘Ao Xue’ and the wild Rhododendron dauricum var. album grown in the field from 2019 to 2021 in Harbin, China.

‘Ao Xue’ and R. dauricum var. album were planted in randomly arranged pots with three replicates in a nursery at the Heilongjiang Forestry Institute. A total of 30 plants (10 plants per replicate) were selected randomly for data collection. The following morphological traits were recorded from 2019–21 during the flowering period: plant height and width, leaf length and width, petiole length, corolla diameter, flowering period duration, and leaf traits. Descriptions of all colors were based on the color chart guide published by the Royal Horticultural Society. The data were analyzed using SPSS 22.0 software (SPSS Inc., Chicago, IL) using Student’s t test.

The original ‘Ao Xue’ seedling first flowered in 2019, 1 year after cutting. Cuttings from the seedling were transplanted into the field after 1 to 2 years of growth in propagation facilities. It begins to flower from late April to early May and quickly reaches full bloom around mid-May. On average, flowering finishes in the last week of May. It can overwinter in and around Harbin, China, and its wide, funnel-shaped flowers occasionally bloom in the snow.

Its trusses are umbrella shaped and are comprised of one to five individual flowers. The individual corollas of ‘Ao Xue’ were, on average, 42.85 ± 0.57 mm in diameter, which were significantly larger than that of R. dauricum var. album (diameter, 34.51 ± 0.50 mm) (Table 1). Both have corollas with five lobes and wavy lobe margins (Fig. 1). The flower petals of ‘Ao Xue’ are white (RHS NN155D) and there are yellow-green blotches (RHS 153A) on the upper petals (Fig. 1C), whereas the petals of R. dauricum var. album do not have any noticeable blotches (Fig. 1 D). The style and filaments of both plants are white (RHS NN155D and RHS NN155A, respectively).

‘Ao Xue’ can be propagated vegetatively via cuttings. Softwood cuttings were collected in mid- to late-June and were cultured in plastic dishes in a small arch shed in Heilongjiang province. They were dipped for 5 s in 500 ppm 1-naphthaleneacetic acid (50% v/v ethanol), then grown in vermiculite media at 95% to 100% relative humidity. The plants rooted successfully within 40 to 60 d. When the root length exceeded 2 cm, the small arch shed was opened, and the seedlings were trained. Ventilation, cooling, and proper water control were used to train the seedlings. Before winter, the plants were watered thoroughly to establish the root systems. They stayed warm and moist even under the snow during a severe winter. Then, the cuttings entered a dormant state before initiating new growth in spring. The survival rate of the plants during the winter reached more than 80%. During the next spring season, the surviving plants were transplanted into plastic bowls (8 × 8 cm).

The majority of the subgen. Rhododendron plants that are reliably cold hardy have pink or purple flowers. In comparison with the currently available cultivars, ‘Ao Xue’ is unique in that it has exceptional cold hardiness, compact growth, high-quality foliage, and white flowers. ‘Ao Xue’ flowers and foliage are cold hardy in temperatures as low as –40 °C, but slight foliage injury is possible at this temperature in open, exposed locations. Its leaves stay green all year long in Harbin, China. ‘Ao Xue’ could be planted anywhere, from the colder regions in northeastern China to the warmer regions from Beijing to Shandong Province in China. In addition, it is easy to culture both at the commercial production and landscaping levels.

Information about plant material and research done on ‘Ao Xue’ can be obtained from Dr. Ling Wang (wanglinghlj@126.com) at the College of Landscape Architecture, Northeast Forestry University, Harbin, China. 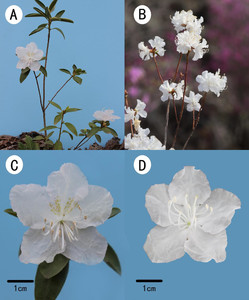