Description of ‘Lianjiu No. 1’, a New Cultivar of Sapium sebiferum

Search for other papers by Xingman Liu in
Google ScholarClose

Sapium sebiferum, a perennial deciduous tree in the family Euphorbiaceae, has been cultivated and used in China for more than 1000 years. S. sebiferum is strongly adaptable (exhibiting tolerance to drought, flooding, nutrient-poor soil, salt, and alkaline conditions) and widely distributed in various areas south of the Yellow River Basin (Huang et al., 2018; Institute of Botany and Chinese Academy of Sciences, 1980; Peng et al., 2008; Sui et al., 2021). Sapium trees are distributed in some areas of the United States with a similar latitude range to that of S. sebiferum, commonly known as Chinese tallow, including Texas, Louisiana, Florida, and Japan (Bruce et al., 1997; Simberloff and Rejmanek, 2011). S. sebiferum is a multipurpose tree that possesses energy, medicinal compounds, and timber and has high economic value. Because of its tall and tidy canopy and beautiful leaves that turn deep red, purple, or golden in autumn, S. sebiferum has high ornamental value and is widely used in gardens, urban green spaces, and coastal beaches in China (Jin et al., 2014; Li et al., 2020; Qin, 2011).

In nature, two S. sebiferum genotypes occur, the grape type and chicken claw type, with different ecological habits, extensive germplasm variation, and high offspring heterogeneity (Huang et al., 2011; Zhou and Li, 2014). Through mutation breeding at the Jiangsu Academy of Forestry and Zhejiang Academy of Forestry, the cultivars Qiuyan No. 1 and Ziyan have been developed, which have red leaves in autumn and were certified at the provincial level in 2013 and 2014, respectively. Similarly, Zhejiang Senhe Seed Industry Co., Ltd., has bred ‘Huangjinjia’ with yellow (RHS: 153B) (the RHS color chart is widely used as a standard in horticultural color evaluation; Royal Horticultural Society, 2007) leaves in autumn, ‘Hongfeicui’ with red (RHS: 46A) leaves in autumn, and ‘Haibinzijing’ with purple (RHS: 72A) leaves in autumn, which have also been awarded plant cultivar rights (Xu et al., 2021). In addition, four ornamental Sapium cultivars, Metro Candle, Green Hornet, Snow Mountain, and Fresh Summer, have been developed in Japan (Liu et al., 2020). Currently, there are more than 20 new cultivars of S. sebiferum, but its breeding efforts rarely focus on leaf shape or leaf size.

Lianjiu No. 1 is a new cultivar of Sapium sebiferum cultivated by Lianyungang Academy of Agricultural Sciences from seedlings. ‘Lianjiu No. 1’ grows rapidly, producing deep purplish red (RHS: 59B) shoots in the current year, and it has huge leaves, with deep purplish red (RHS: 59B) new leaves. ‘Lianjiu No. 1’ generally enters the leaf senescence period before middle of October at north latitude 30° to 35° of eastern China, when the leaf surface color changes from green to dark red (RHS: 59A). The leaves remain this color until leaf drop, with an ornamental period of ∼25 d. In Dec 2020, Lianjiu No. 1 obtained the national certificate of new plant cultivar protection and was certified by the Jiangsu Provincial Forestry Cultivar Validation Committee.

In Dec 2010, S. sebiferum seeds were collected from Shuyang, Suqian, and Huaian cities, and seedlings were planted at the Dongxin Experimental Base of Lianyungang Academy of Agricultural Sciences (Table 1). In 2011, through seedling selection, 112 plants with leaves falling after 30 Oct in the Lianyungang area were selected. Screening for specific and excellent ornamental traits found one seedling with significantly large leaves. Its leaves turned dark red (RHS: 59A) in autumn with deep purplish red (RHS: 59B) young shoots, showing a high ornamental value. From 2012 to 2015, successive observations were conducted to assess the phenotypic stability of this individual, which was named ‘Lianjiu No. 1’. From 2016 to 2018, three cleft grafting generations of ‘Lianjiu No. 1’ with S. sebiferum seedlings as rootstock were propagated, producing more than 500 individually grafted plants. After 3 consecutive years of phenological observation, all grafted plants showed similar leaf sizes with consistent red coloration. From 2014 to 2020, regional trials were conducted in Jurong City and Siyang City, Jiangsu Province, in which the new plant exhibited the same leaf characteristics. It’s worth noting that all the grafted seedlings grew vigorously and exhibited good adaptation to saline-alkali soil with a salinity of less than 0.5%.

‘Lianjiu No. 1’ is characterized by dark red large leaves in autumn. The leaf length, excluding the petiole, and width can reach 12.3 and 11.9 cm, respectively (Fig. 1A). Among existing cultivars, ‘Lianjiu No. 1’ most resembles ‘Pudazi’, which was discovered in Pujiang County, Zhejiang Province. ‘Pudazi’ is characterized by large leaves, which would turn purple (RHS: 183A) in late October. The biggest differences are that the leaves on average are bigger on ‘Lianjiu No.1’ than ‘Pudazi’, the petioles, young shoots, and leaves are all red which is not true of ‘Pudazi’ (Fig. 2, Table 2).

Comparison of leaves and branches of ‘Lianjiu No. 1’ and ‘Pudazi’ in Lianyungang city.

‘Lianjiu No. 1’ is a deciduous tree, with all glabrous parts, milky sap, gray-brown bark and diagonally spreading branches. Its emerging branches are deep purplish red (RHS: 59B) in color, while its 1-year-old branches are greyish green (Fig. 1B) with lenticels. ‘Lianjiu No. 1’ sprouts in early to mid-April. The diameter measured at 10 cm above the root system of annual grafted seedlings is 1.75 ± 0.42 cm (averages), and the annual plant height growth is 1.73 ± 0.13 m (averages). Within 8 years, the tree can grow to a height of 5 m and a width of 3 m.

The yellow flowers (RHS: 22A) are apetalous and occur in small, drooping bunches 5 to 20 cm long with racemose inflorescence between April and August. The fruit is a capsule, less than 2.5 cm in length. The fruiting period is between October and January. Clusters of greenish (RHS: 132B) three-lobed fruit turn black (RHS: 202A) when ripe.

The leaves are ∼8.4 to 12.3 cm in length, 8.0 to 11.9 cm in width, with apex acuminate or subacuminate and round leaf base (Fig. 1C). The upper surface of young leaves is deep purplish red (RHS: 59B), papery, entirely or mostly oval diamond and occasionally flat diamond in shape. The upper leaf surface is reticulate-veined and has levelled lateral veins. The leaves have a medium petiole length of 4 to 8 cm, with two glands at the tip of the petiole. In the Lianyungang area, the growth period of ‘Lianjiu No. 1’ is ∼220 d. The leaves turn from green to dark red (RHS: 59A) and keep the dark red (RHS: 59A) color before middle of October at north latitude 30° to 35° of eastern China (autumn color period) (Fig. 1C). The leaves fall after late November, for a viewing period of ∼1 month (Fig. 1D).

‘Lianjiu No. 1’ is highly stress-resistant and thus suitable for landscape application. It can grow well with the soil pH range 5 to 8.5 or with soil salt content of less than 0.5%. It can be propagated from late February to mid-March through the cleft grafting method using S. sebiferum as the rootstock and young shoots as the scion. Robust scions are retained for continuous growth, while the remaining sprouts are removed in May. ‘Lianjiu No. 1’ is tolerant to salt, nutrient-poor soil, drought, and flooding. However, when establishing a nursery or choosing a planting site, good drainage, supplemental watering during drought and areas with adequate fertility should be chosen, which is ideal for optimal growth. In lowlands with a high groundwater table, the ridge cultivation method should be adopted. The ridge height should be set to greater than 30 cm. ‘Lianjiu No. 1’ is highly pest resistant and requires little maintenance. For better ornamental performance, when planted into the landscape, spraying a 1% Bordeaux mixture (Tongzhou Zhengda Pesticide Chemical Co., Jiangsu, China) on the plant and surrounding soil is recommended to prevent stem rot. A 500-fold dilution of carbendazim wet table powder (Jiangsu Lanfeng Biology Chemical Industry Co., Ltd., Jiangsu, China) can be sprayed on the tree to prevent leaf blight.

Lianjiu No. 1 given the national certificate of new plant cultivars and certified by the Jiangsu Provincial Forestry Cultivar Validation Committee. It has unique characteristics such as large leaves, deep purplish red (RHS: 59B) new leaves, and deep purplish red (RHS: 59B) branches. Fall leaf color is dark red and lasts about a month, with leaf abscission occurring in late November to early December. The average growth rate of grafted seedlings is D = 1.75 ± 0.42 cm, H = 1.73 ± 0.13 m. It is adapted over a wide range of soil pH, from 5 to 8.5. It is a good choice for urban greening, land afforestation, and other landscape functions that have a wide-ranging pH from acidic to alkaline.

The new cultivar S. sebiferum Pudazi. Its leaves (A) and grafting seedlings in autumn (B). 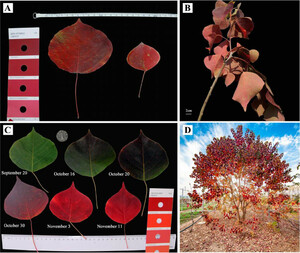 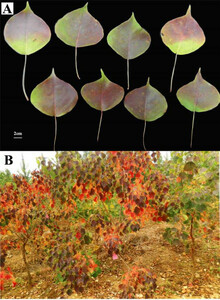 Search for other papers by Xingman Liu in
Google ScholarClose