‘Seneca’ Pecan: A Compact Cultivar for the Northern Growing Region

‘Seneca’ is a new pecan (Carya illinoinensis) cultivar released and patented by the U.S. Department of Agriculture–Agricultural Research Service (USDA-ARS). ‘Seneca’ is released because of its high nut quality, attractive cream-color kernels, early maturation, compact tree form, and scab disease (causal agent, Venturia effusa) resistance for both leaves and nuts. ‘Seneca’ has a determinate pattern of growth that shows a late budbreak in the spring and ceases growth early in the autumn, indicating possible freeze tolerance and adaption in northern regions. This cold hardy trait may be inherited from its two parents, which are from ‘Colby’ seedlings (Fig. 1). ‘Colby’ is a native seedling selection from the area around Niagara Falls in Illinois and is commonly used as a seedstock for much of the northern pecan industry. However, ‘Seneca’ has only been monitored in orchards with limited scab pressure in central Texas and has not been observed under all environmental conditions and cultural practices. Therefore, some of its characteristics may differ outside central Texas or with different management practices. ‘Seneca’ is one of the first three pecan cultivars patented by USDA-ARS (U.S. Patent Application Serial No. 17/667091) (Grauke et al. 2022; Wang et al. 2022b). Parties interested in licensing ‘Seneca’ should contact license@usda.gov with any questions. Graftwood will be distributed to licensees only.

The USDA-ARS Pecan Breeding and Genetics Program conducts a national pecan breeding program and releases control-crossed superior pecan cultivars for all pecan-growing regions (Grauke 2019; Grauke et al. 2016; Thompson and Grauke 1991; Thompson and Hunter 1985). Crosses are made in both Brownwood and College Station, TX. Seedling trees are established on their own roots in basic breeding program orchards for initial evaluation of growth, disease, flowering, and nut yields (> 7 years). Then, controlled-cross seedlings that show potential are identified and grafted into a new National Pecan Advanced Clone Testing System (NPACTS) orchard for further evaluation. Generally, an NPACTS orchard includes six blocks of trees containing five to six grafted clones of ∼30 breeding selections and three to five standard cultivars arranged in a completely randomized block design. After several years, the superior clones are given Native American tribal names and released to nurseries and growers. ‘Seneca’ is one of three patented USDA cultivars (Grauke et al. 2021; Wang et al. 2022a). Historically, the Seneca people lived south of Lake Ontario, and their tribal name can be translated as “People of the Great Hill” (Parker 1967; Preston and Voegelin 1949). This area is near where the parents of ‘Seneca’ were grown in a private orchard near Niagara Falls, Canada. ‘Seneca’ was named for this association and is expected to perform well across all growing regions, but its characteristics are especially suitable for the northern growing region.

‘Seneca’, tested as 1997-34-0017, is a progeny of a cross between two pecan varieties of northern origin, ‘NC-2B’ (seed parent) and ‘NC-4’ (pollen parent) made in 1997 in the USDA-ARS Pecan Breeding and Genetics Program in College Station, TX (Fig. 1). Both parents were part of 13 seedling selections made by Doug Campbell in his orchard in Niagara-on-the-Lake, Ontario, Canada, in 1985 and introduced to the USDA-ARS Pecan Breeding and Genetics Program in 1990. Nut morphology and genomic tests indicate ‘NC-4’ is a cross between ‘Colby’, an Illinois native pecan, and ‘Peruque’, a native pecan from Missouri. ‘NC-4’ is protandrous. ‘NC-2B’ is a cross between ‘Colby’ and an unknown pollen parent. ‘NC-2B’ has an indeterminate flowering pattern with overlapping pistillate and staminate receptivity. ‘Colby’ was a native seedling selection made by Wm. W. and J. W. Lawrence, Fayette County, IL, in the early 1940s and was selected by A. S. Colby and J. C. McDaniel and released in honor of A. S. Colby in 1957. ‘Colby’ is protogynous and has medium-size oblong nuts with golden kernels. ‘Peruque’ was a native seedling found by George Hunn in St. Charles, MO, in 1918, propagated in 1935 by R. Richterkessing, and introduced to the USDA-ARS Pecan Breeding and Genetics Program in 1953. ‘Peruque’ is protandrous and has small, ovate nuts with golden kernels. ‘Seneca’ was grown and evaluated in Brownwood, TX, and was selected for further testing because of its early nut maturation, cream kernel color, and compact tree form. ‘Seneca’ has been evaluated most extensively in orchards of the USDA-ARS NPACTS in Brownwood, TX, in a test with a completely randomized block design with six replicates of 49 breeding selections and three standard cultivars (Kanza, Pawnee, and Wichita) (Sparks 1992; Thompson et al. 1996; Thompson and Hunter 1985).

‘Seneca’ has a compact, sturdy tree form with an average height of 10.65 m at 15 years after grafting, with a slightly narrow canopy (height-to-width ratio, 1.10) (Fig. 2A). Mature tree trunks have a scaly texture and light-olive-gray bark (2.5Y 5/2, Munsell Plant Tissue Color Book 2012 Year Revision, 2018) (Fig. 2B). Its long, narrow dark-forest-green leaves are comparable in color to ‘Pawnee’ and are arranged in an odd pinnately compound opposite orientation. Leaflet orientation is similar to most pecan trees, wherein the opposite leaflet pairs are oriented about 45° from the rachis (Fig. 2C).

‘Seneca’ is monoecious, anemophilous, and has a protandrous or type I bloom pattern like its parents NC-4/NC-2B and popular cultivar Pawnee (Thompson and Hunter 1985). It has yellowish green staminate catkins (Fig. 2D) that have a mid- to late-season pollen shed, comparable to ‘Wichita’ (Sparks 1992) (Table 1). It should be a good pollinizer for ‘Pawnee’, ‘Waco’, ‘Western’, and ‘Wichita’, and be well pollinized by ‘Kanza’ and ‘Lakota’ (Thompson et al. 2008). ‘Seneca’ usually bears four to seven alternately positioned pistillate flowers per pedicel spike. Its pistillate flowers have reflexed, light-red stigmas sometimes containing patches of green (Fig. 2E). The stigmas have mid- to late-season receptivity, similar to ‘Pawnee’ in the test orchard in Brownwood, TX (Table 1). In 2021, spring budbreak for ‘Seneca’ was in early April in Brownwood, TX, around the same time as ‘Pawnee’ and ‘Kanza’, and about a week later than ‘Wichita’ (Table 1). No damage was observed from the prolonged freeze in early Feb 2021 in central Texas. 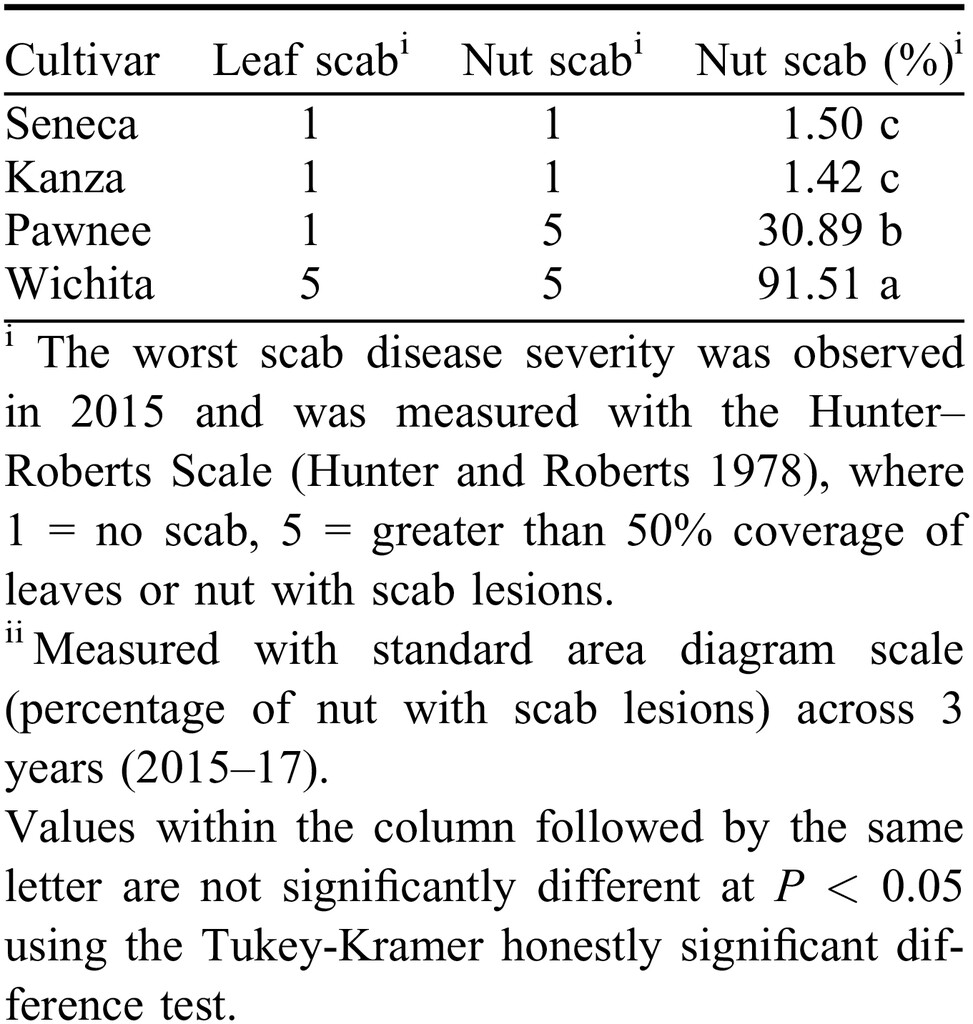 ‘Seneca’ produces high-quality nuts, even under limited irrigation, that mature early and are ready to harvest in late September in central Texas at the same time as ‘Pawnee’. On average, ‘Seneca’ nuts ripen on 23 Sep in Brownwood, TX (24 Sep for ‘Pawnee’ in the same orchard) (Table 3). Its nuts are elliptic in shape and round in cross-section. The average nut weight for ‘Seneca’ is 7.4 g, compared with 8.5 g for ‘Pawnee’, 6.6 g for ‘Kanza’, and 7.1 g for ‘Wichita’. The nut size of ‘Seneca’ is small to medium (138.7 nuts/kg), slightly larger than ‘Wichita’ (148.1 nuts/kg) and ‘Kanza’ (153.2 nuts/kg), but smaller than ‘Pawnee’ (120.5 nuts/kg) (Table 4). Its pollen parent, ‘NC-4’, produced an average of 140.8 nuts/kg, whereas its seed parent, ‘NC-2B’, produced an average of 145.6 nuts/kg in a USDA-ARS repository orchard in College Station, TX. ‘Seneca’ has nut dimensions with a height-to-width ratio of 1.80, comparable to ‘Kanza’ (Thompson et al. 1997). The kernels are attractive, typically cream in color, with dorsal grooves that are deep and wide (Fig. 3B). The pronounced ventral groove and basal cleft do not trap packing material. The ‘Seneca’ nut kernel percentage averages 57.38% compared with ‘Pawnee’, which has an average of 59.14% kernel with a golden color, and ‘Kanza’, which has a 52.83% kernel with golden kernels in Brownwood, TX (Table 4). The pollen parent, ‘NC-4’, has an average of 54.57% kernel with a dark golden color.

‘Seneca’ is patent pending. The USDA Pecan Breeding and Genetics Program staff cannot discuss licensing terms with prospective licensees but can discuss the trees. The USDA does not have trees for distribution. Graftwood is currently being grown and will be distributed to licensees in Jan 2023. Parties interested in licensing ‘Seneca’ can visit https://www.ars.usda.gov/ott/licenses-section-folder/licensing-process/ for more information on the licensing process or contact license@usda.gov with any questions. It is requested that appropriate recognition be made if this germplasm contributes to developing a new variety. 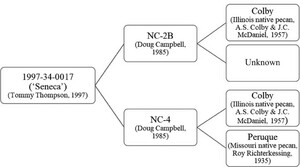 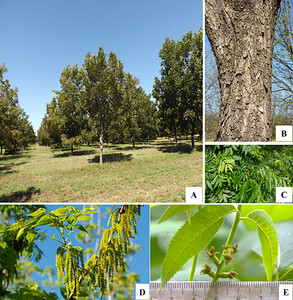