‘Arisoo’ is a red apple (Malus ×domestica Borkh.) that ripens in early September. It was selected from a hybrid population of a cross between ‘Yoko’ (Cummins, 1991) and ‘Senshu’ (Soejima et al., 1998) in 2010 at the Apple Research Institute, National Institute of Horticultural and Herbal Science, Rural Development Administration, Republic of Korea, and commercially registered in 2013. The ‘Arisoo’ apple is of relatively premium fruit quality in terms of taste, fruit shape, and high red blush peel, even under high summer temperatures. The incidence of flesh browning was negligible in ‘Arisoo’ during cold storage and shelf life; therefore, ‘Arisoo’ apple is a highly important variety not only for fresh consumption but also for processing into products, such as juice and fresh-cut fruit. Overall, ‘Arisoo’ apple is a promising cultivar owing to its numerous potential applications, as well as its higher peel blushness.

The apple cultivar Arisoo originated from a cross between ‘Yoko’ and ‘Senshu’ apple cultivars in 1994. The objective of the cross was to breed a midseason cultivar with red blush apple fruit of high quality (Fig. 1). The seedling, from which ‘Arisoo’ originated, was selected in 2010 and was registered in 2013 in the Republic of Korea. The selection was grafted onto Malling 9 (‘M.9’) clonal rootstocks of 7-year-old trees and then evaluated for four consecutive years in Gunwi in the southern region of the Republic of Korea (lat. 36°16′ N, long. 128°27′ E, altitude 71 m). In the experimental field, the soil characteristics at depth of 0 to 50 cm were clay loam, pH 6.5, and 2.21% of organic matter content. Irrigation was applied whenever the soil moisture tension was close to −30 − 40 kPa using an automatic irrigation system equipped with a tensiometer (Irrometer SR; Irrometer Company Inc., Riverside, CA). Data from the nearest meteorological station showed that the daily mean, maximum, and minimum air temperatures of the experimental area in the last decade were 26.2, 31.2, and 22.2 °C in August, and −1, 4.2, and −5.8°C in January, respectively. The average annual rainfall was 1200 mm. We investigated characteristics of this new cultivar, according to the standard protocol of the International Union for the Protection of New Varieties of Plants (UPOV, 1994).

The seed parent ‘Yoko’ was selected from an open pollinated seedling of ‘Golden Delicious’ by the Gunma Horticultural Experiment Station, Japan, in 1973 (Cummins, 1991). It has a fruit weight of 282 g, red skin color with a slight stripe and a tendency toward a russet tinge, white flesh color, high fruit storability, and ripens in early October. The pollen parent ‘Senshu’ originated from the cross between ‘Toko’ and ‘Fuji’ at the Akita Fruit Tree Experiment Station, Japan, in 1974 (Soejima et al., 1998). It has a fruit weight of 265 g; a bright, striped, red skin color; yellowish-white juicy flesh; and ripens from early- to mid-October. Characteristics of ‘Arisoo’ fruit are more similar to those of ‘Yoko’, including its white flesh, shape, and slight russet skin color.

‘Hongro’, which is harvested in early September (Shin et al., 1989), is similar to ‘Arisoo’ and has the largest midseason market sharing among Korean apple cultivars (Korea Rural Economic Institute, 2017). The demand for ‘Arisoo’ and its cultivation area are both increasing recently in Korea, due to its superior taste and fruit shape, compared with ‘Hongro’ (KREI, 2018).

Characteristics of trees, flowers, and leaves of apple cultivars Arisoo, Yoko, and Senshu grown in Gunwi, Republic of Korea. 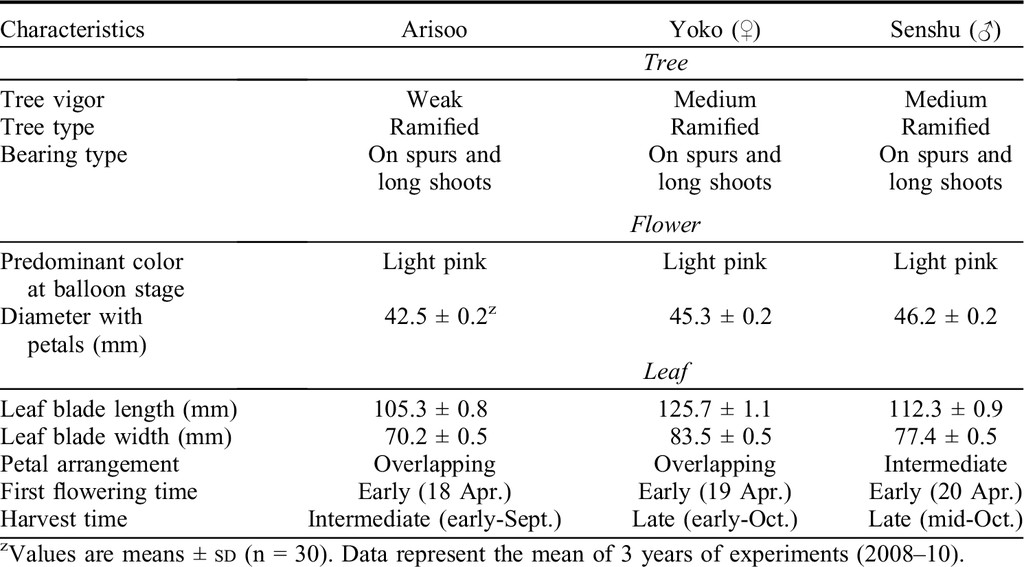 The ‘Arisoo’ fruit is large (260 g); has a medium height (67.7 mm) to diameter (79.1 mm) ratio (Table 2); globose shape; yellowish-green ground color; smooth, shiny, and medium thickness skin, with an average number of small lenticels; and 80% to 100% is covered with a red, flushed blush (Fig. 2). Russet incidence is also detected on the fruit peel. Ribbing and crowning at the calyx end of the fruit are absent. The flesh is white in color, crunchy, and firm. Soluble solids content (SSC) is 14.3% and titratable acidity (TA) is 0.35% (Table 2). ‘Arisoo’ fruit shows hardly any preharvest drop. The redness response of ‘Arisoo’ fruit, based on a* values, is higher than that of ‘Yoko’ and ‘Senshu’ (Table 3). ‘Arisoo’ fruit are more attractive on peel color than ‘Yoko’ and ‘Senshu’ based on these traits. 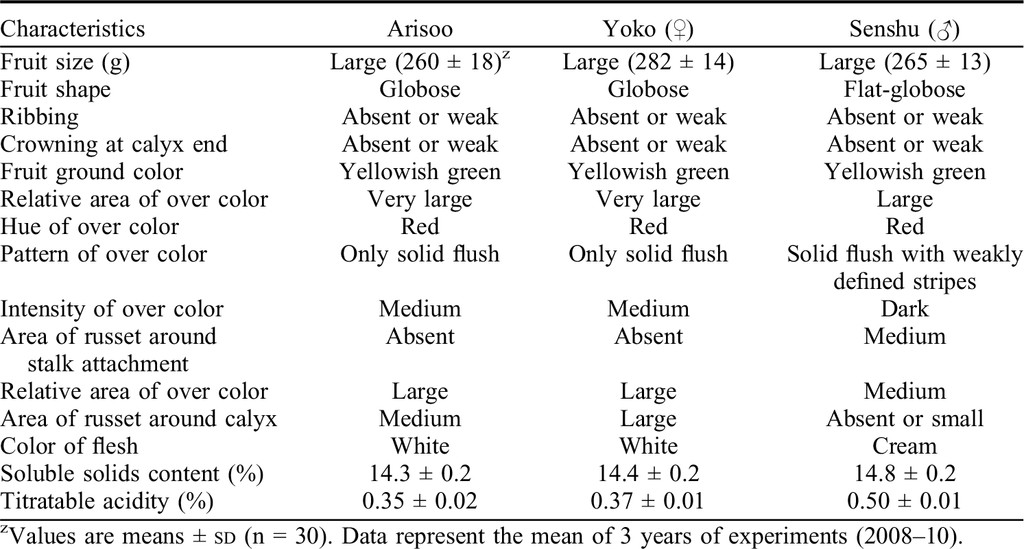 Fruit skin color variables (L*, a*, and b*) of apple cultivars Arisoo, Yoko, and Senshu grafted on M.9 rootstocks. 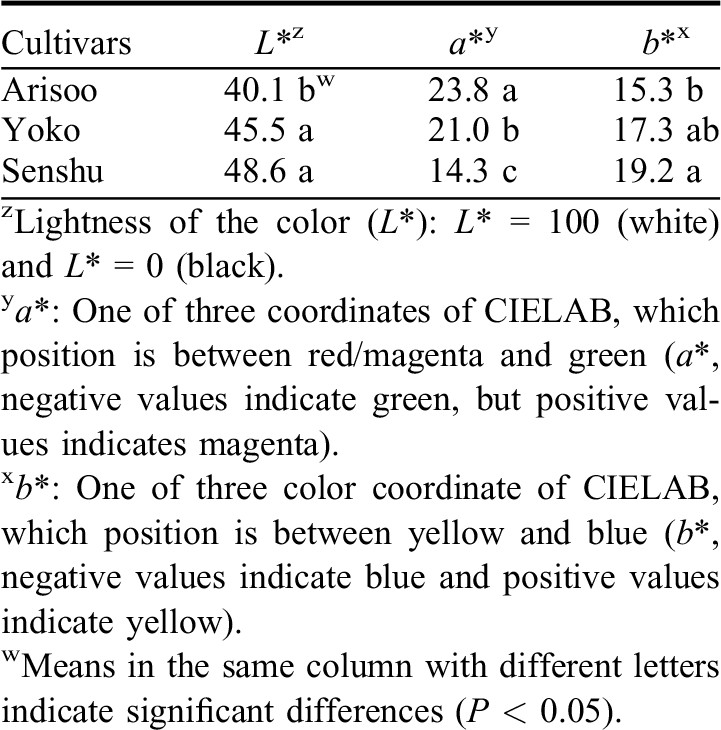 Responses of fruit quality attributes of ‘Arisoo’ apples harvested on 3 Sept. 2018 at Moonkyong Apple Research Institute and then stored at 0.5 °C for up to 5 months in air.

The incidence and severity of flesh browning were negligible in ‘Arisoo’. The change of lightness and color in ‘Arisoo’ showed lower than other cultivars (Fuji, Pink Lady, and Arkansas Black). ‘Arisoo’ is suitable for fresh cutting and requires minimal processing (Hong et al., 2018).

Plant variety protection of ‘Arisoo’ was obtained by Korean Seed Industry Law in 2013. It is available for commercial and research use with permission from the RDA. The breeder of this variety can be contacted via the RDA (e-mail: topapple@korea.kr).

Pedigree and timeline of breeding procedure used in the development of the apple cultivar Arisoo.

Tree, flower, and fruit of the apple cultivar Arisoo. 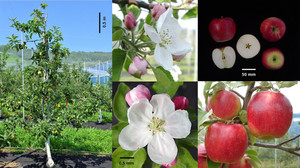