The continuous release of new nectarine [Prunus persica (L.) Batsch] cultivars by breeders from around the world, together with consistent improvements in orchard management strategies by growers, commercial interest in the production of fruit fresh consumption, and the introduction of new cultivars from Spanish scion nectarine breeding programs have positioned Spain as the preeminent worldwide nectarine exporter and currently the largest European producer [Ministry of Agriculture, Food and Environment (MAPAMA), 2021]. In Spain, the main nectarine-producing area is the Ebro Valley that accounts for more than 60% of the total Spanish peach and nectarine production (MAPAMA, 2021).

Among all type fruits (nectarine, peach, flat peach, and flat nectarine), nectarine is the most produced in the last 15 years in Spain. The most significant change in the Spanish nectarine industry in recent decades has been the development and introduction of precocious new cultivars which generally have a full red overcolor, good size, predominantly sweet taste, and slow-melting flesh. This change started two decades ago, with the introduction of the yellow-fleshed nectarine ‘Big Top’ (Zaiger Genetics Inc., Modesto, CA), which has been widely accepted by European retailers and consumers, offering significant advantages in harvest and postharvest management and fruit quality characteristics (Reig et al., 2017). ‘Big Top’ continues to be the midseason (July) reference nectarine cultivar in Europe for fresh consumption, with 95% of the cultivars that are currently planted belonging to this fruit typology. However, some of these new cultivars are not well-adapted to Spanish environmental conditions (Font i Forcada et al., 2014, 2019).

The Agro Séléctions Fruits (ASF)-Institute of Agrifood Research and Technology (IRTA) scion nectarine breeding program started in 2004 (Batlle et al., 2012) aiming to develop high-quality nectarine cultivars well-adapted to the typical edaphoclimatic conditions of Ebro Valley and other similar hot climates, covering full harvesting period from June to September (Cantín et al., 2017). Trees were selected that produce high-quality fruits at both harvest and after cold storage, with the ultimate objective of satisfying consumers. Therefore, as a result of the continued effort from the ASF-IRTA nectarine breeding program, the initial MAGNA and BLANQ series of yellow- and white-fleshed nectarine cultivars, respectively, have been recently released.

These five new nectarine cultivars will supply high-quality, firm, attractive, and sweet fruit over 12 weeks, from mid-June until mid-September, in the medium chilling zone of Ebro Valley and similar areas (moderate temperatures during winter, periods of fog during wintertime, summer temperatures of over 30 °C, and yearly accumulated annual rainfall of 300–400 mm).

Phenotypic and morphologic descriptors (tree, flower, leaf, and fruit traits) developed by the International Union for the Protection of New Varieties and Plants (UPOV, 2010) and the Community Plant Variety Office (CPVO, 2015) were used to describe the MAGNA and BLANQ nectarine series (Supplemental Table 1).

The MAGNA nectarine series (yellow-fleshed) generally have spreading growth habit, although ‘MAGNA 3701’ tends to have some upright branches. Under Gimenells climatic conditions, full bloom occurs during March, and harvesting between July and September. Both selections exhibit sparse density of flower buds (Table 1).

Comparison of several characteristics of the MAGNA and BLANQ nectarine series with the commercial standard ‘Big Top’ and ‘Garcica’ trialed at the Institute of Agrifood Research and Technology, Spain.

The BLANQ nectarine series (white-fleshed) have spreading growth habit, although ‘BLANQ 2601’ and ‘BLANQ 3001’ tend to have some upright branches. Under our climatic conditions, full bloom occurs during March, and harvesting between June and August. They all have showy flowers, with the exceptions of ‘BLANQ 2601’, which has campanulate flowers, and ‘BLANQ 3001’ and ‘BLANQ 3301’ present sparse density of flower buds (Table 1).

For both nectarine series, there is no need for thinning at full bloom, as fruit thinning will effectively optimize fruit size.

All five cultivars were originally selected as seedlings grown at selection plots and then grafted onto ‘Cadaman’ rootstock after selection, being the fifth most used rootstock in Ebro Valley’s (Reig et al., 2020). Three or four trees of each selection were placed at an experimental orchard of the Institute of Agrifood Research and Technology, Gimenells, Spain (lat. 41°39'18.77 N, long. 0°23'31.41 E; elevation, 230 m). Trees were trained to an open or Catalan vase system (Iglesias, 2019), spaced at 5 × 3 m. Each year, the trees received integrated pest management. The quantitative data presented summarizes the average values for 9 years collected on full-size trees.

The trees were harvested in two to three picks separated by 3 to 5 d. After harvesting, the whole production of each controlled tree was graded for fruit size and weight using a commercial electronic fruit grader (MAF RODA, Iberica, Spain). Total yield per tree, average fruit weight, and total number of fruits per fruit size were then calculated for each pick. Under our conditions, all five nectarine cultivars stood out for their high productivity and good fruit size, regardless of their harvest season (Table 1).

Fruits of five cultivars were examined at commercial maturity, using samples of 12 fruits per cultivar. All cultivars were generally found to be sweeter than current commercial cultivars within each harvest period, juicy, aromatic, and crunchy (Table 1, Supplemental Table 1). All of them are nearly 100% red skin colored, except for ‘MAGNA 3701’ (Supplemental Fig. 1), which could be considered a bi-color nectarine. The fruits are generally round shape without a mucron tip. The presence of skin lenticels is visible in ‘BLANQ 3301’ (Supplemental Fig. 1), weakly visible in ‘MAGNA 2901’, and low in the other cultivars. It should be noted that hot climates such as Ebro Valley's are conducive to the development of lenticels on fruit skin. In addition, this defect is related to wood aging. However, these two issues do not seem to affect ‘MAGNA 2901’ fruits.

Thirty fruits from the first harvest of each cultivar were kept at 0.5 °C for 30 d and then for 2 additional days at 20 °C. Each fruit was then scored based on a visual rating of chilling-injury symptoms (mealiness and internal browning). Each cultivar was then classified as having good, moderate, or poor long-term performance. The yellow- and white-fleshed nectarines ‘MAGNA 3701’ and ‘BLANQ 2601’, and ‘BLANQ 3301’, respectively, were the least susceptible to chilling injury after long periods of cold storage (Supplemental Table 1). 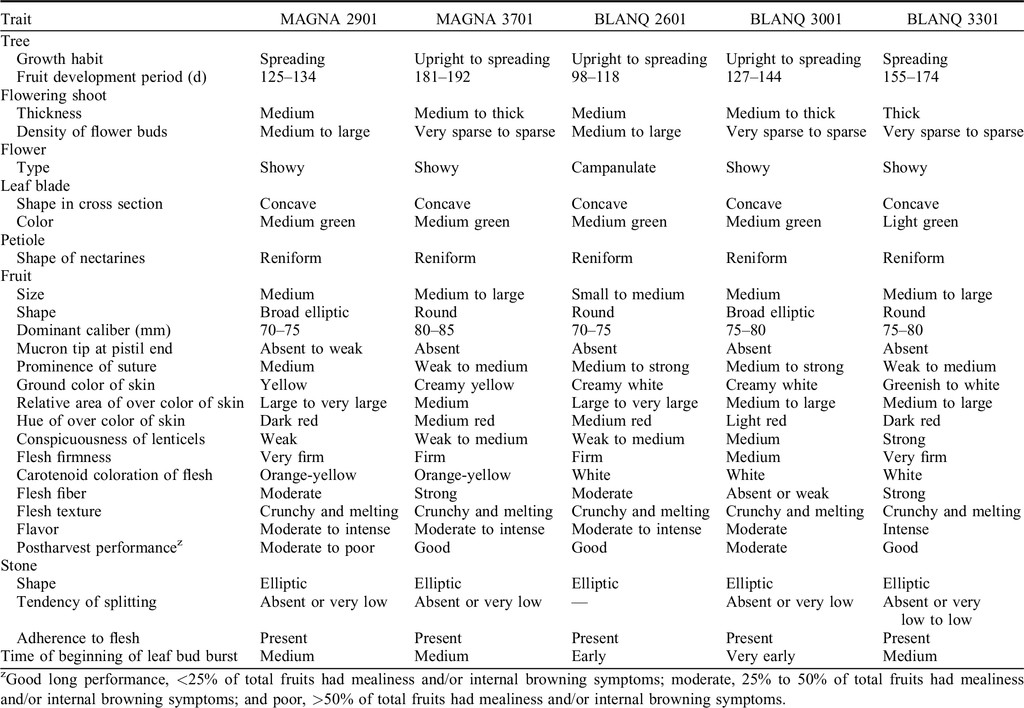