Black mulberry (Rubus spp.) produces aggregate fruit that are black with an acidic to sweet–acid9c flavor. It is considered a fast return crop, considering that it starts production during the second year of cultivation. Another interesting feature is the possibility of commercialization, because it is a fruit that contributes to a wide variety of products, such as yogurts, jellies, sweets and juices, in addition to being sold in natura and in the form of pulp. (Antunes et al., 2014).

The main objective in marketing blackberries is to develop fruit of greater mass with a large volume, which is consequently more attractive. In this regard, special attention has been given to yielding heavier fruit as the most important agronomic characteristic. Fruit yield is a complex quantity and a characteristic affected by several physical factors. Knowledge of the interrelationships between crop yields contributes to components that improve the efficiency of breeding programs through the use of appropriate selection (Belay, 2018).

Path coefficient analysis, or path analysis, has been widely used to understand production better and to determine the nature of the relationships between fruit and their constituent components, and to identify those with effects on mass to be used as selection criteria. Therefore, path analysis is a technique that can be used to understand how the physical variables of fruit affect mass. We report the results of a study that aimed to contribute to the selection of and to evaluate correlations between mass and other physical characteristics of blackberry fruit, indicating the direct and indirect effects of morphology and physical characteristics on blackberry fruit mass.

The mulberry fruit, of the Cherokee cultivar, were harvested on 18 Aug. 2020, resulting in a total cultivation cycle of 365 d. The fruit were harvested manually to avoid any type of influence or physical damage, following the recommendation of Santos et al. (1997), which establishes that the fruit must be homogeneous both in maturity and in quality, classifying them by size, shape, and color, and also should not be harvested when moist or supermature. After harvesting, 100 random fruit were selected, with the aim of excluding all those that presented defects, to avoid any type of undesirable influence that could hinder or interfere with the results of the research.

The physical attributes evaluated were the total mass of the blackberry fruit (MA) (measured in grams using a precision scale of 0.1 g) and fruit length (LE), the greater transverse diameter (GD), and the smaller transverse diameter (SD) (measured in millimeters using a 0.01-mm precision digital caliper). In Fig. 1, photographs illustrating the measurements are presented.

Fruit images were obtained with the aid of a support tripod for a camera, which was based on a platform where the fruit were supported. The photographs were transferred to AutoCAD 2018 (free version) to determine fruit area (expressed in square millimeters) and fruit perimeter (expressed in millimeters).

Fruit volume (VO) was calculated using Eq. [1], according to the methodology of Araujo et al. (2015), as and is expressed in cubic millimeters (Fig. 2).

According to the CN criterion presented by Montgomery et al. (2012), we obtained a Pearson correlation estimation matrix that indicated moderate to strong multicollinearity (CN = 675). Therefore, a crest trial analysis was performed to correct for multicollinearity.

Our results (Fig. 3) show the variables that had the greatest direct effect on MA. They included LE, PE, and VO, with correlation values of 0.1436, 0.2631, and 0.2914, respectively. Considering that a variable is viable for direct selection of larger and more attractive fruit, it is necessary that it has a direct effect and a high correlation in the same direction as the main variable. Thus, the variables LE, PE, and VO are the most suitable for direct selection, because they have a cause-and-effect relationship with MA. Nonthakod et al. (2019) also found a strong direct effect between MA and LE of blackberry fruit in their path analysis.

This result also indirectly suggests that the perimeter and volume are strongly influenced by the other physical attributes studied. In our study, these results were positive and demonstrate that greater values for LE, GD, and SD can be obtained through the indirect selection of those with the greatest fruit volume. Curi et al. (2015) highlighted that small fruit are more suitable for processing, such as in the manufacture of jams and sweets. Larger and more voluminous fruit are more suitable for commercialization in natura.

Via path analysis, it was possible to verify directly that, among the physical components of the study, increasing LE, PE, and VO reflected an increase in MA. Indirectly, greater values of LE, GD, and SD reflect an increase in the PE and VO of the blackberry fruit, thus contributing to larger, more attractive fruit. 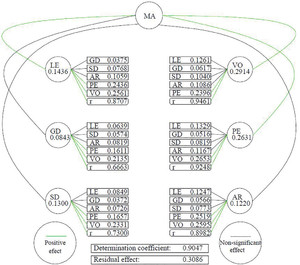