Cut flower anthurium has consistently ranked among the top five commodities for the Hawaii flower and nursery industry. Floral designers value cut anthurium for its long postharvest life and strong geometric lines. Although the most popular spathe color is red, the bicolor form of green with a major spathe color, also known as obake, is also desired. Growers expressed the need for pink obake cultivars with increased spathe production, because commercial pink obake cultivars such as ‘Tatsuta Pink Obake’ yield 4.9 flowers per plant per year (Kamemoto et al., 1986), in contrast to the minimum acceptable yield of six flowers per plant per year (Kamemoto and Kuehnle, 1996). Preference for pink spathes was secondary to reds in a market survey of anthurium buyers who purchased from Hawaii floral shippers (Halloran and Kuehnle, 1998).

UH1991 and UH2007 are floriferous cut anthurium hybrids with bicolored pink spathes with tinges of green, high yield, and long postharvest life. UH1991 was named ‘Kapoho Welo’ (Fig. 1) to commemorate the lava flow of 2018 that damaged the Kapoho area of Hawaii Island. With its spathe resembling a butterfly alighting on a flower, UH2007 was named ‘Honi-honi’ (Fig. 2); honi is the Hawaiian word for “kiss” (Pukui and Elbert, 1986).

Seedling 1265-85 was selected and designated as selection UH1991 (Fig. 3) in Mar. 1997. The parents are the commercial cultivars, red Tropic Fire bred by the University of Hawaii and the white Dutch cultivar Acropolis. Seedling 1393-9 was selected from the reciprocal cross between ‘Acropolis’ and ‘Tropic Fire’ in Dec. 2000 for its compact growth and bicolored pink spathe; thus it was designated as UH2007 and identified as a potential flowering potted plant (Fig. 4). These seedlings were selected based on their unique spathes shaped like a butterfly, unlike the more typical heart-shaped spathes of many commercially grown cultivars, and their obake coloration, inherited from ‘Kalapana’ and ‘Diamond Jubilee’. UH1991 was placed in tissue culture in Sept. 2003 to increase for testing with cooperators, and UH2007 was placed in tissue culture in July 2005. Both selections readily multiplied in culture. Microplantlets of UH1991 were distributed to cooperators in Nov. 2004 and Apr. 2005, whereas UH2007 microplantlets were distributed between July 2007 and Feb. 2008.

In Hawaii, anthurium can be grown in pots or in cinder beds, in shadehouses as well as greenhouses (Higaki et al., 1995). Plants of UH1991 and UH2007 were grown in 2-gallon pots in pine bark under 90% shade at the University of Hawaii Manoa greenhouse during the initial evaluation, whereas plants at cooperators’ farms on Hawaii Island were grown in black volcanic cinder beds under 70% to 85% shade.

Spathe and spadix color were determined under natural light using the Royal Horticulture Society Color Chart (Royal Horticultural Society, 2007; Table 1). UH1991 and UH2007 have medium-sized spathes that are wider relative to the spathe length (Table 1), unlike many commercially grown varieties with longer rather than wider spathes. Spathes were flexible and easy to pack, and were not prone to mechanical damage. In the field, spathe color faded or bleached in summer due to the higher light intensities and warmer temperatures. Spathes were held above the leaves, facilitating harvesting. Spadix length was acceptable (Table 1), and the angle relative to the spathe was less than 90 degrees, facilitating packing in boxes. Both selections have erect growth habit with flowers held above the leaves, facilitating harvesting. UH1991 has glossy dark green heart-shaped ovate leaves, and UH2007 has green triangular ovate leaves.

A total of 200 plants each of UH1991 and UH2007 were field tested on four cooperator commercial farms in East Hawaii. Cooperators reported that the thick and semiglossy foliage did not exhibit damage from volcanic emissions containing sulfur dioxide and other gases, referred to as vog. Anthracnose or spadix rot, a fungal disease caused by Colletotrichum gloeosporioides (Aragaki et al., 1968) was observed occasionally, mainly during the winter months. Bacterial blight is a major disease of anthurium caused by Xanthomonas axonopodis pv. dieffenbachiae (Alvarez et al., 2006). UH1991 and UH2007 were vigorous growers in the field and exhibited tolerance to the bacterial blight, with UH2007 more tolerant than UH1991. Both UH1991 and UH2007 are susceptible to anthurium decline caused by the burrowing nematode, Radopholus similis (Sipes et al., 2001), but are responsive to post-planting treatments to control nematodes.

Postharvest performance of UH 1991 was evaluated from June 2007 to Oct. 2009, and UH2007 vase life was evaluated from Sept. 2012 to Feb. 2015. Flowers were harvested and kept overnight in deionized water. After holding in deionized water, half of the harvested stems were sprayed with 100 ppm benzyl adenine (BA), and the remaining half were left unsprayed before packing in boxes to simulate shipping conditions. Flowers were unpacked after 3 d, and lower stems were trimmed by 1.2 to 2.5 cm and held in deionized water at 22 °C. Data were taken and the water was changed every other day (Monday, Wednesday, and Friday). Determination of vase life was assessed based on rating scales for spadix drying, spathe browning, and gloss (Paull, 1982).

UH2007 control flowers lasted for 31.1 d, with spadix discoloration (4.3) as the primary reason for discarding, although the spathes exhibited slight browning (2.2) and negligible loss of gloss (1.9). A total of 166 control flowers were evaluated. BA-treated spathes lasted for 32.3 d. Spadix drying (4.5) was the main reason for discarding. Spathe browning (1.8) and loss of gloss (1.7) were not as important for discarding. A total of 143 BA-treated flowers were tested. Student’s t test value (P = 0.8848) indicated that the postharvest life of BA-treated UH2007 spathes did not significantly differ from the control. BA-treated spathes occasionally turned greenish as they aged.

Cooperators tested market acceptability with floral designers and received positive feedback regarding its design utility. Although originally selected for potted plant production, stem lengths of UH2007 (Table 1) are acceptable for the market. In 2019, ‘Kapoho Welo’ was exhibited at the Society of American Florists cut flower competition and was awarded the Blue Ribbon (Vincent, 2019). Judges commended ‘Kapoho Welo’ for its form and its marketability, as it matched the Pantone color of the year for 2019.

‘Kapoho Welo’ and ‘Honi-honi’ were released in 2019 to the Hawaii Floriculture and Nursery Association. 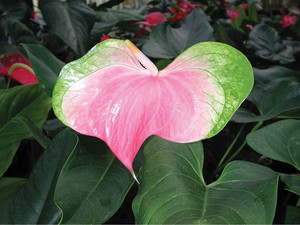 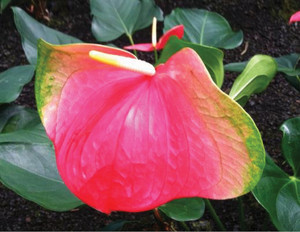 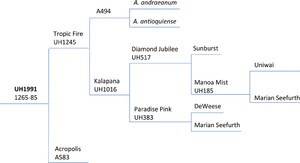 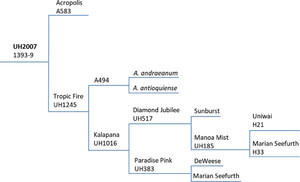