The genus Pavonia is one of the most abundant genera (more than 200 species) in the Malvaceae, and most of the species are native to North and South America (Fryxell, 1999). Although numerous species exist, only a few have been used as ornamental plants, such as P. hastata in Australia (Mitchell, 1982) and P. lasiopetala in Texas (Nokes, 1986). Pavonia lasiopetala is a small shrub native to Texas and northern Mexico, inhabiting dry, rocky landscapes (Fig. 1A). Pavonia missionum is a perennial shrub native to South America in Brazil, Argentina, and Paraguay (Fryxell, 1999) (Fig. 1B). Pavonia lasiopetala is native to central Texas; thus, plants can survive in U.S. Department of Agriculture (USDA) hardiness zone 7b (U.S. Department of Agriculture–Agricultural Research Service, 2012). Pavonia missionum has been observed to reseed and come back every year (John Ruter, personal observation) at Tifton, GA [USDA hardiness zone 8b (U.S. Department of Agriculture–Agricultural Research Service, 2012)].

Pavonia missionum belongs in subgen. Pavonia, sect. Pavonia, subsect. Hastifoliae, whereas P. lasiopetala is in subgen. Pavonia, sect. Pavonia, subsect. Exsertae (Fryxell, 1999). The base chromosome number for the genus Pavonia is n = 7. Pavonia missionum is an octoploid (2n = 8x = 56), whereas the chromosome number for P. lasiopetala is unknown (Fryxell, 1999). Both species prefer full sun to partial shade. The leaf bases are usually cordate with dentate margins for P. lasiopetala and cordate with crenate to serrate margins for P. missionum, and the apexes are acute for both species. The leaf blades are ovate to ovate-triangular with occasionally three to five lobes (no lobe for P. lasiopetala) (Fryxell, 1999). The leaf of P. lasiopetala is moderate to heavily stellate pubescent (Fig. 2A and B). The adaxial leaf surface of P. missionum is heavily glandular-pubescent with appressed hairs, and the lower side of the leaf is sparsely pubescent with stellate and simple hairs (Fig. 2C and D). Both species have solitary flowers with staminal columns and five petals. Pavonia lasiopetala has five pink petals that slightly overlap, whereas P. missionum has five separate orange-red petals. The two species can be used as ornamental plants as a result of their heat and drought tolerance, and their attraction of pollinators (Quinn and Klym, 2009). A new interspecific hybrid with reduced fertility, which carries the two species’ desired ornamental traits, would be ideal for developing new cultivars. Thus, the interspecific hybrid P. ×rufula was developed by crossing P. lasiopetala (♀) and P. missionum (♂). Pavonia ×rufula is an attractive perennial shrub with red or red-purple flowers and reduced fertility.

In Fall 2017, controlled crosses were made at the University of Georgia (UGA) Trial Garden in Athens, GA. In Spring 2018, 83 seeds from 60 initial crosses were treated with 15 min of acid scarification and were sown at the UGA Durham Horticulture Farm in 1020 trays (54 × 27 × 6 cm) (Landmark Plastic, Akron, OH) in Watkinsville, GA. In Summer 2018, 26 germinated plants were transplanted to 2.8-L pots at the UGA Durham Horticulture Farm. Only six of these seedlings showed novel traits, whereas the remaining seedlings appeared identical to the maternal parent. The six hybrid seedlings are intermediate morphologically to both parents. Five plants showed red [Royal Horticultural Society (RHS) 46B] flower color and one showed red-purple (RHS 57C) flower color (Royal Horticultural Society, 2001).

Terminal cuttings were collected on 5 Sept. 2018 for propagation, treated with indole-3-butyric acid potassium salt (Sigma-Aldrich Co., St. Louis, MO) at 3000 ppm for a 5-s quick dip at the Durham Horticulture Research Farm. Cuttings were placed in 8.8 × 8.8-cm plastic pots (Kord; The HC Companies, Inc., Twinsburg, OH) with a substrate of Pro PRO-MIX BX MYCORRHIZAE Pro (PRO-MIX, Quakertown, PA) and Aero-soil perlite (Dicalite, Bala Cynwyd, PA) (1:1, v:v). Mist was applied (8 s every 5 min from 7:00 am to 7:00 pm) for 2 weeks. Rooting was 100% for all cuttings attempted. The six crosses were overwintered at the Durham Horticulture Research Farm in an overwinter house (set temperature, 7 °C) in 2018–19 and were planted to the field on 2 May 2019 for further evaluation. Plants were spaced 1.22 m apart in a row, 1.83 m between rows, with drip irrigation (emitters 30.5 cm apart) applied twice a week. Fertilizer (10N–4.4P–8.3K; Athens Seed Company, Watkinsville, GA) was incorporated into the soil at a rate of 84 kg nitrogen/ha before planting.

The description of the new interspecific hybrid species is as follows: Pavonia ×rufula Yue and Ruter [P. lasiopetala (♀) Scheele × P. missionum (♂) Eckman] is an interspecific hybrid with intermediate or different morphological characteristics compared with the parents. The new hybrid’s plant height is taller than either parent, the leaf area per leaf is less, the epicalyx lobes are intermediate to both parents, and the leaf shape and marginal serrations are similar to the paternal parent. The parent species’ petal color is pink and orange-red, respectively, with the hybrid’s petals being red to red-purple. The hybrid exhibits limited fertility.

The plants are small perennial shrubs with unique axillary red or red-purple flowers and five petals. The mericarps are reticulate-rugose, the adaxial leaf surfaces have simple trichomes on the lamina and stellate trichomes on prominent veins, and the abaxial surfaces have glandular and nonglandular simple trichomes. The leaf blades are usually 4 to 6 cm long and are slightly longer than wide, with an acute apex. The leaves have a cordate leaf base, dentate to crenate margins, and an overall cordate leaf shape. The leaf’s upper surface is moderately stellate pubescent, and the lower surface is minutely stellate pubescent (Fig. 3). Petioles are green (RHS 144B) and mainly 2 to 3 cm long and 0.6 to 1.2 mm in diameter, with shorter simple hairs with glandular and nonglandular pubescence. Flowers are solitary and asymmetric, and are located in the leaf axis with 1- to 2.5-cm-long pedicels and five lanceolate involucellar bracts (7–9 × 2–2.5 mm). Pavonia ×rufula has five separate red petals with a staminal column in the center. Flowers measure 35 to 45 mm in diameter, with 10 pistils and about 23 to 36 stamens. Styles are ≈1.75 cm long and 0.1 to 0.2 cm in width, with a light red color (RHS 49A) at the base, whereas the stigmas are a deeper red (RHS 46A). Styles exceed the column, and stigmas are usually villous. Stamens are white (RHS 155B), with yellow (RHS 16A) pollen in the anther. Pedicels are green (RHS 144C) and measure 1.5 to 4 cm in length, with simple and stellate pubescence. There are five sepals at the bottom of each flower ≈1.3 cm in length. The sepals are lanceolate in shape, hirsute with simple and stellate pubescence, and light green (RHS 44D) with deeper green veins. There are also five lanceolate epicalyces split into one-seeded mericarps. The mericarps of P. ×rufula are very similar to P. missionum, except the number of mericarps per fruit is reduced. Pavonia ×rufula is larger compared with both parents (Table 1). The leaf area of P. ×rufula is smaller than both parents, and the leaf shape is more like P. missionum (Table 1, Fig. 4). The other traits, such as style length, calyx lobe length, epicalyx lobe length, and mericarp shape, are similar to one parent or intermediate between two parents (Table 1). Pavonia ×rufula is a perennial shrub with a woody base that prefers full sun to partial shade and blooms during the long days of summer in Athens, GA (USDA hardiness zone 8a; Fig. 1C and D) (U.S. Department of Agriculture–Agricultural Research Service, 2012).

Although P. ×rufula is larger at maturity than either parent, the flower diameter shows no difference from the parents (Table 1, Fig. 5). The fertility of P. ×rufula is reduced compared with both parents (Fig. 5). Previous research studies with other plants in the Malvaceae (Hibiscus sect. Furcaria) indicated that many interspecific hybrids were sterile or nearly so (Menzel et al., 1983). Partial or complete sterility is common in interspecific hybrids and is often caused by imperfect pairing of the chromosomes at meiosis (Fehr, 1991). Observations in 2018 of 100 flowers showed no seed was formed for all six P. ×rufula seedling selections, and all the flowers aborted a few days after pollination (Fig. 6). In 2019, P. ×rufula plants at the UGA Durham Horticulture Farm produced a few seeds. If the seed was produced, only one viable seed was found in an individual fruit. Seeds were collected and sown in the UGA Horticulture Farm greenhouse for further evaluation. The resulting plants were uniform in appearance and had a phenotype like the hybrid parent.

The holoploid (2C) genome size for plants in this study were P. lasiopetala (5.55 ± 0.09 pg), P. missionum (4.00 ± 0.09 pg), and P. ×rufula (4.76 ± 0.03 pg). The intermediate genome size of the proposed new species provides further evidence for the hybrid nature of P. ×rufula and suggests interploid hybridization. Although two hexadecaploid (2n = 16x = 112) species are known in the genus Pavonia, there is no known intermediate ploidy series between 8x and 16x (Fryxell, 1999). Because there are no chromosome counts for P. lasiopetala or the entire subgen. Pavonia, sect. Pavonia, subsect. Exsertae, further research and chromosome count data may show P. lasiopetala and P. ×rufula to have ploidy levels greater than 2n = 8x. Because no data for genome size exist for Pavonia in the Plant DNA C-values Database (2021), the values presented represent the first published holoploid (2C) genome sizes for this genus.

Information about the research and use of P. ×rufula can be obtained from Dr. John Ruter (e-mail: ruter@uga.edu) from the College of Agricultural and Environmental Sciences, Department of Horticulture, University of Georgia, Athens, GA. 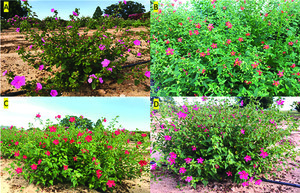 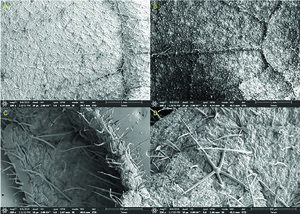