Crabapples are ornamental apples that belong to genus Malus of the Rosaceae family (International Union for the Protection of New Varieties of Plants, 2003). They are shrubs or small trees that produce fruit with a diameter ≤5.1 cm (2 inches), and are important ornamental trees in temperate zones because of their excellent floral displays (flower type, diameter, shape, and color), colorful fruit (shades of lime green, amber, gold, yellow, orange, red, and purple), wide range of growth habits (drought resistance, cold resistance, saline alkali tolerance, barren resistance), and potential for attracting wildlife (Dirr, 2010).

After more than 300 years of hybridization and cultivar introduction in the United States, Europe, and Asia, there are ≈1200 crabapple varieties, with about 100 commonly supplied in today’s global market. Unfortunately, double-petal varieties of flowering crabapples are relatively scarce (Fiala, 1994). In the past 20 years, only two new double-flower crabapple cultivars—Spring Bride and Jarmin—have been released into the U.S. market (Fan et al., 2019).

In traditional Chinese culture, double-petal flowers represent elegance, beauty, and generosity. The Chinese double-flowering crabapple Malus spectabilis ‘Plena’ has been incorporated into landscapes since the mid-1700s (Romer, 2002). There are rich crabapple germplasm resources in China, and more attention has been paid to breeding varieties of crabapple in recent years. New varieties have been introduced continuously (Zhou et al., 2019), and the ornamental characteristics of the leaves, fruit, flowers, and colors have gradually diversified (Li, 2012; Li et al., 2008; Zhang et al., 2020).

Natural hybridization is significant for species evolution as heteropolyploid progeny are competitive and adaptable (Krystyna et al., 1997; Prentis et al., 2008). Malus ‘Xiang He’ was selected by natural hybridization and released from the Shandong Provincial Academy of Forestry’s crabapple program, which started in 1999. The cultivar has significant ornamental features in the form of double, red–purple flowers with a diameter of 5.5 to 6.5 cm (blooms between mid-April and early May), and small red fruit with a long bearing period (until early March of the following year). The cultivar also displays strong adaptability and resistance to diseases and pests in Shandong Province, China.

From Sept. 2008 to July 2012, three generations of this individual were propagated by bud-grafting with M. hupehensis ‘Pingyitiancha’ as rootstock. Successive observations were conducted to assess the phenotypic stability of 600 progeny seedlings. The same generation produced the same type of blossom and fruit, and the ornamental characteristics were stable between generations. In addition, a strong adaptability to low temperature in early spring (Table 1), and resistance to diseases and pests, were also observed. The cultivar was named ‘Xiang He’ after an on-the-spot expert examination in Apr. 2017.

Performance of Malus ‘Xiang He’ under various test sites and climate conditions.

The distinguishing ornamental features of ‘Xiang He’ are the double-petal red–purple flowers with a large diameter in spring, and the small red fruit in autumn and winter. The ornamental characteristics of ‘Xiang He’ are very similar to those of Malus ‘Chang Hui’ (Hu et al., 2018), which is a new cultivar selected by our research team. These two cultivars display the same tree habit, flower type and shape, and petal shape (Figs. 1 and 2), but the color of the middle zone of the inner side of the petal differs. The color of this part of the ‘Chang Hui’ petal belongs to the red–purple group 64C, and that of ‘Xiang He’ belongs to the red–purple group 62C of the the Royal Horticultural Society (RHS) color charts (Royal Horticultural Society, 2007) (Table 2). In addition, the two cultivars have distinctive fruit shape and fruit persistence. The fruit shape of ‘Chang Hui’ is ellipsoid and fruit persistence is short; those of ‘Xiang He’ are flat obloid and very long (Table 2). The specific characteristics of ‘Xiang He’ are as follows.

Comparison of phenotypic attributes of Malus ‘Chang Hui’ and Malus ‘Xiang He’.

The tree has medium vigor, upright form, red–brown branches, and reaches a height of 4.5 m. It reaches a crown width of 2 m in 5 years (Fig. 1A).

The flowering time (10% open flowers) of ‘Xiang He’ begins ≈20 Apr. in Shandong Province, China (lat. 36.83°N, long. 119.46°E). The unopened flower color (balloon stage) is dark pink, and the number of flowers is moderate (Fig. 1A). ‘Xiang He’ has an umbellate inflorescence with five flowers, which are double petaled and shallow-cup shaped. There are 10 to 17 petals and 25 to 40 stamens per flower (Table 2). The diameter with the petals pressed into horizontal position is large (5.5–6.5 cm; Fig. 1C). The petals are elliptic and overlapping, and have prominent veins. On the inner side of petals, the color of the marginal zone is red–purple (RHS 67C; Table 3) and the color of the middle and basal zones is red–purple (RHS 62C; Table 3). The color of the outer side is red–purple (RHS 67C; Table 3).

Phenotypic characteristics of Malus ‘Xiang He’.

The color of the leaf blade is reddish green, and lobes are absent. The blade is 5.8 to 10.2 cm in length, 2.9 to 4.1 cm in width from the fourth to the sixth fully expanded leaf, and the ratio of length to width is medium (Table 3). The petiole is long and the leaf margin is serrate. The leaves are medium glossy and green on the upper side, with moderate anthocyanin coloration (Table 3). The main color of the leaves is orange in late autumn.

‘Xiang He’ is propagated by bud-grafting in autumn (from early August to late October) in Shandong Province, China. M. hupehensis ‘Pingyitiancha’ plants were chosen as the rootstock. The rootstock plants were 1 to 2 years old, strong, and disease free, with a ground diameter of 1 to 2 cm. The grafting process involved cutting the rootstock, cutting and embedding the bud with xylem, and binding. Each step was completed continuously and quickly. The buds were from the most robust sprouts of the year and were selected from the mother tree in the scion garden. The grafting height was 10 to 20 cm above the ground. In the spring of the next year, the buds below the graft union were removed just after sprouting, and the upper rootstock was cut at ≈2 cm above the graft union when the new buds were 3 to 5 cm. The rootstocks were irrigated before grafting to improve the rate of success.

Compared with ‘Chang Hui’, ‘Xiang He’ has a relatively stronger resistance to pests and diseases. Only apple rust and spider mites are occasionally found on the leaves, and little damage can be done to seedling growth. Five Baume Degrees lime sulfur (commonly used ingredient ratio is quicklime:sulfur:water = 1:2:10) at 30 times can prevent apple rust effectively by spraying the surface of the whole plant in early spring. Spider mites can be effectively prevented by spraying the surface of leaves with diflovidazin 36% suspension (Qingdao star brand Crop Science Co., Ltd, located in Qianduobu village, Jiangshan Town, Laixi City, Shandong Province) at 5000 times. Other pests and diseases have not been found. 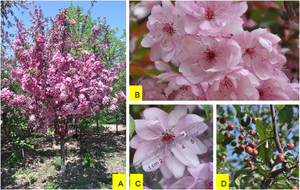 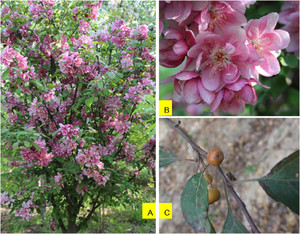