Two new clonal oregano cultivars Origanum vulgare cv. Pierre and cv. Eli have been developed through multiyear and multisite evaluations, and have been approved by Rutgers University for commercial and public release. Each of these new cultivars have significantly greater essential oil and 2-methyl-5-propan-2-ylphenol (carvacrol) yields than the currently offered commercial alternatives. These two new cultivars were developed to provide good field performance, upright growth habit, to accumulate high essential oils yields and serve as rich sources of carvacrol. The cultivars were designed to supplement the flavor, food, fragrance, nutraceutical, cosmetic and animal and poultry industries. These two new oregano cultivars are rich in antioxidants and other compounds that were previously shown to exhibit in vitro anti-inflammatory activity (Shen et al., 2010).

The Rutgers Oregano Breeding Project originally began in 2002 with the procurement of commercially available oregano seed from a variety of commercial suppliers and the U.S. Department of Agriculture Germplasm Bank. An initial prescreen subjected oregano seedlings to strong environmental pressures of high winds, intense heat, and drought in 2003, when ≈7000 oregano plants that were originally sourced from various U.S. Department of Agriculture accessions (AMES 1682, AMES 1684, AMES 1685, PL 326546, PL 440579, and PL 440580) and commercial seeds were first grown in a controlled greenhouse at Rutgers, in a randomized manner (one plant per pot). The oregano plants were allowed to grow, and some earlier flowering lines were cut back so that the plants from all the accessions and seed sources were forced to flower at the same time, allowing cross pollination to occur. The seeds were collected when mature. The collected mixed seeds were then grown and transplanted into a single field in Coolidge, AZ, with sprinkler irrigation. The resulting new oregano plants varied widely in maturity and phenotype, and most died as a result of heat and high winds. The remaining plants were evaluated, and the most promising plants—based on field performance (e.g., growth, vigor, absence of stress symptoms in the field) under the high-stress conditions—were selected for further evaluation.

Then, 450 of the most promising plants that met the preselected desirable phenotypic characteristics were removed manually from the soil (with roots) and shipped from Arizona to Rutgers University, New Brunswick, NJ, where they were all grown in the research greenhouse. Vegetative clones were made from each of the 450 selected plants and were later evaluated under greenhouse conditions, where 142 single plant selections (SPSs) that continued to exhibit the desired phenotypic characteristics (including height and dry weight) were maintained. From the 142 SPSs, each were harvested at the time of initial flowering and then dried at 37 °C. Each of the dried SPS samples (leaves and flower tops) were then hydrodistilled, and the essential oil yield was calculated based on dry weight (Reichert et al., 2016). The results showed 72 plants accumulated the highest amounts of essential oil. The essential oil composition was then analyzed using gas chromatography/mass spectrometry (Reichert et al., 2016).

Chemical profiling of the essential oils identified three lines of interest—coded as OS10, OS14, and OS37—which showed significantly greater amounts of carvacrol in 3 subsequent years (2010, 2011, and 2012) and in 2016. In 2016, the field trial also included the three selected clonal Rutgers’ lines as well as three cloned commercial lines for their comparative performance because commercially established clonal oregano lines were not available at the time of the experiment. All the lines were evaluated in randomized complete block design field trials at the Clifford E. and Melda C. Snyder Research Farm in Pittstown, NJ (lat. 40.557762N, long. 74.960574W) to ensure minimal environmental influence on the variation in the production of essential oil and carvacrol yields. The three commercial lines that were used included Greek oregano from the Territorial Seed Company (lot no. HR1265/P), Cottage Grove, OR; another Greek oregano from the Park Seed Company (lot no. SD14120003), Hodges, SC; and an Italian oregano from Franchi Sementi (lot no. 285/XV), Lawrence, KS (presented as OST, OSP, and OSI, respectively). Each oregano line was evaluated for morphological characteristics, biomass, essential oil yield, and carvacrol concentration (Table 1).

The goal of the Rutgers’ oregano selection and crop improvement project was to select and develop a uniform O. vulgare plant with good field performance in the Mid-Atlantic region that grows upright and is thus suitable for mechanical harvest. The desired plant needs to accumulate high amounts of essential oil and carvacrol, as well as rosmarinic, oleanic, and ursolic acids for applications in the food, nutraceutical, and cosmetic industries (Shen et al., 2010).

The OS10 plants, now named for release as ‘Pierre’, were uniform in their production of biomass, essential oil, and carvacrol. They had opposite, short stalked, ovate leaves with acute tips and entire edges that were light to moderate yellow green (142B, 143D, and 144D) according to the Royal Horticultural Society color fan (Table 1, Fig. 1) (Azalea Society of America, 2018). This variety did not flower the entire growing season; instead, it grew laterally on the plastic mulch rather than producing vertical flowers. These plants can be harvested 14 weeks after planting, at which time (under the 2016 environmental conditions), the plants were 15.8 cm tall, 69.2 cm wide, and their leaf length and width were 1.9 and 1.6 cm, respectively. ‘Pierre’ produced 127.1 g dry weight/plant and 2.0 g essential oil/plant. The carvacrol concentration was 68.50% (Table 1, Fig. 2) of total essential oil, and the plant yielded 1.3 g carvacrol/plant. ‘Pierre’ had 2.5 mg/g gallic acid equivalents in its plant tissue, or 327.9 mg/plant.

The OS37 plants now, named for release as ‘Eli’, were also uniform in their production of biomass, essential oil, and carvacrol. They had opposite, short stalked, ovate leaves with acute tips and entire edges that were light to moderate blue green (130C, 133D, and 135D) according to the Royal Horticultural Society color fan (Table 1, Fig. 3) (Azalea Society of America, 2018). This line flowered toward the end of the growing season and grew laterally on the plastic mulch. These plants were harvested 14 weeks after planting, at which time ‘Eli’ plants were 18.1 cm tall, 56.5 cm wide, and their leaf length and width were 1.9 and 1.4 cm, respectively. ‘Eli’ yielded 94.1 g dry weight/plant and 1.62 g essential oil/plant. The carvacrol concentration was 72.77% (Table 2, Fig. 4) of essential oil, and the plant yielded 1.1. g carvacrol/plant. ‘Eli’ has 2.4 mg/g gallic acid equivalents in its plant tissue, or 232.4 mg/plant.

The chemical profiling of the oregano essential oil via gas chromatography/mass spectrometry revealed many differences in the essential oil composition between the Greek and the Italian oregano lines. The Greek oregano lines were shown to have most of their essential oil profile dominated by carvacrol production at ≈70% of the essential oil, whereas the Italian oregano line produced much lower concentrations. The Italian oregano plants were richer in other aromatic volatiles, such as thujene, germacrene, spathulenol, and caryophyllene oxide, whereas these compounds were not present in the Greek oregano plants (Table 2). The results of the Folin–Ciocalteu assay showed that both ‘Pierre’ and ‘Eli’ had medicinally relevant concentrations of phenols within the leaves of the plant. The total phenolic content for the O. vulgare lines in this field study was much greater than those reported previously and were within the range of other commonly consumed foods and reported Lamiaceae species (Wojdyło et al., 2007; Wu et al., 2004). Other reports of optimizing extraction conditions may lead to a better recovery (Barros et al., 2010). These phenols contribute to the antioxidant and anti-inflammatory activity commonly reported within oregano (Shen et al., 2010). ‘Pierre’ and ‘Eli’ will provide a grower with an O. vulgare cultivar that produces the traditional aroma and provides an increase in the total phenols produced compared with other O. vulgare commercial alternatives.

The commercial oregano plants exhibited substantial variation in their biomass production, carvacrol concentration, and carvacrol yields, making the uniform production of products from these lines a more challenging goal to meet. ‘Pierre’ oregano can provide growers with a more reliable route to obtain uniform oregano biomass and essential oil yields with richer amounts of carvacrol. Our results show that ‘Pierre’ had significantly greater yields and lower sds of these characteristics when compared with other evaluated commercial lines. ‘Eli’ produces a large amount of carvacrol as well, and produces white flowers. Future efforts should focus on propagating the material from selfed seed to eliminate the costs associated with producing transplants (Reichert et al., 2016). Yet, because of the well-recognized difficulty in creating oregano lines to be true to seed, our approach was to develop and release clonally propagated plants based on our SPSs. When the properties of oregano essential oil, carvacrol, and their medicinally bioactive polyphenols are sought, ‘Pierre’ and ‘Eli’ are demonstrated, excellent sources for such products, and are aesthetically attractive, edible oregano plants for landscapes and home gardens.

Propagules of these two cultivars developed by the New Jersey Agricultural Experiment Station are available upon reasonable request from the corresponding author. Herbarium voucher specimens of each new cultivar have been deposited in the Chrysler Herbarium at Rutgers University, New Brunswick, NJ.

Representative chromatogram of the essential oil from oregano cv. Pierre (formerly coded as OS10) illustrating the peak of carvacrol.

Representative chromatogram of the essential oil from oregano cv. Eli (formerly coded as OS37) illustrating the peak of carvacrol. 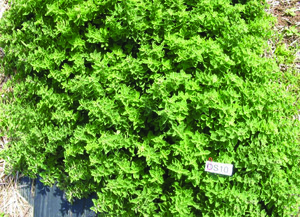 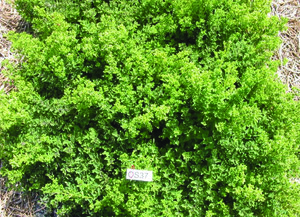