‘NuMex Odyssey’ originated from a hybridization between two open-pollinated, New Mexican–type green chile pepper cultivars, ‘Despanado’ (118W09-2) and ‘NuMex Joe E. Parker’ (115W09) in 2009. The maternal parent was an easy-destemming field selection from a population of ‘Despanado’, a chile pepper cultivar developed by Mr. Ed Curry (Curry Chile & Seed Co., Pearce, AZ). The paternal parent, ‘NuMex Joe E. Parker’, is a cultivar released by Dr. Paul Bosland and the NMSU Agricultural Experiment Station for the New Mexico chile pepper processing industry (Coon and Bosland, 2018). The F1 population (135W09) was grown in the greenhouse to produce F2 seed. In 2010, The F2 (138W10) and F3 (148W10) populations were also grown in the greenhouse to prevent outcrossing and to increase the amount of seed available for single seed descent field planting. In 2011, 307 observational plots were established from the F3 seed. Exceptional plots possessing tall plants with single main stems (no basal branching), high relative yields, and large green chile pepper fruit were selected. Seed from the selected lines was planted in the field in 2012. Single plant selections were made in the field from this germplasm in 2013. These exceptional plants were dug up at the end of the season before a killing frost, stripped of fruit and flowers, and potted in the greenhouse to generate self-pollinated seed. One of these selections (31W13-4) contributed to the pedigree of ‘NuMex Odyssey’. In 2014, an additional round of single plant selections refined mechanical harvest traits using the same selection criteria. Single plant selection 20W14-7 became ‘NuMex Odyssey’. This line was planted in 2015 (25W15) within an insect-excluding seed cage (Bosland, 1993) to increase seed quantity. During this growing season, off-type plants within the seed cage were removed to refine seed quality.

‘NuMex Odyssey’ was evaluated in replicated mechanical harvest field trials over 3 years (2016, 2017, 2018) at NMSU’s Los Lunas Agricultural Science Center, located ≈24 miles south of Albuquerque in central New Mexico. Trials were arranged in randomized complete block design with five replications in 2016, and seven replications in 2017 and 2018. The field soil texture at the Los Lunas Agricultural Science Center is Vinton loam. The fields were direct seeded then thinned to single plants spaced ≈8 inches apart. Row spacing was 30 inches and the field was furrow irrigated and fertilized according to standard local practices for New Mexican–type green chile peppers (Bosland and Walker, 2014). Data were collected from the inner 20 ft of the 30-ft single-row plots. ‘AZ-1904’, the most widely grown New Mexican–type green chile pepper cultivar for large-scale processing, and ‘NuMex Joe E. Parker’, shown to be the most efficient for mechanical harvest in previous tests that compared commercially available New Mexican–type green chile pepper cultivars (Havlik et al., 2018), were grown as standard controls in the trials.

Harvest was scheduled for peak season when most fruit were fully sized and marketable for green chile peppers (horticulturally mature) and not predominately red (physiologically mature). Immediately before harvest, plant attributes were measured in the same experimental plots used for mechanical harvest trials. Thirty plants within each plot were measured for height, width, height to main stem bifurcation, stem diameter, and number of basal branches (branches originating below the main bifurcation that bear fruit).

Plots were harvested with a one-row, tractor powered Etgar Series MOSES 1010 (Bet-Lehem-Haglilit, Israel) (Fig. 1) mechanical harvester equipped with a picking head equivalent to the commercial Yung-Etgar evaluated in earlier field tests. Although there was a negligible amount of fruit on the ground, all fruit and debris on the ground alongside the harvest areas were manually removed immediately before harvest. The machine proceeded through the field at 1.1 mph; the counter-rotating helix head speed was adjusted as needed for even flow of fruit on the conveyors at the start of the trial. All material picked from each plot was bagged separately. Chile pepper fruit left in each plot following the harvest was collected according to the categories “fruit attached to the plant” and “fruit knocked on the ground” during the harvest operation. Fresh fruit weights obtained from these two categories represented field loss. The harvested material was promptly transferred to a plant processing laboratory and sorted into categories: marketable green fruit (Fig. 2), broken or damaged fruit, red fruit, diseased fruit, and extraneous plant material (stems and leaves). The fresh weight was obtained for each category of sorted material for each plot. Material in the red and diseased categories was insignificant and uniform among cultivars and is therefore not included in the reported data. A subset of 10 representative fruit from the marketable material in each plot was sampled for additional fruit measurements. Measurements taken on these fruits included length, width, and pericarp thickness. In addition, heat level was measured on composite samples of the marketable fruit using the protocol developed at NMSU that uses a reverse-phase high-performance liquid chromatography system with fluorescence detectors (Collins et al., 1995). 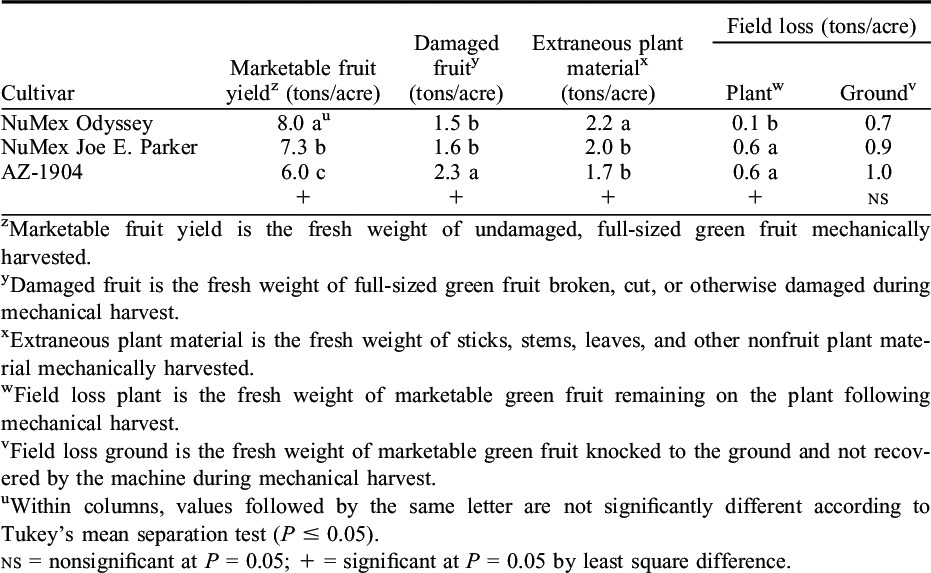 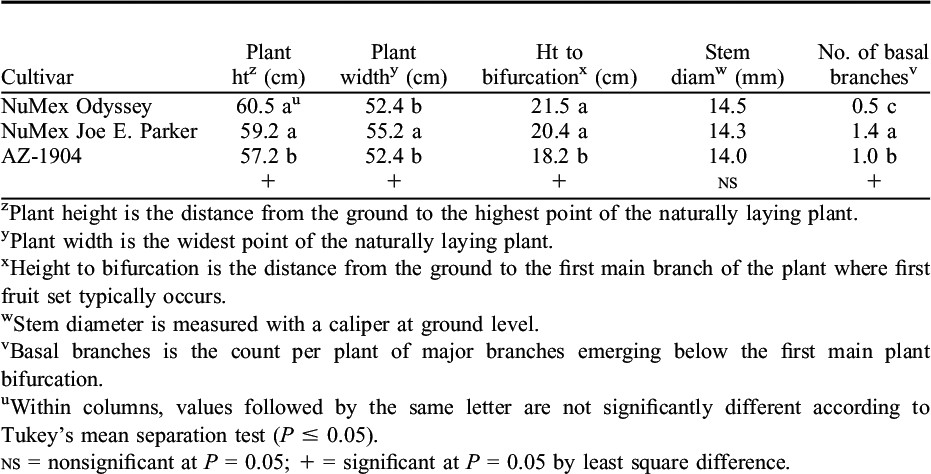 ‘NuMex Odyssey’ fruit width was similar to ‘NuMex Joe E. Parker’ and ‘AZ-1904’, whereas its fruit length was shorter than ‘AZ-1904’ and longer than ‘NuMex Joe E. Parker’ (Table 3). Pericarp thickness of the fruit was similar to ‘NuMex Joe E. Parker’, but thinner than ‘AZ-1904’. Favorable flavor evaluation reported for ‘NuMex Odyssey’ was determined by taste tests of the fresh fruit by knowledgeable program personnel and chile pepper industry representatives. Although ‘NuMex Odyssey’ has not been screened for specific pathogen tolerance, diseased and off-type plants were rogued from the populations during the selection process so that only vigorous plants adapted to growing conditions in New Mexico were advanced during the breeding process. 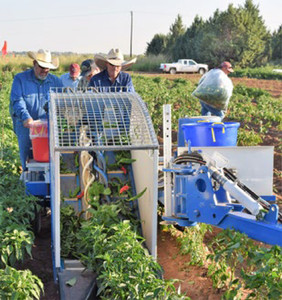 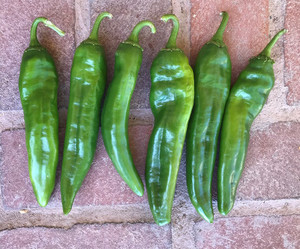