Eastern redbud (Cercis canadensis L.) is a popular small landscape tree. In the two most recent U.S. Department of Agriculture (USDA) Censuses of Horticultural Specialties, redbud was the fifth most valuable deciduous flowering tree in the United States. As reported in the USDA Censuses of Horticultural Specialties, economic value of redbuds increased from ≈21.8 million in 2009 to 28.4 million in 2019 (USDA-NASS, 2009; USDA-NASS, 2015; USDA-NASS, 2020). Eastern redbud is widely used in landscaping because of its moderate size and wide adaptability (Werner and Snelling, 2010). Mature redbud can range from small shrubs to medium trees, grow in full sun to shade, and are hardy from USDA zones 4 to 9 (Kidwell-Slak and Pooler, 2018; Raulston, 1990). Their showy early spring flowers and heart-shaped foliage also contribute to their popularity (Kidwell-Slak and Pooler, 2018).

Diverse morphologies in eastern redbud have been used in breeding for increasing their ornamental value and diversifying landscaping utility (Roberts et al., 2015). Popular traits like leaf color mutations (purple, gold, variegated), double flowers, compact growth, and weeping architecture are found in many current cultivars (Kidwell-Slak and Pooler, 2018). The inheritance and allelism of many of these popular traits have been studied (Roberts et al., 2015). For example, Roberts et al. (2015) demonstrated that purple leaves of ‘Ruby Falls’, ‘Forest Pansy’, and ‘Greswan’ were all controlled by the same recessive allele (pl1). Two nonallelic weeping genes were reported; the weeping gene of ‘Covey’ and ‘Ruby Falls’ (wp1), and the weeping gene of ‘Traveller’ (C. canadensis var. texensis) (Roberts et al., 2015).

Compact redbud cultivars are popular in the market because of their ability to fill specific landscape niches (Fantz and Woody, 2005). ‘Ace of Hearts’ and ‘Little Woody’ are nonweeping, compact cultivars released in 2005 that were selected from a bulked seed population that originated from Morganton Nursery (Morganton, NC) and do not have clear pedigrees (Fantz and Woody, 2005). ‘Ace of Hearts’ is a popular compact cultivar with a dome-shaped canopy and small, heart-shaped leaves (Fantz and Woody, 2005). Although its unique compact form is a valuable ornamental trait, the inheritance of compact growth habit is unclear. Understanding its inheritance will assist breeders using the compact trait in future breeding efforts.

In this research, hybrid families, including F1, F2, and reciprocal backcross families of ‘Ruby Falls’ (noncompact/weeping architecture/purple leaf) × ‘Ace of Hearts’ (compact/nonweeping architecture/green leaf) were created and used to 1) study the inheritance of the compact trait derived from ‘Ace of Hearts’, and 2) investigate linkage relationships between the genes controlling compactness, weeping, and purple leaves.

Hybridizations of potted parental plants were conducted in the North Carolina State University Horticulture Field Laboratory greenhouse in Raleigh, NC, in 2011. Modified seed scarification treatment was used (Banner and Stein, 2008). Harvested seed was sown after acid scarification treatment and 2-month cold stratification at 4 °C. For acid scarification, seed was submerged in concentrated (18.4 M) sulfuric acid for 30 min. Seed was gently stirred briefly every 2 min for the first 10 min, and at 5-min intervals thereafter. Acid-scarified seed was then rinsed and cold stratified for ≈2 months. A total of 27 F1 plants were ultimately recovered. F1 plants were grown in the greenhouse in 2011 until being transplanted into a field isolation block in Winter 2012 at the Sandhills Research Station, Jackson Springs, NC.

To create the F2 family, one F1 tree was dug from the field, planted in a 95-L pot, and brought to the greenhouse for crossing. In Mar. 2015, branches containing flower buds were cut from multiple F1 trees in the field and brought to the greenhouse for flowering. Mixed pollen from the cut branches was bulked and used to pollinate the single F1 tree. F2 seed was harvested in Fall 2015, and acid scarified and cold stratified before being sown in January 2016. Resultant seedlings were grown in the greenhouse in individual pots to a height of ≈15 cm and transplanted to the field in May 2016 at the Sandhills Research Station. Trees were evaluated for leaf color, weeping/nonweeping, and compact/noncompact characteristics in Oct. 2016 (Fig. 1).

Hybridizations to create backcross families BC1P1 and BC1P2 were conducted in Mar. 2017. To create the BC1P1 family, bulked pollen from two F1 individuals was used to pollinate one ‘Ruby Falls’ tree in the greenhouse. To create the BC1P2 family, pollen of ‘Ace of Hearts’ was used to pollinate one F1 individual in the same greenhouse. BC1P1 and BC1P2 seeds were harvested in Sept. 2017, scarified and stratified as described previously, and sown in Jan. 2018. Seedlings were grown in the greenhouse in individual pots to a height of ≈15 cm before being transplanted into the field plots in May 2018. Trees were evaluated for leaf color, weeping/nonweeping, and compact/noncompact characters in Sept. 2018 (Fig. 1).

Inheritances of the three traits.

Segregation ratios and tests for goodness of fit for weeping in F1, F2, and backcross families derived from hybridization of Cercis canadensis ‘Ruby Falls’ (weeping) × ‘Ace of Hearts’ (nonweeping).

Data for the compact trait (Table 1) in the F2 family fit the expected 3:1 ratio based on segregation of a single recessive gene (P value = 0.053 > 0.05). The BCIPI family segregation also fit the expected 1:1 ratio based on control by a single recessive gene (P value = 0.36 > 0.05). Although we accepted the single recessive gene model, the P value of the F2 family was borderline significant. The observed number of compact plants in the F2 and BC1P1 families was slightly less than expected. This phenomenon could be explained by the possibility of slightly reduced fitness and survival of compact progeny during germination or early seedling growth. We propose that ‘Ace of Hearts’ has a genotype cp1cp1 (compact) and ‘Ruby Falls’ has a genotype CP1CP1(noncompact).

In this research, phenotypes of F1 and BC1P2 progeny were all nonweeping, consistent with the single recessive gene model (Table 3). The F2 and BC1P1 families fit the expected 3:1 (P value = 0.77 > 0.05) and 1:1 (P value = 0.06 > 0.05) segregation ratios, respectively, again consistent with the single recessive gene model. Like the compact trait, the observed number of weeping plants in the F2 and BC1P1 families was slightly lower than expected, which could be explained by reduced survival of weeping progeny in seed or during early seedling growth. Segregation ratios of the weeping trait in the F1, F2, BC1P1, and BC1P2 families are consistent with the earlier report that the weeping trait is controlled by a single recessive gene (Roberts et al., 2015).

Linkage of the three traits.

Results of plant numbers and the odds ratio independence tests between trait comparisons are listed in Table 4. Cosegregation of compact/weeping and purple/weeping genes passed the odd independence tests, and there was no significant deviation between the observed segregation numbers and the expected 9:3:3:1 segregation ratio, suggesting no linkage (Table 4). However, cosegregation of the compact and purple leaf traits deviated significantly from the expected 9:3:3:1 ratio (P value = 0.02 < 0.05); this deviation from the expected 9:3:3:1 ratio cannot be explained as due to linkage. In the present research, the two parental cultivars were Ruby Falls (noncompact/purple leaf) and Ace of Hearts (compact/green leaf), with the genes in the repulsion phase. One would expect that deviation due to linkage would result in greater numbers of parental combinations than expected; however, increased nonparental type and reduced parental type phenotypes were observed, arguing against linkage. Thus, our data for testing linkage between these two genes is inconclusive, and further studies are required to resolve this inconsistency.

Like many woody ornamental plants, redbud has a longer generation time than most herbaceous species, thus breeding and selection can be time-consuming and costly. The results of this study can be useful for future redbud breeding efforts, especially in programs focusing on the development of compact cultivars, by allowing the appropriate breeding strategies and population sizes to be determined. Future molecular studies on redbud can confirm the results of this study, and perhaps resolve the inconclusive results of linkage between the compact and purple leaf genes as described in this study. Whole genome sequence studies potentially would allow the identification of the exact gene sequences and locations of these three traits.

This study is the first to report that the compact trait derived from ‘Ace of Hearts’ is controlled by a single recessive gene, designated cp1. Furthermore, our study confirms prior research that single recessive genes control both purple leaves (pl1pl1) and weeping architecture (wp1wp1). Linkage analysis revealed no evidence of linkage among these three traits. 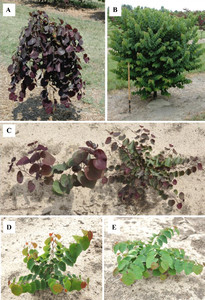