Peperomia, a member of the family Piperaceae, is a large, pantropical genus comprising ≈1600 species worldwide (Frodin, 2004; Lim et al., 2019). Many species and cultivars of Peperomia have been popular as small houseplants since the 1930s (Griffith, 2006).

In Hawaii, the genus Peperomia comprises two indigenous and 23 endemic species (Wagner et al., 1999). These account for nearly one-quarter of the species diversity in the Pacific Islands (Lim et al., 2019). Although several Hawaiian species possess a compact growing habit and have interesting leaf and stem coloration, research of the ornamental potential of these native species has been limited. Currently, Peperomia blanda is the only native Hawaiian species that is commercially sold as an ornamental/landscape plant in the state (Baldos and Corpuz, 2019).

Peperomia sandwicensis Miq. is a small perennial herb that is endemic to the islands of Kauai, Oahu, and Molokai. It typically grows up to 30 cm tall and is found growing on top of moss-covered rocks, in soil, or as an epiphyte in wet to mesic valleys to wet forests at elevations between 250 and 1220 m above sea level (Wagner et al., 1999). Its small size, dark green upper leaf surface, reddish stems, and reddish leaf undersides suggest its potential use as an indoor plant. This germplasm release article describes ‘Palikea’, an Oahu Island selection of Peperomia sandwicensis.

Peperomia sandwicensis ‘Palikea’ has a compact growth habit that is suitable for small containers (7.6- to 10.2-cm diameter pots) (Fig. 1). Leaves are elliptic, thick, fleshy, 0.7 to 1.7 cm wide, and 0.9 to 2.4 cm long. The upper leaf surface is glabrous and dark green (RHS N137A), usually with three light green (RHS 138D) veins radiating outward from the base of the leaf (Royal Horticultural Society, 2007). Aside from the three main veins, smaller, light green secondary veins may also appear on the upper leaf surface. These veins may be slightly impressed on the surface (Wagner et al., 1999). Leaf undersides are pubescent and red–purple (RHS 59A) with light green (RHS 138D) to pinkish (N170D) venation. Stems are ascending to weakly erect (Wagner et al., 1999), and there is good branching. Stem color ranges from red–purple (RHS 59A) to greyed orange (RHS 166A). The average length of the internodes is 1.3 cm. Floral spikes are solitary and produced terminally or sometimes laterally (Wagner et al., 1999). The spike length can be up to 13 cm. Its slight curvature adds ornamental value. Plants have an average of 3.9 basal shoots at 1 year after propagation from leaf cuttings.

Plants were grown indoors (22.6 °C and 59.5% relative humidity) for 7 to 9 months under LED growlights (2-ft Growlight; Feit Electric Company, Pico Rivera, CA) with a daily light integral of 4.3 mol⋅m−2⋅d−1. Two months before the indoor trial, plants were potted in the final plastic pots (7.6 cm in diameter, 8.0 cm tall). These were filled with the same media and the same rate of slow-release fertilizer. Plants were hand-watered using a watering can twice every week.

Plants were grown under T8 replacement LED light bulbs (Hyperikon, Indianapolis, IN) for 2 months at a DLI of 8.6 mol⋅m−2⋅d−1, which was then lowered to a DLI of 4.3 mol⋅m−2⋅d−1 at 1 week before the experiment. In May 2020, the plants were sorted based on size and placed under three T8 replacement LED lighting conditions [DLI = 2.9 mol⋅m−2⋅d−1 (control), 0.4 mol⋅m−2⋅d−1 (office light), and 0.2 mol⋅m−2⋅d−1 (low light)]. Plants were hand-watered once per week with 30 mL of tap water. The experiment was performed using a randomized complete block design with six replicates. Plant size was considered a blocking factor. Height and canopy diameter at 0, 3, and 6 months under the three light conditions were recorded. Visual quality ratings [1 = poor; 2 = fair (not saleable); 3 = acceptable (saleable); 4 = good quality; and 5 = excellent quality] adapted from Henny and Chen (2011) were also recorded at 0, 3, and 6 months. Data from each month were analyzed using analysis of variance procedures in Statistix 10 (Analytical Software, Tallahassee, FL). Because height data collected at 3 months showed significance for nonadditivity, log transformation was performed before reanalysis. Significant treatment means were separated based on the Tukey’s honestly significant difference test at P < 0.05.

Height, canopy diameter, and visual quality of Peperomia sandwicensis ‘Palikea’ after 0, 3, and 6 months of growth under three light levels and interior conditions (22.6 °C and 59.5% relative humidity). 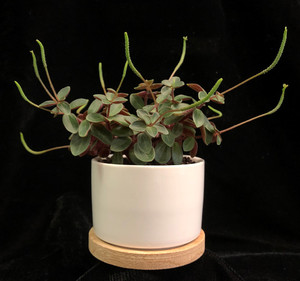