Apricot breeding at the Research Institute for Fruit Growing and Ornamentals started with selections from the local population in 1950. Hungarian best, Ceglédi óriás, Mandulakajszi, and other delicate and processable cultivars were released from this stage of breeding. Cross-breeding started in 1970 using Caucasian wild apricot seedlings for their good abiotic and biotic stress tolerance. There was an important focus on late flowering, big yields, good abiotic and biotic stress tolerance, and good fruit quality (large fruit size, good taste, firmness, and long shelf life). Several hybrid cultivars (Ceglédi arany, Ceglédi zamatos, Ceglédi szilárd, Nyujtó Ferenc emléke, and others) were released from this stage of research, resulting in a total of 17 cultivars (Szalay et al., 2005). These Hungarian cultivars and other modern Sharka (Plim pox virus)-resistant cultivars are used during the current stage of the breeding program (Brózik and Kállay, 2000; Soltész, 1998).

This trial was located at the Research Station of Cegléd, Research Center for Fruit Growing, Hungarian University for Agriculture and Life Sciences. This region has a temperate continental climate with a semi-arid microclimate. The altitude is 96 m above sea level, and its surface is flat, with some local differences (by 1–2 m). One-third of the Hungarian apricot-growing areas are situated among similar locations. This experimental orchard was planted in Fall 2010 in 5- × 8-m spacing (5 m between the trees and 8 m between the rows). Living mulch between the rows was sown with grass during the next fall. The irrigation has not yet been resolved. Pruning is performed twice per year, as is foliar fertilization. Plant protection is outstandingly respected.

‘Gönci 83’ is a clone of ‘Hungarian Best’ selected for abiotic stress tolerance. Hungarian Best is widely used as a control cultivar in central Europe. It has a very good taste and juicy and firm flesh. The nearly round fruits have great skin color. The fruits of ‘Roxana’ have a very similar appearance (but these are a bit elongated), and the tree is less vigorous. It is another control cultivar used in the eastern part of Europe and in the Balkans (Milošević et al., 2013). Ceglédi bájos is a new cultivar selected for its good fruit quality and easy management (Fig. 1). The Hungarian name “bájos” means “charming,” and “Ceglédi” refers to the name of the Research Station.

Three replicates were settled for every cultivar, with three trees per replicate. Replicates were planted at a totally random arrangement. Fruit characteristics and phenological traits were measured (Bujdosó and Cseke, 2021; Milatovic et al., 2017; Milošević et al., 2014) using digital calipers and a digital scale. The shape index was calculated using the following equation:

‘Ceglédi bájos’ was selected from the seedling population of the ‘Ceglédi hajnalpír’ × ‘Korai piros’ cross. Both of these are Hungarian landraces. Its first flowers appear at the same time as those of ‘Gönci 83’ and 2 d before those of ‘Roxana’. The flowers bloom on spurs and shoots as well. Flowers are highly frost-tolerant (data not shown); therefore, this cultivar has less risks during late spring frosts. All cultivars used during this experiment are self-fertile. The flowering intensity is medium, except for that of ‘Roxana’. The most flowers were on ‘Roxana’, with 42% more than that of the two aforementioned Hungarian cultivars. The harvest date is similar for these cultivars (Fig. 2). The mean ripening time of ‘Gönci 83’ is at the beginning of July (second), followed by that of ‘Roxana’ on 5 July, and that of ‘Ceglédi bájos’ on 8 July, with overlap occurring for a few days. The Hungarian cultivars have an intermediate vigor, whereas Roxana has weaker growth (Table 1). The growth habit of ‘Ceglédi bájos’ in contrast to that of the other two cultivars is semi-erect. Because of its semi-dense branching and other traits, the tree management of this cultivar is the easiest. Unfortunately, ‘Roxana’ is susceptible to monilia. ‘Gönci 83’ is selected for abiotic stress tolerance, but it also has moderate tolerance against monilia. ‘Ceglédi bájos’ is moderately resistant to monilia. The vegetative traits show that all three cultivars have similar properties. There are no major differences except for the easier handling of ‘Ceglédi bájos’.

Regarding their other aspects, these three cultivars are similar and have no significant differences. All are freestone and have a similar color, with 45% to 50% cover color. The soluble solid contents range between 15.3 and 18.7 °Brix, and it has a very good taste. All these properties signify that they can complement each other in an orchard.

In summary, ‘Ceglédi bájos’ has large, spectacular, and tasty fruits, heavy crops from the early years, and mid-time flowering. It is self-fertile and has good abiotic stress tolerance. During its ripening time, it has the best characteristics among the Hungarian apricot assortment. It is a prospective and conducive new cultivar.

‘Ceglédi bájos’ was registered on the Hungarian National List of Varieties in 2019. Propagation and cultivation trials have been settled in several places in Hungary. It is easy to propagate this cultivar by budding, and every myrobalan and apricot rootstock is suitable. Virus-free plant material will be available in the nuclear stock of our Research Institute.

Blooming time and harvest date of ‘Ceglédi bájos’ compared with those of ‘Gönci 83’ and ‘Roxana’. 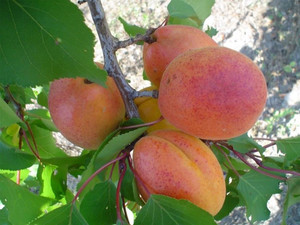