Ornamental crabapples or flowering crabapples of the genus Malus in the Rosaceae family are woody plants from the temperate zone cultivated mainly for their luscious display of flowers in spring as well as attractive fruit in autumn and winter (Fiala, 1994; Huang et al., 2020; Lu et al., 2016). The diversity of growing habits and tree shapes available also contribute to their immense popularity in North American suburban garden landscapes. In China, ornamental crabapple trees are a representation of one’s financial prowess and social standing, and “symbolize everything good in Chinese painting, poetry, and the garden arts” (Guo et al., 2019).

In the past decade, extensive research and fieldwork in ornamental crabapple cultivation and breeding have extended their leaf colors from green to a broad spectrum of red and purple hues (He et al., 2017; Zhang et al., 2018a; Zheng et al., 2008), further adding to their appeal.

The new yellow-leaf crabapple cultivar, Malus spectabilis ‘Duojiao’, was derived from a natural mutant of the species M. spectabilis ‘Riversii’, and its attractive foliage distinguishes it from other crabapple cultivars. New, unfolded leaves are initially reddish-yellow, then gradually lighten to an attractive yellow with strong leaf surface glossiness. Young leaves turn from yellow to yellowish green, with irregular green patching along their central veins, finally maturing into dark green. These foliage characteristics were found to be stable and consistent during a 4-year observation period.

Yellow-leaf mutants are well-documented in many other plant species (Li et al., 2015; Lu et al., 2017; Lyu et al., 2017). However, despite the abundance of crabapple cultivars with attractive foliage colors, no cultivar before the discovery of ‘Duojiao’ was reported to have yellow leaves, making this an important milestone in the research and breeding programs of color-foliage crabapples. ‘Duojiao’ is a rare, deciduous yellow-leaf cultivar ideal for the study of plant photosynthesis, chlorophyll metabolism, and chloroplast development. The genetic mechanism of the leaf coloration in ‘Duojiao’, and the interplay between the photoperiod and the circadian clock in colored leaves of plants are still being explored (Johansson and Staiger, 2015). The results are expected to provide a technical reference to improve directional breeding of ornamental crabapples as well as other colored-leaf plants. In addition, the study of this unique cultivar will make significant contributions to the landscape plantings of ornamental crabapples.

A yellow bud mutation on M. spectabilis ‘Riversii’ was first observed in 2014 by Canhong Zhang in his nursery (Zhendong Nursery, Tai’an, Shandong Province, China, lat. 36°15′N, long. 117°16′E; temperate monsoon climate). Attempts to propagate the mutants—in the same locality where they were discovered—were made by grafting using M. robusta as the rootstock.

After 4 years of repeated propagation, observation, and selection, every individual showed stable and prominent yellow-leaf characteristics. On 11 Dec. 2018, the new cultivar was designated ‘Duojiao’ by the Forestry and Grassland Administration of China (accession no. 20180291).

Morphological traits, including branch length, leaf color, leaf dimensions, flower color, and fruit color, were evaluated using three samples per plant from five plants in Zhendong Nursery. M. spectabilis ‘Riversii’ was used as the standard for comparison (Tables 1 and 2). The test materials were the flowers and fruit of the long branches at two thirds the height of the tree, and the new slightly yellow leaves were obtained from four to six spreading leaves at the top of the long branches. The height of the tree (from the ground) and the diameter of the crown were measured with a meter scale. The transverse and longitudinal diameters of the fruit, and the diameter and pedicel length of flowers were all measured with a Vernier caliper.

The physiological characteristics of ‘Duojiao’ are described according to guidelines specified for ornamental apples by the International Union for the Preservation of New Varieties of Plants (2003) (Table 3). In accordance with these guidelines, tests were conducted to assess the cultivar’s distinctness, uniformity, and stability. All references to color are based on the Royal Horticultural Society (RHS) 2007 color chart. When conducting color comparisons, the objects were placed in the holes of the color chart under indoor scattered light according to the principle of maximum similarity (Liu, 2018). 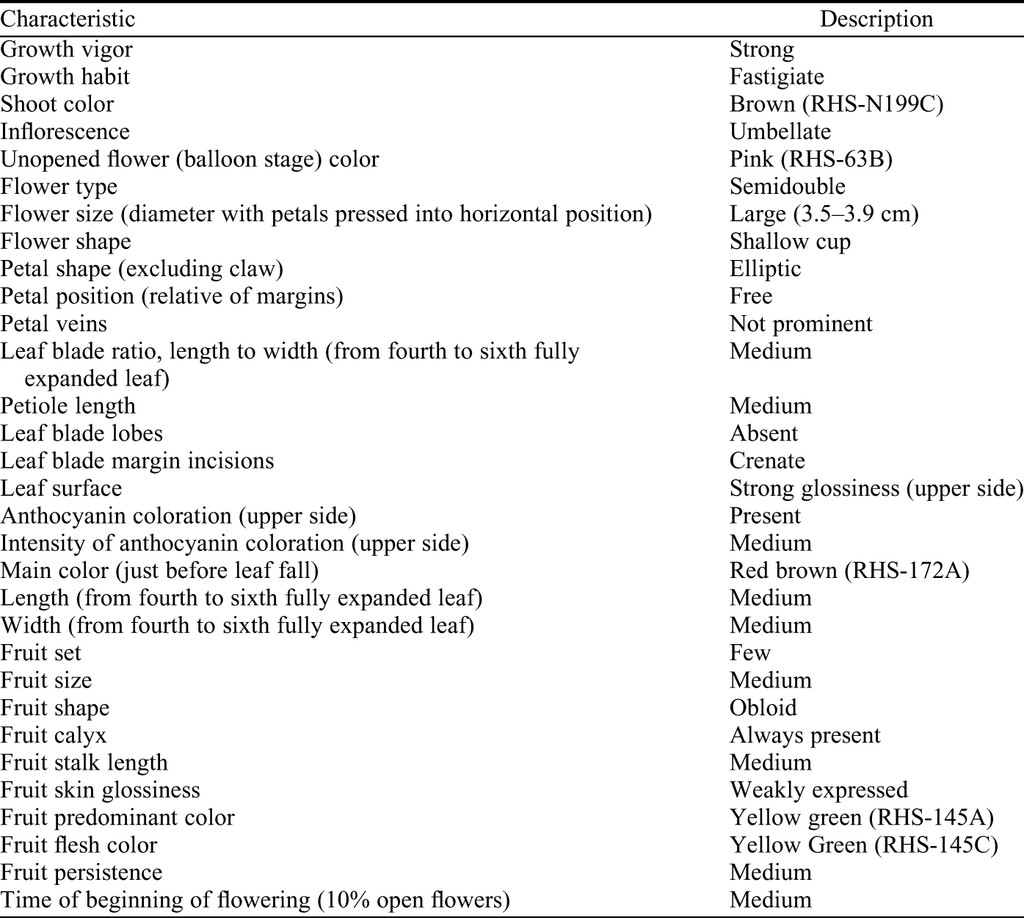 The unfolded young leaves were reddish yellow in early spring (Fig. 2), then gradually became orange yellow (RHS-14A), with a strong glossiness on the upper side. The young leaves turned from yellow to yellowish green, developing green spots of variable sizes along the main vein. The young yellow leaves were 4.8 to 8.8 cm in length and 3.5 to 5.3 cm in width. The shape was elliptic or ovoid elliptic, with sharply cuspidate tips and a broadly wedge-shaped or heart-shaped base. The stipules were lanceolate and the petioles were basal and purplish red with pubescence. The upper surface was smooth with no pubescence, and the leaf edges were crenate. Leaves were dark green at maturity. The new leaves were always yellow and presented a strong color contrast with the stems and more mature leaves.

Floral bud formation ability was strong in ‘Duojiao’, producing many axillary flower buds on long branches, with each umbel comprised of four to eight flowers. Flowers were pink (RHS-63B) at balloon stage, each with six to nine petals that form a corolla in the shape of a shallow cup. Petals were elliptic or oblong-elliptic, and arranged in two layers. Measuring 3.5 to 3.9 cm in diameter, the petals flattened in a horizontal position. The flowers of ‘Duojiao’ differed from those of ‘Riversii’ in color. The basal zone of the inner side of ‘Riversii’ was white (RHS-N999D), and that of ‘Duojiao’ was pink-violet (RHS-75D). The color of the marginal zone of the inner side of the petal of ‘Duojiao’ was pink (RHS-70C), the middle zone of the inner side was pink (RHS-68C), the basal zone of the inner side of the petal was pink-violet (RHS-75D), and the outer side was purple-red (RHS-N57A). Flowers of ‘Duojiao’ had light-green pistils, yellow anthers, and white filaments (Fig. 3). Similar to ‘Riversii’, ‘Duojiao’ began flowering in early April, and full bloom occurred in mid April in Tai’an. Using the terminology of the International Union for the Preservation of New Varieties of Plants (2003), it is considered “a medium flowering” crabapple cultivar.

The fruit set of ‘Duojiao’ was significantly less compared with ‘Riversii’. The fruit shape was obloid, with a vertical diameter between 1.5 and 2.0 cm, and a transverse diameter between 1.7 and 2.3 cm (Fig. 4A). The skin color was yellow-green (RHS-145A) and the pericarp was abscised. The pedicel was 2.20 to 3.75 cm in length, yellow-green (RHS-145A), and glabrous. The fruit pulp was yellow-green (RHS-145C) (Fig. 4B). Under Tai’an climatic conditions, the fruit ripened in late September to early October. The seeds were ovoid and pale brown. The most readily assessable indication of maturity was the change in the color of the skin from green to light yellow-green. The calyx, always present, was erect and shallow.

‘Duojiao’ has strong adaptability and is suitable for cultivation in Shandong Province in northeastern China, and areas with similar climatic conditions. Using an asexual propagation method, the plant was propagated primarily by budding using M. robusta and M. hupehensis as the rootstock. The trees in the nursery were planted at distances of 1.0 by 1.3 m apart. The crown shape of the tree was regular and natural. The trees were pruned regularly to improve wind flow and light transmission. No significant plant diseases or insect pests were observed in the natural planting; aphids were occasionally found and controlled by spraying pesticide. Juniperus sabina should be kept away from planting to avoid rust.

In consideration of all these traits—in particular, the striking yellow leaf color—it has been determined that ‘Duojiao’ is highly distinct from other crabapple cultivars.

Notes and Spreading Prospects in Cultivation

‘Duojiao’ is propagated by using M. robusta and M. hupehensis as the rootstock, and healthy, plump buds from the cultivar as the scion. ‘Duojiao’ is adapted for growing in full sun, and preferred soil that was slightly alkaline and calcareous. ‘Duojiao’ does not thrive when watered excessively or in regions with high humidity. This cultivar is suitable for planting in the northern, northwestern, northeastern, and eastern regions of China. ‘Duojiao’ shows great promise for use in garden landscapes, as well as for developing new ornamental crabapple cultivars.

Fruit characteristics of M. spectabilis ‘Duojiao’ (A) and color of the fruit pulp (B). 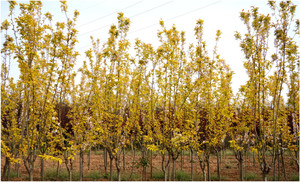 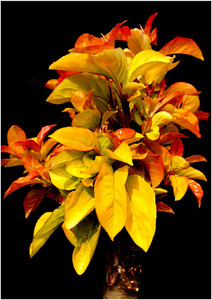 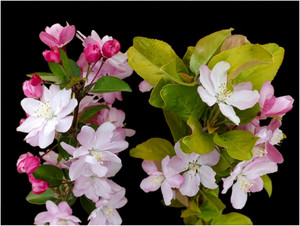 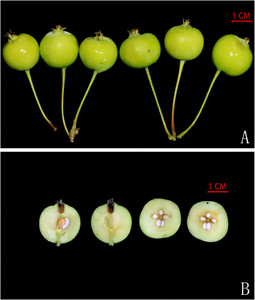