‘Twilight’ is a thornless, semi-erect, high-quality blackberry (Rubus subg. Rubus Watson) that has very firm, large, dark, and sweet fruit suited for the fresh market; it ripens in the early midseason for a semi-erect type of blackberry. ‘Twilight’ was released by the U.S. Department of Agriculture-Agricultural Research Service (USDA–ARS) breeding program in Corvallis, OR in cooperation with Oregon State University’s Agricultural Experiment Station. This cultivar is an offspring of blackberries similar in pedigree to Eclipse and Galaxy, that combine germplasm from the eastern and western North American blackberry germplasm pools (Finn et al., 2020a, 2020b). ‘Twilight’ produces good yields of very firm fruit with tough skin and an excellent, sweet flavor. ‘Twilight’ fruit should be well suited to fresh market production in the early-midseason because it was earlier than ‘Triple Crown’, had a similar appealing flavor as ‘Triple Crown’, but was much firmer and with a tougher skin. ‘Twilight’ is expected to be adapted to areas where other semi-erect blackberries (e.g., ‘Chester Thornless’, ‘Triple Crown’) can be grown successfully. A U.S. Plant Patent has been granted (USPP 30,879) (Finn, 2019).

‘Twilight’ was evaluated most extensively in trials at Oregon State University’s North Willamette Research and Extension Center (OSU-NWREC, Aurora, OR), Oregon State University’s Lewis Brown farm (Corvallis, OR), and Enfield Farms Inc. (Lynden, WA). In the Oregon trial plantings, standard cultural practices for semi-erect blackberry production were used, including annual pre- and post-emergent herbicide applications, spring nitrogen fertilization (78 kg·ha−1 N), post-harvest removal of floricanes, cutting of primocanes at 1.0 m to encourage branching, training of primocanes to a two-wire-trellis, and application of 2.5 to 5.0 cm of irrigation per week during the growing season, depending on rainfall. Delayed dormant applications of liquid lime sulfur and copper hydroxide were made to control leaf and cane spot (Septoria rubi Westend), purple blotch [Sphaerulina westendorpii (Westendorp) Verkley, Quaedvlieg & Crous (formerly Septoria rubi Westend)], rust [Kuehneola uredinis (Link) Arth.], and anthracnose [Elsinoe veneta (Burkholder) Jenk.] as a standard practice without any knowledge of the susceptibility of the selections in trial to these diseases. The cooperating grower in Washington is primarily a red raspberry (Rubus idaeus L.) grower, and even though plants were spaced and trained similarly to those in the Oregon trials, they were irrigated and received nitrogen fertilizer rates that were standard for red raspberry but greater than typical for blackberry. At OSU-NWREC, ‘Twilight’ was planted in a replicated trial in 2013, along with other selections and reference cultivars Chester Thornless and Triple Crown in a randomized complete block design with three replications (Galletta et al., 1998a, 1998b). Each experimental unit consisted of three plants. Each replication was harvested once a week to determine harvest season, yield, and average fruit weight (based on a randomly selected sub-sample from each harvest) (Finn et al., 2005; Finn and Strik, 2014). ‘Chester Thornless’ accounts for the largest area planted of semi-erect blackberry grown for the wholesale fresh market in the Pacific Northwest (Galetta et al., 1998a). ‘Triple Crown’ is commonly grown for roadside and farmers’ market sales where its large fruit size and outstanding flavor are prized, but its softness and tender skin prevent it from being shipped a significant distance. A weighted mean fruit mass was calculated that adjusts the average mean fruit mass based on the proportion of the total yield harvested on each pick (Finn et al., 2005, 2014). These data, collected from 2015 to 2017, were analyzed as a split-plot in time with a fixed effect model with cultivar as the main plot and year as the subplot, with mean separation by least significant difference (lsd; SAS PROC GLM, Cary, NC). lsd are only presented when there were significant differences for the trait. Of the multiple genotypes harvested from this replicated trial, only the data from ‘Twilight’ and the reference cultivars were included in the analysis (Table 1). The cultivar × year interaction was significant for yield, but not for fruit weight.

Berry weight and yield in 2015–17 for ‘Chester Thornless’, ‘Twilight’, and ‘Triple Crown’ blackberries at Oregon State University’s North Willamette Research and Extension Center (Aurora, OR); planted in replicated trial (three plots of three plants each) in 2013.

Fruit evaluations were made weekly during the harvest seasons using a 1 to 9 scale (9 = the best expression of each trait). The subjective fruit ratings included drupelet fertility (rating of drupelet set), firmness (as evaluated by hand in the field on six to eight fruit), color (ideal is a solid, dark black), shape (with a uniform, long conic berry being ideal), texture (as rated when chewed while tasting berries in the field), separation (how easily the ripe fruit were separated from the plant), and flavor (rated by tasting fruit in the field) (Table 2). Fruit glossiness (ideal is glossy), skin toughness (while holding fruit, thumb was rubbed across the fruit surface and ideally the skin surface did not break and “bleed”), and tolerance of heat/ultraviolet light damage (when fruit were fully ripe, the incidence of bleached or sunburned fruit was scored where 9 = no evidence of injury) were rated in 2015–17. The number of fruit per lateral was determined based on counting the fruit on five typical fruiting laterals in each plot once during the season in 2015–17.

The fruit ripening season in Oregon was characterized by the dates on which 5%, 50%, and 95% of total yield was harvested (Table 5). Plant ratings were conducted once each year during the fruiting season for primocane and floricane vigor, flowering or fruiting lateral length (1 = very short; 5 = very long) and strength (1 = weak, droopy; 5 = stiff, sturdy), and damage due to winter injury (1 = dead; 9 = no injury) (Table 6).

Ripening season estimated as the date at which yield passed the given percentage of total yield in 2015–17 for the semi-erect ‘Chester Thornless’, ‘Eclipse’, ‘Triple Crown’, ‘Twilight’, and ‘Von’, the trailing ‘Black Diamond’, ‘Columbia Star’, ‘Hall’s Beauty’, and ‘Marion’, and the primocane-fruiting ‘Prime-Ark®45’ at Oregon State University’s North Willamette Research and Extension Center (Aurora, OR); planted in 2013.

‘Twilight’ yield was moderate and comparable to the other commercial cultivars evaluated in the same trial (Table 1). Over the 3 harvest years, ‘Twilight’ was lower yielding than ‘Chester Thornless’ and ‘Triple Crown’; however, in individual years, it was statistically like one or the other. In this and other trials (Table 1, data not shown), ‘Twilight’ plants seem slower to establish, and yields during the first harvest years are less than when plants are well established (data not shown).

In multiple years of evaluation, ‘Twilight’ had percent soluble solids comparable with most cultivars evaluated (Table 3). The pH of the ‘Twilight’ fruit puree was in the range typically observed for blackberries, though it was higher than that of ‘Chester Thornless’, ‘Columbia Star’, ‘Eclipse’, ‘Hall’s Beauty’, and ‘Marion’. ‘Twilight’ fruit had lower titratable acidity than most of the trailing blackberries including ‘Black Diamond’, ‘Columbia Star’, ‘Hall’s Beauty’, and ‘Marion’. This combination of high soluble solids, moderate pH, and low titratable acidity levels puts ‘Twilight’ in a range that is desirable for fresh consumption, as the fruit are perceived as being sweet.

For all the blackberry cultivars evaluated, cyanidin-3-glucoside was the main anthocyanin (Table 4). The total anthocyanin concentration for ‘Twilight’, ‘Galaxy’ (Finn et al., 2020a), and ‘Black Diamond’ was much lower than the other three trailing blackberries (‘Columbia Star’, ‘Hall’s Beauty’, and ‘Marion’). ‘Twilight’ and ‘Galaxy’ (Finn et al., 2020b) had much lower proportions of cyanidin-3-rutinoside than the trailing blackberries. ‘Twilight’ had no cyanidin-3-dioxaylglucoside; while, at relatively low proportions, ‘Chester Thornless’, ‘Hall’s Beauty’, and ‘Marion’ were the only cultivars with detectable levels.

The trailing cultivars reached 50% ripe 14–18 d ahead of ‘Twilight’ (Table 5). ‘Von’ started and finished harvest a few days earlier than ‘Twilight’, but they had the same 50% harvest date. The 50% harvest date for ‘Twilight’ was 14 d ahead of ‘Triple Crown’ and 16 d ahead of ‘Chester Thornless’. Not surprisingly, based on ripening season, ‘Twilight’ began flowering 10 d before ‘Chester Thornless’ and ‘Triple Crown’ (Table 2). All cultivars ripened their crop much earlier than the primocane crop of ‘Prime-Ark®45’.

The primocanes of ‘Twilight’ were slightly less vigorous than those of ‘Chester Thornless’ and ‘Triple Crown’. While differences were noted for floricane vigor, they were not significant; all three of these cultivars grow very well vegetatively. What cannot be captured with a score, is how erect growth was in ‘Twilight’ after cutting the primocanes to 1 m in the summer. The laterals that break grow straight up and typically grow up to 1 m above the trellis. While different management practices were not tried, tipping the primocanes much lower to the ground and having the laterals that break fill the trellised canopy, as opposed to being over it, may increase the area of the fruiting zone and yield. ‘Twilight’ had shorter and stronger laterals than the two other cultivars (Table 6). All cultivars showed excellent winter tolerance wherever they were trialed. While the overall adaptation of ‘Twilight’ to the eastern United States has not been well tested, it has proven to be winter hardy in Arkansas (J.R. Clark, personal communication) and North Carolina (G.R. Fernandez, personal communication), but not in Massachusetts (P. Rizzo, personal communication). In Arkansas, ‘Twilight’ was susceptible to diseases, such as anthracnose, common in areas with warm summers and high humidity.

With a minimal spray program, no significant incidence of foliar or cane diseases occurred in Oregon. With a commercial raspberry fungicide program in Lynden (WA), no foliar or cane disease symptoms were observed. As with all semi-erect or erect blackberry genotypes growing in the western United States, ‘Twilight’ is susceptible to redberry mite (Acalitus essigi Hassan) and spotted winged drosophila (Drosophila suzukii Matsumura).

As mentioned, ‘Twilight’ is a thornless, semi-erect blackberry. It has good yields of firm fruit, featuring tough skins (Table 2) and a sweet flavor. The fruit should be well suited to fresh-market production in the early-midseason because it was earlier than ‘Triple Crown’. It had a similar appealing flavor to ‘Triple Crown’ but its skin was firmer and tougher. While ‘Twilight’ is expected to be adapted to areas where other semi-erect blackberries (e.g., ‘Chester Thornless’, ‘Triple Crown’) can be successfully grown, it should be evaluated in colder regions before being widely planted, as one of its grandparents is a winter-sensitive trailing blackberry.

Parentage of ‘Twilight’ was confirmed by microsatellite analysis using a fingerprinting set of eight simple sequence repeat (SSR) markers that we have developed at the USDA–ARS National Clonal Germplasm Repository to genotype our blackberry collection (Zurn et al., 2018). All the alleles amplified in ‘Twilight’ were found in at least one if its parents, ‘Ouachita’ and/or ORUS 2867-4 (Table 7). One to two alleles at five (RH_MEa007aG06, RH_MEa008cF01, ERubLRSQ_07-4_D05, RH_Mea0015cE06, and RH_Mea011dG03a) of the eight SSRs were uniquely shared with ‘Ouachita’; and one to two alleles (at all but RH_Mea0006bG05), could only be inherited from the other parent, ORUS 2867-4. This confirms pedigree of ‘Twilight’ as resulting from the cross between ‘Ouachita’ and ORUS 2867-4.

Genetic profiles of the parents, ‘Ouachita’ and ORUS 2867-4, and the offspring, ‘Twilight’ at each of the eight simple sequence repeat (SSR) markers in the blackberry fingerprinting set (Zurn et al., 2018). Allele composition for all three genotypes is listed for each SSR, and the light-gray highlighted alleles indicate alleles shared only with ORUS 2867-4, and the dark-gray highlighted alleles were inherited from the other parent, ‘Ouachita’.

When this germplasm contributes to the development of a new cultivar, hybrid, or germplasm, it is requested that appropriate recognition be given to the source.

‘Twilight’ is protected by U.S. Plant Patent PP 30,879 (Finn 2019). Further information or a list of nurseries propagating ‘Twilight’ is available on written request to Mary Peterson (USDA–ARS). Nurseries interested in a license for ‘Twilight’ should contact the Office of Commercialization and Corporate Development (OCCD) at Oregon State University. The USDA–ARS and Oregon State University do not sell plants. In addition, genetic material of this release has been deposited in the National Plant Germplasm System as CRUB 2802 (PI 682659), where it will be available for research purposes, including development and commercialization of new cultivars.

Pedigree for ‘Twilight’. The female parent is shown on top. 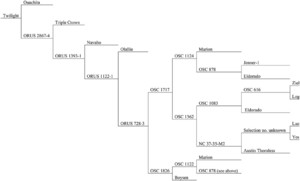 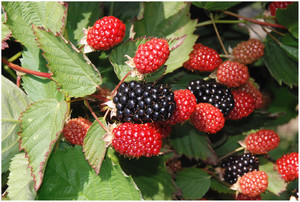 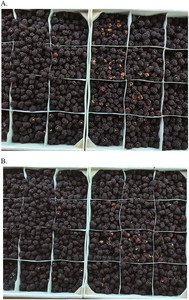 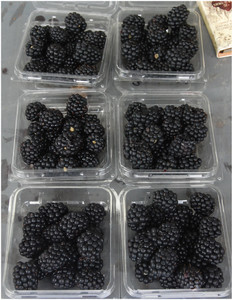