Pennisetum alopecuroides (L.) Spreng. is a perennial warm-season grass native to Asia and Australia. It is sometimes referred to “fountain grass”; however, be aware that a number of Pennisetum species are referred to as “fountain grass.” It is mainly used as an ornamental in the United States and it performs well in sunny locations. Cultivars usually range in height from 0.75 to 1.5 m (Missouri Botanical Gardens ‘Pennisetum alopecuroides’, n.d.).

Reduced seed production in vegetatively propagated ornamental plants is a desirable trait because it helps maintain the purity of the commercial cultivar. Seed set in Miscanthus sinensis has been reduced through ploidy manipulation (Ranney and Touchell, 2016) and gamma radiation (Hanna and Schwartz, 2019). ‘Desert Plans’ (Trucks, 2010) and ‘Ginger Love’ (Horvath, 2016) were cultivars developed from seedling selections, and ‘JS Jommenik’ (Spruyt, 2016) developed from a shoot mutation are among vegetatively propagated P. alopecuroides patented cultivars, but none report seed production for these cultivars in the patents. Blackman (2011) developed ‘Burgundy Bunny’ from a natural mutation and reported that no seed were observed, but did not report the comparison of this cultivar to a seed producing-genotype. Our objective was to use Cobalt 60 gamma radiation to reduce seed production in P. alopecuroides genotypes with desirable ornamental characteristics.

‘Tift H18’ (PP30724 P2) and ‘Tift PA5’ (PP31027 P2) are perennial P. alopecuroides grasses with desirable ornamental characteristics and significantly reduced seed production. Both were approved for release by the University of Georgia College of Agricultural and Environmental Sciences in 2016. We evaluated ‘Tift H18’ and ‘Tift PA5’ at Tifton, GA (lat. 31.4505°N, long. 83.5085°W; elevation, 107.9 m) and Blairsville, GA (lat. 34.8762°N, long. 83.9582°W; elevation, 573.9 m) in comparison with Tift PA24, a seed-fertile P. alopecuroides with desirable ornamental characteristics. Cultivars were tested on soil types Tifton loamy sand and Transylvania clay loam at Tifton and Blairsville, respectively. The active growing seasons are April through November at Tifton and May through October at Blairsville. Average monthly rainfall for the growing season was 114 mm and 90 mm at Blairsville and Tifton, respectively. Average monthly high temperatures for the growing season are 26 and 28 °C, whereas average monthly low temperatures are 13 and 16 °C for Blairsville and Tifton, respectively. Genotypes were evaluated for inflorescence and leaf height, canopy diameter, inflorescence length and number per plant, leaf length and width, and seed set. Data for each variable were subjected to analysis of variance, and Fisher’s least significance difference at P ≤ 0.05 was used for mean separation.

Vegetative plants of P. alopecuroides var. Hameln were obtained from Emerald Coast Growers in Spring 2008. We harvested open-pollinated (OP) seed from the plants in 2008 and transplanted 400 plants from the OP seed into a field nursery in 2009. Seeds were harvested from 50 plants with the most desirable ornamental morphological characteristics, and these seeds were irradiated in 2010 with 10 and 15 Kr Cobalt 60 gamma radiation. One hundred sixty-nine and 154 plants from the 10-Kr and 15-Kr treatments, respectively, were established in the field in 2010. Three plants from the 10-Kr treatment and three plants from the 15-Kr treatment with one or no seed per inflorescence (many sectors) were selected. These six plants had desirable ornamental morphological characteristics and were numbered 1 through 6. These six plants were propagated vegetatively by sections of the plants, with 3 o’clock being “a” and, moving counterclockwise around the plant, “b” being 12 o’clock, “c” being 9 o’clock, and “d” being 6 o’clock. The plants were transplanted to the field in 2011. As many propagules as possible were obtained from each section. Inflorescences from six plants from section 4b (15-Kr treatment) set various amounts of seed, but one plant (field entry 133) produced no seed and became ‘Tift H18’.

Seeds of the plant collection Tift PS989 (mixed genotypes of P. alopecuroides sent to the United States from Korea in 1989) were irradiated on 11 Nov. 2010 with 10 Kr Cobalt 60 gamma radiation, and 256 plants were planted into the field on 29 Mar. 2011. In 2011, six of the 256 plants grown from the 10-Kr-treated seeds were evaluated and selected based on morphological desirability and reduced seed set. OP pollinated seeds (a second generation of seeds) from these six selected plants were harvested and irradiated with 10 Kr Cobalt 60 on 10 Jan. 2012. Sixty-four plants were established in the field in 2012 from only one of the six plants selected in 2011. Plants grown from irradiated seeds usually have chimeras or sectors for the traits of interest. Therefore, each of the 64 plants was divided into four quadrants (as described earlier for ‘Tift H18’), and five or more inflorescences from each quadrant were examined for seed set. A highly seed-sterile sector “a” from plant no. 60 was selected and propagated asexually to produce ‘Tift PA5’.

‘Tift H18’ (Supplemental Figs. 1 and 2) and ‘Tift PA5’ (Supplemental Figs. 3 and 4) were tested at Tifton and Blairsville from 2012 through 2015. Evaluation tests consisted of five and four single-plant replications arranged in a randomized complete block experiment at Tifton and Blairsville, GA, respectively. Propagules were rooted and established in the greenhouse 6 weeks before being transplanted to the field on 160-cm centers. Weeds were controlled by both chemical and mechanical methods. Plots were irrigated only at planting to ensure uniform establishment. Other experimental entries were included in each test. Tift PA24 was selected from Tift PS1122 and served as the seed-fertile control with desirable ornamental characteristics (Supplemental Fig. 5).

Height of inflorescence of three Pennisetum alopecuroides grasses (Tift PA24 is the seed-fertile control) planted at two locations in Georgia. 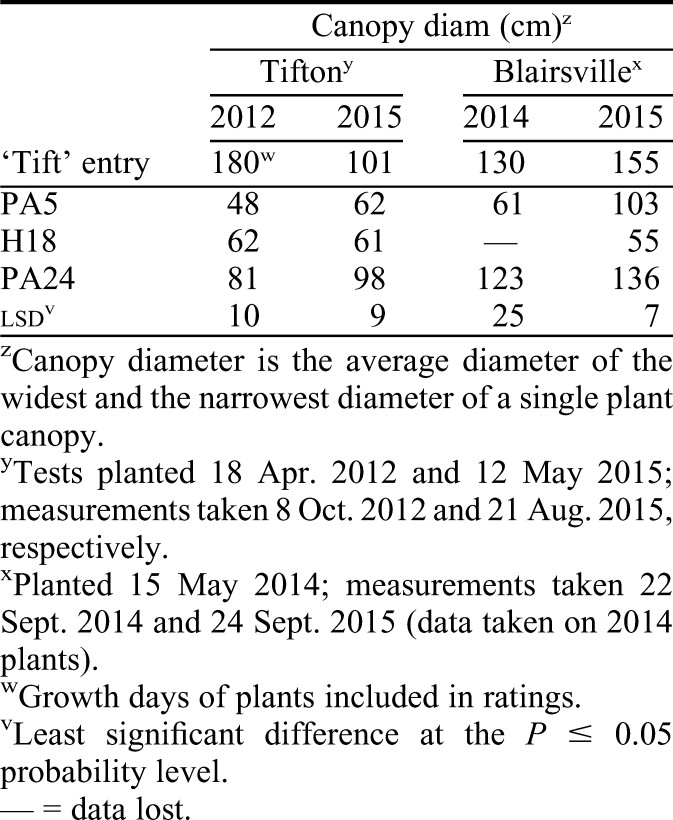 Number of inflorescences per plant of three ornamental Pennisetum alopecuroides grasses (Tift PA24 is the seed-fertile control) planted at two locations in Georgia.

‘Tift H18’ compares favorably with ‘Tift PA5’ at Tifton, but overall this selection did not perform as well in the replicated tests at Blairsville. We have no replicated data, but it appears that ‘Tift H18’ is sensitive to atrazine on heavier clay soils. However, we observed that ‘Tift H18’ performed well in isolated plantings where no herbicides were used. Mature plant color for ‘Tift PA5’ and ‘Tift H18’ was Green-141B and -139B, respectively, according to the Royal Horticultural Society (2007), whereas inflorescence colors were Greyed Orange-165B for both ‘Tift PA5’ and ‘Tift H18’.

‘Tift PA5’ and ‘Tift H18’ have desirable ornamental characteristics and will be cultivars with significantly reduced seed production. ‘Tift PA5’ and ‘Tift H18’ are finer and more petite cultivars best suited for pot arrangements and isolated plantings. Although we have tested these cultivars in only U.S. Department of Agriculture hardiness zones 7 and 8, this species is reported to grow in zones 5 to 9, but this species may not be a reliable winter-hardy perennial in zone 5 (Missouri Botanical Garden website: “Pennisetum alopecuroides”).

‘Tift H18’ at anthesis in maintenance plots (year of establishment) in Tifton, GA.

‘Tift H18’ at anthesis in yard (year of establishment) in Blairsville, GA. 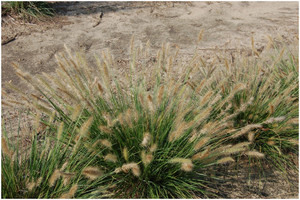 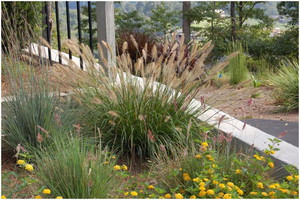 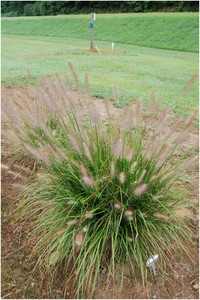 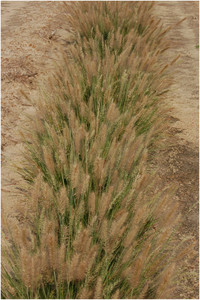 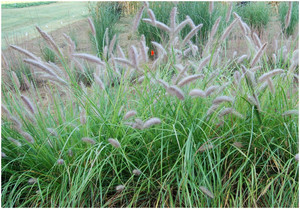