‘RubyCrisp’ is a muscadine grape (Vitis rotundifolia) that was released by the University of Georgia (UGA) College of Agriculture and Environmental Sciences (Athens, GA). ‘RubyCrisp’ produces high yields of large-sized berries with excellent taste and texture. ‘RubyCrisp’ berries are dark red in color, which is distinct from the normal bronze and dark purple colors of most muscadine cultivars. ‘RubyCrisp’ has hermaphroditic flowers and produces berries of similar size to those of the largest female cultivars (≈15 g). ‘RubyCrisp’ has a midseason harvest date with an average first pick on 21 Aug. in Tifton, GA. ‘RubyCrisp’ has a low percentage of dry pedicel scar and is not recommended for commercial packing for this reason. Excellent texture, attractive and unusual color, and overall eating quality suggest ‘RubyCrisp’ berries will be an ideal home-garden and pick-your-own cultivar.

‘RubyCrisp’ originated in Tifton, GA, from a cross of ‘Supreme’ by ‘Tara’ (Fig. 1) that was made in 2008. ‘Supreme’ is a female cultivar that produces black berries with exceptional size and firmness (Conner, 2009). ‘Tara’ is hermaphroditic and produces bronze berries with dry pedicel scars that ripen early in the muscadine harvest season (Conner, 2009; Lane, 1993). The original ‘RubyCrisp’ vine first fruited in 2010. The vine was selected in 2011 for its large berry size, hermaphroditic flowers, and excellent flavor and it was propagated for further trials as Ga. 8-1-338.

Vine yields were estimated by harvesting fruit from 1 m of the interior cordon (cordon most distal to the trellis post) and then multiplying the sample yield by the total cordon length. Vines were harvested in 2014–16 from one to four times depending on the uniformity of ripening, with the first harvest occurring as soon as ≈50% of the berries were ripe. Once the yield was weighed to give the total yield weight, the berries were then sorted. Berries with any visible signs of decay were removed and weighed to calculate percent berry rot. Of the undecayed berries, berries were sorted into those which had pedicel scar splits (large cracks in which the interior flesh was visible), pedicel scar tears (peeling back of the berry epidermis), and dry pedicel scars. Percentage of each of these categories was calculated by dividing the weight of each category by the total weight of all three categories and then multiplying by 100. Rotted berries and berries with pedicel scar split are commonly removed when commercial growers pack fruit, so percent usable yield was calculated by the following equation: 100 × (1 – % berry rot / 100) × (1 – % pedicel scar split / 100). Ten berries were immediately selected at random from the usable yield sample and measured for berry weight, diameter, and number of seeds. All 10 berries were then crushed together to provide juice to determine percent soluble solids.

Textural analysis of 20 ripe berries was carried out in a separate study. Textural analysis was conducted using an Universal Testing Machine TaxT2i Texture Analyzer (Stable Micro System, Godalming, Surrey, UK) equipped with an 25 kg load cell and a 2-mm flat cylinder probe. Skin tenderness was estimated by berry penetration work and pulp firmness by flesh maximum force as described in Conner, 2013. Textural analysis was conducted in 2012 for all cultivars except RubyCrisp and Hall, which were evaluated in 2014. All berries were sampled from the Tifton location.

Vines of ‘RubyCrisp’ are hermaphroditic (perfect flowered), and thus ‘RubyCrisp’ vines do not need a pollinizer. Leaves averaged 61 mm in length and 86 mm in width. Lateral canes are drooping and usually grow 1.4 m or more in a growing season at Tifton, GA. Total yield of ‘RubyCrisp’ was excellent and consistently ranked among the highest yielding cultivars in all years of this trial (Tables 1 and 2). Percent usable yield was less than ‘Paulk’ and similar to the other check cultivars in Tifton, GA (Table 1), and less than ‘Paulk’, ‘Hall’, and ‘Supreme’ in Wray, GA (Table 2). Usable yield was reduced by both rot and pedicel scar split (Table 3). Percentage pedicel scar split was higher than the recent commercial cultivar releases Hall and Paulk (Table 3). Overall percentage of dry scar was also lower than ‘Hall’, ‘Paulk’, and ‘Supreme’ (Table 3). Berry firmness was similar to ‘Paulk’, less than ‘Supreme’, and more than ‘Fry’ at harvest (Table 4). However, after 11 d of storage, berry firmness was less than both ‘Paulk’ and ‘Supreme’ and similar to ‘Fry’. The ability to pick berries with a dry scar and firmness in storage are vital traits for a commercial packing berry (Mortensen, 2001), and the low percentage of dry scar and softening during storage of ‘RubyCrisp’ make it unfavorable for this use.

Yield (kilograms/3 m vine) of ‘RubyCrisp’ and standard muscadine cultivars at Tifton, GA, in the third through fifth years of growth (2014–16). 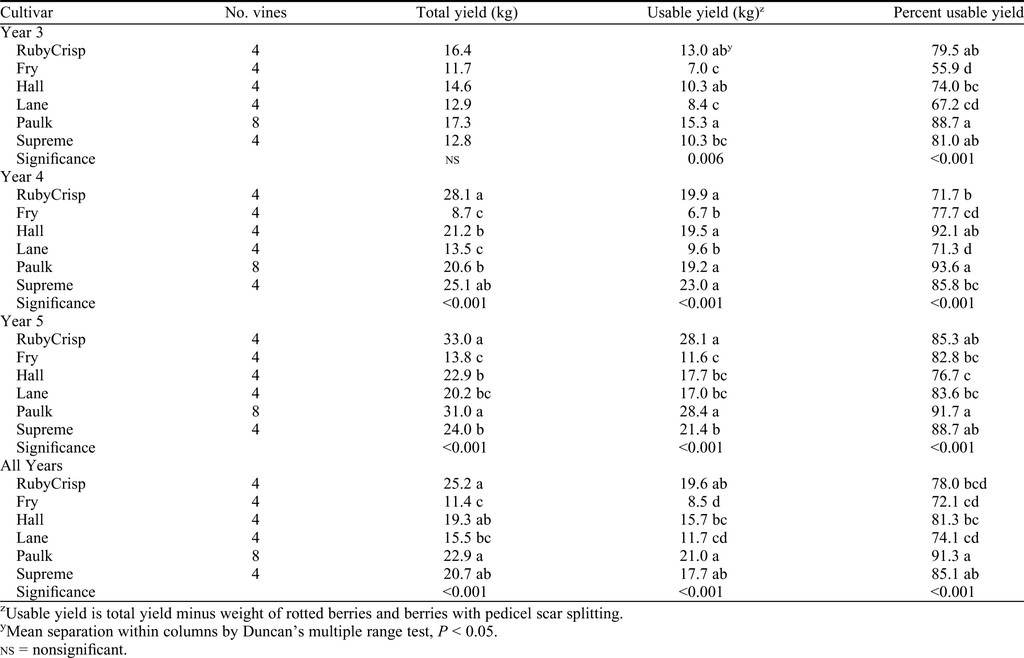 Yield (kilograms/6.1 m vine) of ‘RubyCrisp’ and standard muscadine cultivars at Wray, GA, in the third through fifth years of growth (2014–16). 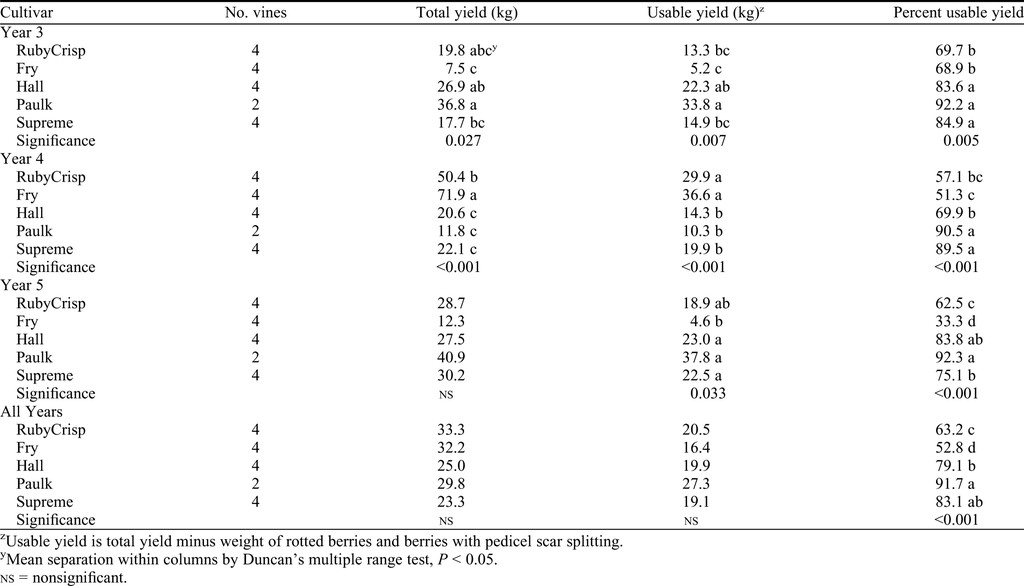 Flower and fruit attributes of ‘RubyCrisp’ and standard muscadine cultivars at Tifton, GA, in the third through fifth years of growth (2014–16).

Average first harvest of ‘RubyCrisp’ was 21 Aug. (Table 3), which was similar to the midseason check cultivars Supreme, Fry, and Paulk. Normal harvest seasons extended into the first week of September. Berry size of ‘RubyCrisp’ was similar to ‘Supreme’ and ‘Paulk’ and larger than all other check cultivars (Table 3). There was an average of three seeds per berry, which was similar to the hermaphroditic check cultivars and higher than the female check cultivars (Table 3). Percent soluble solids was higher than all other cultivars except ‘Lane’ (Table 3), and flavor was sweet with relatively low muscadine aroma. The UGA breeding program uses berry penetration work and flesh maximum force as key measures for tender skins and firm flesh, respectively (Conner, 2013). Textural analysis of ‘RubyCrisp’ indicate that the berries had a firm flesh (4.5 N maximal force) and tender skins (11.4 mJ berry puncture work) (Fig. 2). This makes ‘RubyCrisp’ distinctly different from the other tested muscadine cultivars and more similar to the V. vinifera table grape cultivars Sugraone and Sugrathirteen. ‘RubyCrisp’ berries are attractive with a distinctive red color (Figs. 3 and 4) and have a good flavor.

Symptoms of Pierce’s disease (Xylella fastidiosa) have not been observed on ‘RubyCrisp’. Under a typical fungicide schedule, moderate levels of infection with bitter rot (Greeneria uvicola syn. Melanconium fuligineum) and ripe rot (Glomerella cingulata) were observed. Percent berry rot was less than ‘Hall’ and similar to the other check cultivars (Table 3).

‘RubyCrisp’ combines several rare traits for a muscadine cultivar which have led it to be a popular selection at field days and grower events. The red coloration of the berries is distinguishing and pleasing to most consumers. In addition, the tender skins and crisp flesh of this cultivar are similar to a V. vinifera fresh-market grape and add to its originality. Berries show good sweetness, but muscadine aroma and flavor is low. This is pleasing to some people who dislike muscadine flavor but unfavorable to others who do like the characteristic flavor of a traditional muscadine. Unfortunately, the tender skin of ‘RubyCrisp’ berries make it difficult to commercially pick without suffering relatively large losses due to berry split. Heavy rainfall can also lead to fruit cracking. However, the unique fruit quality traits of ‘RubyCrisp’ warrant its release as a home-garden and pick-your-own cultivar. Given the large berry size and high production potential of ‘RubyCrisp’, growers may need to limit vine fruitfulness by increasing the distance between fruiting spurs or thinning the crop so that the vine is not weakened by maturing excessive crops.

Ripe berries of ‘RubyCrisp’ muscadine on the vine.

Berries of ‘Fry’, ‘RubyCrisp’, and ‘Supreme’ in pint clamshell containers. 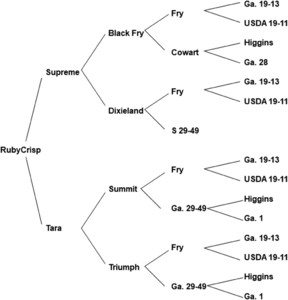 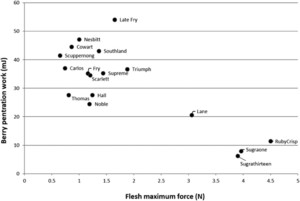 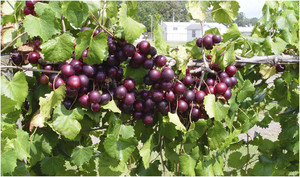