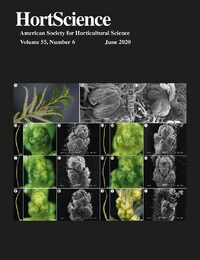 Typical ripe ‘Liberty Joy’ fruit on a tree (A) and freshly harvested without washing or any other treatment (B) in Byron, GA showing the size, shape, exterior, flesh, and pit in different views: back side and suture side (left top and bottom), blossom end and stem end (middle top and bottom), and longitudinal halves with and without the pit (right top and bottom). The square is about equivalent to 1 cm × 1 cm.