Chinese Torreya (Torreya grandis cv. Merrillii) is an important economic plant species and the main source of income for local farmers. This species is distributed in mountainous areas in southeastern China, particularly in Zhejiang, Anhui, and Fujian Provinces (Chen and Jin, 2019a; Li and Dai, 2007; Wu, 2013). The origin of the Chinese Torreya forest can be traced back to the late Tang Dynasty, which is more than a thousand years ago. It was developed from a quality tree species through grafting from ≈1500 years ago (Li and Dai, 2007). The seeds of this tree can be processed to produce nuts, which have been served as snack foods with some health effects (Chen and Chen, 2019; Chen and Jin, 2019a). The seeds have a high nutritional content, including proteins, fatty acids, carbohydrates, calcium, phosphorus, and iron (Li et al., 2005). The seeds also possess antioxidative and acute anti-inflammatory properties (Chen et al., 2006). Currently, the nuts cost ≈$50 to $70 per kg. Usually, one mature Chinese Torreya tree can bring an income of ≈$5000 from seed crops each year. Zhuji City (or County) of Zhejiang Province, which is within the central production area of Chinese Torreya, produces more than 1000 tons of nuts every year (Chen and Jin, 2019b). During the last years, more and more farmers have planted this tree species and produced nuts (People’s Government of Shaoxing City, 2013). With the increasing demand for seeds, scientific studies on the different perspectives for the growth of Chinese Torreya trees and seeds, including photosynthesis, drought tolerance, and nut quality, have been conducted (Hu et al., 2018; Lin et al., 2019; Zhang et al., 2017). However, there are high variations in the seed production of Chinese Torreya with time. So far, few studies have been conducted to analyze the dynamics of seed production for this important tree species at a community level.

Various life forms may obey a host of simple and systematic empirical scaling laws because all biological systems must transform energy and materials to support multiple life functions and structures (West, 1999). Power laws are considered as ubiquitous in nature and are broadly found in the distribution of rain droplet size, earthquakes, drainage area for rivers, and populations of cities (Bak, 1996; Gutenberg and Richter, 1956; Zipf, 1949). In statistics, a power law describes a relationship between two variables, in which a relative change in one variable results in a relative proportional change in the other variable: one varies as the power of another. Although there were fluctuations in seed production, trees were found to have reproductive consistency (Herrera et al., 1998; Koenig and Knops, 1998). Chen et al. (2017) found invariant scaling properties in cone production for longleaf pine in the southeastern United States. Thus, we may derive a hypothesis that there existed possible power laws in the seed production of Chinese Torreya.

The study sites are located at Zhaojiazhen in Zhuji City and the adjacent Jidongzhen in Shaoxing City, and both are in Zhejiang Province of China (Fig. 1). This region is within the major seed production area of Chinese Torreya. The data were from the book by Li and Dai (2007), but further analysis of the data were lacking. The information of seed yield at different times was collected from local town agencies by the book authors because 1) the seeds were picked up and weighted by local people every year; and 2) the seeds were expensive and the yield data should be accurate. The seed production data at Zhaojiazhen were from 1971 to 2006, and the data at Jidongzhen were from 1962 to 2002. Usually, Chinese Torreya trees were sparsely distributed within the natural vegetation. The exact covered area of Chinese Torreya trees each year at these two sites was not known; however, the change in the total area of Chinese Torreya was limited during these periods because the major industrial plantations were not established yet (Chen and Jin, 2019b). The covered area of Chinese Torreya was ≈3300 ha in Zhaojiazhen (Chen and Jin, 2019b) and 630 ha in Jidongzhen (Li and Dai, 2007). There were ≈32,000 trees with production in Zhaojiazhen and 21,000 trees in Jidongzhen (Li and Dai, 2007). Seedlings need to grow ≈10 to 15 years to produce first seeds, and young trees usually have limited seed production at the beginning. Thus, it could be assumed that seed production at the two sites was unaffected by the covered area or the number of trees during that time. There were high variations in seed production, which could reach ≈20- or even 40-fold at each site. The map distance between two sites in the mountainous area is only ≈10 km. Weather data were from local weather stations near the study sites. Beyond seed harvesting, the management practice during that time was minimal, which means nature mainly controlled the trees and forests.

The cv (standard deviation/mean) for seed production during different periods was calculated to facilitate comparisons between the two sites. Time periods included all time intervals from the beginning at each site. The average and sd were calculated for each year and the decade periods (the 1970s, 1980s…2000s). For the 2000s, only data from 2000 to 2006 were included.

After logarithm, log (Variance) = log (a)+ r × log (Mean). With the time increase of 1, 2 …. to n years from the time with seed production record, the scaling exponent (r) between the variance and average of seed production for Chinese Torreya was estimated at each site.

A method of multiscale entropy was applied to characterize and compare the patterns of seed production in Chinese Torreya based on available long-term data at Zhaojiazhen and Jidongzhen. Multiscale entropy is a method broadly used for analyzing the complexity of nonlinear and nonstationary signals in finite-length time series (Chen et al., 2005). In this study, entropy is defined as the Shannon entropy [Hε (x)] of seed production at different time scales of ε (length of years) as the following:

The percentage at different time scales (ε) is calculated by the following approach:

The Spearman correlation was conducted by SAS software (Version 9.3; SAS Institute Inc., Cary, NC), such as a correlation between the multiscale entropy of seed production and time scale. The estimated slopes were compared by a t test (Sokal and Rohlf, 1981). Statistical significance was discerned at P < 0.05.

The cv of seed production generally increased with the time scales before 1975 (Fig. 4A and B), but after that, cv became flat. There were breaks in the cv dynamics at both Zhaojiazhen and Jidongzhen. There was no general trend of increasing cv at different decades on both sites (Fig. 4C).

The multiscale entropy decreased with time scales at both Zhaojiazhen and Jidongzhen (Fig. 7A and B). There was no significant difference between the slopes of the fitting line (e.g., −1.1914 and −1.2398).

This pattern may indicate a carry-over effect, a trade-off from resource exhaustion when seed production is high (Crone and Rapp, 2014; Guo and Rundel, 1997; Guo et al., 2016), because the high seed production exhausts some critical resources (e.g., nitrogen) that need time for trees to restore. It appears that these results support the resource accumulation hypothesis (Kelly and Sork, 2002), although the exact resources are not known here. Spatial autocorrelation, also known as “Moran effect” (Moran, 1953), was observed in seed production for Chinese Torreya between Zhaojiazhen and Jidongzhen. Because this tree species lives in the mountainous area, the environmental conditions, such as soil, elevation, and microclimate, might change dramatically even within a short distance, which could affect spatial autocorrelation. More spatial data should be collected to study spatial autocorrelation in a large area.

By comparing the cv of seed production at different decades, our results did not support that cv in plant seed production increased over time (Pearse et al., 2017). This result is similar to the research on longleaf pine (Chen et al., 2018). It is understood that cv can quickly increase at the beginning and then become flat because of the fluctuation in seed production in the first several years. But it is not clear why cv trajectory suddenly changed at ≈1975 at both sites. The sudden high and low seed production could cause breaks in the cv trajectory. A potential explanation might be related to pollination or the decline of male trees. Local people once cut down male trees for timber because these trees did not produce seeds (Chen and Jin, 2019a).

Frequency power laws existed in seed production for Chinese Torreya at both Zhaojiazhen and Jidongzhen. Power laws represent a holistic measure of the “pace of life” because they link to the rates of many biological activities at various hierarchical levels of organization (Bak, 1996), such as these trees must transform energy and materials to support tree structure and seed production. Also, the scaling exponents (0.5229 and 0.9677) of these frequency power laws were quite different, and none of them followed a universal value (e.g., one-third or one-fourth). This result supports that scaling exponents of power laws can be a nonfixed value (e.g., Chen and Li, 2003; Kolokotrones et al., 2010).

Taylor’s Law in seed production existed only at Zhaojiazhen, and it was not significant at Jidongzhen. Taylor’s Law is considered to associate with long-range interactions among all components in a given system (Arruda-Neto et al., 2012). Because of limited information, it is not clear what occurred to the Chinese Torreya at Jidongzhen. The failure of Taylor’s Law may reflect diseases such as parasitism or epidemic infection (Lagrue et al., 2015). The exponent of Taylor’s Law was supposed to be between 1 and 2 (Marquet et al., 2005), but it was 2.5982 at Zhaojiazhen. An exponent higher than 2 may indicate deterministic and exponential growth (Ballantyne, 2005). Some previous studies also found that the exponents were not within the proposed range (Chen et al., 2017; Cohen et al., 2012). Taylor’s Law may inform our understanding of the resilience and change in Chinese Torreya at different sites.

Chinese Torreya is an essential economic tree species in some counties (or provinces) in China, but there are limited long-term data on seed production. It is necessary to start to record tree growth and seed production at different spatial scales (e.g., stand, village, and county) and also to establish permanent plots and set up observation at the ecosystem level. Based on the historical data at two sites in the central area of Chinese Torreya, some patterns in the dynamics of seed production were analyzed, and some useful information about this species could be inferred. The different results reflected the different perspectives (e.g., reproduction process and self-organization) of this tree species and its local ecosystems. Some results may provide theoretical information, and some may offer management strategies (e.g., temperature and water). Monitoring the dynamics of these indices across more sites under different environmental conditions could provide a better understanding of the responses of this species to management practices and environmental change.

The locations of study sites in Zhejiang Province of China.

Dynamics in the cv in seed production for Chinese Torreya at two sites (A, B), and during different decades (C).

Frequency power law in seed production for Chinese Torreya at Zhaojiazhen (A) and Jidongzhen County (B).

Taylor’s power laws in seed production for Chinese Torreya at Zhaojiazhen (A) and Jidongzhen (B).

Change of multiscale entropy in seed production for Chinese Torreya with time scales at Zhaojiazhen (A) and Jidongzhen (B). 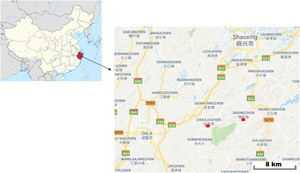 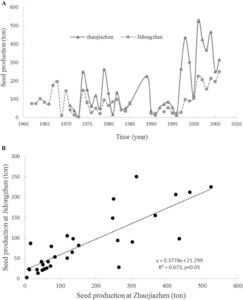 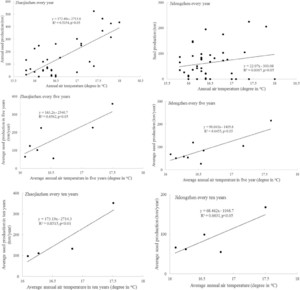 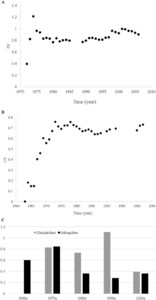 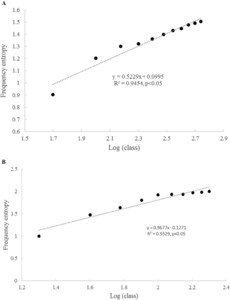 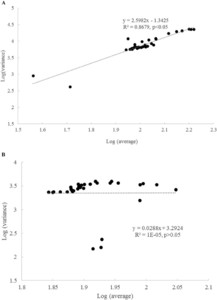 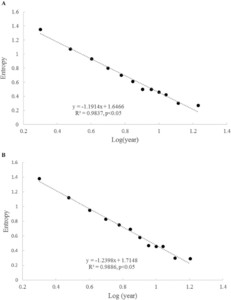