Plant trichomes are simple hair-like structures that extend from the epidermal surface of plants and are present on most terrestrial plants (Johnson, 1975). Trichomes increase the ability of the epidermal layer to moderate surface temperatures and reduce transpiration as the pubescence traps air, which effectively thickens the barrier between the epidermis and the environment (Schuepp, 1993). In addition to abiotic stresses, trichomes are known to protect plants against herbivores, insects, pathogens, and mechanical injuries (Barton, 2014; Halpern et al., 2007; Szymanski et al., 2000). Trichomes vary greatly in their morphology, but can be classified into two types: simple trichomes (nonsecreting) and glandular (secreting) trichomes (Wagner et al., 2004). In Arabidopsis (Arabidopsis thaliana), unicellular simple trichomes have proven to be great models for understanding cell fate and differentiation (Breuer et al., 2009; Marks et al., 2009; Wagner, 1991). Glandular or secreting trichomes are present in many vascular plants and are multicellular structures with secreting glands at the tip of the stalk, which often produce and store terpenoids, phenylpropanoid oils, and other secondary metabolites (Mahmoud and Croteau, 2002; Schilmiller et al., 2008; Wagner et al., 2004). Other epidermal outgrowths include thorns, prickles, and spines. Although these terms refer to botanically different structures with different features, all are commonly referred to as “thorns”; however, botanically, thorns are modified branches and spines are modified leaves, both containing adjoining vascular tissue. In contrast, prickles are formed by multiple cellular divisions of the epidermis and do not contain internal vascular tissue (Bieniek and Millington, 1967; Blaser, 1956; Coyner et al., 2005; Esau, 1977; Posluszny and Fisher, 2000). Most bramble research uses the term thorns to refer to these multicellular epidermal outgrowths, but for clarity and as correct botanic terminology, the term prickle for the presence of epidermal appendages and prickle-free for the absence is used in this manuscript.

The genus Rubus is an excellent member of the family Rosaceae to understand prickle initiation and development. Fruits of the genus Rubus, also known as caneberries or brambles, are an important source of cellulose, vitamin E, natural pigments, antioxidants, and phenolic compounds (Beattie et al., 2005). Prickles are an unappealing trait in red and black raspberry and blackberry (Clark et al., 2007), as well as in many wild Rubus species. Prickles complicate both fruit harvesting and field management (pruning, training). Because of this, there have been many efforts to use the prickle-free phenotype in breeding, thus resulting in the prickle-free cultivars such as ‘Joan J’ and ‘Glen Ample’ red raspberry (R. idaeus L.) (Finn et al., 2008), and ‘Natchez’, ‘Chester’ (Clark and Moore, 2008), ‘Apache’, and ‘Triple Crown’ blackberry (R. hybrid), among others. The prickle-free phenotype has long been sought after in blackberry sports of popular cultivars; however, combining the prickle-free trait with other important traits through traditional breeding approaches can be time-consuming and difficult because of polyploidy and/or high heterozygosity among the germplasm. Because the genus has both prickled and prickle-free cultivars with similar genetics, comparisons at both the morphological and molecular levels is possible in understanding prickle development. This knowledge is the first step toward the development of prickle-free versions of economically important cultivars using genome-editing techniques.

An analysis (Coyner et al., 2005) of prickle development using a blackberry prickle chimera provided a significant step in understanding how different embryonic layers (LI, LII, LIII) communicate for prickle formation. In the study, the chimeric blackberry, which produced prickles in only a few regions of the plant, was characterized. The results provided evidence of communication between epidermal and cortical cells for prickle development in blackberry. On the removal of outermost layer (LI-derived epidermal layer) of the prickle-free area, prickles were produced from the layer underneath (LII-derived cambial layer), suggesting the presence of molecular cues between the two layers. There have been additional studies in understanding morphological structures, histochemical features, origin, and genetic patterns of prickles in Rosaceous species (Asano et al., 2008; Kellogg et al., 2011; Rajapakse et al., 2001). Although prickles of red raspberry consist of only epidermal tissues, prickles of blackberry comprise both epidermal and cortical tissues but still lack vasculature (Kellogg, 2009). There is limited knowledge regarding the molecular pathways contributing to the prickle-free trait, which has hindered the application of modern molecular approaches to studying prickle development. To identify the molecular pathways controlling prickle development, a thorough understanding of prickle morphology in the genus is required to serve as the foundation for these additional studies.

All plant specimens were grown in the greenhouse at Cornell AgriTech, Geneva, NY. In addition, a controlled hybridization was made between ‘Joan J’ and ‘Caroline’ to obtain a population segregating for prickles. Seeds from this cross were collected, sterilized, and cultured in media for germination in a growth chamber. After germination, the seedlings were transferred to soil and grown in a growth chamber before transfer to a greenhouse. The population segregated almost perfectly 1:1 for the absence/presence of prickles. Images from all the individuals, including segregating progeny from the ‘Joan J’ × ‘Caroline’ population, were examined using a scanning electron microscope.

Tissues were collected at various stages of prickle development from fresh green to matured lignified brownish prickles. Samples were prepared using the procedure of Cornell Center for Materials Research, Cornell University, beginning with overnight fixation in ice-cold 2% glutaraldehyde in 0.05M cacodylate buffer, pH 7.4. The tissues were then rinsed with buffer three times for 10 min each followed by secondary fixation using ice-cold osmium tetroxide (OsO4) for 2 h. The samples were subsequently dehydrated through a series of ethanol soaks of 25% (10 min), 50% (10 min), 70% (overnight), 95% (10 min), and 100% (overnight). The samples were then critical point dried using dry carbon dioxide with exchange conditions of 10 °C at 3.4 atm (1 atm = 101.325 kPa) and then at 31 °C at 4.76 atm. The dried samples were sputter coated with gold (Desk IV cold sputter coater; Denton Vacuum, Moorestown, NJ) and viewed using an Aspex PICA 1020 scanning electron microscope (Aspex, Delmont, PA).

Comparisons were made within red raspberry samples as well as between different Rubus species. In red raspberry, the prickle development was compared between ‘Caroline’ and ‘Joan J’ and also among the prickled and prickle-free progeny obtained by hybridizing these two parents. Further comparisons were made between different Rubus species, which included red raspberry, blackberry, purple hybrid, black raspberry, and wineberry. The images shown in this article were selected from more than 400 images to best represent different stages of prickle development in all the species but are not necessarily the images used to measure the prickle dimensions.

Prickle height, basal width, and cell mass structure width in Rubus idaeus L. (red raspberry) ‘Caroline’ and prickled progeny at different maturity stages. Only cell masses are visible in at stage I, thus there are no stalk measurements.

Unlike prickled red raspberry, prickle-free ‘Joan J’ and progeny completely lacked cell mass structures indicative of the development of prickles. In the prickled types, the presence of cell mass structures and developing prickles were also observed in the underside of the leaves (Fig. 3A and B). In contrast, prickle-free ‘Joan J’ and progeny completely lacked these cell mass structures and developing prickles on the surface of the stem and underside of the leaves. Only a layer of simple, nonglandular trichomes was observed in these prickle-free types (Fig. 4A–D). Unlike Kellogg et al. (2011), an increase in the number of simple trichomes specific to prickle-free types was not observed, but rather variation among the samples.

Prickle height, basal width, and cell mass structure width in different Rubus species. Only the cell mass is visible at stage I, thus there are no stalk measurements.

Unlike red raspberry, blackberry, and black raspberry, cell mass structures were not observed on the stem or underside of the leaf in the purple hybrid. Moreover, this genotype had very few simple trichomes on the stem compared with the other species samples. Interestingly, the purple hybrid leaf samples showed a dense layer of simple trichomes. In addition, the images showed the presence of a cell mass on the side of many of what appear to be simple trichomes (Fig. 7A–D), which was not observed in any of the other species samples. Mature prickles were observed in the purple hybrid samples and the mean height and basal width of these was 3504 µm and 1211 µm, respectively (Table 2).

Prickled wineberry was included in this study because of its unique feature of developing simple nonglandular trichomes, glandular hairs, and prickles (Fig. 8A–C). In addition, the prickles develop a more pronounced curved shape (hook-like) unlike the other Rubus species in this study. Similar to red raspberry, cell mass structures associated with prickle development were observed, but these were also associated with the hair development. All of the different stages of prickle development were observed in wineberry. The mean height and basal width of matured prickles in wineberry were 3813 µm and 1242 µm, respectively (Table 2). The mean width of the cell mass structure at the tip of the developing prickle in stage II was 51 µm.

The association between cell masses and prickle development in purple hybrid was inconclusive because of the failure to find early cell mass structures on the stem of purple hybrid. Examination of additional samples would be required to confirm the relationship in the interspecific hybrids. Unlike red raspberry, black raspberry, and blackberry, no cell mass structures were observed on the stem or underside of the leaf in the purple hybrid. Many trichomes contained lumps on the side of the developing prickle that resembled the glandular cell masses observed at the tip of developing prickles in the other species. These lumps were not observed in any other species examined in this study and require further examination. It is possible that the interspecific nature of the genotype produces conflicting signals during the prickle and trichome development process that originate from the original species genomes. These potentially conflicting signals for cell mass development may result in partial detachment that does not hinder full prickle development. This may lead to a hybrid prickle and trichome development that differs from either of the progenitor species, R. idaeus L. and R. occidentalis L. Interestingly, the purple hybrid leaf showed a higher density of simple trichomes than either of the progenitor species samples in this study. This could be indicative of the hybrid nature of the genotype or natural variation between genotypes. Observation of additional hybrid genotypes is required to determine the explanation.

Wineberry (R. phoenicolasius) did show the association between the presence of glandular trichomes and prickle development. This species is both very hairy and develops prominent hook-shaped prickles. This mature prickle shape is unlike those of the other Rubus species in this study but not uncommon in the genus Rubus. Similar to red raspberry, many cell mass structures were observed in association with prickle development. Moreover, these cell mass structures were found to be associated with the dense layer of developing hairs observed in the images. All the stages of prickle development were observed in wineberry; however, the density of prickles is much lower than that of the surrounding glandular hairs. It is possible that a subset of hairs continues to develop into prickles through another genetic signal. The combination of glandular hairs and mature prickles is unusual in the genus Rubus. It is possible the hair development is similar in process to prickle development, although the literature suggests a different locus for the genetic control of hair development (Crane and Lawrence, 1931). Comparing prickled wineberry with the prickle-free type would have been more informative but was not possible because the prickle-free phenotype is not known to exist in the species germplasm. This circumstance warrants further investigation to elucidate the control of hair development.

Scanning electron micrographs of Rubus idaeus L. (red raspberry). (A, B) Developing and mature prickles on the underside leaf veins of ‘Caroline’ and prickled progeny. Note the dense layer of simple trichomes on the under leaf and vein surface. 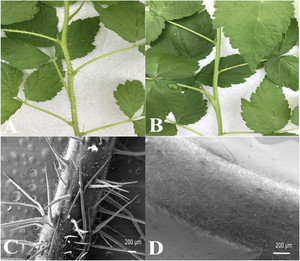 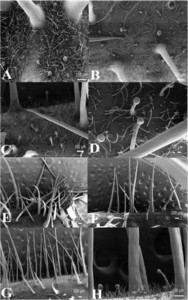 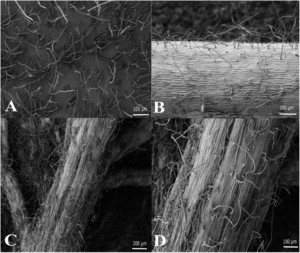 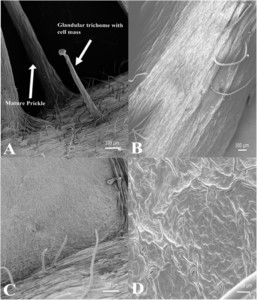 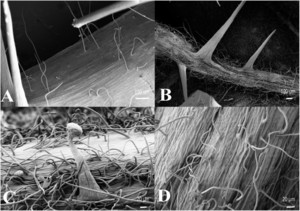 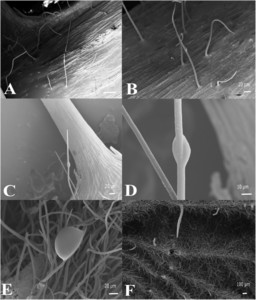 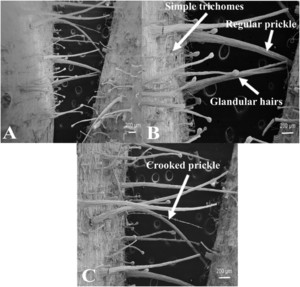 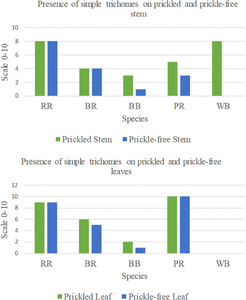