Herman is a new cultivar of Pinus cembra L. (common names include Swiss Stone pine, Arolla pine, Swiss pine, Stone pine, or Austrian Stone pine). Its lateral branches curve markedly upward and slightly inward, resulting in a narrowly erect, strikingly dense growth habit. ‘Herman’ (original selection) is ≈12 m in height with a spread of 4.5 m after 40 years. Average growth is 15 to 30 cm per year with typical average height of 3 m after 10 years. It is adapted to USDA plant hardiness zones 3 to 7 and performs well on a wide range of soil types. Pinus cembra is a five-needled pine with year-round rich-emerald-green color, with silvery-blue overtones. ‘Herman’ (Prairie Statesman®) is extremely cold hardy and drought tolerant, making it an excellent choice for an evergreen specimen planting in low-input landscapes without supplemental irrigation.

Pinus cembra is an evergreen coniferous woody tree in the family Pinaceae within the subgenus Strobus Lemmon, section Quinquefoliae Duhamel, and subsection Strobus Loudon. Other members of pines in the subsection Strobus include P. flexilis E. James (limber pine), P. sibirica Du Tour (Siberian pine), and P. strobus L. (eastern white pine). It is native to subalpine zones with elevations of 1200 to 2300 m (3500 to 7500 ft) above sea level in central Europe, from the Alps to the Carpathian Mountains, including Austria, the Czech Republic, France, Germany, Italy, Poland, Romania, Switzerland, and Ukraine (Farjon, 2017). Farjon (2017) reported this species to be classified with “least concern” status on the International Union for Conservation of Nature (IUCN) Red List of Threatened Species. There are several other cultivars available in the commercial nursery trade of P. cembra. These cultivars vary with needle color (blue-green, green, yellow-green, and silver-blue), growth habits (globose, conical, broad upright, and narrow upright), and growth rate and size (dwarf, intermediate, and large) (Table 1). ‘Herman’ is ranked in the intermediate class (15 to 30 cm per year/1.5 to 3 m after 10 years) with respect to growth rate and size. There are two other cultivars, Aurea and Westerstede, that are ranked in the intermediate class with ‘Herman’; both have different needle colors, yellow-green and blue-green respectively, and different growth habits, conical and broad upright respectively, as compared with ‘Herman’ with emerald-green foliage and narrow, upright form (Table 1). This distinct needle color, growth habit, and size, establish the uniqueness of Herman as compared with the other Swiss Stone pine cultivars. 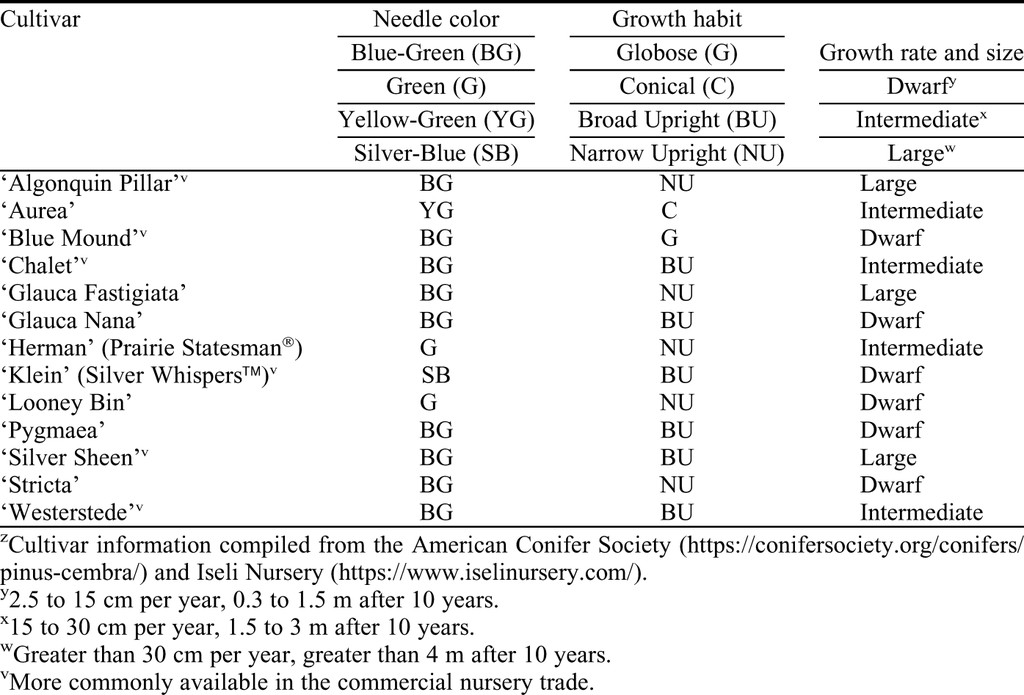 Needles of Pinus cembra are typically stiff, green-to-green-blue in color, and ≈5–9 cm long. Needles remain for 3 to 5 years, providing dense habit. First-year stem growth is covered in dense, orange pubescence, becoming grayish-brown in the second year. This is unlike first-year shoots of the closely related species, P. flexilis (limber pine), which is in the same subgenus, section, and subsection as P. cembra (Dirr, 2009). The bark is gray-green, darkening to gray-brown, and becoming scaly and fissured with age. Pinus cembra is monoecious, with female cones that are terminal and ≈5 to 7.5 cm long. Male (pollen) and female (seed) cones are not considered to have ornamental value. This species exhibits limited seed dispersal because the female cones do not open and dispersal is dependent on its main vector, the spotted nutcracker (Nucifraga caryocatactes L.), in its native range (Salzer, 2011). Three-year-old mature female cones will drop in the spring, with seed being released by birds or through decomposition of scales (Dirr, 2009).

This Swiss stone pine was selected from an open-pollinated seedling population from unknown European origin. It was selected from a population grown at the NDSU DEH Research Arboretum. This source of Pinus cembra has been evaluated since 1976, with one seedling being identified as uniquely different in 2002. ‘Herman’ was selected for its rich-emerald-green foliage and narrowly erect, dense growth habit, which is unique in the intermediate growth size along with the narrow upright habit (Table 1). ‘Herman’ was selected in soils that are classified as an Antler–Wyard loam with pH 8.0. The color of various plant parts was determined under natural light using the reprint of the Royal Horticulture Society (RHS) color chart (Royal Horticulture Society, 2015).

‘Herman’ is a unique seedling selection of Swiss stone pine (P. cembra), with lateral branches that curve upward with dense, rich-emerald-green foliage, compared with the species and other cultivars within the species (Fig. 1). The growth habit of this selection does not require any pruning to maintain the upright form. After 40 years, ‘Herman’ is ≈12 m high by 4.5 m wide. Mature growth parameters listed for the species as 21 m in Hortus Third (Liberty Hyde Bailey Hortorium, 1976), while Dirr (2009) mentions that mature height is ≈9 to 12 m and occasionally reaching 21 m. ‘Herman’ is ranked as an intermediate with growth rates ranging from 1.5 to 3 m after 10 years, with average size of commercially propagated and growth ≈3 m. This classifies ‘Herman’ on the larger side of the intermediate growth-rate spectrum. ‘Herman’ is hardy to USDA plant hardiness zone 3 and has survived recorded temperatures of −38 °C (1994, 2018). Foliage is a high-quality emerald-green (RHS green group 141A) with silver undertones from stomatal lines (RHS blue group 106D) (Fig. 2) year round. Needles of ‘Herman’ do not exhibit any winter discoloration, including winter needle burn as seen in other Pinus species. ‘Herman’ has exhibited no symptoms of chlorosis growing on a soil pH in excess of 8.0, which is typical of other Pinus spp. within the subgenus Strobus, such as eastern white pine (P. strobus) (Gilman and Watchson, 1994). Needles are borne in fascicles of five and are stiffer than white pine. Herman needles are emerald-green, which is a unique trait because most cultivars have a blue-green foliage. The needles of ‘Herman’ are ≈7.5 to 18 cm long, which is longer than the typical needle length, 5 to 7.5 cm for the other species, with four silver stomatal lines.

The bark of ‘Herman’ is ornamental but not readily visible as a result of the dense foliage. The mature bark is exfoliating, with the outer layers being greyish-tan (RHS grey-brown group 199A/B), with inner bark being greyish-reddish-orange (RHS greyed-orange group 177C).

Reproductive (pollen and seed) cones are not considered to have ornamental value. Pollen cones are broadly ellipsoid-cylindrical shaped, colored orange (RHS greyed-orange group 166D), and measure 8 mm wide and 20 mm long. Seed cones are ovoid, located terminally on branches, and colored brownish-grey (RHS grey group 201A) at maturity. They are resinous and mature 3 years after pollination.

Resistance to pest and stress.

‘Herman’ has shown to be a relatively pest-resistant and stress-tolerant pine cultivar in long-term trials conducted at the NDSU Research Arboretum. Pinus cembra cultivars including ‘Herman’ have few problems, with strengths including good resistance to white pine blister rust (Stephan, 2004), tolerance to drought (Anfodillo et al., 1998; Tomaskova et al., 2017), as well as resistance to foliage needle burn as a result of low winter temperatures (NDSU DEH Research Arboretum observations, data not reported). In Spring 2019, observations were made on Pinus spp. for foliage winter burn at the NDSU DEH Research Arboretum. These observations showed that this species, including ‘Herman’ and other P. cembra cultivars, was the only pine species that did not have any foliage burn resulting from winter temperatures reaching −38 °C.

Pinus cembra cultivars are side- or veneer-grafted onto P. strobus (eastern white pine) rootstocks. Pinus cembra grows too slowly to be used as a rootstock. ‘Herman’ has been propagated successfully using grafting. To date, there have been no hardiness or chlorosis issues with P. cembra cultivars grafted onto P. strobus in research or landscape evaluations (NDSU DEH Research Arboretum and landscape observations, data not reported).

‘Herman’ is sold under the trademark Prairie Statesman® (U.S. Trademark Reg. No. 2,935,955, registered 29 Mar. 2005) and is available for nonexclusive licensing. For more information, contact the NDSU Research Foundation, 1735 NDSU Research Park Drive, Suite 124, Dept. 4400, P.O. Box 6050, Fargo, ND 58108-6050; phone: (701) 231–6681. Plant material for vegetative propagation can be obtained from NDSU Department of Plant Sciences Woody Plant Improvement Program or designated nursery, subject to availability. There is a horticultural royalty of $0.75 per plant through the NDSU Research Foundation. ‘Herman’ is available from several commercial nurseries, including, but not limited to, Iseli Nursery (Boring, OR), Oregon Pride Nurseries (McMinnville, OR), and Sester Farms Inc. (Gresham, OR). 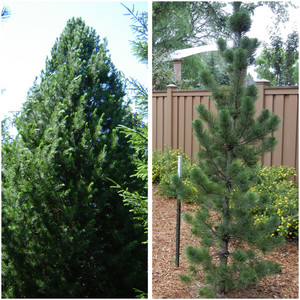 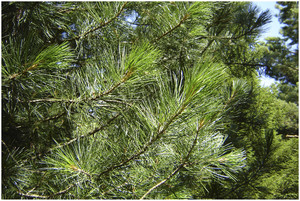