‘Shiny Star’ is a cold-hardy seedless table grape developed by the Rural Development Administration (RDA) grape breeding program in Korea. In recent years, table grapes from Chile and the United States have been increasingly imported to Korea. The imported grapes are seedless and have nonslippery skin. Korean consumers prefer grapes with those traits rather than the traditional Korean cultivars, which are seeded and have more slippery skin. The imported cultivars are not suitable for cultivation in Korea because of the hot and humid summers and cold winters. ‘Shiny Star’ meets the demands of both consumers and producers in Korea. The cultivar Himrod is the seedless pollen parent of ‘Shiny Star’, which has greater cold hardiness than ‘Himrod’. ‘Shiny Star’ has yellow berries with soft flesh, nonslippery skin, a foxy flavor, and a mean weight of 3.8 g. ‘Shiny Star’ is not prone to berry shattering or cracking during storage or postharvest transportation, thereby increasing its marketability.

The cold hardiness of the shoot was estimated by measuring electrolyte leakage (EL) using the methods described by Arora et al. (1992) and Lee et al. (2013) with slight modifications. Fifty 10-cm shoots were excised from five separate vines (10 shoots per vine) of each cultivar. The excised shoots were rinsed under cold distilled water. Then, each shoot sample was placed in a 50-mL test tube containing 1 mL distilled water. The test tubes were placed in a chamber (VS-1203P4S-3C; Vision Scientific Co. Ltd., Seoul, Korea) and cooled to the target temperature at a rate of 2 °C/h. Control shoots were placed in a refrigerator for 2 h. Six target temperatures ranging from −6 to −36 °C were used. The test tubes were maintained at each target temperature for 2 h. Each shoot was then cut into seven 1-cm segments. All seven segments were then placed in a single 15-mL test tube containing 8 mL distilled water and vacuum-filtrated for 1 min. The tubes were then shaken on an orbital shaker (Supertech; Seoulin Bioscience, Seoul, Korea) at 125 rpm for 24 h at room temperature. The electrical conductivity (EC) of the liquid contents of the tubes was then measured using an EC meter (Model 1461-81; Cole-Parmer, Vernon Hills, IL). The tubes were autoclaved at 120 °C and 117.2 kPa for 30 min, and the EC was measured again. Membrane injury (%) in the samples was calculated according to the method of Arora et al. (1992) as:
where % EL(t) and % EL(4°C) are the ratios of the initial EC to final EC of shoots incubated at each target temperature (t) and of the nonfrozen control shoots (4 °C), respectively. The percentage membrane injury data were adjusted according to the method of Lim et al. (1998). Samples treated by extreme freezing at −80 °C in an ultra-low-temperature freezer (WiseCryo; Daihan Scientific, Seoul, Korea) were considered 100% freeze-injured samples. The injury percentage was transformed as follows:

Using the adjusted injury percentage data, the temperature at which the rate of injury was greatest (Tmax) was calculated using the Gompertz function (Lim et al., 1998).

‘Shiny Star’ has perfect, self-pollinating flowers. The flowers bloom late in the season (approximately 7 June in Suwon, Korea) after a late-season budbreak (1 May).

Characteristics of three table grape cultivars grown in Suwon, Korea, from 2012 to 2015.

The average cluster weight of ‘Shiny Star’ is 330.8 g. The clusters are conical, sometimes cylindrical, and the berries are set tight in the cluster (Fig. 2). The uniform shape and yellow skin color of the berries result in an excellent cluster appearance. The harvested clusters were stored at −2 °C with ≈70% to 80% relative humidity for 2 months. Berry shattering and cracking rarely occurred during storage. Six-year-old ‘Shiny Star’ vines yielded ≈21,400 kg/ha. In comparison, the yields of ‘Himrod’ and ‘Campbell Early’ were ≈14,600 kg/ha and 24,100 kg/ha, respectively.

‘Shiny Star’ vines with their own roots had slightly vigorous growth. The vines had a uniform cluster size and ripening period as a result of spur pruning. The vines were observed to be moderately resistant to downy mildew (Plasmopara viticola Berl. & de Toni) and resistant to powdery mildew (Erysiphe necator Schw.) during cultivation.

Cold hardiness of the shoots of the three table grape cultivars.

‘Shiny Star’ was registered at the Korea Seed and Variety Service in 2018. Requests for nonindexed cuttings for research purposes may be addressed to Youn Young Hur (E-mail: yyhur76@korea.kr). 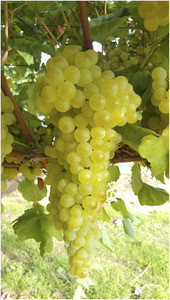