Crabapple is a common name for Malus domestica with bitter fruit under 5 cm in diameter of various wild species of Malus (Guo et al., 2009). These small-fruited species are mainly distributed in the northern temperate zone spanning Eurasia and North America. China is the largest genetic resource of crabapples, with a cultivation history of more than 2000 years (Li, 2001; Qian, 2005). Crabapples, together with peonies, plum blossoms, and orchids, are known as the “four outstanding flowers in spring” in China (Wang, 2010; Wang et al., 2015). They have been cultivated as ornamentals in China since the Han Dynasty (202 BC) and are esteemed by professional and amateur gardeners. Crabapples from China were introduced to Europe and the Americas in the 18th century. Breeding had produced ≈1000 crabapple cultivars, of which approximately half are from Canada and the United States (Dirr, 2010).

Crabapples have become an important ornamental tree in gardens and landscapes because of their diverse flower, fruit, and leaf colorations. Of the nearly 1200 crabapple taxa recorded by Fiala (1994), less than 5% of them are the semi-double or double flowers, such as the outstanding ‘Van Eseltine’ (pink doubles), ‘Kelsey’ (red doubles), ‘Diamond’ (red–purple doubles), and ‘Brandywine’ (pink doubles). During the past 20 years, only two double-flower crabapple cultivars, ‘Spring Bride’ (Spongberg, 1996) and ‘Jarmin’ (Jarmin, 2003), were released to the market in the United States. In China, there are only two double cultivars, ‘Fenghong Nichang’ (Fan et al., 2019) and ‘Fen Balei’ (Zhou et al., 2019), that have been released recently.

In 2011, ≈1800 open-pollinated fruits were collected from ‘Purple Prince’, ‘Indian Summer’, ‘Red Jade’, ‘Harvest Gold’, ‘Donald Wyman’, ‘Sugar Tyme’, Malus ×zumi ‘Calocarpa’, ‘Qian Cengjin’, and M. ‘Cinderella’. Unfortunately, all the seeds were mixed during seed cleaning. Then, 8000 seedlings were evaluated at the National Crabapple Germplasm Genetic Center. This center is located in Yangzhou, Jiangsu (lat. 32°42′N, long. 119°55′E). It belongs to a subtropical monsoon climate with four distinct seasons. The average annual temperature is ≈14.9 °C, and the average annual precipitation is ≈1000 mm. In Spring 2014, one seedling with deep, cup-shaped, white flowers was selected and evaluated in 2015 and 2016; subsequently, it was named ‘Yangzhi Yu’ (‘Yangzhi Yu’ in Chinese means white jade; we compared white flowers to jade) (Fig. 1). From 2014 to 2017, it was bud-grafted to M. hupehensis seedling rootstocks. The grafted seedlings grew vigorously and exhibited good adaptation to high temperatures. There were no serious pests or diseases after 5 years of plant performance, including apple scab and fire blight.

‘Yangzhi Yu’ has double, white, deep-cupped flowers (Fig. 1B). ‘Yangzhi Yu’ most resembles ‘Van Eseltine’. M. ‘Van Eseltine’ is the offspring of M. ×arnoldiana and M. spectabilis; it has pinkish double flowers and is often used in landscapes and gardens (Zhou et al., 2018). The unopened flower of ‘Yangzhi Yu’ is light pink and the petal color of the middle zone of the outer side is red–purple (RHS-62C) (Royal Horticultural Society, 2007). In addition, the pedicel is short (Table 1). The tree has grey–green branches and an upright canopy (Fig. 1A), reaching ≈3 m in 6 years. Bloom (10% open flowers) initiates in early April in Yangzhou, Jiangsu (lat. 32°42°N, long. 119°55′E). The umbellate inflorescence has light pink buds (Fig. 1B); the flowers are double, with 15–20 petals and a diameter of 4.5 ± 0.3 cm. Corollas usually have a deep, cupped shape. Petals are broad, elliptical, overlapping, and without prominent venation. The petal color of the inner side is white (RHS-NN155D) and the outer side is red–purple (RHS-62C). Fruit set is medium and fruits are small (diameter of 1.4 ± 0.2 cm), globose, and with deciduous calyx. Fruit peduncles are long (3.2 ± 0.4 cm in length). The predominant color of the fruit is yellow–green (RHS-153B) (Fig. 1C). Fruits persist for ≈5 months. Foliage is green, thin, leathery, and elliptic, with measurements of 7.6 ± 0.5 cm in length, 3.5 ± 0.5 cm in width, with a length-to-width ratio of 2.2 ± 0.2. The leaves all shed in early September, and the color before falling off is yellow–green. The leaf petiole is 3.0 ± 0.4 cm, without lobes, has serrated margins, and medium green without anthocyanin coloration.

‘Yangzhi Yu’ performs best in full sun and fertile sandy soils with good drainage. It is assumed to be suitable for planting in USDA Cold Hardiness Zones 4–9. The plant has been mainly propagated by budding with M. hupehensis as the rootstock (diameter >0.5 cm) from August to September in Jiangsu, China. No serious pests and diseases have been observed in ‘Yangzhi Yu’ when tested in Yancheng (lat. 31°57′N, long. 118°29′E) and Nanjing (lat. 32°08′N, long. 120°43′E) in Jiangsu. 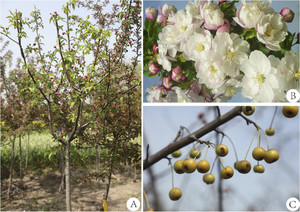