Three sources of the dominant Ms allele were used for this research:

Testcross progenies were scored as male fertile vs. sterile by visual examinations of flowers looking for plumb anthers and presence of pollen. Onion flowers are protandrous and pollen matures before the style elongates and the stigmatic surface becomes receptive (Currah and Ockendon, 1978). In each flower, there are two whorls of three anthers each; the inner whorl dehisces first, followed by anthers in the outer whorl. We visually examined flowers in which the inner whorl appeared to be dehiscing or if mature, we scored the outer whorl of anthers before the style had fully elongated. Flowers in umbels were visually scored three times before flowers had elongated styles and dry anthers. Anthers were harvested when 40% to 50% of the flowers of the umbels had dehisced. At two different times for each plant predicted to be male fertile based on the molecular markers, two samples of 10 anthers were randomly collected from flowers with dehiscing anthers across the umbel and pollen was stained with 1% acetocarmine. One hundred pollen grains from each sample were scored as stained (strongly staining nuclei with cytoplasm) vs. nonstaining (little to no stain visible) using a light microscope (Heslop Harrison, 1992). Pollen germination was estimated by incubation on the medium reported by Gomes et al. (2000) modified with 200 g·L−1sucrose and 50 mg·L−1 boric acid for 7 d at 24 °C, during which 100 pollen were scored as germinated with pollen tubes vs. no tubes.

Acetocarmine staining of pollen from the three testcross families revealed significant differences for stainable pollen among progenies possessing dominant Ms allele(s). The two-way ANOVA for the percentage of stainable pollen revealed that the testcross family and the family-by-environment interaction were highly significant (P < 0.001), and the environment was just below the significance level (P = 0.0571). Across the three environments, the percentage of stainable pollen on male fertile testcross progenies from Ski was very high at 98.4% to 99.6% and slightly lower at 82.1% to 99.1% for AC (Figs. 3 and 4, Table 1). B2354B showed significantly lower stainable pollen at 13.1% to 68.3% (Figs. 3 and 4, Table 1). The correlation between the percentage of stainable pollen and germination was significant (P < 0.001), although it was only 0.45. Other researchers have reported low correlations between pollen germination and stainability using acetocarmine, cotton blue, or fluorescein diacetate (Ali et al., 1984; Ockendon and Gates, 1976a, 1976b). Overall, these previous studies reported pollen germination rates of 50% or less, and it is not clear if the low germination was due to the medium type, amounts of sucrose and/or microelements, or other factors (Gomes et al., 2000; Ockendon and Gates, 1976a). Therefore, staining of onion pollen must be considered as an indication of pollen quality, but not viability.

Mean percentage (%) of stainable pollen from male fertility-restored testcross progenies from onion lines B2354, AC, and Ski across greenhouse and field environments. 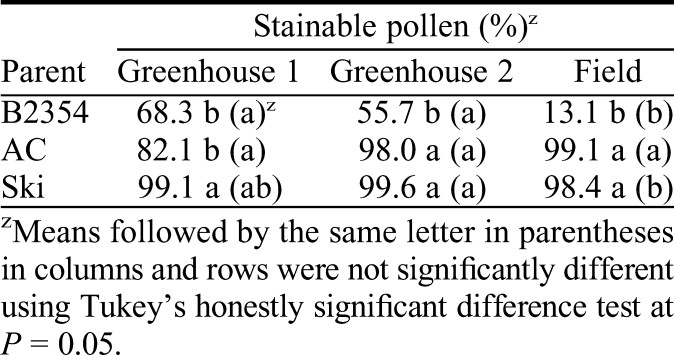 In conclusion, we observed that dominant Ms alleles from different sources are associated with significantly different amounts of stainable pollen (Table 1), thus complicating visual selection against the male fertility restoration allele at Ms. The accD cytoplasmic marker together with the AcPms1 nuclear marker correctly predicted male sterility across all three populations, although not necessarily male fertility restoration. Although Khar and Saini (2016) observed that these markers were not completely accurate in germplasm from the Indian subcontinent, we can recommend their use for marker-aided selection of maintainer lines for onion populations of European or North American origins (Havey and von Kohn, 2017) toward the development of male sterile inbred lines for the production of onion hybrids.

Pedigrees of testcross progenies from selections of ‘Ailsa Craig’ (A), ‘Sapporo-Ki’ (B), and B2354B (C) scored for male fertility restoration across environments. CMS-S is a cytoplasmic male sterile line or plant; N indicates normal male fertile cytoplasm. Ms and ms are the dominant and recessive alleles, respectively, at the nuclear Ms locus.

Acetocarmine-stained pollen from male fertility-restored testcross progenies from (A) Ski, (B) AC, and (C) B2354.

Boxplots of the percentage of acetocarmine-stained pollen from umbels of male fertility-restored testcross progenies from Ski, AC, and B2354 grown in three environments. 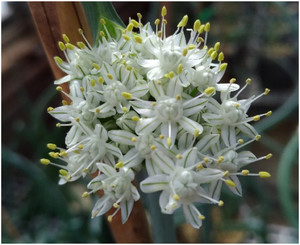 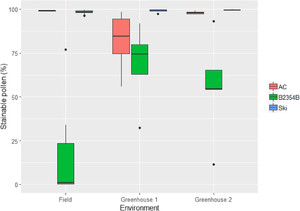