Search for other papers by Akide Özcan in
Google ScholarClose

The objective of this study was to analyze the effects of low storage temperatures on the quality of pollen obtained from the sweet cherry cultivars 0900 Ziraat, Regina, Starks Gold, and Sweet Heart. The pollen was stored at 4 °C, –20 °C, and –80 °C for 12 months, and its viability and germinability were determined at 3-month intervals. The results demonstrated that the initial pollen viability varied between 73.62% and 79.37%, while pollen germinability varied between 41.24% and 53.56%. The percentage of pollen viability declined remarkably from the third to 12th month by almost 3% in 4 °C storage. The pollen viability for the other two storage temperatures (–20 °C and –80 °C) was greater than 50% by the end of the 12th month. It can be concluded that the pollen quality of these cultivars can be preserved sufficiently at temperatures less than –20 °C.

It is of vital importance to reach high qualities and substantial levels of efficiency per unit area when managing commercial fruit orchards. Therefore, orchards should receive regular attention with regard to parameters that can maximize their economic productivity. In addition, it is important for fruit growers to familiarize themselves with the biology of fertilization, especially in relation to the specific cultivars in their orchards, whereby necessary precautions should be considered accordingly (Ajamgard et al., 2017; Özcan et al., 2017; Paydas et al., 1997; Stösser et al., 1996; Sütyemez, 2007; Sütyemez and Eti, 1999).

Apart from some cultivars that yield parthenocarpic fruit, pollination and fertilization need to be studied closely if fruit yield is to be maximized. The first criterion to these processes is the natural development of organs in flowers and the continuous production of pollen with a high percentage of viability (Eti, 1991; Griggs et al., 1971; Linskens, 1964; Norton, 1966; Ozcan et al., 2019; Stanley and Linskens, 1974, 1985; Sütyemez and Eti, 1995; Tosun and Koyuncu, 2007). Pollen quality heavily influences the level of fertilization and the amount of fruit set in different cultivars (Eti, 1990, 1991; Stösser, 1984; Sütyemez, 2007).

In addition to the selection of a main cultivar to be planted in a sweet cherry orchard, the existence of a suitable pollinizer is also of utmost importance. The flowering period of the selected pollinizers should coincide with that of the main cultivar. The pollinizers should produce a sufficient amount of pollen and should not display incompatibility. Therefore, the viability and germinability of pollen should be high to have successful fertilization. The viability and germinability of pollen are also influenced by environmental conditions and particularly temperature (Bolat and Pırlak, 1999; Eti, 1991; García and Egea, 1979; Ozcan et al., 2019; Polito and Luza, 1988; Sadat Hosseini Grouh et al., 2011; Stösser et al., 1996; Tosun and Koyuncu, 2007; Visser, 1955).

Although some cherry varieties are compatible with each other, they do not bloom during the same period. Therefore, significant decreases may be seen in fruit set. The preservation of pollen in cherry orchards and using it in artificial pollination the following year may be an alternative to this problem. In addition, no research on pollen quality based on storage of cherry pollen at chilling temperatures has been recorded.

This research was carried out between 2017 and 2019. Pollen was collected from four different cultivars: 0900 Ziraat, Regina, Starks Gold, and Sweet Heart.

Sufficient numbers of ripe flower buds were collected from the trees just before bloom. The stamens on these flowers were removed and laid on a piece of glossy paper under a 50-W bulb for one night at room temperature. This led to the bursting of the stamens. Then, the viability and germinability of the pollen was measured and recorded on the first day.

The pollen of the four different sweet cherry cultivars was stored at different temperatures (4 °C, –20 °C, and –80 °C). Their viability and germinability were measured every 3 months for 12 months.

A 1% solution of 2,3,5 triphenyltetrazolium chloride (TTC) was used for measuring pollen viability (as a percentage) on two different microscope slides for each cultivar (Norton, 1966). For microscopic analysis, small drops of TTC were poured onto each microscope slide. The pollen was put on the slides and then a cover glass was placed on each slide.

Pollen germinability tests were carried out in vitro using the agar-in-petri method at a fixed temperature of 20 °C (Stanley and Linskens, 1985). Taking a previous study (Sütyemez and Eti, 1995) into account, only 15% sucrose concentration was added to 1% agar, according to the agar-in-petri method. Pollen viability and germinability tests were repeated twice for each cultivar and treatment. Pollen was counted in four randomly selected regions of each microscope slide (Sütyemez and Eti, 1995).

The SAS software program (version V.8; SAS Institute, Cary, NC) was used for determining analysis of variance of data based on the randomized block design. Tukey’s test was used for comparison of mean values.

Pollen viability of four sweet cherry cultivars stored at three storage temperatures for up to 12 months.

Furthermore, the most substantial loss of pollen viability was observed in ‘0900 Ziraat’ at all three different temperatures, whereas the least percentage of loss was observed in ‘Starks Gold’. These findings demonstrate that the percentage of pollen viability was maintained agreeably when stored at –20 °C and –80 °C, an indication of fertilization in sweet cherry pollen.

Pollen germinability of four sweet cherry cultivars stored at three storage temperatures for up to 12 months.

At the end of this study, pollen germinability was lost most substantially in the pollen of ‘0900 Ziraat’ at all storage temperatures, followed by the pollen of ‘Sweet Heart’.

The current study aimed to measure the pollen quality of four sweet cherry cultivars during and after storage at different temperatures. The findings demonstrate that all pollen rapidly lost viability and germinability when stored at 4 °C. Losses were also observed in pollen that was stored at other temperatures (i.e., –20 °C and –80 °C), but these losses were not as devastating. As reported in a previous study (Polito and Luza, 1988), the decrease can be attributed to the negative effects of cell lesions that occur when pollen freeze and dissolve in extreme subzero temperatures.

This study contains valuable findings in terms of the period in which sweet cherry pollen are stored. As far as the pollen quality of the different sweet cherry cultivars is concerned, significant differences were observed between the measured values at different storage temperatures and durations.

This study, which focused on the storage of pollen taken from different sweet cherry cultivars, indicated that sweet cherry pollen, in general, can be stored acceptably at temperatures less than 0 °C for 12 months. The findings obtained are very important in terms of eliminating the pollination problem of cherry varieties that do not have compatibility problems but do not bloom during the same period. This would not lead to significant problems in the fertilization process. 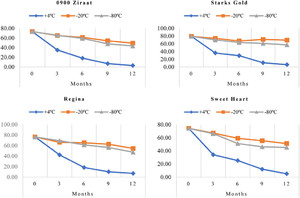 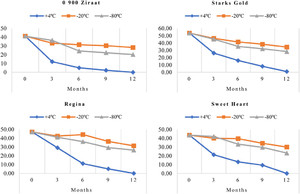 Search for other papers by Akide Özcan in
Google ScholarClose