Decreasing honeybee (Apis mellifera L.) populations are becoming a nationwide concern with numerous consequences, including inadequate pollination of several crop species (Calderone, 2012; Gallai et al., 2009; Kevan and Phillips, 2001). Therefore, it is important to investigate crop production systems that incorporate companion plantings that attract honeybees and other pollinators to agricultural crops. Even though a diverse plant community is important to support and maintain pollinator populations, these conditions are lacking from many heavily managed farm and urban landscapes (Williams et al., 2010; Winfree et al., 2011). Therefore, increasing biodiversity with the addition of pollinator-attracting plants adjacent to crop species could result in larger and more diverse populations of pollinators around those crops.

Even though the addition of companion plantings to crops has been known to increase insect diversity, further research is needed to determine if crop yield can also be reliably increased in those systems (Haaland et al., 2011). Similarly, to support more abundant and diverse pollinator populations and simultaneously improve crop yields, research has suggested that the planting of floral restoration plant varieties to attract pollinators and help “export” them to adjacent crop fields can be effective (Morandin and Kremen, 2013). However, the selection of proper companion plants that flower in synchrony with a particular crop and meet the requirements of the particular growing conditions of the region needs to be investigated more extensively to maximize pollination and crop yield (Quinn et al., 2017).

Across heterogeneous landscapes, pollinator abundance and pollinator diversity typically correlate with floral diversity and density (Potts et al., 2003). Julier and Roulston (2009) found that, provided a farm was not located in an intensively farmed region, wild pollinators alone were sufficient to pollinate pumpkin (Cucurbita pepo L.) crops. Therefore, the following question arose: would adding pollinator-attracting plant species, thereby transforming a given area into a more heterogeneous landscape, attract sufficient pollinators to successfully pollinate a crop without the addition of managed honeybee hives? Previous studies have investigated similar questions, but none has directly quantified differences in yield. Barbir et al. (2015) tested multiple herbaceous plants, including borage (Borago officinalis), to find suitable plant species in Spain with the ability to attract pollinators in agro-ecosystems. Carreck and Williams (2002) found that the addition of annual flowering plants (including B. officinalis) to noncropped areas of field production provided nectar and pollen sources to pollinators, even during the offseason. Thom et al. (2016) found that the addition of oilseed crops, including borage, to soybean [Glycine max (L.) Merr.] and maize (Zea mays L.) crops provided a supplemental nectar resource for pollinators and a high-value crop for farmers.

Frogfruit (Phyla nodiflora), an herbaceous perennial groundcover, is widely known regionally as a pollinator-attracting plant (Redhage and McDermott, 2015). Salvia farinacea ‘Henry Duelberg’ is a reliable herbaceous perennial sage originating in Texas that is known for its butterfly-attracting season-long blooms (Texas Superstar Program, 2016). Sea oxeye (Borrichia frutescens) is tolerant of periodic flooding and salty high pH soils; it is a small evergreen to semi-evergreen shrub native to the southern U.S. coastal regions that attracts pollinators (Gilman, 1999). Kidneywood (Eysenhardtia texana) is a small deciduous shrub that is native to Texas and is known for its recurrent flushes of pollinator-attracting flowers (Arnold, 2008). In addition to borage (B. officinalis), which was previously discussed, annual pollinator-attracting plants with small to medium statures reported to attract pollinators and grow well in gardens of the region include cosmos (Cosmos bipinnatus), zinnias (Zinnia ×marylandica), and basil (Ocimum basilicum) (Arnold, 2008).

Cucumber is highly dependent on pollinators for fruit set (University of Georgia Honey Bee Program, 2019). Increased visitation of pollinators has been shown to increase fruit set of C. chinense (Cauich et al., 2006). Several cultivars of cucumbers are commercially grown in Texas (Masabni, 2010). Cucumbers and peppers are among the more popular vegetables for residential gardeners in Texas (Cotner, 1998). Texas ranks third in national production of hot peppers (Food and Drug Administration, 2016). The objective of this study was to evaluate the impact of pollinator-attracting perennial plants compared with both pollinator-attracting annual plants and plots lacking pollinator-attracting plants (control plots) on cucumber (Cucumis sativus) and habanero (Capsicum chinense) crop yields and fruit quality.

The greenhouse production portion of this experiment was conducted at the Texas A&M University Horticultural Teaching, Education, and Research Center (HortTREC) in College Station, TX (lat. 30.52°N, long. 96.43°W) in Fall 2016, Spring 2017, and Fall 2017. Greenhouses were equipped with automated shade cloths that closed to provide 44% light exclusion when light sensors exceeded 750 μmol. Minimum and maximum temperatures during the experiments were recorded (Table 1).

Plots were established on clay soil with 8.2 pH in Burleson County, TX. A USDA soil survey classifies the soil as Burleson clay, described as “clayey, very deep, nearly level to gently sloping, moderately well drained soils that are slightly alkaline” (USDA, 2014). Irrigation water was provided from an on-site well containing water with 6.9 pH and 1074 mg·L−1 of total dissolved salts. Before each planting, field plots were fertilized with a 17N–7.4P–14.1K fertilizer (Brazos Best Fortify; Producers Cooperative Assoc., Bryan, TX) at a rate of 0.90 kg N per 93 m2 (2 lb N per 1000 ft2). The areas separating the plots were sown with bermudagrass [Cynodon dactylon (L.) Pers.] and mowed to a height of 10 to 15 cm (4–6 inches) to minimize pollinator-attracting plants in these intervening spaces. Frequency of pollinator visitation was estimated for each crop species and pollinator-attracting companion species during each cropping cycle as reported by Montoya (2018).

The annual pollinator-attracting companion planting treatment was planted with three 12.2-m-long (40-ft) × 1.5-m-wide (5-ft) rows containing vegetable crop species interplanted with annual companion plants (Fig. 1A). Annual companion plant species rows were interplanted with vegetable crop species at 30.5- to 45.7-cm (12- to 18-inch) spacings. Vegetable crops were planted as described for the control plots. Spacing between rows was 1.5 m (5 ft). Plants were planted on black plastic mulch and irrigated with a dual dripline (T-Tape Model 505) as needed to maintain turgidity. Annual plant species were all in flower or beginning flowering when planted to the field and flowered throughout the cropping cycle (Fig. 1A).

The perennial pollinator-attracting companion planting treatments were planted within a 12.2-m-long (40-ft) × 1.5-m-wide (5-ft) row containing four perennial pollinator-attracting companion species. Adjacent to this row were two 1.5-m-wide (5-ft) rows in which vegetable crop species were grown as described for the control plots (Fig. 1B and C). Spacing between rows was 1.5 m (5 ft). Perennial companion plant species field rows were planted at 45.7-cm (18-inch) spacings, alternating three plants across a single row. Perennial companion plants were mulched with 5 cm (2 inches) of composted, shredded pine bark mulch (Ohio Mulch, Columbus, OH) and dual dripline-irrigated (T-Tape Model 505) as needed to maintain turgidity. Weed management was conducted initially on a weekly basis by hand-removal until establishment of P. nodiflora as a living mulch occurred, at which point weed management was conducted in the perennial companion plant rows only, as needed. Perennial plant species were all in flower or beginning flowering when planted to the field and flowered throughout the cropping cycle, with the exception of Eysenhardtia. texana. E. texana began flowering sporadically within a few weeks of planting; then, it did so more consistently during the second growing season.

Cucumber yield data were collected during a 3-week harvest period during Fall 2016, Spring 2017, and Fall 2017 (Table 1). Harvest time periods were initiated when a majority of plants contained mature fruit. All cucumbers with a length more than 12.5 cm were harvested by hand and categorized by grade according to their diameter and length (Fig. 1D) in accordance with the USDA grades for cucumbers (USDA, 2016). Total yield was recorded for each plot, and marketable yield was obtained by summing the fresh weight of cucumbers from all USDA grades; the remaining ones were classified as culls.

Habanero pepper yield data were collected during a 3-week harvest period during Fall 2016 and Spring 2017 (Table 1). An unexpected early frost prevented a complete harvest of habanero in Fall 2017; therefore, those data were omitted from the analysis. Harvesting time periods were initiated when a majority of plants contained mature fruit. Habaneros were harvested by hand and categorized by grade in accordance with the USDA grades of peppers (USDA, 2016). Total yield and marketable yield for each plot were obtained by summing the fresh weight of habaneros from all USDA grades, with the remaining classified as culls.

Cucumber and habanero yield data were analyzed separately. A randomized complete block design was used with pollinator-attracting treatment and harvests as the main effects. Raw vegetable yield consisted of measuring yields from each plot without making any adjustment for the space used for perennial pollinator attractants. Annual and control treatments represented yields from 83.6 m2 (900 ft2), whereas perennial treatments represented yields from 55.7 m2 (600 ft2) due to the space required for the perennial pollinator attractants. In our model, it was reasonable to assume that pollinator effects would extend to both sides of a pollinator-attracting row. Therefore, adjusted yield consisted of yields compared for assumed perennial row effects of two adjacent crop rows on each side rather than a single side of the perennial pollinator-attracting companion plants, as tested. These values assumed that one in five rows was used as a perennial pollinator attractant. Raw yields were recorded on a total kilogram basis initially and subsequently converted to a kilogram-per-hectare basis for ease of comparison with small-scale commercial production systems. Higher-order interactions involving blocks and block effects were tested first. When not significant, block effects were omitted from the model. Then, interactions among pollinator-attracting treatments and harvests were tested. If interactions were not significant, then main effects were tested on data pooled across the nonsignificant factor. When effects on yield were found to be statistically significant (α=0.05), the Tukey least-square means tests were performed for means of pollinator-attracting treatments within a harvest (JMP 13; SAS Institute, Cary, NC).

Effects of pollinator-attracting annual or perennial companion planting treatments on cucumber and habanero pepper total raw yield per plot converted to kg/ha in comparison with control plots without companion plants.

Effects of pollinator-attracting annual or perennial companion planting treatments on cucumber and habanero adjusted total yield per plot to kg·ha−1 in comparison with control plots without companion plants.

No significant differences in yield were found among treatments in Spring 2016, regardless of adjustment, which may be attributed to the pollinator abundance already being at a sufficient level across the landscape for adequate pollination without the need for pollinator-attracting companion plants. For instance, Quinn et al. (2017) reported that cucumber yield was largely unaffected by the addition of pollinator-attracting species. However, their data were only obtained during spring harvests, which may explain the similarities with our results in the spring and the differences from our results for cucumber yields in the fall.

Habanero yields were generally consistent with the results seen for cucumbers in response to pollinator-attracting companion plants (Tables 2–4). As with cucumber crops, yield measures were significantly affected (P < 0.05), but no effects attributable to pollinator-attracting companion plants were seen for the fruit quality measures of cull percentages or mean fruit mass (Table 2). In Fall 2016, there was a significant difference (P < 0.05) in yield among pollinator-attracting companion plant treatments in habanero raw total yield (Table 2) and in raw and adjusted marketable yield (Tables 3 and 4). Similarly, in Fall 2016, a significant difference in raw yield was present between annual companion planting treatments and the control and perennial treatments, with the annual plantings treatment ranking highest, followed by the control and perennial treatments, respectively. When adjustments to yield for space occupied by perennial plantings were factored into the analysis, no differences were found among perennial and control treatments for the habanero crop in Fall 2016 (Table 4).

Benefits associated with the additional pollination and ecosystem services resulting from the year-round presence of the perennial plantings on other crops during the year or long-term pollinator populations were not determined in this study, but they also represent potential tangible benefits of perennial companion plantings. The goal of this study was to investigate from a horticulture perspective (not one focused on entomology) whether crop yield can be reliably increased by the addition of pollinator-attracting crops (Haaland et al., 2011). Similar cross-disciplinary approaches that bring plant and pollinator scientists together may be needed to accurately investigate how plants that attract pollinators can increase the yield of vegetable crops. 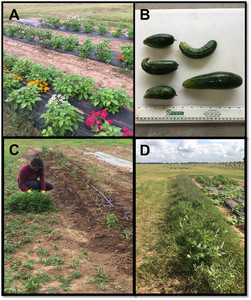